As the Earth approaches a critical tipping point, a reminder about why our biological wealth is critical for health

Earth is rapidly approaching a tipping point, and our quality of life will suffer substantial degradation by 2050 if we continue on our current path, according to a global group of scientists.

The Millennium Alliance for Humanity & the Biosphere recently issued a call to action to the world’s policymakers in this document, A Message to World Leaders: Scientific Consensus on Maintaining Humanity’s Life Support Systems in the 21st Century. Information for Policy Makers.

“By the time today’s children reach middle age, it is extremely likely that Earth’s life-support systems, critical for human prosperity and existence, will be irretrievably damaged by the magnitude, global extent, and combination of these human-caused environmental stressors, unless we take concrete, immediate actions to ensure a sustainable, high-quality future.” 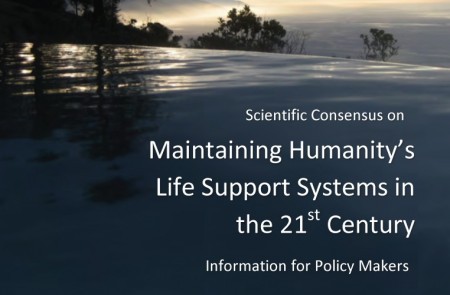 The key areas of concern outlined in the document are: climate disruption; extinctions; wholesale loss of diverse ecosystems, pollution; and human population growth and consumption patterns.

On extinctions, the document states:

“Not since the dinosaurs went extinct have so many species and populations died out so fast, both on land and in the oceans…currently at least 23,000 species are threatened with extinction… The world’s plants, animals, fungi and microbes are the working parts of Earth’s life support systems. Losing them imposes direct economic losses, lessens the effectiveness of nature to serve our needs, and carries significant emotional and moral costs….At least 40% of the world’s economy and 80% of the needs of the poor are derived from biological resources”.

The scientists urge concerned citizens to sign this statement endorsing their call to action.

Meanwhile, public health physician Professor Marion Carey argues below that the conservation of our biological wealth is critical for the sake of our health.

Self interest: a sound reason for protecting our biological life support systems

But how many of us will gave it a thought? How many of us understand what biodiversity means? Why should we care?

Biodiversity is the number, variety and variability of living organisms on the planet. There is genetic, species, and ecosystem diversity. Ecosystems comprise communities of plants, animals and microorganisms, and their interactions with one another and the physical environment.

Australia has about ten precent of the world’s biodiversity, with a unique evolutionary history.   More than 80 per cent of the country’s flowering plants, mammals, reptiles and frogs are unique to Australia, along with most of its freshwater fish and almost half of its birds.

Yet the record of extinctions in Australia has not been a proud one, and we have a long list of critically endangered species.

The last Christmas Island pipistrelle, a tiny Australian bat, recently became extinct but would most people in the hustle and bustle of their daily lives see that as important?

Personally I don’t hold much hope for this argument, despite its appeal. I think we should care, and be taught to care out of self-interest – the self-interest of own survival, health and well-being.

We spend so much time caring about our financial wealth – we are fixated on it. Yet biodiversity represents our biological wealth. It provides a wide variety of life supporting ecosystem services upon which we depend for our health, economy and survival.

We have long been relying on the resilience of these natural systems to support us, but we have now severely depleted them, leaving us with a much more uncertain future.

Biodiversity is an insurance policy for our ecosystems, providing stability and resilience with the ability to adapt in the face of changing environmental conditions.

The reality, as described eloquently by some eminent Harvard physicians, is that “human beings are an integral, inseparable part of the natural world, and that our health depends ultimately on the health of its species and on the natural functioning of its ecosystems”.

Let’s take a couple of examples – food and water security and mental health.

Natural vegetation regulates the hydrological cycle and is very important for fresh water quality and quantity. As water flows over the land, trees hold the soil, retain nutrients, prevent erosion and allow water to seep more slowly into the earth and the release back into the atmosphere is controlled through transpiration. Forests can affect local microclimate and can increase local water supply.

Water filtration and purification is especially important for the prevention of waterborne disease in humans. Loss of biodiversity around waterways leads to loading of waterways with pathogens and nutrients. This may lead to contaminated drinking water, or blooms of harmful blue-green algae which produce a range of toxins, making water unfit for human use.

Estimates of the financial worth of such services of the Catskills mountain forest catchment for New York City, for example, have been valued in billions of dollars.

The 157,000 hectares of forest that protect Melbourne’s water supply have been called “a priceless legacy”, ensuring some of the best drinking water in the world. In the absence of such systems, more extensive and expensive artificial treatment facilities would be required.

Diets based on a diversity of food species promote good health.  In the space of a week at least 20 to 30 biologically distinct types of food are needed for good human nutrition.

While about half of childhood deaths in the developing world are due to under nutrition, in countries such as Australia, poor nutrition is linked to chronic disease with increases in hypertension, serum cholesterol, obesity and some cancers.

Many crops are dependent on specific natural pollinators for fertilisation yet bee populations in many countries have been decimated. In Australia, natural vegetation is important for both commercial and native bees, providing essential nectar and pollen.

Climate change is having severe impacts on ocean ecosystems – through both acidification and warming. This in association with other stressors will have significant impacts on fisheries, a major source of protein and other nutrients for the human diet.

An estimated 500 million people globally depend for their daily existence on coral reefs – marine species provide 17% of animal protein consumed by humans. Yet the predictions are that CO2  concentrations of 450ppm will largely eliminate carbonate coral reefs as we know them.

A large body of evidence is accruing on the health benefits of contact with natural environments.

These physical and psychological benefits include facilitation of exercise for cardiovascular health, improvement in concentration, benefits for children’s cognitive development and reductions in anxiety and depression.

Spending time in with nature is being increasingly promoted as an antidote to our stressful urbanised lifestyles: “Feel blue? Touch green!”

Perhaps it is our evolutionary wiring that makes us seek out connections with other living things, even beyond what is required for our basic needs, soothing our mind and spirit.

The popularity of gardening, bird watching, visiting zoos, snorkelling, diving, bushwalking, nature retreats, swimming with dolphins, whale watching, and so on, testifies to the value of natural species to human wellbeing.  In fact, the increasing isolation of children from the natural world has been coined “nature-deficit disorder” and sparked community movements to reconnect people with nature at an early age.

So let’s spare a moment to consider biodiversity, and how (whether we want to admit it or not) we are locked into the intricate web of life on this planet, dependent on other species.  Let’s protect our biological life support for our own sake.

• Dr Marion Carey is a public health physician specialising in environmental health. She is an adjunct associate professor at Monash University.

• Bob Brown’s call for the Tarkine wilderness in Tasmania to be protected (The Guardian).

• The latest news wrap from the Climate and Health Alliance.

• Dire predictions that hundreds of millions of people will be displaced from their homelands in the near future as a result of global warming, from economist and climate change expert Lord Stern; while the Prince of Wales has criticised “corporate lobbyists” and climate change sceptics for turning the earth into a “dying patient” (both articles in The Guardian).

• Meanwhile, in Australia, the debate about climate change remains stuck on “controversy over a carbon tax” rather than the “extreme danger” facing the land, oceans and biosphere, according to ANU scientist Andrew Glikson (The Conversation).

• A report by Greentech Media outlines recent innovations in energy efficiency, while a commodities report by Deutsche Bank suggests that the coal market is under threat internationally from “a major shift in rational decision making about energy supply and demand” (Renew Economy).

On a personal note, I’ve had the great good fortune to spend the past four days as a volunteer on an environmental expedition to remote islands off the coast of Western Australia.

My partner and I joined a dedicated team of environmental workers in late-night forays to spotlight and examine the banded hare-wallaby (Lagostrophus fasciatus) and other delightful little critters whose future is precarious. Once found widely across the mainland, banded hare-wallabies are now confined to a few islands.

This is one of the little animals that we had the privilege of meeting. Their future depends upon us. And vice versa…

PrevPreviousWeekend reading from the interwebs
NextBeyond the “homebirth horror” headlines: some wider questions for the health system (and media)Next