Rural newsrooms: in peril at a critical time. Photographs by Saffron Howden

As the pandemic cuts a swathe through newsrooms, communities will count the toll

*** This post was updated on 31 March with news about the closure of the Torres News, and again on 1 April with more news ***

Rarely has it been more important for communities to have trusted, reliable news sources.

Yet the COVID-19 pandemic is threatening the viability of many media organisations, leading to closures and journalism job losses, as well as calls for government intervention, reports Saffron Howden, a journalist, editor and media literacy advocate.

The impact is likely to be especially profound for rural, remote and regional communities, whose needs are not always well reflected by metropolitan-based media outlets.

Australians are consuming news like it’s going out of fashion.

A desire for updates about the novel coronavirus, combined with swathes of the population working from home, pushed time spent on news digital sites and apps up by roughly 29 percent for March, compared to the same period the previous month. The Nielsen Digital Content Ratings found young people in particular were increasing their news consumption.

In the United States, devouring news is becoming a national pastime — across websites, apps, social media and TV. Like many others around the globe and locally, The New York Times is sharing much of its COVID-19 coverage at no charge. News Corp Australia has even offered limited free digital access to all content on its main mastheads.

But there is a cruel irony at work. While public demand for journalism soars, the business of news has never been more precarious.

The advertising market is collapsing. And it’s hitting hardest where reliable, quality news is needed most — in rural communities.

“This job was literally everything to me,” journalist Brooke Littlewood tweeted on March 24. “It gave me purpose and was the reason I got up every morning.” The Sunraysia Daily decided to stop the presses indefinitely. The Mildura daily newspaper in Victoria was meant to celebrate its centenary this year.

Within days, Broken Hill’s Barrier Daily Truth in western NSW splashed with the news that it, too, was ceasing publication. Latrobe Valley Express in Victoria’s Gippsland region reportedly stood down its journalists and moved to producing only a small paper with skeleton staff. The Yarram Standard and Great Southern Star, also in Victoria, told their readers they would stop their print editions.

Privately, employees of other publications have told Croakey they are reducing staff hours and numbers — and preparing for worse. Many are cutting back pages and ploughing on for as long as they can.

There are about 2,340 regional journalists across the country, University of Canberra’s Assistant Professor in journalism Dr Caroline Fisher told Croakey. That’s a lot of jobs, especially for the domestic media industry and even more so for that sector in rural Australia.

More importantly for the communities they serve and civil society generally, these reporters produce stories for local media outlets that sometimes function as the main source of news for thousands of towns and regions. There are 540 regional newspapers listed in the Telum Media database and that list is not exhaustive.

The UTS-based Centre for Media Transition found in a 2019 study that two in five regional consumers bought a printed newspaper at least once a week.

Some of Australia’s rural newspapers have been printing for over 100 years. They are often owned by local families and form the backbone of the community, bringing together local business, politics, social life, and entertainment.

More than a business

They sponsor sporting teams and neighbourhood charities and provide a space for the exchange of ideas. Crucially — especially as the world battles COVID-19 — the local paper is a regular, reliable source of information for residents.

If they close it’s not just business, it’s personal. Reporters who have been laid off have told Croakey they are offering to work for free to keep the flow of news to fellow residents.

But with the overnight disappearance of advertising revenue, rural printing presses are falling silent. And in the quiet of the empty newsrooms a vacuum in civil society is forming — one all too easily filled by rumour, fear, confusion, and social isolation.

“The only place that a local community gets the news about themselves, their families, their local governments and local sport is their local newspaper, because nobody else does it,” Latrobe Valley Express and Gippsland Times manager Bruce Ellen told the ABC.

“If we lose our newspapers, we lose community.”

And if you thought the COVID-19 news crisis was confined to local newspapers, think again.

Schwartz Media, which publishes The Saturday Paper and The Monthly, sent an email to subscribers on March 26 warning that both publications “have lost almost all their advertising revenue in the fallout of the crisis”.

News Corp Australia has warned job losses are on the way. And the publisher of Crikey, Private Media, has asked staff to take pay cuts, with the possibility of redundancies around the corner.

It’s a story repeated across the globe.

BuzzFeed staff were being asked to take pay cuts and the CEO, Jonah Peretti, vowed to forego a salary “until we are on the other side of this crisis”, reported Daily Beast.

CNN Business suggested in late March that the coronavirus was “speeding up the collapse of local newsrooms”, citing layoffs and closures around the US. “The last thing they needed was a pandemic,” reporter Kerry Flynn wrote. “The bitter irony of it is that the hit to revenue and jobs is coming at a time when readers urgently need these papers for reliable information about coronavirus in their own communities.”

Prior to the pandemic “news deserts” were already appearing around Australia. Newspaper closures over a decade left 21 local government areas without a single paper or news site, according to the Australian Competition and Consumer Commission (ACCC). Sixteen of these were in regional areas.

Of course, the ABC has a large network of regional bureaux and reporters around the country. But, while their work is essential and highly valued — increasingly so — they are not sufficiently resourced or plentiful enough to fill the huge gap left by local newspapers. Nor should they have to be. The same applies to the regional TV networks, such as Prime7 and WIN.

Rural publishers have called on the Federal Government to release an estimated $40 million from the Regional and Small Publishers Jobs and Innovation Package to help get them through the effects of the pandemic.

The Public Interest Journalism Initiative wants that figure raised to $100 million and public service advertising increased in local news media over the next three months by at least $100 million.

The newspaper owners who’ve had to cut, cancel, and stand down in recent weeks hope to re-open for business in full after the COVID-19 crisis has passed.

But we must count the cost of their absence in the meantime. And confront the frankly terrifying possibility some rural printing presses may stay silent for a very long time, if not for good.

• Saffron Howden is a journalist, editor and media literacy advocate. She was a Google News Initiative Teaching Fellow for Australia & NZ, travelling to rural and regional newsrooms to provide digital news training to almost 1,000 journalists. She was also the co-founder of the national newspaper for children, Crinkling News. 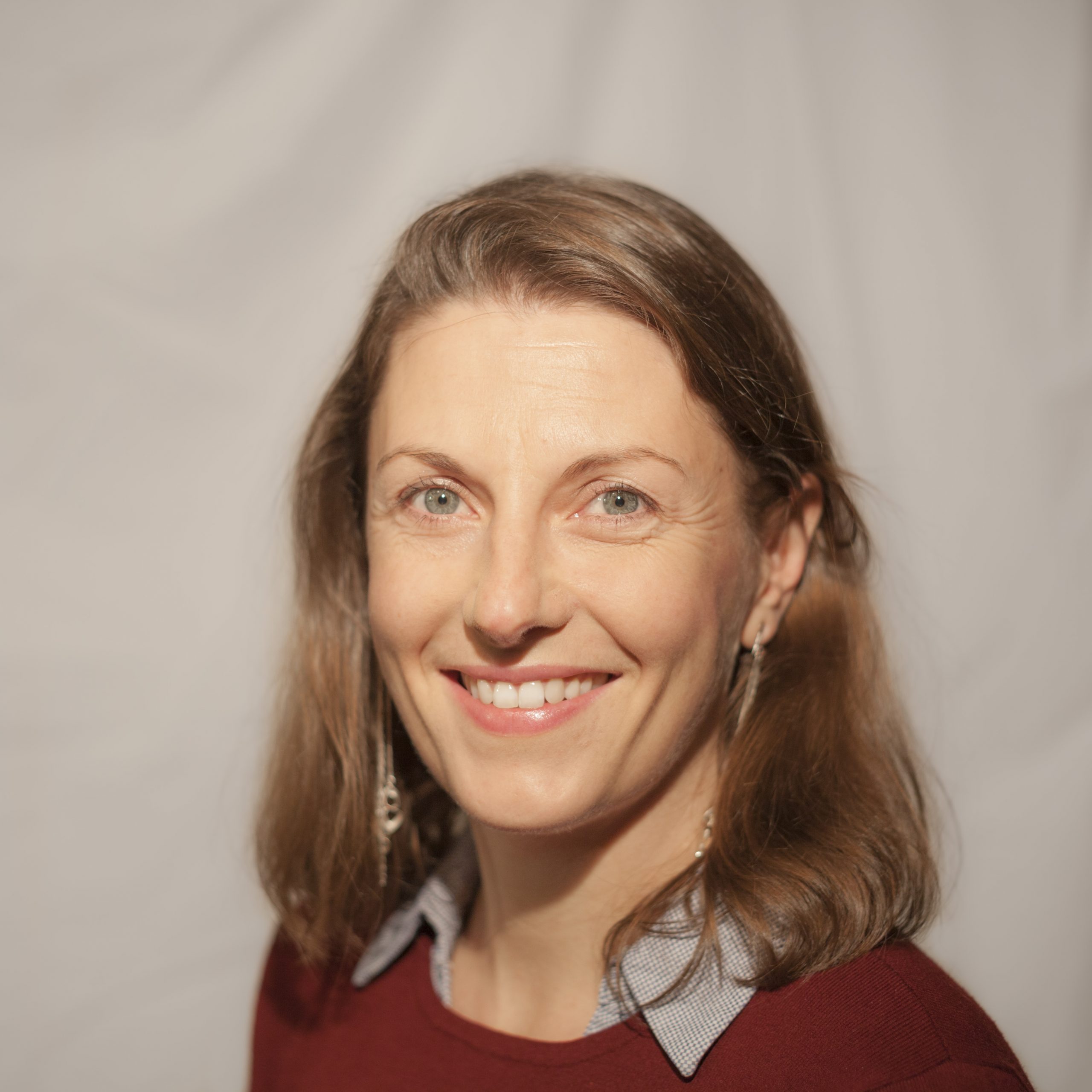 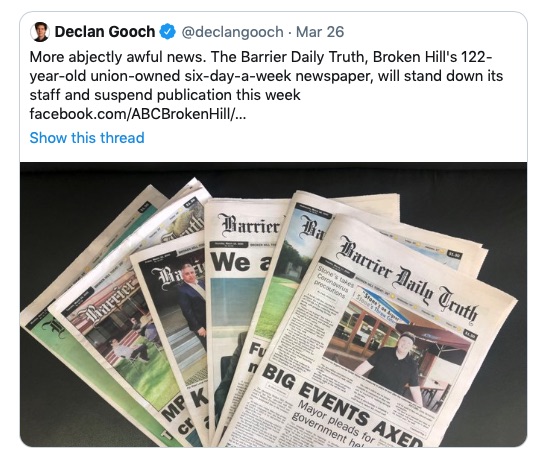 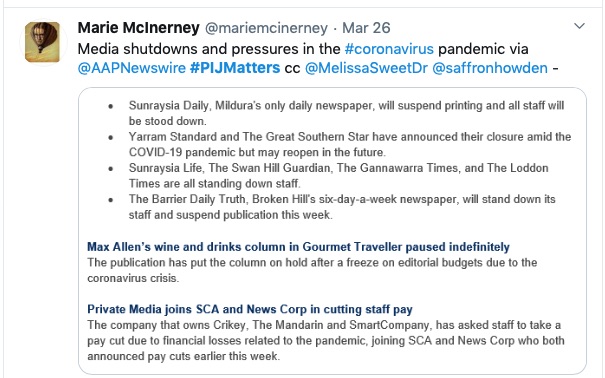 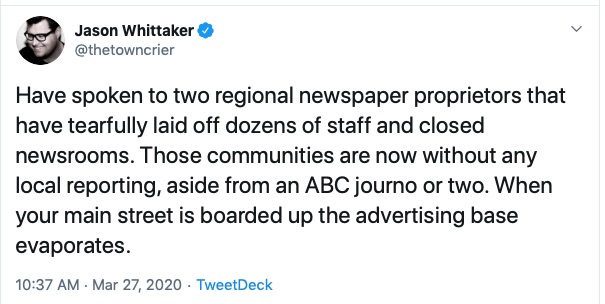 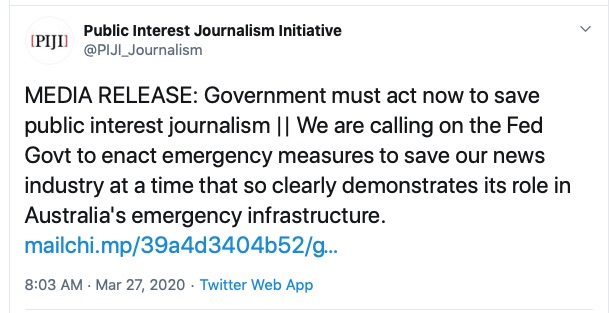 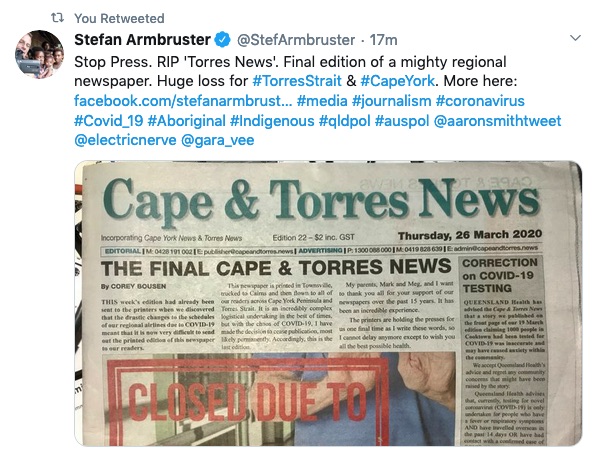 The final edition of a mighty fine paper came out this week. It’s a huge loss for the Torres Strait and Cape York communities, who have relied on its voice to hold governments to account and tell the stories that helped maintain cultural and social life in Queensland’s far-north.

After more than 60 years of survival, coronavirus has brought it to an end.”

From Wikipedia: The Bunyip is a weekly newspaper, first printed on 5 September 1863, and originally published and printed in Gawler, South Australia. Its distribution area includes the Gawler, Barossa, Light, Playford, and Adelaide Plains areas. 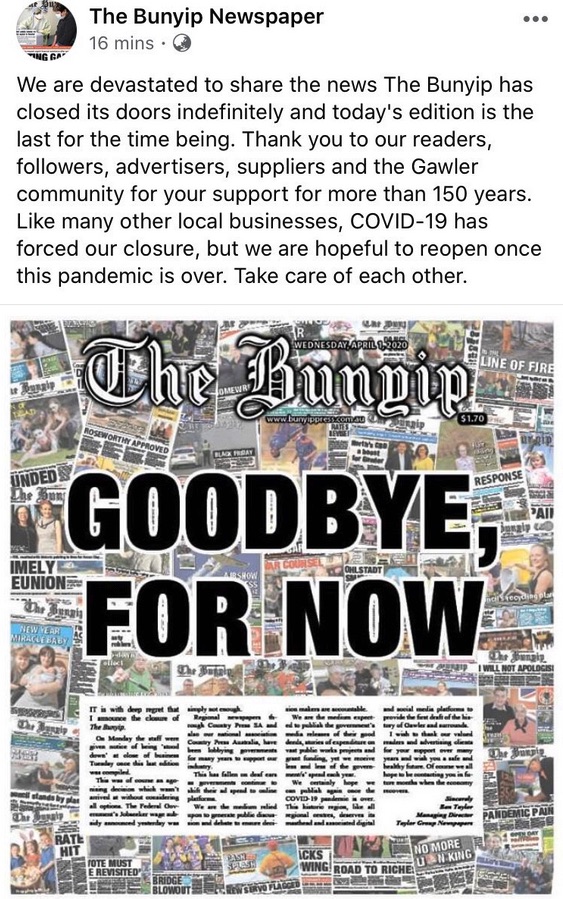 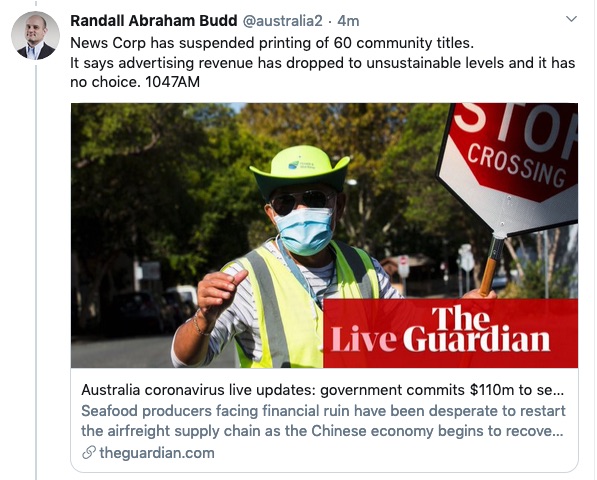 See the announcement from News here.

The Judith Neilson Institute announced three new initiatives to support media organisations and journalists during the disruption caused by the COVID-19 pandemic: funding for freelancers and casual contributors, a free news service for Australia’s 450 community radio stations, and help to tackle misinformation on COVID-19, including on social media.

The Journalism Education and Research Association of Australia issued a statement urging the Australian Government to deliver emergency funding to help redress the impact of COVID-19 on the local news industry, particularly in regional and remote areas.

PrevPreviousReflections from quarantine, on this time as an opportunity to help others
NextAs special protections urged for remote communities, Aboriginal health workers call for full scope of practiceNext