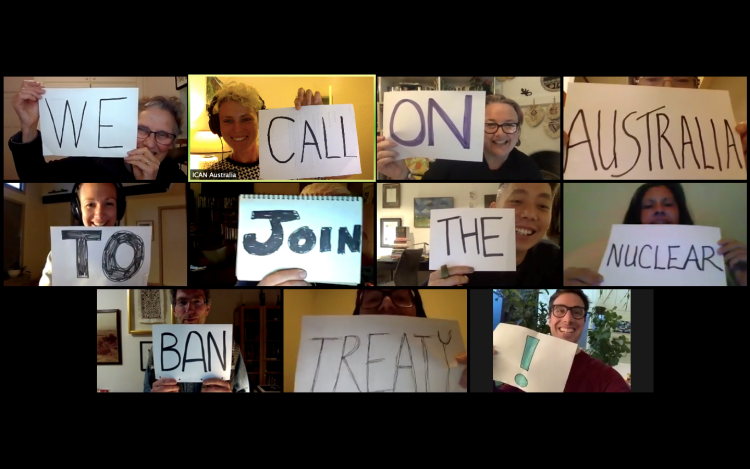 Nuclear ban advocates urge Australia to join the Treaty on the Prohibition of Nuclear Weapons.

As UN nuclear ban treaty enters into force, time for Australia to address its role and history

** WARNING: Aboriginal and Torres Strait Islander readers are warned that this post contains the image of a deceased person **

On October 24, 2020, the UN Treaty on the Prohibition of Nuclear Weapons reached the required 50 states parties for its entry into force, after Honduras ratified just one day after Jamaica and Nauru submitted their ratifications.

In 90 days, the treaty will enter into force, cementing a categorical ban on nuclear weapons, 75 years after their first use.

It’s the result of decades of campaigning, including by the International Campaign to Abolish Nuclear Weapons (ICAN), which had its origins in Melbourne and was awarded the 2017 Nobel Peace Prize for its efforts towards a ban.

But as well as the nuclear nations, which have campaigned against efforts for a ban, it is missing another obvious signature.

ICAN Australia board member Dr Ruth Mitchell writes below about reaching the historic milestone:  what does it mean, why does it matter, and where is Australia’s commitment to a world free of nuclear weapons?

Croakey readers may also be interested in this article by ICAN founding member Dimity Hawkins, on the need for nuclear justice for the Pacific.

She writes that the 315 nuclear weapons tests conducted through the latter half of the 20th century by so-called “friendly” or colonising forces in the Marshall Islands, Kiribati, Australia and Maohi Nui (French Polynesia), have left behind “not only harmful physical legacies but psychological and political scars as well”.

As this previous Croakey story also reports, US nations negotiating the treaty in New York in 2017 heard directly of the ongoing impact of such tests from Karina Lester, daughter of the late Yankunytjatjara Elder Yami Lester who was blinded by the ‘black mist’ tests conducted by the British at Maralinga and Emu Field in the 1950s.

Sunday morning in Melbourne I woke to the news that Honduras had ratified the Treaty on the Prohibition of Nuclear Weapons (TPNW). Honduras will go down in history as the 50th country to ratify the TPNW, beginning the 90-day countdown until this landmark treaty enters into force.

Living in a city still in lockdown due to the COVID-19 pandemic, missing loved ones and waiting for the lifting of restrictions, this news was such a gift.

Two days earlier, ambassadors and ICAN campaigners from around the world gathered online to celebrate TPNW ratifications by Jamaica and Nauru.

We heard from Japanese-Canadian nuclear disarmament campaigner Setsuko Thurlow, who was just 13 when she survived the atomic bombing of Hiroshima.

She spoke of all those who have died, because of the use and testing of nuclear weapons. Hibakusha like Setsuko Thurlow have born witness, all these years, to the destructive power of nuclear weapons, and they have been waiting, for over seven decades, for the world to wake up to the evil of these weapons and eliminate them forever.

The Japanese word ‘hibakusha’ is a generally used to refer to people affected by the 1945 atomic bombings of Hiroshima and Nagasaki, but in her remarks on Friday, Setsuko Thurlow extended the term in solidarity as she spoke of why the TPNW is so important to her. She said:

I also want to acknowledge how moved I am that in the preamble to the treaty, hibakusha are identified by name. This is the first time in international law that we have been so recognised.

We share this recognition with other hibakusha across the world, those who have suffered radioactive harm from nuclear testing, from uranium mining, from secret experimentation.

And furthermore, the treaty recognises that Indigenous people have been disproportionately affected by the production of nuclear weapons.

We in hibakusha and Indigenous communities uniquely understand that not only the use of nuclear weapons in war but also the testing and production of nuclear weapons causes death and unspeakable suffering through invisible radioactive contamination.

And here the treaty recognises that women and girls are more susceptible to the effects of radiation – that there are gendered implications to radioactive violence.”

The plan for the TPNW began with the launch of the International Campaign to Abolish Nuclear Weapons (ICAN), in Melbourne, Australia in 2007.

It was birthed from within the Medical Association for the Prevention of War (MAPW) and endorsed by the International Physicians for the Prevention of Nuclear War (IPPNW) which accelerated the spread of the campaign across the world, and there are now 570 partner organisations who share the vision for a world free of nuclear weapons and are working to make this a reality.

As ICAN has grown, the vision has coalesced into the TPNW, which addresses a legal gap in international law.

Until now there have been treaties banning biological and chemical weapons, land mines and cluster bombs, but no overarching treaty making the possession, use, or threat of use of nuclear weapons illegal.

The exact wording in the treaty was negotiated at the United Nations and adopted on July 7, 2017, with 122 states voting in favour, one vote against, and one abstention.

Now that the 50th country has ratified, from 22 January 2021, all state parties will have to comply with both the prohibitions and positive obligations of the treaty, including assistance to victims of nuclear weapons use.

Importantly, the TPNW will impact the industry that surrounds nuclear weapons. Banks, superannuation funds, and insurers will divest from companies that invest in nuclear weapons. This is divestment has already begun. Once the treaty has entered into force, it will be difficult for financial institutions to argue for continued investment in these weapons of mass destruction. Nuclear weapons have always been immoral. In three months, they will also be illegal.

Along the journey towards this pivotal treaty, ICAN was honoured with the Nobel Peace Prize in 2017, “for its work to draw attention to the catastrophic humanitarian consequences of any use of nuclear weapons and for its ground-breaking efforts to achieve a treaty-based prohibition on such weapons.”

Both on that day in December 2017 when we gathered in Oslo to receive and celebrate this singular honour, and today, when I feel the incredible weight of history, I am especially moved by the memory of those who are no longer with us, the hibakusha who have died, and of so many prominent leaders in our movement who did not live to see this day.

I think of Yami Lester, a Yankunytjatjara man, who survived British nuclear testing in the South Australian desert as a young boy and was blinded by a “black mist” from the south. He battled his whole life for justice for the Aboriginal communities affected by those nuclear tests. He passed away in July 2017, but not before his eldest daughter, Karina Lester, told his story to the United Nations conference negotiating the TPNW.

The Nobel Prize belongs to them.

And it would be impossible for me think back on where we have come from without remembering Dr Bill Williams (see this tribute published at Croakey). Larger than life, Bill was the very heartbeat of ICAN. He was a GP in Torquay, an author, a surfer, an advocate and campaigner, a founder, a leader, but most importantly, he was our friend. He understood in his bones that without a groundswell of public opposition (GOPO) we would never be able to get rid of nuclear weapons. We’ve got the GOPO fired up, but we really miss Bill.

When your country is not in the room

Given the terrible legacy of nuclear racism, with repeated British nuclear testing on unceded, sovereign Aboriginal land, it is particularly galling that the Australian government has failed to ratify, or even sign the TPNW. As Karina Lester said of the time of her address the United Nations, “It was disappointing as an Australian person to speak about what happened in your own backyard, when your country wasn’t in the room. There is an opportunity for nations to get together and completely ban nuclear weapons, instead of spending trillions of dollars to improve their technology.”

As we countdown the 90 days, I am encouraged by the statement from Australian Labor Party leader Anthony Albanese and Senator Penny Wong welcoming the 50th ratification and committing to signing and ratifying the treaty.

Let us honour our Aboriginal elders, our Pacific neighbours, and the victims and survivors of Hiroshima and Nagasaki. Australia must join the Treaty on the Prohibition of Nuclear Weapons. We must eliminate nuclear weapons, or they will eliminate us.

You can watch an ICAN video celebrating the milestone here.

Dr Ruth Mitchell is a neurosurgeon and PhD candidate at the University of Melbourne and WEHI. She is co-chair of the board of ICAN Australia.

Disclaimer: Marie McInerney, who edited this piece, is a former Board member of ICAN.

PrevPrevious“This is just taking off”: UK, Victorian experts on outlook, lessons for COVID-19
Next“Look after the house so the spirit can enjoy life”: stories of hope and harm from the Aged Care Royal CommissionNext