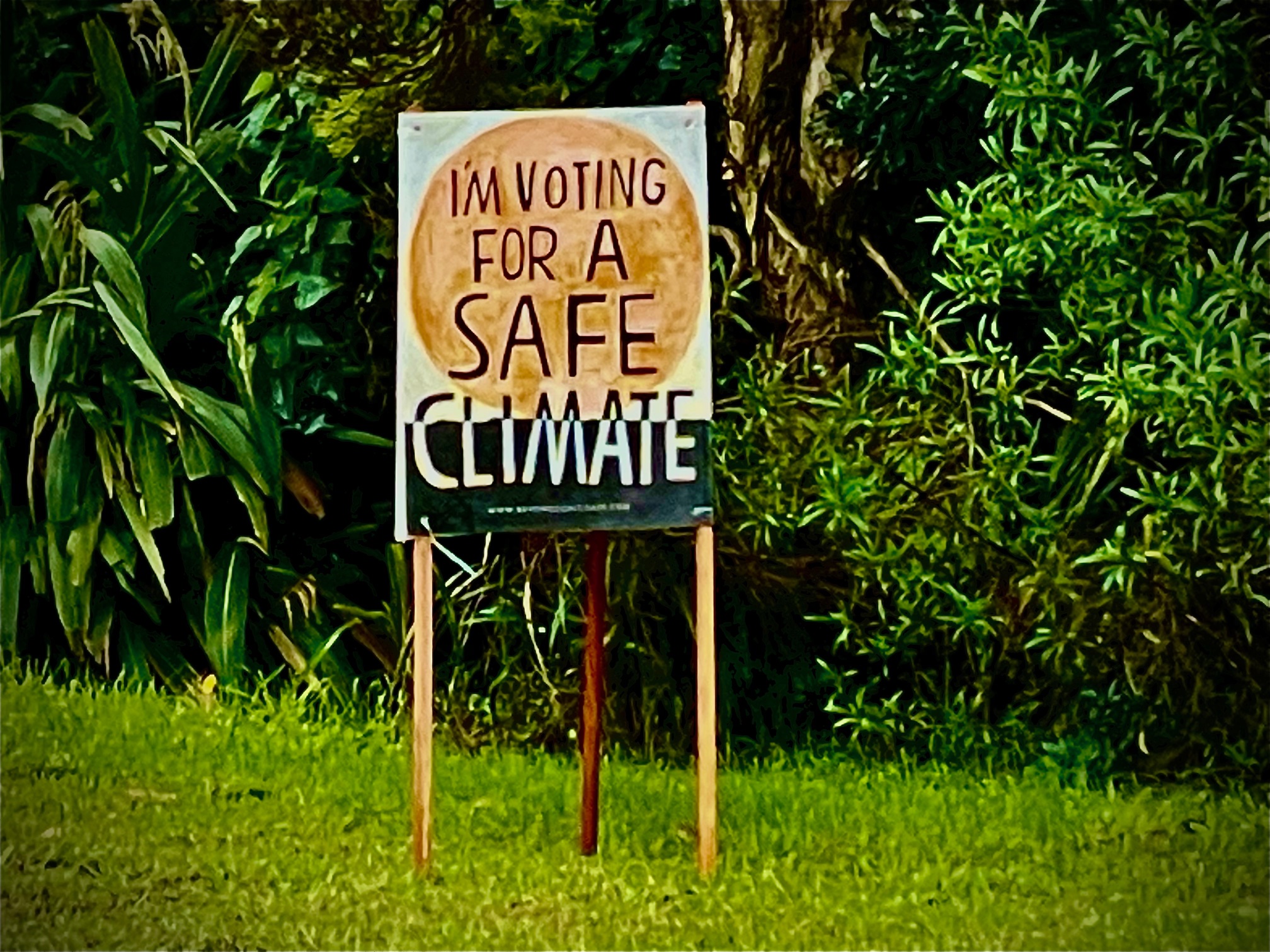 Sign outside a house in Coledale, north of Wollongong, photographed 27 April, 2022. Dharawal Country.

Introduction by Croakey: Almost two-thirds of more than 10,000 people who replied to a poll by The Conversation nominated climate change as their number one issue in the lead-up to the federal election.

Yet this global health threat has had relatively little mainstream media scrutiny during the election campaign, with much of the media’s focus limited to the longstanding, painful and unproductive climate wars between and within the major parties.

A webinar hosted by Croakey this week heard from a stellar line-up of speakers, with discussions moderated by Dr Norman Swan and a focus on the importance of prioritising Aboriginal and Torres Strait Islander people and knowledges, and of listening to communities’ concerns and experiences.

It came as a new report by the UN Office for Disaster Risk Reduction predicted that by 2030, the number of global disaster events will reach 560 a year – or 1.5 disasters a day.

Panelists at Croakey’s webinar on climate, health and the federal election made an urgent call for political leaders to listen to First Nations’ voices and learn from 70,000 years of experience in caring for Country to address the climate crisis.

Epidemiologist Associate Professor Ying Zhang said Australia lagged behind other high-income countries in responding to climate change and there was still no national plan to address climate and health.

Key elements of a national plan should include mitigation, adaption, engagement and capacity-building and be developed by “hundreds of health professionals” from multiple sectors. First Nations’ people should be at the centre of this decision-making, with more funding required to support climate and health research and initiatives, Zhang said.

Climate change was just one indicator of the collapse of multiple systems including water and agriculture, fuelled by factors such as over-population, chemical and microbiological threats.

“We tend to focus on climate change, so it’s getting warmer, we’ve got accumulation of methane and carbon dioxide in the atmosphere, we think about sea level rise.

“But climate change is just one part of a much larger picture, which is really much more profoundly worrying . . . because wherever you look in the environment and in the world and on the land on which we live, systems are collapsing.

“The First Nations’ concept of land, of belonging and of ownership and custodianship of the land are critical elements to start solving the problems of this multiple systemic stress that we are living under, and it’s speeding up.”

A report from the United Nations released on Tuesday underlines the risk of disasters caused and systems collapse caused by human activity and behaviour, projecting that the world will face 1.5 disasters a day by 2030.

The Global Assessment Report Report (GAR2022) said the scale and intensity of disasters was increasing, leading to more deaths and injuries and disproportionately affecting developing countries, which lose on average one percent of GDP a year to disasters, compared with 0.1 to 0.3 per cent in developed countries. The Asia-Pacific region is most severely affected, losing 1.6 percent of GDP to disasters each year.

Extreme weather events from climate change is a growing risk, with the report calling for the acceleration of adaptation efforts made at COP26.

Dr Veronica Matthews, from the Quandamooka community, Minjerribah, said climate change was disproportionately affecting First Nations’ people and the “rolling consequences” could be seen in Indigenous communities all around Australia.

Matthews heads the Centre for Research Excellence – STRengthening systems for InDigenous healthcare Equity (CRE-STRIDE) and lives in Lismore, which was devastated in March and April by the second and third catastrophic floods since 2017. She told the webinar that the effect on local Aboriginal people included the evacuation of the entire community on Cabbage Tree Island, the loss of homes and families cut off from basic necessities like food.

Coming on top of two years of COVID-19 and the 2019-2020 bushfires, Matthews said “there’s a cumulative trauma, so much heartache which is likely to endure for years and so much uncertainty because of our changing climate”. These events were also a magnifier for mental health concerns such as post-traumatic stress, anxiety and depression.

Matthews, who advises on health system reform, was the lead author of a discussion paper, Climate Change and Aboriginal and Torres Strait Islander Health, for the Lowitja Institute released in October 2021 at a landmark climate change roundtable reported on by Croakey.

She said the First Nations’ holistic view of health, where the health of Country is intrinsically linked to the wellbeing of communities, was disrupted by colonisation which had led to the current health and socioeconomic disparities between Indigenous and non-Indigenous Australians.

“Climate change is adding to this. It’s viewed by First Nations’ people globally as an extension of colonisation, because we lack control over what is happening to our country and our ability to practise culture,” she said.

The many impacts, which rarely attracted media attention, included the “slow burn” of extreme heat on the health of Indigenous people in Central Australia and sea level rises in the Torres Strait Islands, washing away livelihoods and thousands of years of culture.

“The good news is we are resilient . . . our culture is about living equitably and sustainably. We play an active role in caring for Country. This is the value of our traditional knowledges, which are both new and ancient,” she said.

Yet, despite calls by the Intergovernmental Panel on Climate Change for scientists to listen to the knowledges of First Nations peoples on climate change adaptation and mitigation, Matthews said Aboriginal and Torres Strait Islander peoples lacked resources and political clout and were sidelined in the debate. “Our voices aren’t being heard,” she said.

A common theme of the webinar was that political parties are not listening to wide sections of the community about their concerns about the health impacts of climate change.

Dr Sophie Scamps, a GP and Independent candidate for the NSW seat of Mackellar, said her community in Sydney’s wealthy northern beaches, felt “ignored, neglected and not represented” about their fears on climate change.

Scamps, like many of the Independent candidates contesting Liberal seats, supports action on climate change, a federal integrity commission, and implementation of the Uluru Statement from the Heart. She told the webinar that if elected she would vote to legislate climate change reduction targets and introduce an independent climate advisory body for government.

Despite growing evidence of the health risks and impacts of climate change, no fundamental changes have been made by the Australian Government to address the issue, according to Associate Professor Ying Zhang from the University of Sydney.

Zhang, a senior epidemiologist, co-chair of the MJA-Lancet Countdown on Health and Climate Change in Australia and founder of the Sustainability, Climate and Health Collaboration, said she was frustrated by the “lack of leadership and commitment of the Federal Government to addressing climate change issues”.

Research by Zhang and colleagues has found that Australians’ health and wellbeing are increasingly impacted by climate change and that Aboriginal and Torres Strait Islander people are disproportionately affected.

Zhang called for urgent policies to address climate change as a health emergency.

“We need climate resilience and an equitable, sustainable healthcare system to better prepare and respond to climate disasters,” she said.

“The cost of inaction on climate and health will greatly outweigh the costs of acting now.

“We want a shared vision towards a more sustainable and healthier future for all and it’s time for change now and we have the right to vote for change, and we have to use that.”

Rikki Dank, a delegate to last year’s COP26 in Glasgow,  is turning to the international stage to bring attention to fracking in the Northern Territory due to a lack of media interest or political support in Australia.

Dank, a Gudanji and Wakaya woman from the Barkly Tableland in the Northern Territory is a Traditional Owner and board member of Gudanji for Country. She shared a powerful story at the webinar of cultural loss from the ongoing fight to protect her Country from fracking.

“It takes a psychological toll on Indigenous people when you see your country destroyed and knowing, or feeling, that you have absolutely no power or control over the destruction,” Dank said.

Dank, who is also a registered nurse, said the feelings of helplessness were compounded by Aboriginal people not being able to continue traditional ceremonies, follow their songlines or visit sacred sites on their Country due to the damage and pollution caused by fracking.

A number of Aboriginal communities in the region, including Borroloola, are impacted by the fracking and Dank said it was devastating “to watch each other suffer”.

The Gudanji community had been “cut out of the equation when it comes to decision-making”, Dank said. She related the “shock and horror” her grandmother experienced when fracking trucks suddenly arrived on Country while she was hunting with her grandchildren. The community had not been consulted or advised that fracking was about to begin. Dank said her grandmother saw her Country handed back in 1999 and now “it feels like it is being taken away again”.

Danks’ husband, Dr Sanjit Paul, commented in the webinar that a significant problem for First Nations’ peoples was the issues of consultation and consent.

“Consultation does not require action and so communities can be consulted, not give consent, and projects get approval anyway,” he said.

“This disconnect between government actions and community concerns and rights will continue to be seen until we legislate climate targets, as proposed, and the rights of First Nations through Treaties.”

Panelists also raised concern about Native Title legislation and processes, and the uncertainties and anxieties caused to Traditional Owners who lose rights over their land.

• Read more insights from Rikki Dank about fracking on her Country in this recent article in Croakey by Lyndal Rowlands, and Croakey’s coverage of the Beetaloo drilling program including the resulting increase in greenhouse gas emissions. 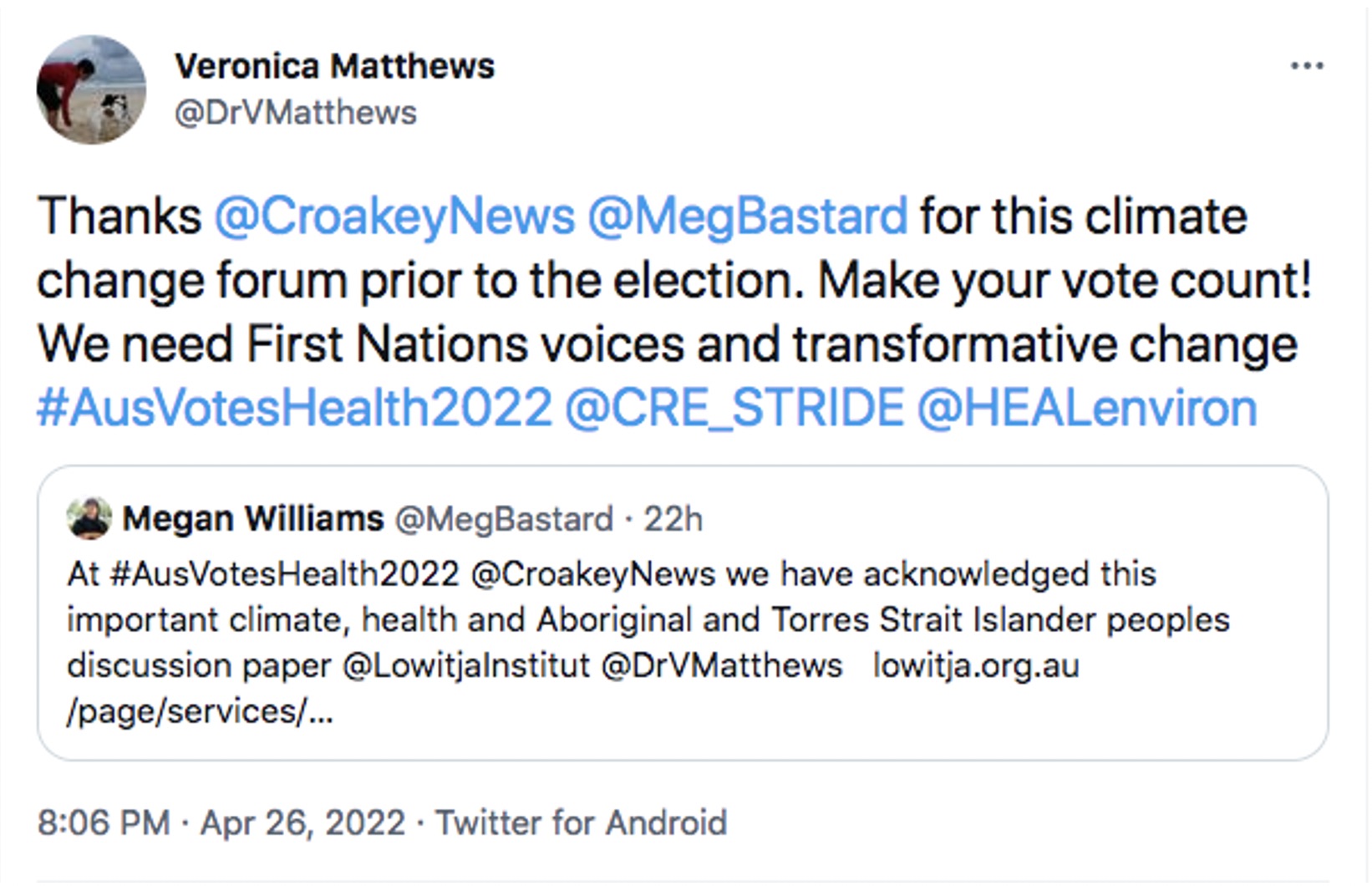 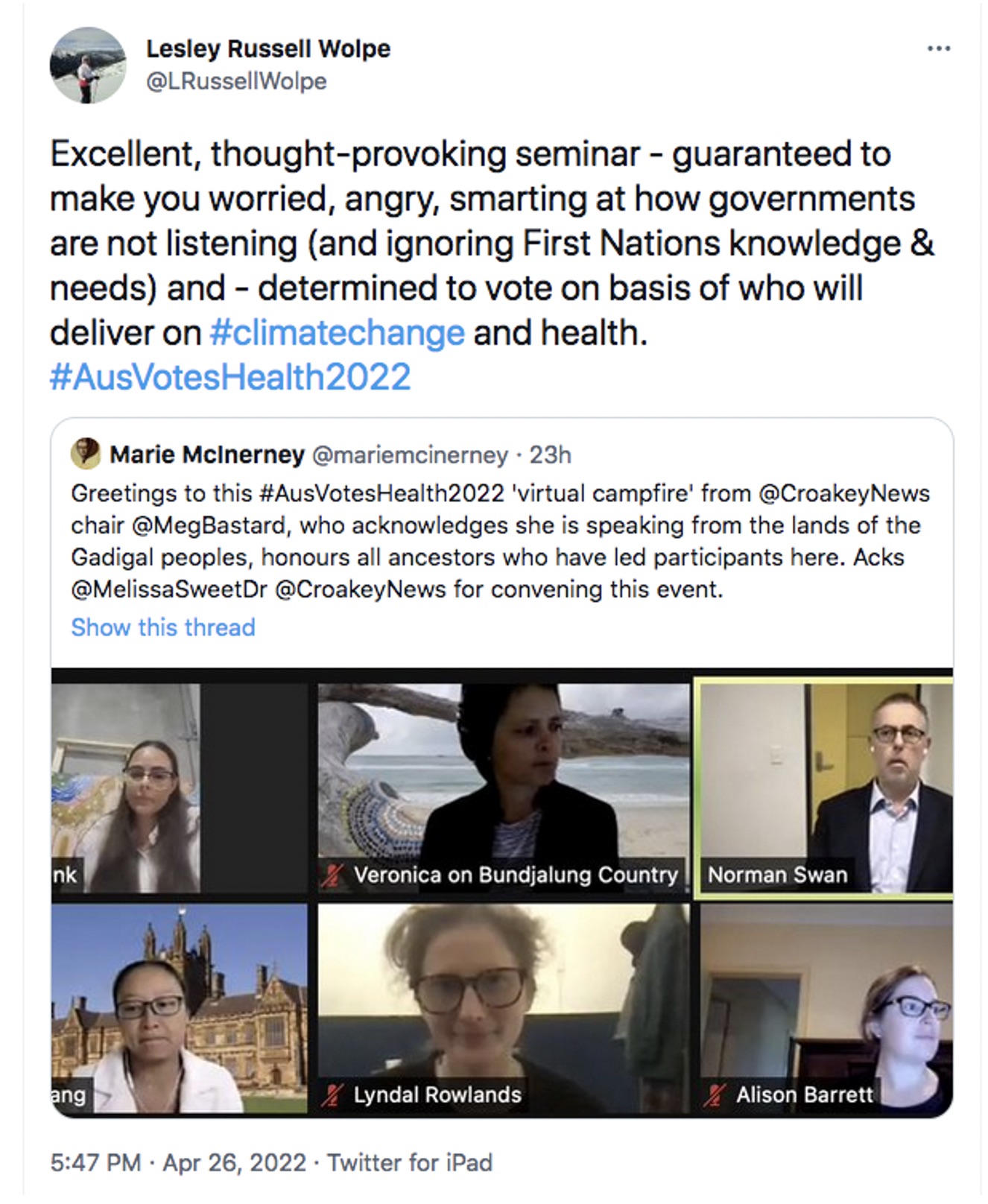 Croakey acknowledges and thanks Tashy Ubeyratne, a global health student at the University of Sydney, for helping organise the webinar. See her Twitter thread summarising the discussions.

Croakey thanks donors to our public interest journalism fund for helping to support this article.

See our archive of stories on the 2022 federal election and health.