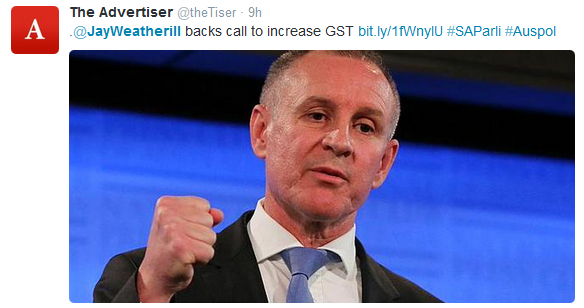 As New South Wales and South Australia launch discussions on the merits of lifting the rate of the GST from 10 to 15 per cent “in order to pay for the increasing cost of healthcare”, they might want first to consider their health care priorities.

Associate Professor Samantha Battams reveals below “a sad state of affairs for public health in South Australia” with the loss of major roles in the Department for Health and Ageing, including the full time Chief Public Health Officer position (see the office’s last report on the ‘state of public health’ in SA).

Premiers Jay Weatherill and Mike Baird might also want to read this #Budget2015 prescription to cut health costs (‘magic cure? prevention’) and the warning from the Australian Council of Social Service (ACOSS) that consumption and other indirect taxes like the GST  are regressive, to the point that we see the bottom 20 per cent of earners pay an average of $38 per week in GST, or 7 per cent of their income, while the top 20 per cent pays an average of $103 per week or 3 per cent of their income. That never bodes well for health.

The contracts of 17 Executive positions in the Department for Health and Ageing (DHA) in South Australia have either not been renewed or were terminated early, some of which are important for public health in the state.

These include the full time Chief Public Health Officer position and the Director of Epidemiology.

Other key public health roles have been flagged as ‘surplus to requirements’, including the most senior Public Health Nutrition role and a strategic research role. Staff in these other roles may be redeployed.  A total of 73.9 FTE positions from the DHA will be reduced, with 24 of these either having new functions or being transferred to Local Health Networks.

The Health Promotion Branch had already been axed during earlier cuts in 2014.

This is a sad state of affairs for public health in South Australia. A great deal of corporate knowledge acquired over many years will be lost due to the exit of a number of highly experienced and committed professionals. This will likely ultimately impact on health promotion and population health measures in the state.

It was only recently that South Australia revised its public health plan associated with its Public Health Act, with consultations being held last year to work on strategies for the new plan. Will the state be able to respond to a public health emergency without committed resources?

Given the dramatic rise in non-communicable diseases worldwide (for example, cancer, cardiovascular disease, diabetes, mental health, respiratory diseases), and Australian government commitment to international strategies to prevent and control non-communicable diseases and their risk factors (over-nutrition/obesity, lack of physical activity, smoking) the moves can only be described as a short-sighted cost-cutting measure.

As Australian health systems come under increasing pressure, what can be learnt from experiences elsewhere?

In locked-down Queensland, community controlled sector rising to the challenge