As we move towards constitutional recognition, what can we learn from Indigenous understandings of health (heaps, suggests one GP)

At the National Press Club today, there was explicit acknowledgement of the power of the five-year-old Prime Ministerial apology in improving the health and wellbeing of Indigenous people.

The apology, which you can read here, was for the “profound grief, suffering and loss” inflicted by “the laws and policies of successive parliaments and governments”.

Tanya Hosch, deputy director of the Recognise campaign for constitutional recognition, and Jason Glanville, CEO of the National Centre for Indigenous Excellence, spoke at the Press Club after the Aboriginal and Torres Strait Islander Peoples Recognition Bill passed the House of Representatives (for more details on this see the links at the bottom of the post).

Jason said the apology had helped many to heal, and that he knew people who were mentally and physically better off as a result of it. He told the Press Club that “over the last 200 years, our society has told Aboriginal and Torres Strait Islander children a story as destructive as it was untrue. It was a colonial fiction of a dying race, a tale of disadvantage and limited potential. And then we came to wonder how it was that such disadvantage became a self fulfilling prophecy.”

The truth, he said, is the opposite of that myth – “the truth is that every Indigenous child in this country is descended from some of the most resilient and resourceful people on the planet. Australia’s founding story is not the failure of a dying race, but a story of ingenuity, creativity, adaptation and survival…It’s a great positive story from which every Australian can draw great pride and inspiration.”

Meanwhile, in the article below, Dr Tim Senior, a GP working in Aboriginal health, has another positive story from which he suggests we could all learn.

If Australia adopted the Aboriginal definition of health, he says we would end up with not only better services, but better health – and more Ministers for Health.

Australia should adopt the Aboriginal definition of health

Professor Sir Michael Marmot (a prominent researcher and international advocate for action on health inequalities) tells a story of meeting the Swedish Treasury minister and asking, “So, who is the health minister?”

“We are all health ministers,” was the reply.

What would it take for this answer to come from an Australian minister?

Could we all consider ourselves responsible for health? I believe we can, and it might only take a recalibration of our conception of health to do this. The answer, in fact, is under our nose!

I suspect that Croakey readers can recite the WHO Definition of health in their sleep:

“A state of complete physical, psychological and social wellbeing, not merely the absence of disease”

Agreed by the WHO in 1946 and implemented in 1948, this definition has not been changed since, though there has certainly been debate about it. This was the definition I was always taught. Each time I read it, it makes me notice an ache in my back, and perhaps some anxiety, and I wonder if I or anyone can ever be healthy.

When I started work in an Aboriginal Medical Service, the Aboriginal definition of health struck me as being much closer to my own perception of what health actually is.

I would like to suggest that Australia should take on this second definition as their operational definition of health in planning and delivering services.

It is often claimed that the two definitions are compatible – for example in the Discussion paper for the National Aboriginal Health Plan. While I don’t disagree, there are at least two fundamental differences that have the potential to impact on the way we think of health for the better.

The first is that the Aboriginal definition makes no mention of disease. (Go on – read it again!) WHO conceive of health as being the absence of disease with some extra wellbeing added. It is (literally) inconceivable in the WHO definition to have a disease and be healthy. This was written in the day when health services were directed at multiple one-off episodes managing acute conditions.

The Aboriginal definition uncouples disease and health. It is actually possible to be healthy with an incurable chronic condition. Death is even part of health, provided people have been given a chance to reach their potential.

The second main difference is the focus. With the WHO definition, the focus is very much on the individual. There is acknowledgement that people can have a sense of social wellbeing, but this is possessed by an independent individual. With the Aboriginal definition, the unit is the community. Individuals exist in this community, and are encouraged to reach their full potential, but there is a sense that context matters.

Does it describe reality?

For many people, there would be an intuitive feel that the Aboriginal definition does describe what they think of as health. We might need a bit more evidence than our intuition, though.  There is a wide and growing recognition of the important role played by factors such as poverty, education, employment, housing, transport and other so-called social determinants play in the health of people.

This recognition has started to see health issues tackled by wider agencies than just those tasked with health. Indeed, spending on social measures rather than health measures improves more health outcomes. There is a clear correlation between inequality in a society and many measures of functioning of that society, including but not limited to, health measures.

In looking at the factors that contribute to wellbeing, people claim these are much more than just their physical health. It includes their relationships, and their ability to control their lives. For example, it has been shown that providing house insulation improves self rated health, and reduces days off school and work  and that proximity to green spaces improves morbidity and self-reported health.

To get a feel for the importance of community and our connection to other people, there are some interesting studies using network theory. Variables as diverse as alcohol consumption,  obesity and happiness cluster together in groups of people – that is you can predict whether someone will have it by whether their friends do. To be fair, the finding that acne, headaches and height can be found suggests these are more than just social network effects, that shared environment also plays a role.

Saying health is based on communities, not individuals is a truism. The only people who might deny this are tobacco companies claiming that smoking is an individual’s choice, and other related arguments. However, even though we know it to be true, we haven’t really got away from providing services just to individuals. Which brings us to the next question.

Does using this definition make a difference to people?

The best place to see this definition of health influence service provision is in an Aboriginal Community Controlled Health Service.

When you visit one, the obvious difference is that there are a wide range of services available. These are not just GP surgeries with a high number of Aboriginal patients. GPs do work there (though not very many!) as do nurses and Aboriginal Health Workers.

Where I work you will also find drug and alcohol workers, financial counselling, ear health, Bringing them Home services, a pre-school, community kitchen, art group, and a men’s group. Working to this definition means providing a much broader range of services than those classically offered in health services. (There are examples overseas of services winning recognition for this sort of approach. And read this on art groups in the elderly for a feel good story – Aboriginal communities have been doing this sort of work for a long time!)

At a deeper level, community control is about more than the provision of services – it is a demonstration of people in a community striving to reach their full potential, by having control over the way a service operates and is run. I would argue that this is the main reason for the success of ACCHOs. Success has been achieved in state government services and private general practice by allowing meaningful control from the local community too.

It might be easier to see the difference with an example.

Imagine a person with type 2 diabetes. Under the WHO definition, health cannot obtained until the diabetes is made to disappear. Health is the absence of disease and more. Knowing we can’t achieve this (though the search continues), we try to control the disease.

Because this definition concentrates on the individual, that’s where our attention is. We think about this as a disease, about pancreases, insulin and insulin resistance. All our efforts are directed at this – the solution is medication concentrating on insulin secretion, on diet and exercise, as a mediator of insulin function and health. We can then label people as “non-compliant” when they don’t do this. They are failing their pancreas! We will direct them to an educator to be educated, send their feet to a podiatrist, their heart to a cardiologist, their pancreas to an endocrinologist and their eyes to an optometrist.

None of this is wrong, of course, but it does distance us from the patient, who learns some new words like pancreas, insulin and HbA1c, but is unlikely to use these words in telling their life story!

But if we treat someone using the Aboriginal definition of health, our attention is directed more broadly. Health is about being able to reach your potential in connection with community. Successful management is directed towards this – treating the pancreas is only useful in how it allows people to do what they need to do in the community.

The issues are similar for mental health. Even starting to call it social and emotional wellbeing broadens our perspective from an issue of just medication and counselling for an individual to a community approach addressing inclusion, loneliness, acceptance of everybody.

Some readers will read this and say “we’re doing this already.” Good. I think many are. But it hasn’t entered routine policy, that this is the way we think of health. We still get caught up in thinking about diseases, health services and individuals, rather than creating healthy, vibrant and inclusive communities.

Aboriginal people have come up with a much more useful definition of health than the one we usually use. It describes, in less clunky prose than we are used to, what it is to be human and healthy.

Adopting this as a standard definition in Australia would improve health for all Australians.

Together, we can all be health ministers!

• This post is an expanded and updated version of a blog post here. These are personal opinions and do not necessarily represent the opinions of any organisations I work for.

Further reading on the campaign for constitutional recognition

• The PM’s speech in Parliament arguing the case for constitutional recognition is worth reading. 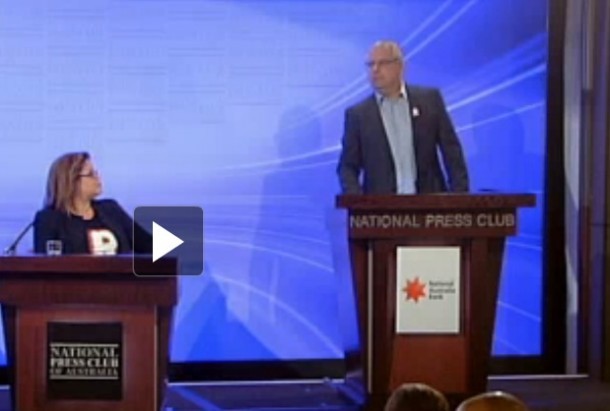 PrevPreviousReporting on the launch of the Social Determinants of Health Alliance
NextWhy we support measures to control the supply of alcohol: Aboriginal Medical Services Alliance NTNext