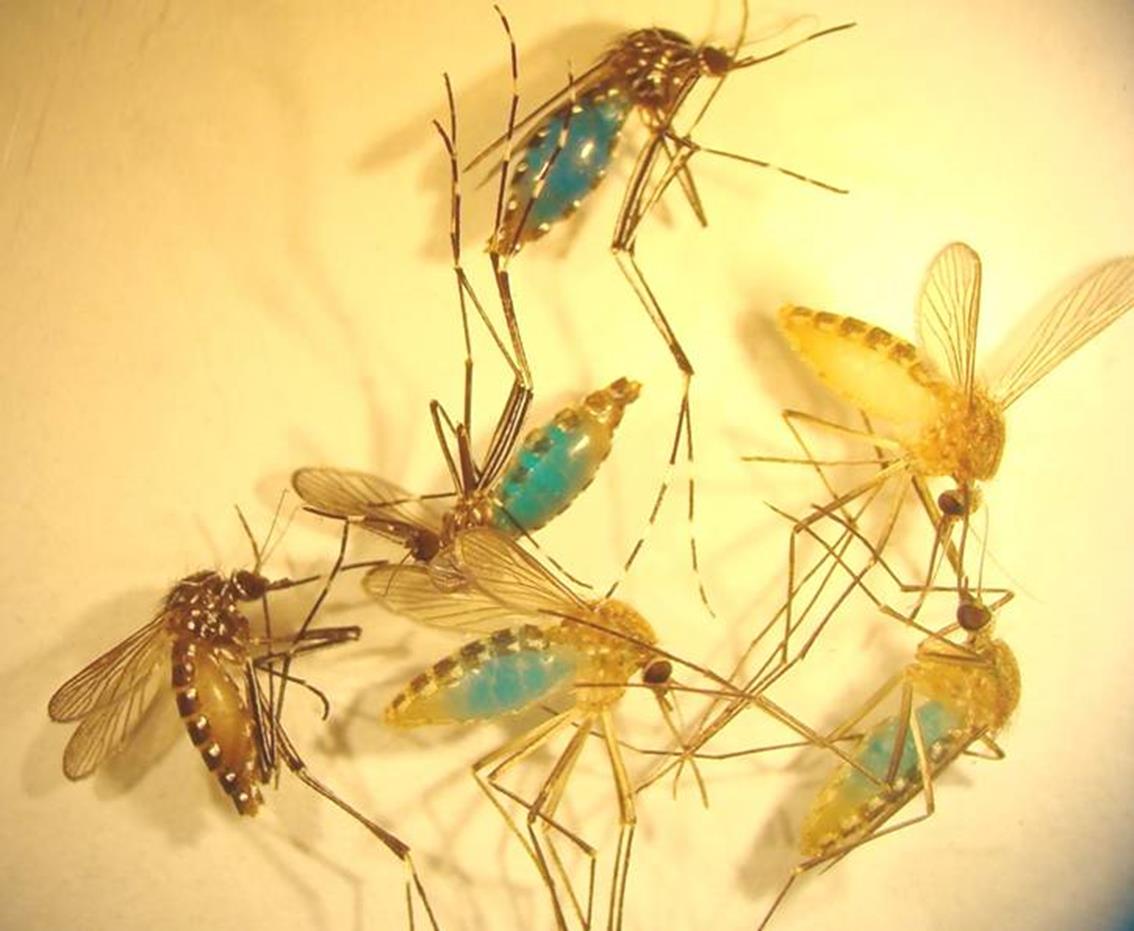 The trapped mosquitoes turn blue because of a dye mixed into the honey as part of the testing process. Photo courtesy of Dr Andrew van den Hurk.

As WHO warns of the rising threat of mosquito-borne diseases, Queensland scientists profile the response to Zika

At the 69th World Health Assembly in Geneva this week, the WHO’s Director-General, Dr Margaret Chan highlighted the challenges to global public health of infectious diseases in an interconnected world.

“Above all, the spread of Zika, the resurgence of dengue, and the emerging threat from chikungunya are the price being paid for a massive policy failure that dropped the ball on mosquito control in the 1970s,” she said.  A related extract from her speech follows below.

Beneath this is an article by three Queensland scientists, Dr Katherine E Arden, Dr Sonja Hall-Mendelin and Dr Ian M Mackay investigating how scientists are responding to the threat of mosquito-borne viruses in Queensland, one of the most susceptible places in Australia.

“A stern warning”: The world is not prepared to cope

In an interconnected world characterized by profound mobility of people and goods, few threats to health are local anymore.

The rapidly evolving outbreak of Zika warns us that an old disease that slumbered for 6 decades in Africa and Asia can suddenly wake up on a new continent to cause a global health emergency….

Changes in the way humanity inhabits the planet have given the volatile microbial world multiple new opportunities to exploit. There will always be surprises.

The possibility that a mosquito bite during pregnancy could be linked to severe brain abnormalities in newborns alarmed the public and astonished scientists.

Confirmation of a causal link between infection and microcephaly has transformed the profile of Zika from a mild disease to a devastating diagnosis for pregnant women and a significant threat to global health.

Outbreaks that become emergencies always reveal specific weaknesses in affected countries and illuminate the fault lines in our collective preparedness.

For Ebola, it was the absence of even the most basic infrastructures and capacities for surveillance, diagnosis, infection control, and clinical care, unaided by any vaccines or specific treatments.

For Zika, we are again taken by surprise, with no vaccines and no reliable and widely available diagnostic tests. To protect women of childbearing age, all we can offer is advice. Avoid mosquito bites. Delay pregnancy. Do not travel to areas with ongoing transmission.

Zika reveals an extreme consequence of the failure to provide universal access to sexual and family planning services. Latin America and the Caribbean have the highest proportion of unintended pregnancies anywhere in the world.

Above all, the spread of Zika, the resurgence of dengue, and the emerging threat from chikungunya are the price being paid for a massive policy failure that dropped the ball on mosquito control in the 1970s.

The lesson from yellow fever is especially brutal. The world failed to use an excellent preventive tool to its full strategic advantage.

For more than a decade, WHO has been warning that changes in demography and land use patterns in Africa have created ideal conditions for explosive outbreaks of urban yellow fever. Africa’s urbanization has been rapid and rampant, showing the fastest growth rates anywhere in the world.

Migrants from rural areas, and workers from mining and construction sites, can now carry the virus into urban areas with powder-keg conditions: dense populations of non-immune people, heavy infestations with mosquitoes exquisitely adapted to urban life, and the flimsy infrastructures that make mosquito control nearly impossible.

The world has had a safe, low-cost, and effective vaccine that confers life-long protection against yellow fever since 1937. That’s nearly 80 years. Yellow fever vaccines should be and must be used more widely to protect people living in endemic countries. Yellow fever is not a mild disease.

Let me give you a stern warning. What we are seeing now looks more and more like a dramatic resurgence of the threat from emerging and re-emerging infectious diseases. The world is not prepared to cope.

• This is an edited extract from Dr Chan’s speech to the 69th World Health Assembly. Read the full speech here and you can also watch it in the clip at the bottom of this post.

How are scientists responding to the threat of mosquito-borne viruses?

Mosquitoes are the deadliest animals on the planet because they can transmit the causes of a wide range of serious human diseases. Queensland reports human cases of malaria, Japanese encephalitis, yellow fever, chikungunya, dengue, Ross River, Barmah Forest and other mosquito-borne infections.

Most are imported into Queensland by infected travellers – dengue outbreaks occur every year in north Queensland – but Ross River virus and Barmah Forest virus are Aussies. The most recent front-page mosquito-borne disease is caused by Zika virus.

Zika virus has made headlines because infections may cause microcephaly, a range of other congenital central nervous system abnormalities, and some immune disorders.

To date, hundreds of microcephaly diagnoses have been mostly localised to north-eastern Brazil, where hundreds of thousands of Zika virus cases are suspected. Zika virus infections have skyrocketed globally, reported in 45 countries since the start of 2015.

The threat to the United States is considered such that $1.2 billion USD has been approved to prepare for an expected ‘US Summer of Zika’. Some have suggested the risks of further transmission of Zika virus following the Olympics in Brazil are too high, while others think they are minimal.

Queensland has reported 19 of Australia’s 34-plus human cases of Zika virus in travellers in 2016; more than any other Australian state. It is easy to feel worried about Zika virus given the current level of international concern, although the worst effects from infection remain rare.

So how are frontline scientists identifying Zika virus and monitoring mosquitoes of current concern to the public’s health?

A Zika virus infection is identified when a unique part of the virus’s genetic material is found in human blood or urine using a robust laboratory technique called the polymerase chain reaction, or PCR.

PCR tests are extraordinarily sensitive and very specific – capable of detecting tiny amounts of virus genetic material from a fraction of a millilitre of sample, in less than two hours.

Scientists at Queensland Health’s Forensic and Scientific Services (FSS) virology laboratories ensure each test is well designed and validated. Apart from detecting virus, signs of a past human infection can be sought in the form of specific antibodies triggered by recent or distant Zika virus infection.

This has proven challenging for Zika virus because our immune response to infection can cross-react with that due to infection by other mosquito-borne viruses like dengue, which are pretty common in tropical regions.

How to tell mozzies apart or know if they carry a virus?

There are 300 species of mosquitoes in Australia, of which only about a dozen are considered threats to public health. The mosquitoes of concern for Zika virus are members of the Aedes species; Aedes aegypti and Aedes albopictus (‘Asian tiger’).

In Australia, both are found only in Queensland. Ae.albopictus only live in the islands of the Torres Strait but Ae.aegypti range further south. FSS labs are testing a novel and rapid system that identifies which Aedes species are which by hatching their collected eggs and testing the genetic material of mosquito larvae.

Zika virus, like many other mosquito-borne viruses, is not established in Queensland.

How can we tell what viruses are in which mosquitoes?

Scientists at FSS collaboratively developed an innovative approach that revolutionised mosquito testing by taking advantage of the messy way female mosquitoes feed: they spit out saliva while they suck up their liquid meal.

Usefully, an infected mosquito will also spit out virus with its saliva and this can be captured in modified traps using honey as reward and a special type of filter paper, called Flinders Technology Associates (FTA) cards. FTA cards bind and preserve viral genetic material and also inactivate virus.

The cards can be safely sent by mail for a range of lab tests, avoiding the need for refrigeration; a cheap, fast and easy way to transport samples, even from remote Queensland.

A range of communication and control measures is rolled out by Queensland Health and local government in response to identification of a case of mosquito-borne infection. These measures have a proven track record of successfully containing outbreaks and have kept Australia safe.

New approaches, such as the Eliminate Dengue program’s controlled release of bacteria (Wolbachia)-infected mosquitoes, are being researched. The bacteria-infected mosquitos have a drastically reduced ability to transmit viruses.

Wolbachia-infected female mosquitoes spread the bacteria to their eggs and offspring. Studies show they can naturally replace the existing mosquito species population.

The result is a population of mozzies that are thought to be much less likely to infect humans with deadly viruses; a very promising tool.

A big, collaborative effort is required

Human travellers infected with Zika virus is the latest, but far from the most serious, mosquito-borne virus threat to Australia. Infected travellers will likely continue to arrive and there may even be outbreaks of local Zika virus transmission.

Trapping and PCR-testing mosquitoes is a huge, collaborative and expensive process – Queensland is a big place.

The ongoing diagnostic and research work of frontline scientists and their many collaborators should help ensure that Australia can quickly detect new mosquito and viral arrivals and head off larger outbreaks.

This should remain the case as long as the commitment to vigilance, flexible testing and innovation continues.

Funding provided by Queensland Health to support increased lab capacity and communications to the public in north Queensland is welcome as was the announcement of one million dollars in Federal government funds to bolster aspects of surveillance and control in north Queensland, including reducing mosquito numbers.

Australia is well placed to avoid becoming the next country to host a rapidly-widening spectrum of health problems attributed to Zika virus infection, or the next mosquito-borne threat that appears on the front page.

• Dr Katherine E Arden was awarded her PhD on the control of replication of HIV-1 from the University of Queensland, and spent 14 years as a postdoctoral researcher in fields including promoter studies of ion channels, trafficking of iron-related proteins in haemochromatosis, and the detection, culture, characterisation and epidemiology of respiratory viruses. She has since left the bench and is working as a freelance science and medical writer and grant reader, while gaining greater hands-on experience of respiratory viruses from her children.

• Dr Sonja Hall-Mendelin works at: Virology, Public and Environmental Health, Forensic and Scientific Services, Qld Department of Health. She has been a research associate at UQ from 1998-2006, completing her PhD on paralysis ticks and their toxin in 2009. Since then she has worked at Forensic and Scientific Services. Sonja has developed novel arboviral detection systems and is keen to integrate them into routine monitoring programs. She has undertaken seminal work in elucidating the vector biology of medically important arboviruses and biological agents that regulate their transmission.

• Dr Ian M. Mackay has appointments with the University of Queensland, and Virology, Public and Environmental Health, Forensic and Scientific Services, Qld Department of Health He is a virologist who spent 23 years at the Sir Albert Sakzewski Virus Research Centre, Queensland Health and The University of Queensland. Last year he left bench research and moved to a Supervising Scientist role in Queensland Health, supporting the detection and characterisation of known, new, newly identified and rare and emerging viral threats to public and environmental health at FSS.

PrevPreviousWhy has climate change disappeared from the Australian election radar?
NextWhere does your bank stand on fossil fuels? A call for health professionals to divestNext