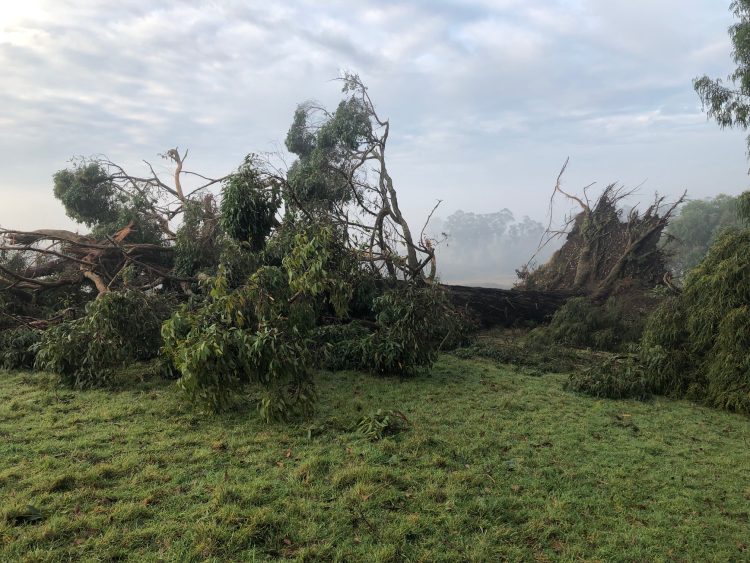 As yet another extreme weather event hits hard, where is the health response?

Introduction by Croakey: Around 1,500 Victorian households are entering their third week without power after violent storms devastated parts of the state this month.

It’s another example of an Australian community being battered by an extreme weather event, coming less than three months after catastrophic flooding in NSW.

A GP whose property was hit by the storm, Associate Professor Vicki Kotsirilos, has called for Primary Health Networks (PHNs), as well as peak medical organisations, to assist with planning and monitoring the health effects of extreme weather events, as well as advocating for action on climate change, reports Nicole MacKee.

Associate Professor Vicki Kotsirilos is on high alert. The Victorian GP’s farm – near Emerald in the Yarra Ranges – was hit by the vicious storm that struck the district on 9 June, and although her house was unaffected, dozens of century-old trees on her property were uprooted. The roofs of her carport and shed were destroyed.

And this may not be the end of it.

“We have also had warnings that with the next wind, there will be more trees falling, so while thousands of trees have already been uprooted in the area, the wind has destabilised a lot of other trees and [the high rainfall and flooding has] softened the soils,” said Kotsirilos, a member of the Doctors for the Environment Australia.

“With the next strong winds – which could be within days or weeks – there may be more trees falling.”

Kotsirilos’ farm was without power for nine days, but, having a city property, she had access to a hot meal, hot water and a shower, and noted that she was one of the lucky residents in the area.

Two people died in the storms, 98 homes were deemed unhabitable – with many more were damaged –  and, initially, more than 220,000 homes were left without power, according to The ABC.

The state’s worst affected areas were the Yarra Ranges, Latrobe and Trentham/Mount Macedon.

Earlier this week, more than 1,450 residents were warned that they will remain without power until about 10 July, and the Victorian Government announced that it would provide a Prolonged Power Outage Payment of $1,680 per week for up to three weeks.

The extended power outages have prompted renewed calls for the installation of underground power lines. Parts of the network damaged by the recent storms will be rebuilt underground to prevent future outages during natural disasters, The Age reported.

Flooding also damaged the Yallourn power station, which is in the Latrobe Valley, exacerbating the impact on electricity supplies in the state.

The Australian Defence Force also distributed 200 generators to houses expected to remain without power. Safety information will also be provided to all recipients about setting up, refuelling and maintenance, which is welcome information, given the US experience.

Of the 15 deaths linked to Hurricane Laura that hit Louisiana in mid-2020, eight were found to be carbon monoxide poisoning caused by the improper use of emergency generators.

Kotsirilos, who has lived in the Yarra Ranges for more than 15 years, said the storm was unlike any that she had experienced.

“Local residents in the Yarra Ranges and neighbours who have lived in the area for decades said they have never experienced storms like this before,” she told Croakey.

“The house was shaking, the windows were rattling, and we could actually hear a howl in the winds outside, it was quite frightening.”

Kotsirilos said that what made this storm different was the strong south-easterly winds coming in from Bass Strait.

Speaking to the ABC Melbourne after the storms, Dr Greg Moore, an arboriculturalist at the University of Melbourne,  said the unusual wind direction and wet soils contributed to the uprooting of the trees.

“[In Victoria we] expect winds from the north or the west, the trees have got used to those conditions over perhaps decades or centuries,” he said.

However, Dr Blair Trewin, Climate Scientist of the Bureau of Meteorology told the ABC that while the storms were “highly unusual it was difficult to attribute it to climate change at this stage”.

Kotsirilos said that she and her husband were able to keep warm during the nine-day power outage by staying active.

“I did a lot of gardening, clearing tree branches, and my husband did the chain-sawing. We had to stay active,” she said, adding they also had a wood fire for heating at night.

But not everybody has a wood-heater or are able to be so active, she said, adding that elderly residents, young families and pregnant women were most impacted by the conditions.

“Elderly people and families with very young children, may not be able to be so active. They have to think about how to keep warm and feed their family, and they may lack of access to shops due to blocked roads,” she said. “It can be distressing for young families and for pregnant women as well.”

While Kotsirilos said they were given a 48-hour warning from emergency services ahead of the storm via an app, elderly people in the area may have missed such information.

She said her 90-year-old neighbour has no mobile phone and her landline was cut in the storm.

First, there are the physical injuries – from the falling of trees and branches, falls, stained backs from lifting and abrasions from clearing branches, and potential chain-saw injuries for those inexperienced. Lack of access to hot water introduces hygiene concerns and flooding increases risks of infection, she said.

“In some areas of the Dandenong region, local residents couldn’t drink the local water because it was contaminated with the floods,” Kotsirilos said, pointing to an issue that is of increasing concern during natural disasters.

Then, Kotsirilos said, there were the mental health consequences and stress, which could present in the short and the longer term.

“Communities have suffered from bushfires in the past, and when we suffer from other natural disasters such as storms and floods, lack of access to amenities, and not being able to move off your property, it may trigger post-traumatic stress disorder, and anxiety,” she said.

“And it may aggravate mood disorder and cause depression as well, with residents experiencing ongoing distress, thinking ‘here we go again, how am I going to cope?’.”

ABC TV’s 7.30 Report last night detailed stories of people struggling to find accommodation, and of others being badly traumatised as they face many months of clean up ahead.

Dr Zena Burgess (PhD), CEO of the Australian Psychological Society (APS), said the fact that this latest disaster was not an isolated event added to the challenge of preventing and managing the mental health effects.

“We all know that Australia has a climate where you have natural disasters, but in Victoria, we have had bushfires, we have had many COVID lockdowns – we are just finishing our fourth lockdown – and now these storms; it’s really a layered effect on the community,” Burgess said.

“Each disaster leaves an echo of stress and distress, and that has a layering effect.”

The difficulty psychologically, she said, was that people were not able to recover from one extreme weather event before the next hit.

“That’s why we have lots of people seeking psychological support for assistance and direction at the moment because they are suffering from grief, anxiety, depression, post-traumatic stress disorder,” Burgess said, noting that about 30 percent of people require some degree of mental health support after a disaster.

“Some people also resort to drinking excessively or using drugs to try to alleviate the distress they are feeling.”

She said the APS worked in collaboration with the Red Cross to provide psychological support with a team of 500 psychologists specifically trained in disaster response, and the organisation also had a range of public resources to support disaster recovery.

“So, you add [climate-related anxiety] to storms, floods, COVID, and you can see there are serious issues around anxiety and depression in young people and hence the demand for those resources,” Burgess said.

The mental health effects of climate change were also highlighted in a UK paper published recently by the Grantham Institute of the Imperial College London. The paper concluded that climate change was negatively affecting the “mental health and emotional wellbeing of people around the world”.

But, the authors noted, a “win-win” effect was possible with improved mental health and wellbeing being associated with taking actions to reduce greenhouse gas emissions and efforts to adapt to a warming climate.

Kotsirilos said it was clear that Australia was at crisis point and urgent action was needed to monitor, plan, adapt and, hopefully, prevent increasingly frequent extreme weather events that may be coming from climate changes.

“We should be looking at these unusual weather events that are happening nationally, and rapidly moving to learn to adapt and prevent such crises,” she said.

“And on a broader level, it makes good sense to rapidly move from air pollution sources such as coal-fired power stations to green energy.”

In addition to the environmental benefits of reduced CO2 emissions, she said there were a raft of health benefits from reducing air pollution associated with coal-fired power stations.

“It’s important to move to greener energy sources such as solar power and wind power, not only because of possible climate changes, but also because they are a major source of air pollution. There is a substantial level of evidence that air pollution is a significant risk factor, amongst other risk factors, for a number of chronic diseases, including heart and lung disease, and asthma.”

Kotsirilos said Primary Health Networks (PHNs), as well as peak medical organisations, could play crucial roles in planning and monitoring the health effects of extreme weather events, as well as advocating for action on climate change.

“PHNs can play a role in communicating with the local doctors about what to look out for in your patients after the storms and floods, including the mental, emotional, social, and physical effects of these events,” Kotsirilos said.

And all peak medical bodies, she said, could help to raise awareness about the adverse health impacts of climate change and extreme weather events.

Kotsirilos said it was critical that climate change was considered a health/medical issue and not just an industrial, economic, and political one.

“These extreme weather patterns affect the health of the community and human beings,” she said.

“We can plan and adapt, and hopefully we will be able to rapidly address future extreme weather patterns by converting to renewable green energy and move away from coal fired power stations.”

(Thanks to Marie McInerney for the detail from the 7.30 Report).

See our previous stories on extreme weather events and health.