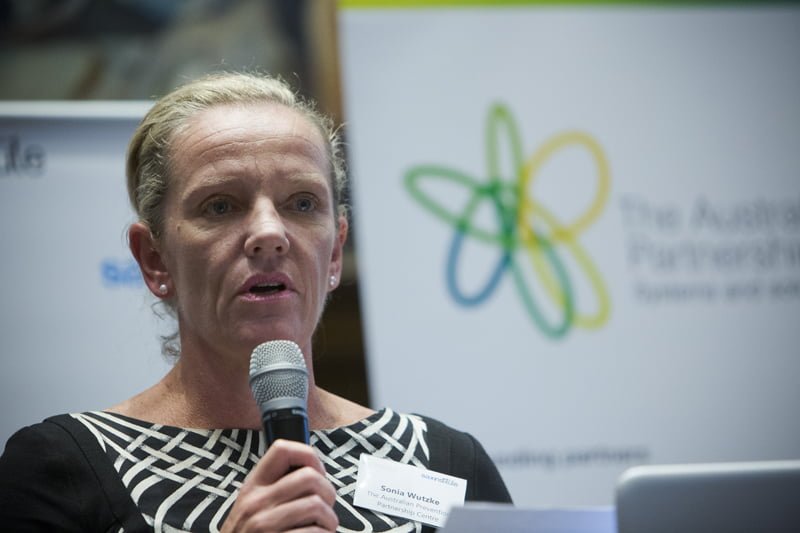 The public health community was shocked and saddened by the death of Associate Professor Sonia Wutzke on 22 December 2017.   Wutzke was the Deputy Director of the Australian Prevention Partnership Centre (APPC) and a respected and dedicated public health leader.

The following obituary of Wutzke, prepared by Marge Overs and Helen Signy, was originally published on the APPC website and is re-posted here with permission.

International experience shows that finding answers to the greatest public health challenges of the 21st century requires a coordinated effort across all levels of government, academia and the community. It requires high quality, relevant research undertaken in partnership with decision makers. Associate Professor Sonia Wutzke, who died on 22 December 2017 at age 47, was an expert in creating such an environment to drive change.

A leading figure in public health in Australia, Sonia understood that wise decisions are needed to deliver high quality health within available resources. She passionately believed in the power of research to contribute to change, and applied persistence and creativity to bring together research and decision making, leaving an impressive legacy of real improvements in health and health care.

As leader of many large and successful research collaborations during her too-short career, Sonia’s enormous ability for engaging people from different backgrounds and sectors meant her projects walked the talk of research co-production.

She was not daunted by complex problems; she thrived on them. Sonia had the rare quality of being able to make things happen. She could take a grand yet hazy vision and turn it into reality, considering all the components and expertly drawing together the strands to deliver.

As Deputy Director of The Australian Prevention Partnership Centre, Sonia steered one of Australia’s largest research collaborations that is taking a new approach to ‘wicked’ public health problems by bringing together research and policy to prevent chronic diseases. The Centre is based at the Sax Institute, where Sonia was also Head of Analysis and Evaluation and a much-valued member of the Executive Team.

She was a feisty and forthright colleague, who said what she thought and, with trademark diplomacy, stuck up for what she believed in. She was immensely loyal to her colleagues, to her staff and to her ideals. No matter whether you were a Masters student or a state chief medical officer, she valued your input and made you feel you could be part of the solution.

It was when she submitted her PhD thesis on addressing hazardous alcohol use that Sonia started to question the value to public health of traditional academic research.

The emphasis from her supervisors seemed to be on her own career development, she thought – but how would publishing a few academic papers actually make a difference to people struggling with alcohol problems?

A passion for driving change

It was this passion for driving change in public health that became central to Sonia’s life work. Having held various roles at the University of Sydney and then at Central Sydney Area Health Service, her first leadership position saw her run program evaluation for the National Prescribing Service for more than five years.

Here she led the establishment and ongoing design and implementation of the broad-ranging evaluation program to support Australia’s strategic approach to the quality use of medicines. She became the heart and soul of the organisation, fostering a positive and inclusive culture beyond her team to across the organisation.

Sonia joined the Sax Institute in 2006 and played a leading role in building two of Australia’s most significant research collaborations, the 45 and Up Study and SEARCH, both of which are ongoing research platforms that will benefit the health of Australians long into the future.

She took the helm of the 45 and Up Study soon after the pilot phase and under her leadership more than 200,000 people were recruited to the cohort, making it the largest study of ageing in the Southern hemisphere. Today more than 650 researchers and nearly 30 policy agencies have used the Study data – and the resulting research has informed many policy and service delivery decisions.

The 45 and Up Study would not have happened so rapidly and effectively without Sonia’s remarkable capacity to make important ideas a reality by bringing together effective teams and supporting complex collaborations.

SEARCH is Australia’s largest cohort of urban Aboriginal children, a complex partnership between Aboriginal Community Controlled Health Services and their communities, the Aboriginal Health and Medical Research Council, governments and many researchers.

At a critical period in its development, Sonia led the recruitment of children and their families and strengthened the collaborative structure on which the study still relies. The findings from SEARCH have already resulted in improvements in hearing and speech services, in housing and in nutrition and mental health programs – all are part of Sonia’s legacy.

Before joining The Australian Prevention Partnership Centre in 2013, Sonia was Research Manager at the NSW Agency for Clinical Innovation (ACI). There, she was the architect of the ACI’s research strategy, providing a key role for the renewed direction of the Research Committee.

Sonia will be remembered for her extraordinary intelligence and her ability to see a way through the most messy and complex of problems. She had a rare understanding that not every problem has a simple solution, but that little by little you could change the direction of an entire system.

Under her stewardship and with Director Andrew Wilson and the leadership team, the Prevention Centre grew to span 150 researchers across Australia working on 37 research projects in almost every state and territory. In its first five years, the Centre has produced ground breaking initiatives that will help policy makers understand where to intervene to address the risk behaviours for chronic disease, including the economic benefits of prevention, how the built environment supports better health choices, and what the effects of government programs will be into the future.

Most recently, the Prevention Centre secured an additional $10 million in funding in one of the first disbursements of the Medical Research Future Fund – testament to the trust held in the Centre at the highest levels of government.

Perhaps Sonia’s greatest skill was to draw out the best from her team. She took a keen interest in the careers and welfare of all her colleagues, providing numerous opportunities for development. She elicited trust and respect through her commitment and sense of fairness. It was never about her own career; it was about the team and what they could achieve together.

Giving back to the community

There was a modesty about Sonia, an ability to connect with people on many different levels. She was as comfortable talking about the latest episode of The Bachelor as about advances in dynamic simulation modelling.

She described and treated her team as her “other family” – and families mattered to Sonia. Through her own experiences, she keenly understood how hard it was to balance motherhood and paid work, and allowed her staff flexibility to balance home and work duties.

In addition to her academic work, Sonia was passionate about giving back to the local community. She gave her precious time to support Sutherland Food Services Meals on Wheels, sitting on the management committee for the last 2 ½ years. Previously, she had given her time to support Keystone Community Solutions and 3Bridges Community, both local organisations focused on improving people’s wellbeing.

A proud and loving mother

Her greatest achievement was her two daughters, Alex and Carly. Despite her commitment to achieving the highest standards at work, Sonia would always make time for them. She would answer every one of their phone calls, once famously dashing out to buy fake eyelashes for a school formal while conducting a high-level teleconference on her mobile. Her love and pride in her girls shone through at work – she spoke of their academic and artistic talents, their first jobs, and how well they were making their way in the world. They were, quite simply, her most important life’s work.

Sonia will be keenly missed by hundreds of colleagues whose lives she touched across governments, universities and public health organisations.

She is survived by her beautiful daughters, Alex and Carly.