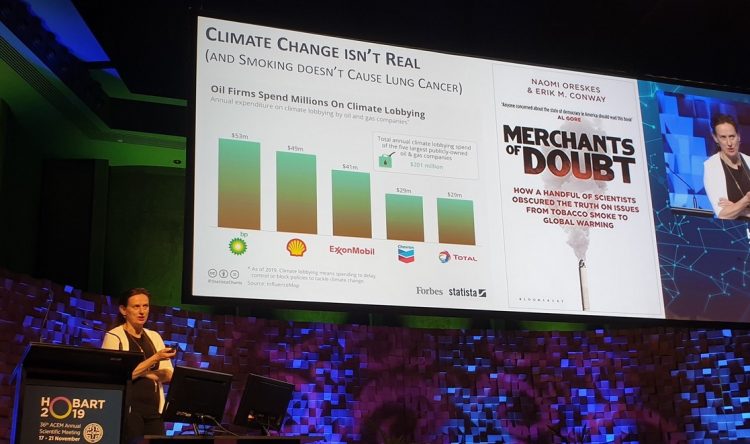 At a critical juncture for public health advocacy, what are the narratives and strategies for impact?

As communities grapple with bushfires and their devastating health impacts, with vast swathes of NSW affected, the need for effective, creative and sustained public health advocacy becomes increasingly urgent.

Many parallels can be drawn between the challenges facing public health advocates, whether on the climate emergency, the alcohol toll, the online spread of hate speech, policing, the resistance to harm minimisation, or any other number of concerns.

Amy Coopes reports from the recent annual scientific meeting of the Australasian College for Emergency Medicine for the Croakey Conference News Service.

Health advocates have been urged to ‘supercharge’ the narratives and strategies they bring to public debate in contested policy areas ranging from alcohol and other drug use, to climate change and mental health.

The call came from a topical and timely session at a recent summit of Australian and New Zealand emergency doctors that looked at a range of areas where ideology and vested interests are undermining evidence-based approaches to public health.

Titled Science, people, policy and politics: The complex interactions between political action, policy and evidence in the public sphere, the plenary session at the annual scientific meeting of the Australasian College for Emergency Medicine (ACEM) zeroed in on a number of hot-button topics, including pill testing and Sydney’s lockout laws.

Both were in the news recently, with the NSW Government announcing it would roll back its contested lockout and last drinks policy from January, and a group of senior doctors from Sydney’s St Vincent’s Hospital writing to Premier Gladys Berejiklian urging her to trial pill testing and end police strip searches at music festivals.

The latter again made headlines recently, with another drug-related death at a music festival in regional NSW, and a separate incident at a festival in Ballarat which left a man in a critical condition.

Harm minimisation, including the use of pill testing and a tempering of police powers, was recommended in two recent inquiries into drug use in NSW. Drug-checking also received a boost last month in Tasmania, with the upper house voting in support of a motion to trial pill testing at festivals and events in the state.

Australia’s leading authority on the issue, Associate Professor David Caldicott, offered insights from some two decades advocating for pill testing and other harm minimisation strategies. He presented with characteristic candour and humour (‘I took a coroner to a music festival!’ was one crowd-pleasing anecdote).

In a post-truth ‘Murdochracy’ where re-election was all that mattered to politicians and where vested interests and powerful lobby groups wielded disproportionate influence, Caldicott said the evidence was no longer enough – public health advocates needed to offer a counter-narrative that was both powerful and enduring.

“We are in a bad place where it is far more important to be elected than it is to show leadership, I think that’s what the problem is,” Caldicott said in an interview with Croakey on the sidelines of the summit.

“We have to demonstrate how electoral success can be associated with leadership, which is not how it is working at the moment.” 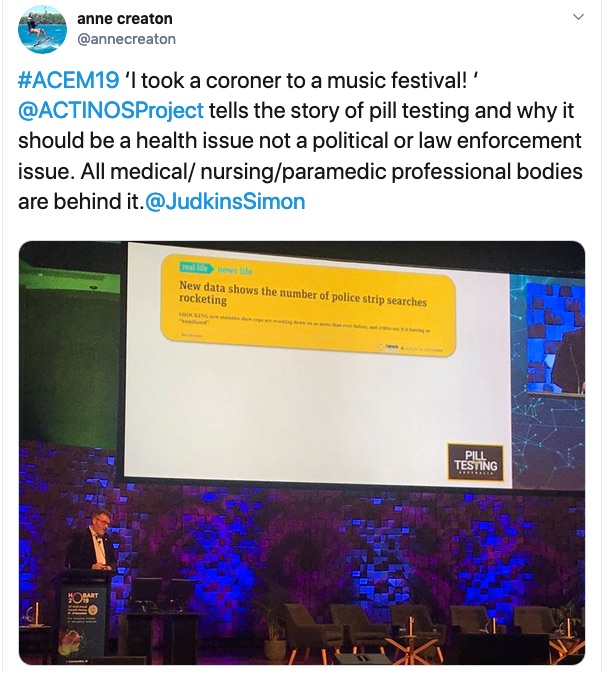 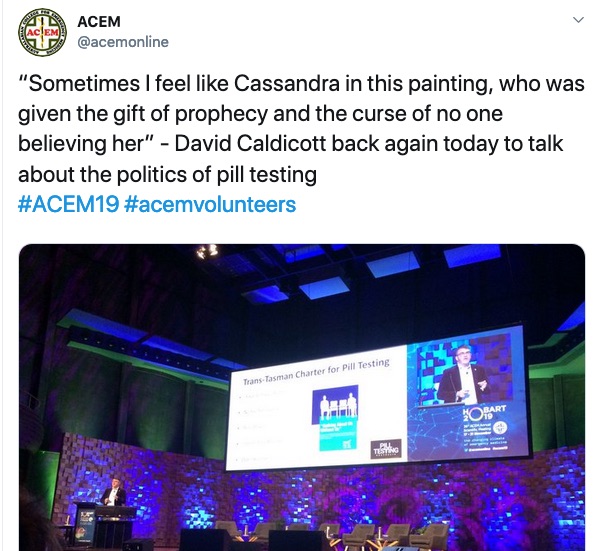 When it came to drug policy, Caldicott said politics continued to trump rational outcomes, with the Labor Party so determined not to be ideologically linked with the Greens in jurisdictions across Australia that it preferred an ‘unholy’ alliance with conservatives, something he likened to “mating a platypus to a camel”.

He pointed to the influence of powerful groups, including the pharmaceutical industry and law enforcement, with Australia’s National Pain Strategy receiving ‘unencumbered assistance’ from all the major opiate producers (a concept Caldicott said had been exposed as a ‘fiction’ by Ben Goldacre in his bestseller Bad Pharma), and medicinal cannabis stymied by TGA concerns over competition to the multibillion-dollar poppy farming sector.

He said there were “extraordinary” parallels between issues like pill testing, marriage equality and climate change – “where you have an overwhelming body of opinion that is congruent in what they think should happen – evidence, experts, expertise leading in one direction only – and for reasons that are varied, our elected colleagues choosing not to listen.”

Caldicott shared the overwhelming evidence supporting pill testing as a harm minimisation strategy, with reductions where it was utilised in surrogate data including medical tent presentations, hospital attendances and ambulance transports, largely due to a collaborative shift in focus away from preventing drug-taking to preventing drug deaths.

“How we move politicians to be bold enough to apply that – that’s politics,” he said.

“Pill testing is going to get up; it’s just a question of how much political damage political parties are going to do to themselves before it gets up. It’s inevitable now, I believe… The hope will be that no other family has to lose somebody before it is implemented.”

Professor Diana Egerton-Warburton, one of Australia’s leading researchers on alcohol-related harms and a board member of the National Advisory Council for Alcohol and Drugs, emphasised the power of storytelling to sway not only political but also public sentiment.

She started her talk with a vignette about her nephew, Robert, who was assaulted in the street by an intoxicated stranger in Melbourne on AFL Grand Final weekend, suffering severe injuries that landed him in hospital. She described this as a “ubiquitous” vignette because it was such a common experience

“Was what happened to Robert bad luck or bad policy?” asked Egerton-Warburton. 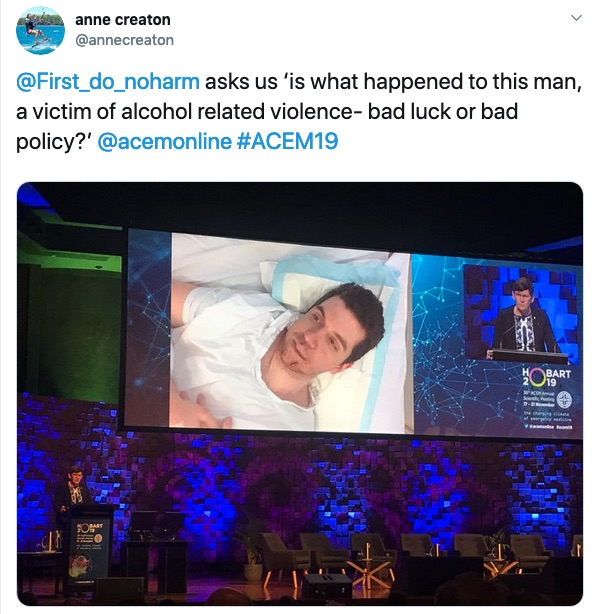 She presented data from ACEM’s #alcoholharmED initiative showing that across Australia and New Zealand EDs, on any given hour and any given day, 10 percent of all presentations – some half a million patients – were linked to alcohol, climbing to 1 in 7 (15%) on a Saturday night.

There was also “compelling” longitudinal data now demonstrating that early closing laws reduced serious assaults and incidents by 20 percent per hour after 1am, she said, also pointing to the effectiveness of minimum pricing to staunch what she described as the “reverse Jesus Christ phenomenon”, where bottled water was more expensive than wine.

Despite the evidence, Egerton-Warburton said the political appetite had waned for lockout laws, underscoring the need for renewed advocacy with narrative at its heart; stories to “give the data superpowers”.

She shared a video from ACEM’s #AlcoholHarms campaign, which drew on such a strategy (see a still from the video below). 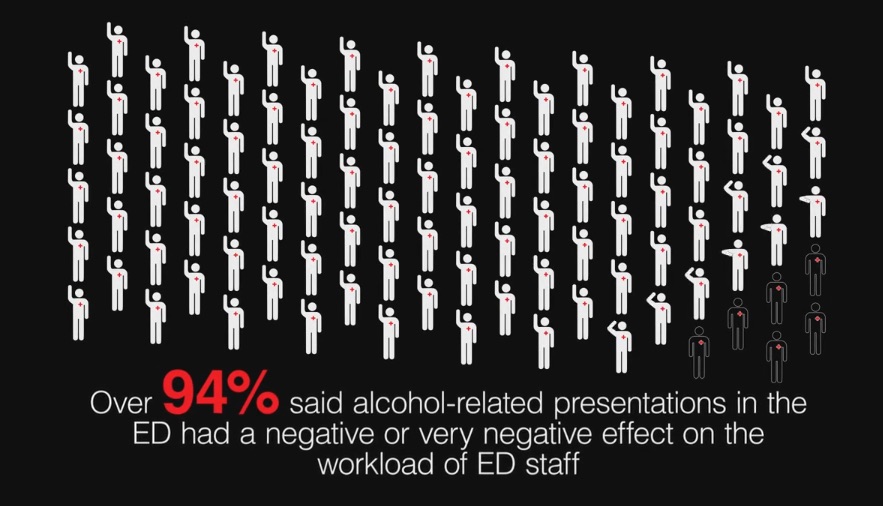 Like Caldicott, Egerton-Warburton pointed to the troubling influence of vested interests and called for political donations reform (you can read more on this issue at Croakey here).

Professor Helen Berry, an expert in climate change and mental health and part of the Australian Lancet Countdown team, said lies and misinformation – including content disseminated by the mainstream media – were a critical factor in Australia’s ‘dithering’ on the climate emergency.

Berry presented a stark data comparison charting a decline in media reporting on the climate emergency as insurance claims skyrocketed. (We will publish more on Berry’s work and her presentations to the conference in a separate article to come.) 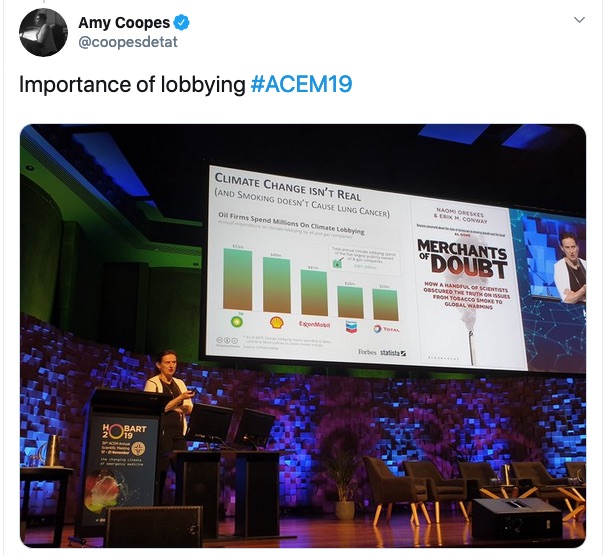 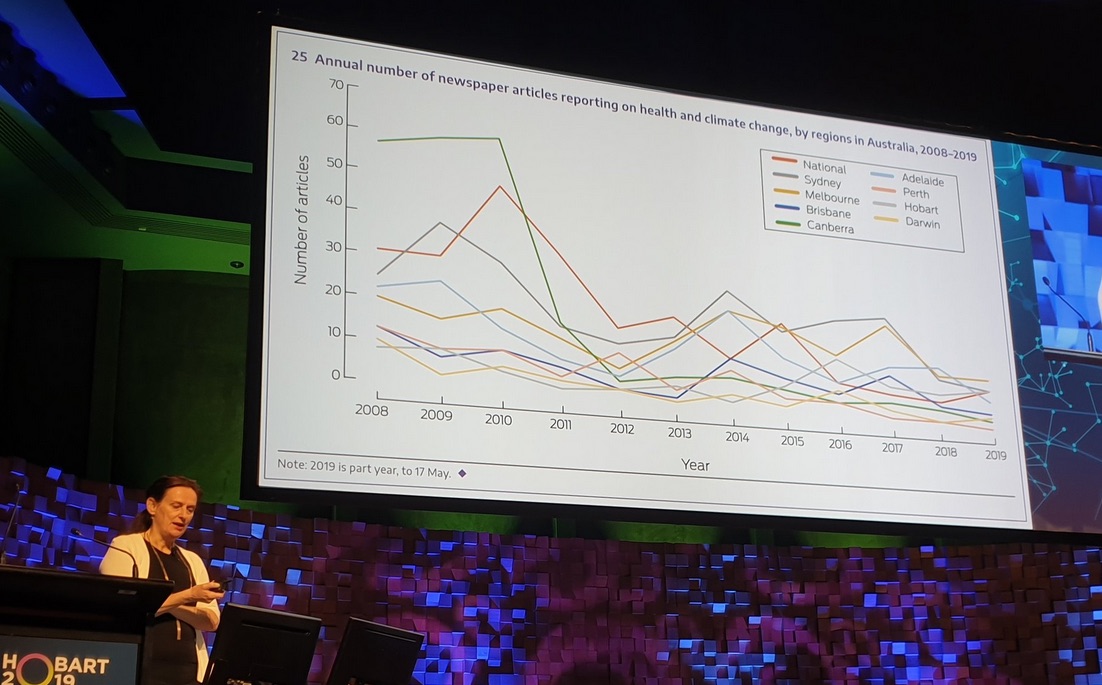 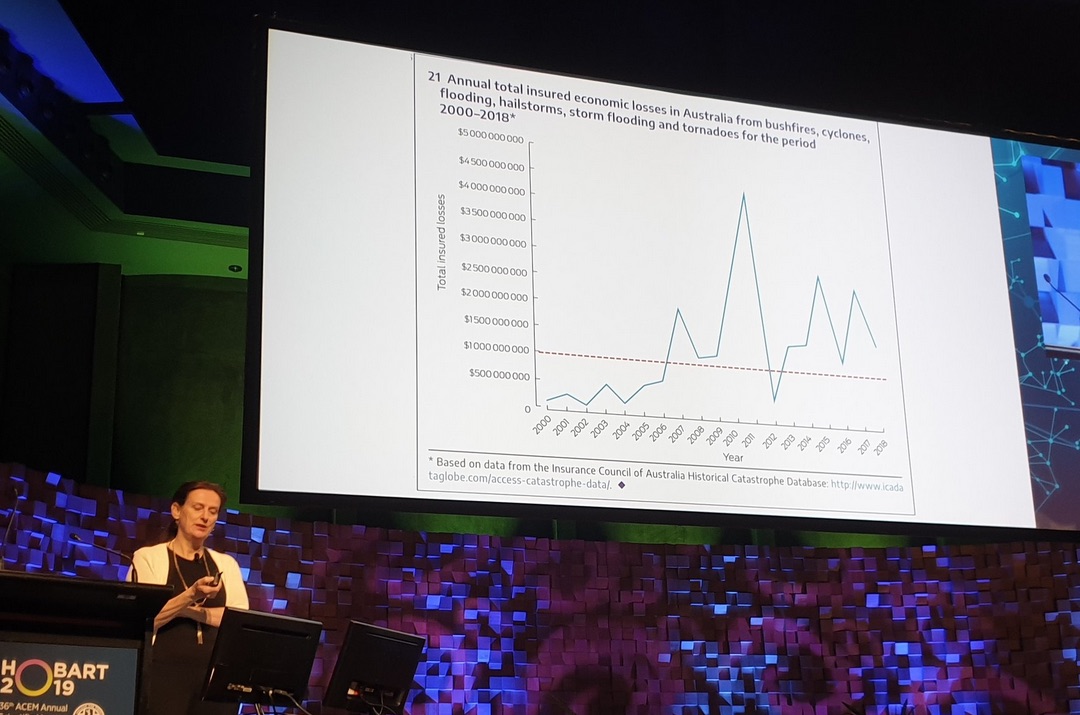 Outgoing ACEM president Simon Judkins closed the session with a keynote on the College’s advocacy on mental health, one of his priorities as leader and a legacy of his time in office.

Judkins emphasised the importance of strategising in and acting on a number of fronts to realise success in the policy space.

On mental health, this had involved holding summits, strengthening networks with bodies like the RANZCP, establishing and bolstering the evidence base including commissioning an independent analysis and roadmap for reform, making submissions to inquiries, publication of reports and academic articles and maintaining a high profile in the media.

He also demonstrated how vital it was to have a strategic framework comprising a set of goals, actions and outcomes to measure success by.

Looking ahead, Judkins identified a number of priorities in 2020 and beyond, including: 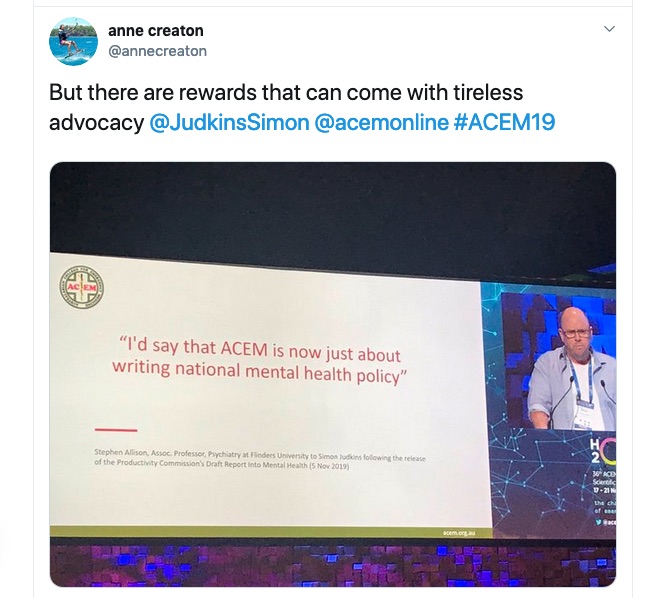 Watch our interview with Caldicott

• See this 21-page Twitter summary of the session, featuring tweets by Amy Coopes and others. 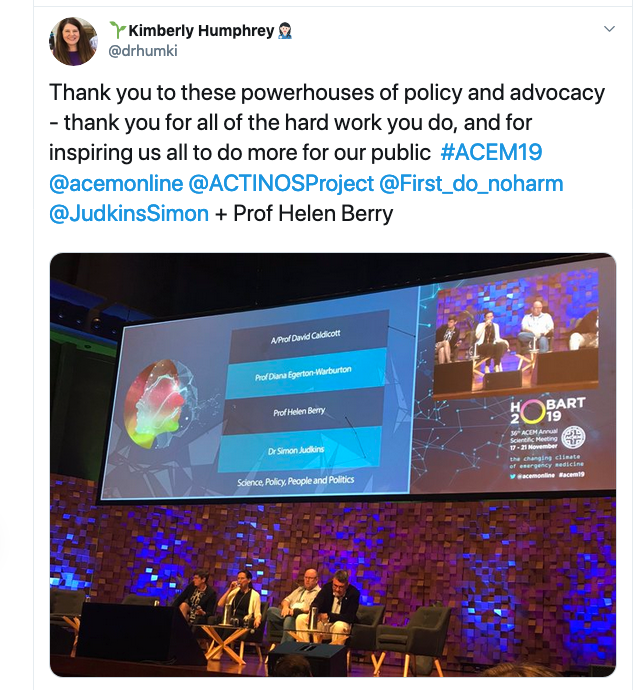 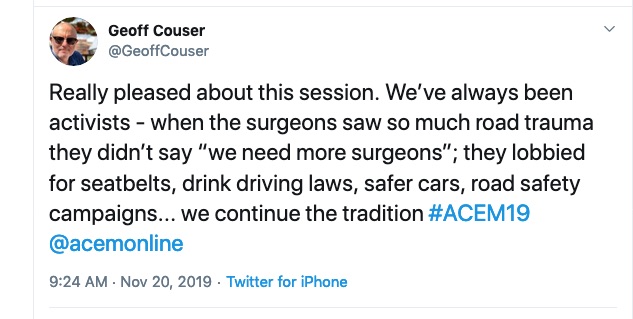