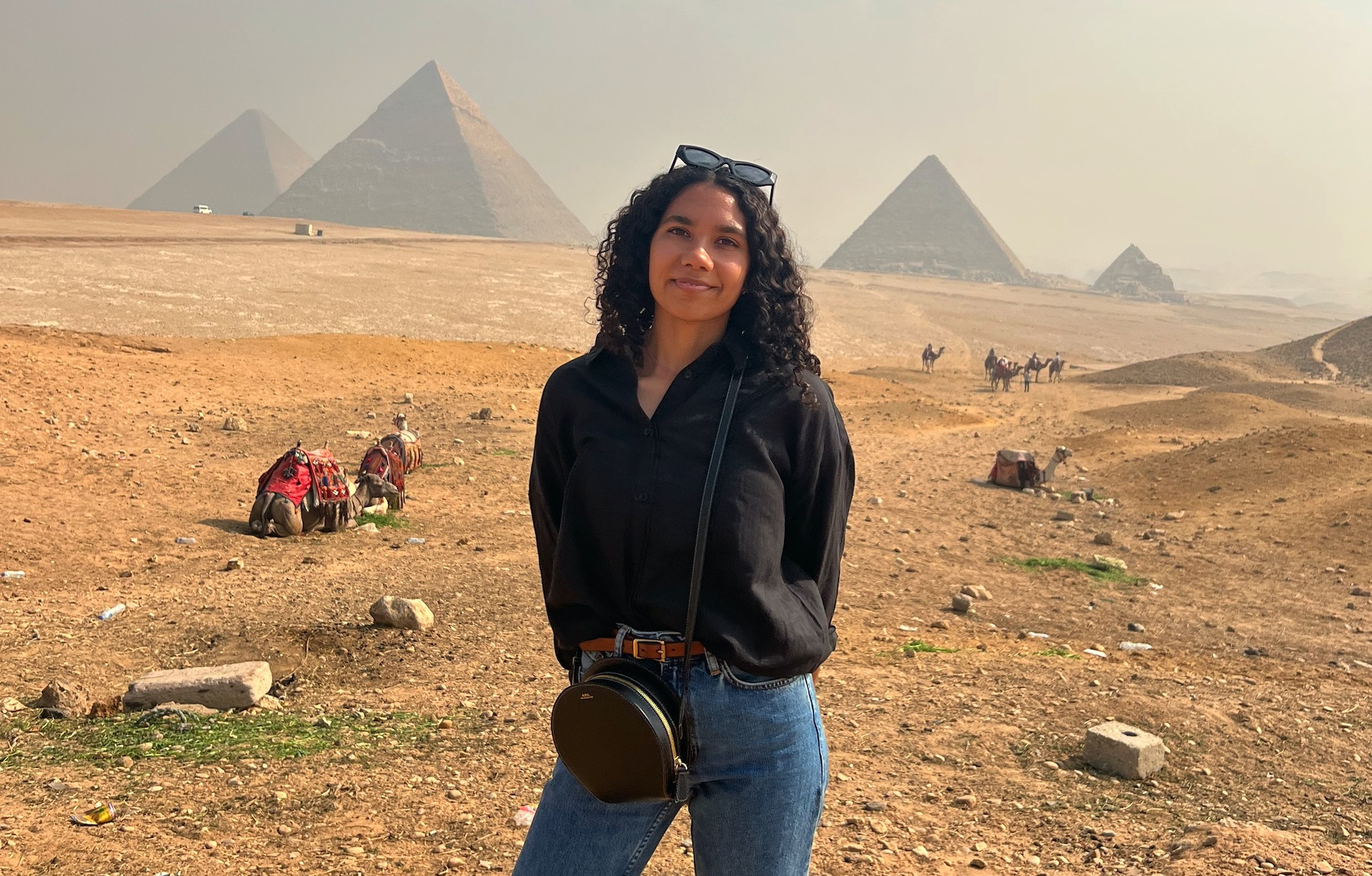 At COP27 and beyond: First Nations voices and solutions must be “heard at all times and at every level of society”

This article was first published on Tuesday, November 8, 2022.

I am Amba-Rose, a proud Gumbaynggirr nyami from the mid-north coast of New South Wales. My mother belongs to the Gumbaynggirr peoples through her father’s lineage, and we are also Bundjalung (north of the Clarence River) and Dunghutti (south of the Nyambaga River). My family names are Flanders and Kelly, and we are saltwater, freshwater people. My father’s patrilineal family lines are Kabi Kabi and Jinibara from south-eastern Queensland, and my father’s matrilineal family lines are from far north Queensland. I acknowledge and pay my respects to all First Nations Peoples and recognise your ongoing Custodianship to your lands and waterways and acknowledge all your Ancestors from long ago up to now.

Currently, I am in Egypt, for the 27th United Nations Climate Change Conference (COP27), in Sharm El-Sheik. I join the largest contingent of First Nations Peoples from all over the world, to advocate and fight for Country. Representation is an important first step; however, we must now strive for an empowered voice and the redistribution of asymmetric power structures.

It is time global leaders and governments recognise that First Nations Peoples and Knowledges are powerful solution-oriented forces that need to be heard, respected and empowered, for the benefit of Country and all the biodiversity that exists within Country. Professor Kerry Arabena, a proud Meriam woman from the Torres Strait Islands has written powerfully about how destroying the relationship between First Nations peoples and Country destroys our holistic health and wellbeing; Country is our life source, we are inextricably linked to Country, and Country to us. My presence in Egypt is to uphold these teachings and advocate alongside many other First Nations peoples and reinforce the message, now is the time to act!

I am a second year Doctor of Philosophy (PhD) Candidate at the Poche Centre for Indigenous Health Research and School of Public Health, Faculty of Medicine, the University of Queensland. My PhD study looks at the relationship between Country, Climate, and First Nations Peoples’ Health; and how the Knowledge systems of this relationship can and must be embedded in localised and place-based environmental, climate, and health solutions.

For First Nations Peoples, there is a ngirrawaygam ngarraynggaygu wajaarr (responsibility to mind the land). First Nations Peoples globally represent six percent of the world’s population, yet protect 80 percent of the world’s biodiversity, maintaining the largest network of custodial stewardship over indispensable biodiversity. Despite this overwhelmingly positive contribution, global economic and socio-political systems arguably stunt the untapped potential of ancient systems of kinship, language, and Lore that have the capability to create a healthier more ecologically sustainable future for all peoples.

[The most] important kinds of relationship in life are, firstly, those between Country and people and, secondly, those amongst people themselves, the second being always contingent upon the first.”

Graham eloquently states that Country is a sacred entity, not property or real estate; it is the great mother of all humanity. Graham contends that how we treat Country is what determines our human-ness, as Country is sacred and must be looked after, the relation between people and Country becomes the template for society and social relations. Graham summarises that as such, all meaning comes from Country.

There is an urgent need to interrogate the meaning of ‘human-induced climate change’, or ‘climate change-induced ecological breakdown’. Climate change can be understood as one of the many symptoms caused by the disruption to Country-centric relationships emerging from the ongoing impacts of imperialism and colonialism.

For the first time, First Nations authors contributed to the 2022 IPCC Impacts, Adaptation and Vulnerability report. The resultant spike in word count for ‘colonisation’ and ‘Indigenous’ was simultaneously empowering and disarming due to a clear duality; finally, First Nations Voices are being included, although First Nations Peoples are the first to be impacted by climate change yet the last to be heard.

In Australia, the federally funded State of the Environment 2021 report included First Nations researchers, community leaders, and professionals, notably also for the first time. One of the key findings highlights that First Nations voices need to be urgently heard, and that First Nations-led caring for Country initiatives, supported via culturally informed holistic and long-term programs that meet the needs of community are key to restoring Country, as experienced by all peoples.

For my Gumbaynggirr waarru-biin (people), we are gaagal (Sea) people and much of our food comes from the sea and rivers; if the ocean and rivers can’t breathe, then we cannot. Our waterways are a source of life as well as a source of food.

For First Nations Peoples, the ability to care for Country supports cultural identity, health and wellbeing. This has been so for time immemorial, leading to highly adaptive ways of sustaining life which are passed down from generation to generation, centered on a deep respect for Country. Localised and place-based solutions, informed by proven Knowledge Systems, are essential in climate adaptation responses and solution. Gumbaynggirr people know Gumbaynggirr wajaarr best. This is same for all other First Nations Peoples and their lands, informed through thousands of years of custodianship.

We cannot solve the climate crisis from the same worldview from which it emerged. Māori scholars (Indigenous Peoples of Aotearoa) Associate Professor Rhys Jones and Professor Papaarangi Reid, and non-Indigenous scholar-activist Associate Professor Alexandra Macmillan, urge a commitment towards decolonisation and Indigenous Sovereignty. The authors state that while the immediate threats of climate change are very real, we must prioritise addressing the root cause, and propel the “crucial work of subverting the system as a whole”. Failure to do so will only intensify the severity of the climate crisis, violate First Nation people’s human rights, and further cost the survivance of Country. This is a crisis of inequality and must be treated at its source.

It is vital that First Nations voices and solutions are heard at all times and at every level of society; and not simply after further global warming disasters have struck. Too often are First Nations Knowledges ignored, minimised within Western scientific frameworks, or relegated to an acknowledgement of its usefulness. The consequence of this exclusion, and compartmentalisation of First Nations Knowledges ensures that the many millennia of observing, managing, and caring for Country remain silenced.

I call on governments and peoples all over the world to hear the voices of First Nations sovereign peoples and take responsibility for the colonial settler-imposed, human-centered systems and structures that are plummeting humanity and Country into a point of no return.

We are the oldest continuing culture in the world, we are adaptive, and we are fierce. We remain strong and defiant in attempts of erasure. Ngarraanga ngiyambandi wuuru. Hear our Voice.

• I am attending COP27 with Climate and Health Alliance and the Climate Action Network Australia to advocate for the voices of my peoples, and the health and wellbeing of my Country and community. On Thursday, 10 November, I will present at the WHO Pavilion on ‘Urgent action to strengthen climate change education for all health professionals’, where I will discuss the necessity to decolonise the framework that climate change education extends from and apply my Gumbaynggirr lenses in its analysis.