‘The Coal Face’: fateful decisions & more questions on the ongoing public health crisis of the Hazelwood coal mine fire 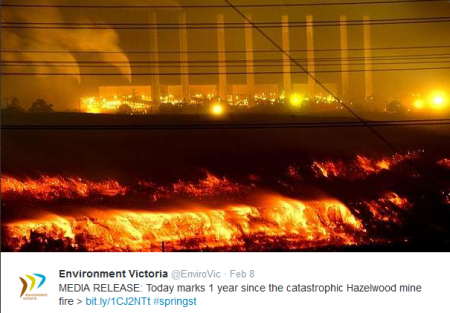 The Coal Face by Melbourne journalist and author Tom Doig is a compelling read about the 2104 Hazelwood coalmine fire, which began on 9 February 2014 and burned for 45 days, sending smoke and ash over the town of Morwell in Victoria’s Latrobe Valley.

The book is short and sharp, and details fateful decisions made over decades at the mine and in response to the fire and growing public health emergency by health and environment officials and the Napthine Coalition Government. It’s also a great read about the emergence of the Voices of the Valley community campaign which nearly unseated the National Party MP at the November state election.

Their ongoing research and advocacy also led last week to the announcement by the Andrews Labor Government that it was re-opening the Hazelwood mine fire inquiry to examine whether it caused premature deaths in the area. Premier Andrews also announced $25.4 million in funding to implement all recommendations of the original inquiry, which he said would improve safety at the three major coal mines in the Latrobe Valley and across Victoria.

The post below features excerpts from The Coal Face compiled by Tom Doig and his update on the community’s continuing concerns, including a failure to investigate health conditions and mortality rates in the broader Latrobe Valley region. 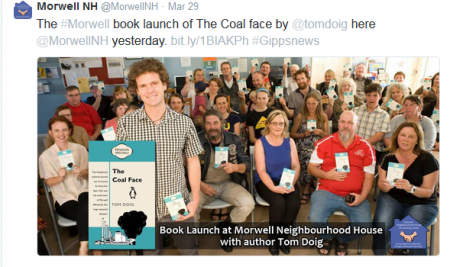 On the afternoon of Sunday 9 February 2014, the open-cut coalmine next to Hazelwood Power Station caught fire. It burned out of control for forty-five days – over 1000 hours. The town of Morwell, home to 14,000 people, is less than half a kilometre from Hazelwood mine. In the Latrobe Valley, over 70,000 people live within 20 kilometres of the mine. Choking smoke and toxic gases filled the Valley. Carcinogenic brown coal ash fell as far away as Warragul, 50 kilometres to the west, and Sale, 60 kilometres to the east.

The short-term health effects included stinging eyes, sore throats, headaches, difficulty breathing, chest pains, rashes, nausea, ‘metallic taste in mouth’, bleeding gums, bleeding noses, diarrhoea, vomiting, and eleven probable deaths. The medium- and long- term health effects remain to be seen. The mine fire was ‘a world’s first in terms of prolonged adverse air quality’, according to the Environment Protection Authority Victoria. Environment Victoria described the smoke as ‘possibly the worst incident of environmental pollution in our state’s history’. The mine fire was one of the worst industrial disasters Victoria has ever seen. It may also prove to be one of the worst public health disasters the state has ever seen.

The fire was foreseeable.

The disaster was preventable.

(from Part One: The Fire)

‘You’re still alive and you’ve got feet – so come to work tomorrow,’ she told Melinda.

Tracie already knew that a lot of people had been affected by the fires, but even with the information she’d been able to glean from her firefighter husband Simon’s CFA radio, even with hours spent on Facebook, she still wasn’t sure which areas had copped it worst. So when she drove in to work from Traralgon on Monday morning she thought, Let’s start with what we’ve got, touch base with the people we know. Tracie and Melinda closed the Neighbourhood House to the public and started ringing through their database: about 300 phone numbers, all across Morwell.

Immediately Tracie had people saying to her: ‘Yes, we’re safe, thanks for ringing. This smoke’s a bit funny …’

At first Tracie wasn’t too concerned, because there was still a lot of bushfire smoke around. But at the same time, it did strike her as strange: a lot of those people had lived near power stations and coalmines their whole lives, so they should’ve been used to smoke.

Tracie opened the Neighbourhood House back up on Tuesday. It was still really smoky outside, but some people came in for their computer skills classes anyway.

‘This is different,’ remarked another.

‘There’s something going on …’

You’ve lived here for forty years and you’re saying this is different, Tracie found herself thinking. Hmm … By now Tracie and Melinda were taking active notes. If they knew where someone lived, they’d write: Resident on McMillan Street reports headache. Resident on Wallace Street is reporting sore throat. By the end of that first week, Tracie had spoken to close to a hundred different people on the phone or in person, and she was getting the same answers: sore throats. Difficulty breathing. Stinging, irritated eyes. Headaches. Tracie herself had what she called a ‘thick head’ – not a headache exactly, but a weird heaviness in her brain. It would come over her as she drove in to work in the morning and leave at night when she drove back to Traralgon.

Tracie and Melinda plotted all their information on a map: complaints from Berry Street and Avondale Road in the south, complaints from Airlie Bank Road and Beattie Crescent in the north. It felt like the whole of Morwell was complaining. Tracie didn’t know what was going on, but she knew something was up.

In the second week Tracie and Melinda did another round of phone calls. This time they started getting reports of bleeding noses – and asthma. People with pre-existing asthma problems were having to implement their asthma plans, but other people were saying, ‘I just went to the doctor, and they’ve given me a Ventolin inhaler? I’ve never had asthma before, but now I can’t breathe …’

Within a week, the situation had gone from being ‘a little bit irritating’ to the point where ‘the community was completely distressed’.

‘On Thursday 20 February 2014,’ Tracie wrote in her subsequent submission to the Hazelwood Mine Fire Inquiry, ‘I typed up all the health concerns reported by the residents. It was clear that the problem was across the town. I sent this information to the Latrobe City Council and the CFA engagement team at the Hazelwood mine fire by email. It was my understanding they were feeding the information I provided to the Department of Health.’

Tracie did not hear from the Department of Health.

(from Part Three: Fallout and Fightback)

Latrobe Valley residents Tara Dean and Ron Ipsen became involved with the newly-formed community advocacy group Voices of the Valley in the first weeks of the mine fire. After a huge community protest in Morwell, the group’s ambitions and workload ‘just snowballed’. There was a group of eleven core people, a dozen more semi-involved members, and lots of chat on social media. Tara became mates with Julie Brown, who lived in Morwell. At an early Voices of the Valley meeting, Julie mentioned in passing that someone she knew had been to five funerals in the past week. The Latrobe Valley is home to some of the least healthy people in Victoria – along with the adjacent shire of Wellington, which is downwind from the brown coal power stations. Latrobe and Wellington have the highest rates of lung cancer and heart disease in Gippsland; this is often attributed to ambient air pollution. Latrobe Valley residents die four years earlier than the state average, and workers at the asbestos-riddled Hazelwood Power Station die fifteen years earlier than the average. Even so, five funerals seemed a lot.
Once it had become ‘really fucking obvious’ to Ron Ipsen that something was going on, he thought, I better put a questionnaire up on the internet, to document people’s symptoms. Ron got ninety-one responses, from as far afield as Traralgon, Yinnar and Warragul. Some comments on the completed surveys included:

In March 2014, firefighters began to get the better of the burning banks of coal. By this time mine owners GDF Suez had had to install 8 kilometres of brand new water pipes and sprinklers on and near the northern coalface, at a cost of $2.5 million. (For the 20 years before this, the mine owners had concentrated on removing old steel and copper water pipes and allegedly selling them as scrap metal.)

On 25 March 2014, over 1000 hours after the mine fire began, then-Fire Services Commissioner Craig Lapsley declared the blaze ‘under control’. The CFA and MFB firefighting bill was $32.5 million; the total cost of the fire was reckoned to be well over $100 million. The mine fire wasn’t out; it was still smouldering, and on windy days it would still become hard to breathe in Morwell. And while the worst of the disaster was over, the public health crisis wasn’t.

Fourteen months after the mine fire began, the appalling health effects are still being felt across the entire Latrobe Valley, and beyond. Unfortunately, many of the symptoms of mine fire smoke poisoning – headaches, difficulty breathing, heart pain, brain aneurysms – are indistinguishable from the health problems caused by day-to-day life in the Valley, where the air that everyone breathes is laced with coal dust and coal smoke. Meanwhile, statistically significant increases in deaths have been detected in the Latrobe Valleys postcodes of Tralalgon and Moe.

After a lengthy tender process, the Victorian Government selected Monash University to conduct a long-term health study on Morwell residents. While this is an important and necessary step, the study’s failure to investigate health conditions and mortality rates in the broader Latrobe Valley region is a surprising oversight – and an unjustifiable omission, given the overwhelming evidence that health effects were in no way confined to the township of Morwell.

Furthermore, Voices of the Valley are concerned that the state government currently has no plans to provide any clinical support to the residents of the Latrobe Valley who have suffered through this disaster. In this context, the current ‘health study’ can be seen as little more than a ‘death study’ that provides no benefit whatsoever to the injured community – or, as Ron Ipsen put it, ‘an exercise in coffin-counting’.

When the state Labor government were in Opposition, they were happy to use the botched handling of the Hazelwood mine fire as a stick to bludgeon the Napthine Liberals with. Now that Daniel Andrews is in power, there are promising signs that he will do a better job than his predecessor. Last week, on Friday 24 April, Andrews announced that the state Labor government had committed $25.4 million to implement the recommendations of the 2014 Hazelwood Mine Fire Inquiry.

At the press conference, Voices of the Valley president Wendy Farmer confronted Andrews with the fact that Latrobe Valley children currently have to wait half a year to see a paediatrician, due to increased demand.
‘If there are long waiting lists to see paediatricians in this community then we’ll get some paediatricians from the Royal Children’s Hospital or somewhere else to come down here,’ Andrews responded.

Andrews also made good on his pre-election promise to reopen the Mine Fire Inquiry. According to the Latrobe Valley Express, hearings are expected to begin in early June.

‘What occurred here [in the Latrobe Valley in 2014] was wrong and we owe it to everybody impacted by this […] that we learn from that fire and we make better preparations for the future,’ Andrews said. ‘I think those families and the entire community have a right to know what were the exact impacts of the Hazelwood mine fire.’

For the residents of Morwell and the Latrobe Valley, the waiting game continues.