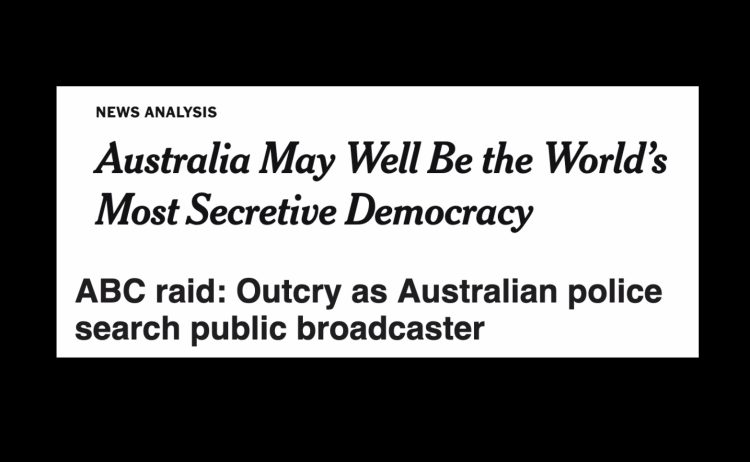 Headlines from The New York Times and BBC

Attacks on press freedom will undermine public policy (amongst other things)

This week’s attacks on press freedom in Australia – which featured in The New York Times and Columbia Journalism Review – will not only have a chilling effect upon public interest journalism and whistle-blowers, but will also undermine the development of public policy.

Michael Thorn, Chief Executive of the Foundation for Alcohol Research and Education (FARE), said AFP raids upon the ABC and a News Corp journalist’s home were ultimately aimed at intimidating public officials.

“People in bureaucracies or agencies who are motivated by the public interest will be intimidated further,” he said.

“The public interest won’t be served by these sorts of actions by an incredibly opportunistic AFP.”

Thorn said the AFP’s actions would make it “even more difficult to have sensible conversations about public policy” because they would further discourage the bureaucracy from engaging actively with public health organisations, researchers, and other leaders about policy development.

It will have a wider dampening on policy processes.

People will be even more cautious about what they put in an email. The practice where officials used to ask open questions of those outside the public service, ‘what do you think about this and how do you think we should respond?’ …this will completely end it.”

Thorn said the raids would discourage transparency in policy making:

History shows us that when people operate out of view, bad things happen.

I’ve been concerned about this for a long while, not just in terms of health policy but generally public policy; it’s just getting worse and worse.”

The Public Health Association of Australia also raised concerns, while not commenting on the specifics of the raids. A spokeswoman said: “Strong public health relies on public institutions that seek the common good. When the state appears to operate in a heavy handed way, it can shake public faith in public institutions.” (Note from editor: the PHAA commentary was amended after publication at the request of the PHAA).

Watch the interview with senior ABC journalist John Lyons, who live-tweeted the AFP raid on the ABC.

“I've never seen an assault on the media as savage as this… I've never seen a warrant this comprehensive & I'd say scary… The chilling message is not so much for the journalists, but it's also for the public,” head of ABC Investigations @TheLyonsDen tells @PatsKarvelas #auspol pic.twitter.com/8sB4KVe8WY

Below are comments tweeted by Dr Tim Senior, a GP and Croakey contributing editor: 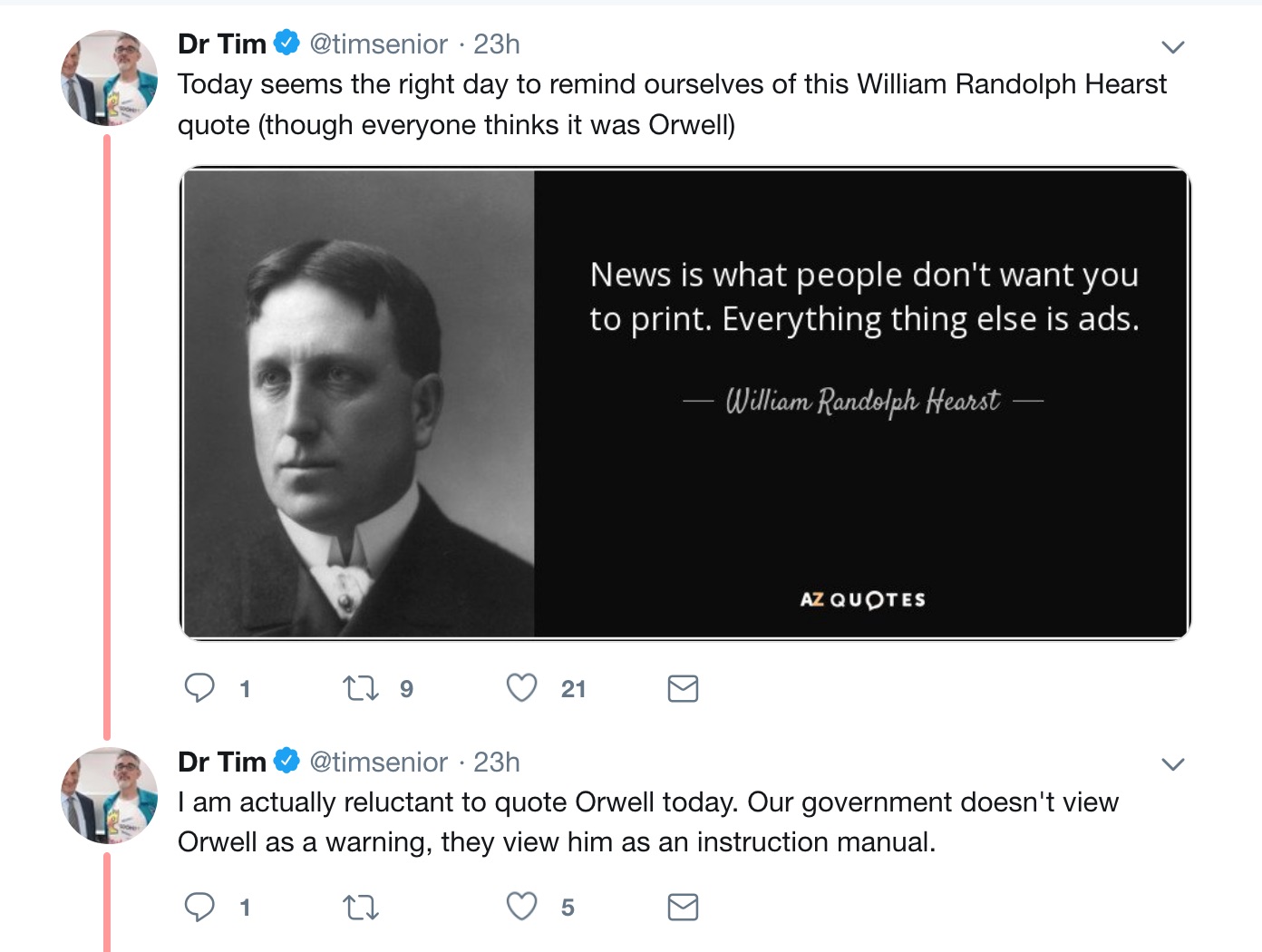 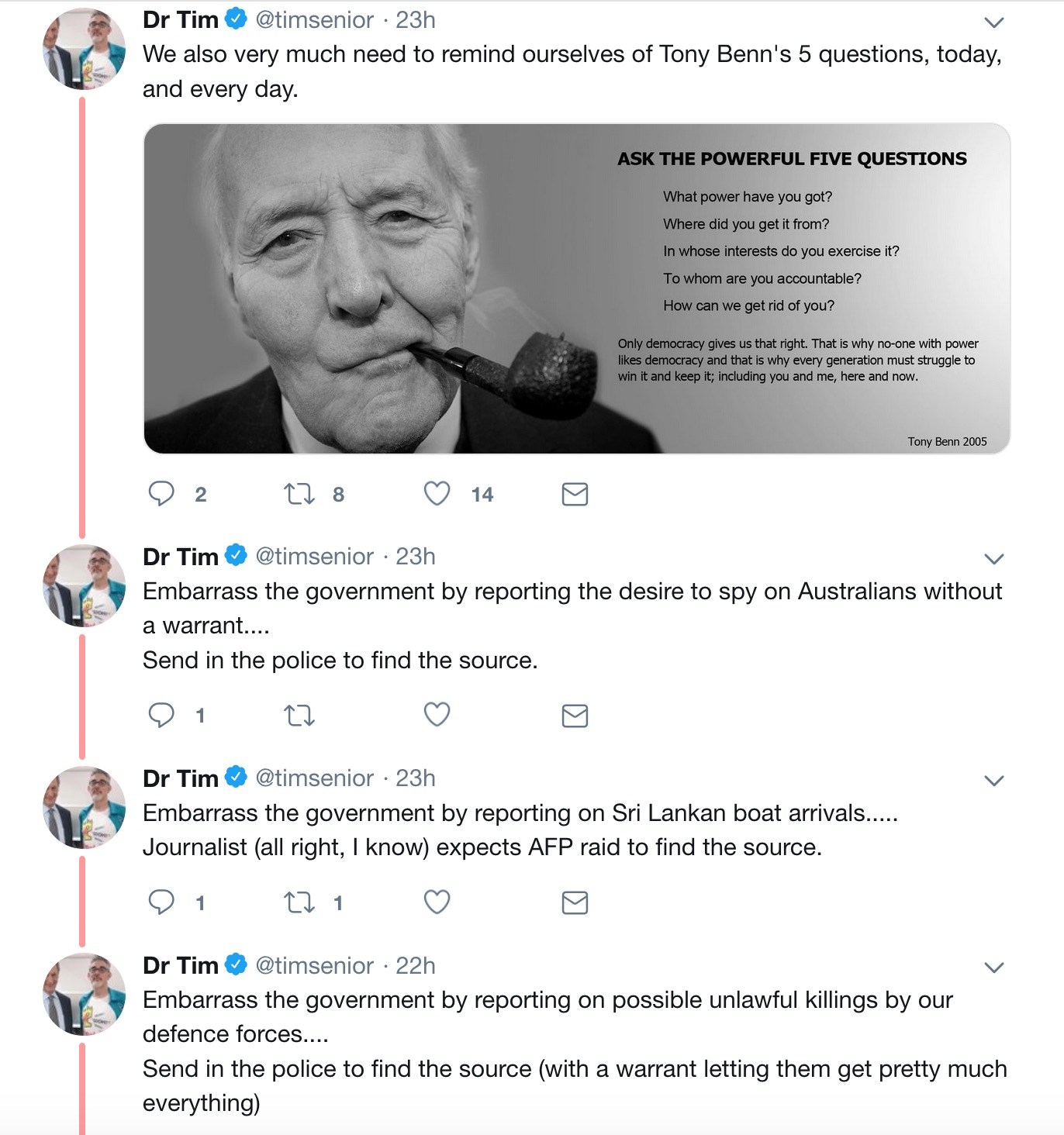 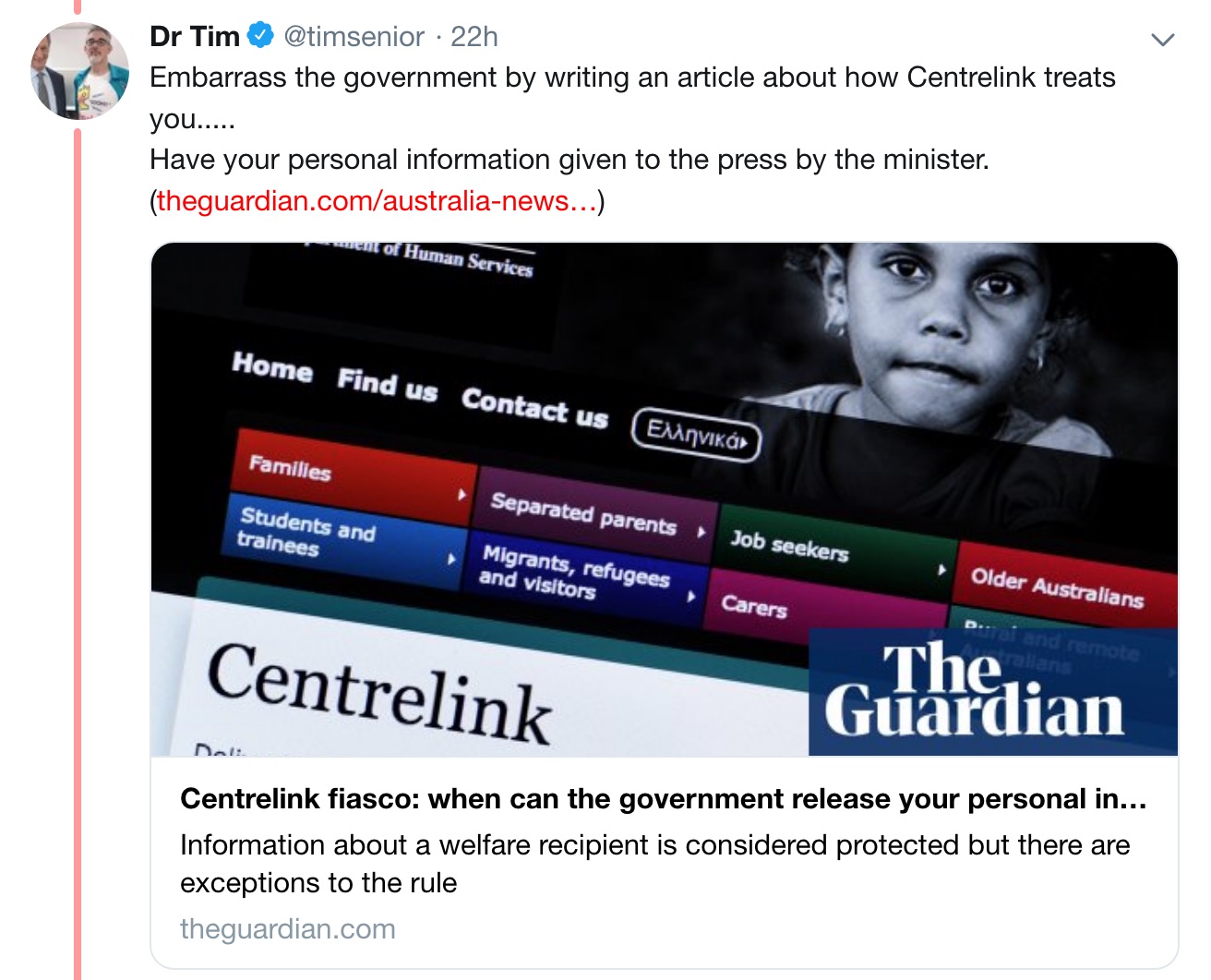 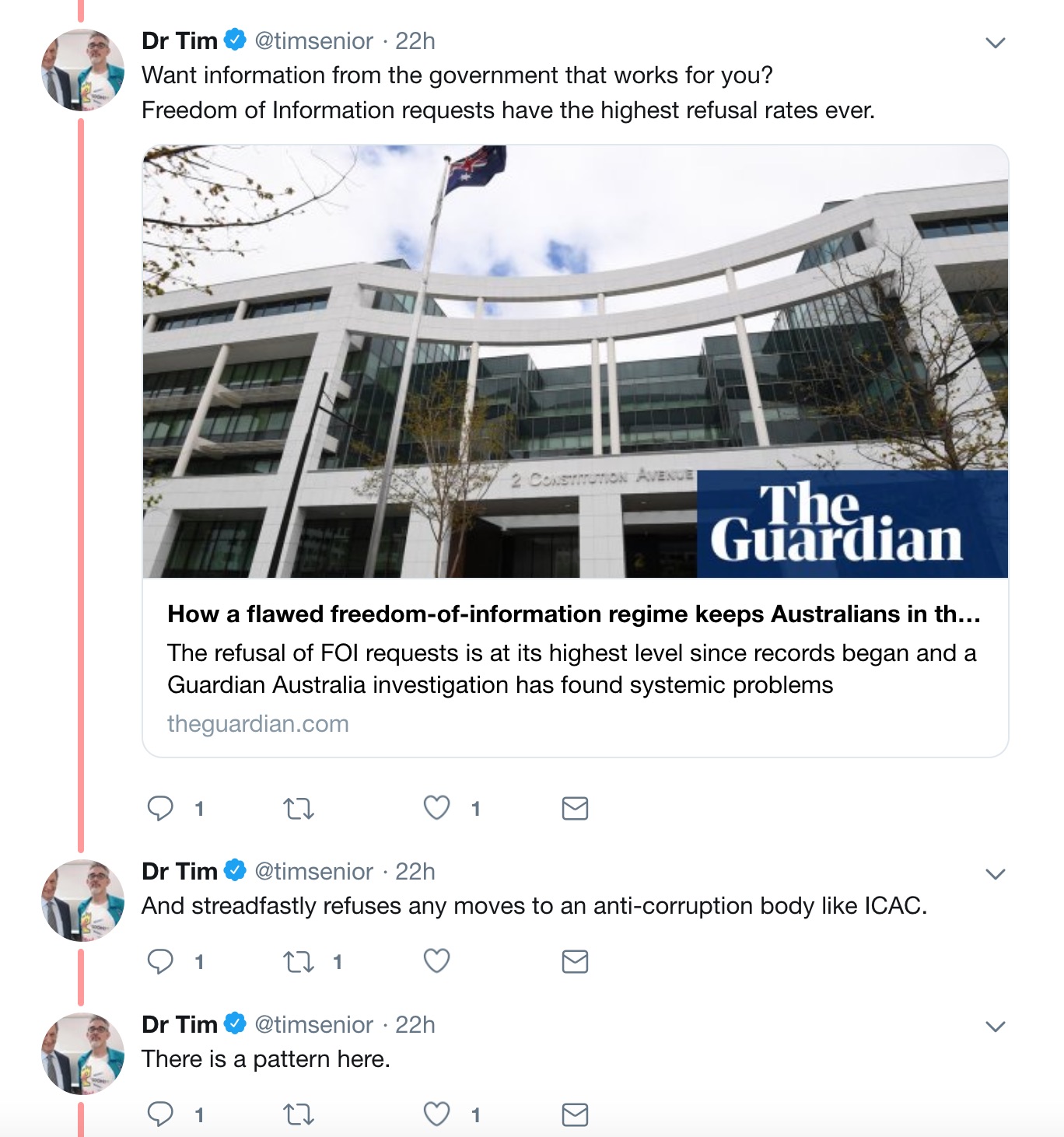 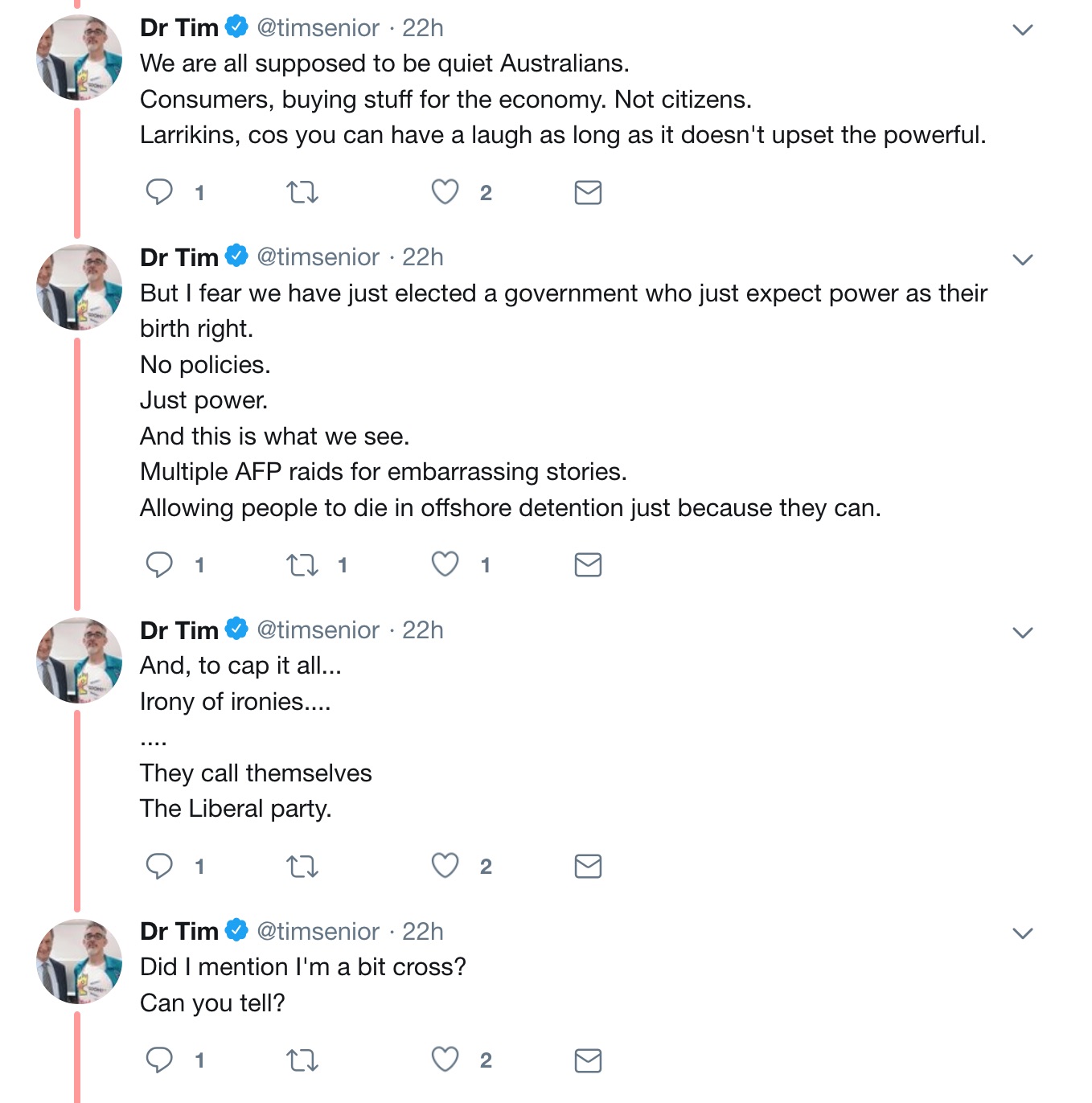 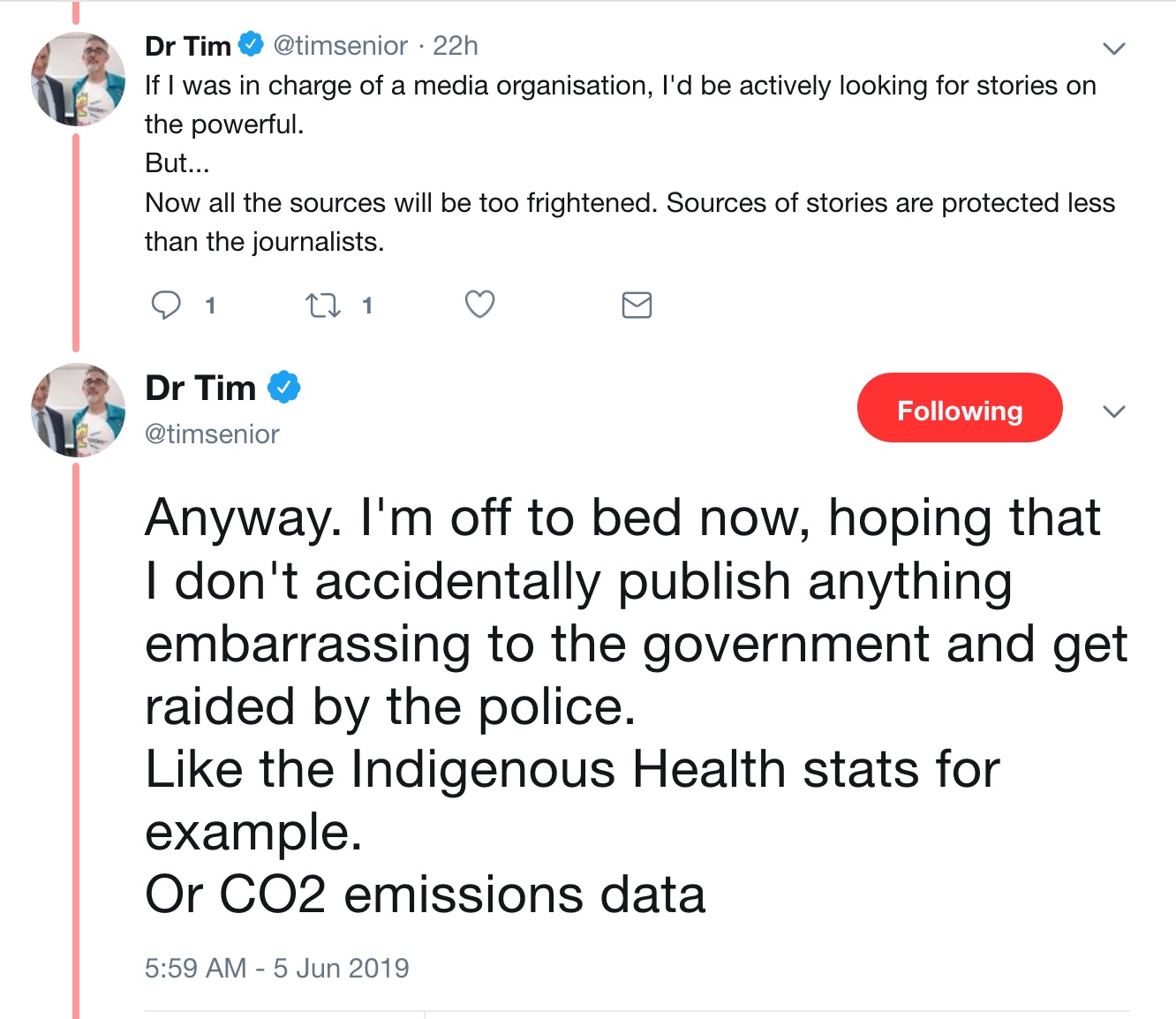 “Firstly, it is true, but disingenuous, for the Government and the AFP to say that the AFP weren’t operating on direction from the Government.

The Government – and both sides of politics are responsible for this – set the laws that the AFP are operating under. It doesn’t matter that a particular raid was or wasn’t directed by Government.

The laws mean that if you are a journalist, or worse, a source for a journalist, and you have a story that might embarrass the Government, then the laws have created an environment that means they can come after you. They have also enacted laws meaning they can use our metadata to find us. They have essentially set up a sort of panopticon. (Link: https://en.wikipedia.org/wiki/Panopticism )

Secondly, the whole direction of policy over the last few years has been towards a lack of transparency.

Remember “on-water matters,” the refusal of more FOI requests than ever, with reduction of FOI staff (link: https://www.theguardian.com/australia-news/2019/jan/02/how-a-flawed-freedom-of-information-regime-keeps-australians-in-the-dark), the witness K case, where the government is prosecuting the sources and ABC (not News) journalists for breaking a story of government corruption (Link: https://www.theguardian.com/australia-news/2018/jul/24/australia-urged-to-drop-witness-k-prosecution-due-to-chilling-effect-on-democracy), and the latest AFP raids.

The Government is very happy to leak information that suits its own agenda without fear of prosecution (Link: https://www.theguardian.com/australia-news/2019/jun/06/government-leaks-like-a-sieve-when-it-suits-them-critics-of-abc-raid-say), with the leak of an individual’s person Centrelink file after they spoke out about their experience being the most worrying example. (Link: https://www.abc.net.au/news/2017-02-28/watchdog-inquiries-after-centrelink-leaked-personal-information/8310034)

Thirdly, these raids also make me wonder about what health stories won’t get reported because of fear of AFP raids.

Remember when a staffer who was married to a lobbyist for junk food got the food star rating website taken down? (Link: https://www.smh.com.au/politics/federal/food-rating-fiona-nash-chief-of-staff-intervened-to-have-website-removed-20140211-32g3a.html).

Or the fiasco of the Indigenous Advancement Strategy? (Link: https://www.sbs.com.au/nitv/nitv-news/explainer/governments-indigenous-budget-strategy-blasted-failures-and-hundreds-millions-non)

Governments, purely because they are dealing with complex situations, will make mistakes and look stupid. However, we should expect competence and integrity, and where they are missing, we should expect to be able to find out. After all they do work for us!

The influence of big corporations on health policy – food companies, alcohol companies, pathology companies, private insurance companies – needs transparency if we are to trust that policy is made in the public interest, not the interest of shareholders. That’s not to say there’s anything corrupt happening.

These raids mean any potential sources who know what is happening will look over their shoulder and think carefully before leaking any information.

We can only be confident there is no corruption if we have transparency, and mechanisms that mean we can be confident wrongdoing will be exposed. We need to be able to see ministers diaries, to see the notes from meetings and briefings, to able to follow the decision making processes.”

We need to challenge the fiction that the government has not directed such action when it wrote and delivered legislation and policy with this end in mind.”

“As one of the first acts of this new Government, some time distant from the reportage concerned, there can be little doubt that the intent of these raids is intimidation of the press and those who risk a great deal to blow the whistle on wrongdoing.

It serves as a shot across the bow to the media, and — unprecedented in both nature and scale — will have a chilling effect on public interest journalism, which by its very nature, seeks to expose information and uncomfortable truths.

These standover tactics have no place in our democracy, and will only embolden vested interests and lobby groups in their efforts to bully and silence the media, a grim portent for those working in public health.

It is grim indeed to witness the arrival of Trumpesque media tactics on our shores, and we must not only condemn it in the strongest possible terms, but present a unified front of resistance for the health of our democracy.”

Rebecca Ananian-Welsh from the University of Queensland writes in The Conversation:

Against this background, the calls for a Media Freedom Act, such as by the Alliance for Journalists’ Freedom, have gained significant traction. It may take this kind of bold statement to cut across the complexities of individual laws and both recognise and protect the basic freedom of the press and the future of public interest journalism in Australia.”

Denis Muller, Senior Research Fellow in the Centre for Advancing Journalism, University of Melbourne, writes in The Conversation:

In their raids on media organisations, journalists and whistleblowers, the Australian Federal Police have shown themselves to be the tool of a secretive, ruthless and vindictive executive government.

…The point is that the politicians have constructed a repressive legal regime designed to protect the executive branch of government, impede accountability to the public and exert a chilling effect on the press.”

Muller said the stories revealed by whistleblowers and reporters targeted by the AFP and other security agencies included:

• Statement by Journalism Education and Research Association of Australia (JERAA)

Extract: “Members have noted in their research that Australian governments from both sides of politics have been keen to pass or amend anti-terror/national security legislation (60 plus laws since September 11, 2001), which has laid the foundation for the legal intimidation we have witnessed in the last few days.

These laws, in combination with the draconian sections in our criminal codes limiting public servants’ ability to communicate maladministration and corruption to journalists, has created very serious challenges for whistle blowers and journalists. We now have a situation where whistle blowers are pursued instead of thanked for their bravery. The federal Australian government has increased its attempts to ‘kill the messengers’, instead of dealing with the problems the messengers point out.

This sort of behaviour from authorities is not worthy of a mature liberal democracy and is an international embarrassment for Australia.

The JERAA executive notes that JERAA members have been contacted by reporters from international news organisation seeking their expert comments on the raids. These news organisations have expressed disbelief that such raids on public interest journalism can take place in a long-standing liberal democracy.

The Columbia Journalism Review news editor Jon Allsop has noted that ‘Raiding a newsroom, setting up camp there, and combing through its internal files—with the right to edit and delete them—is the sort of thing that happens in a police state, not an established democracy’.”

• Croakey is running an ongoing series to encourage wider understanding of public interest journalism as an important upstream determinant of health.

PrevPreviousWhen the dead are as present as the living: psychiatry and the pathologising of culture
NextThe Ngadhuri-nya process for engaging Aboriginal and Torres Strait Islander people in data linkage researchNext