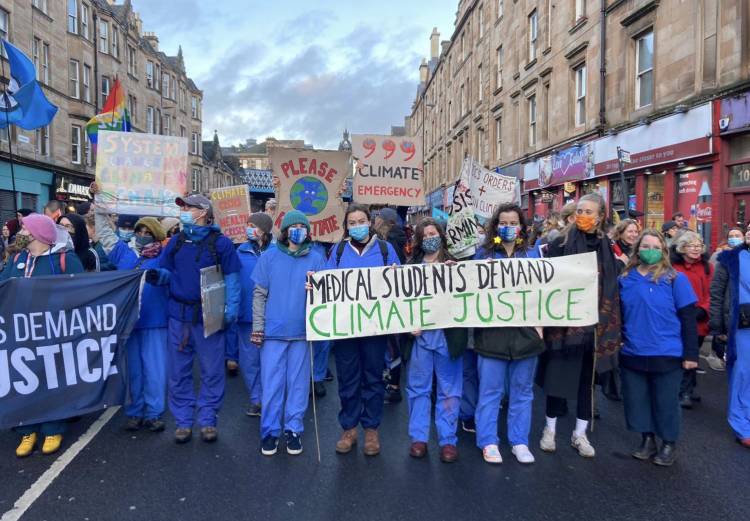 Australia left behind in the race to tackle healthcare emissions

In significant news from the COP26 meeting in Glasgow, 50 national governments have pledged to develop climate-resilient and/or low carbon, sustainable health systems.

This includes 14 countries that have committed to develop net zero health systems, setting targets ranging from 2035 to 2050.

Climate and health leaders have welcomed the news as “historic” and “a tremendous pivot” for the healthcare sector.

Australia, however, has not signed up to any such commitments – perhaps not surprising, given the Federal Government’s longstanding failure to engage with climate and health policy.

A COP26 Health Programme briefing document says the health sector is a substantial contributor to greenhouse gas emissions, accounting for around 4.6 percent globally. In Australia, healthcare contributes about seven percent of emissions.

The commitments were made as part of the COP26 Health Programme, a partnership between the UK Government, the World Health Organization (WHO), the United Nations Framework Convention on Climate Change (UNFCCC) Climate Champions and health groups, such as Health Care Without Harm.

“The future of health must be built on health systems that are resilient to the impacts of epidemics, pandemics and other emergencies, but also to the impacts of climate change, including extreme weather events and the increasing burden of various diseases related to air pollution and our warming planet,” said Dr Tedros Adhanom Ghebreyesus, Director-General of the WHO.

“Health systems must also be part of the solution, by reducing carbon emissions. We applaud those countries that have committed to building climate-resilient and low carbon health systems, and we hope to see many others following their lead in the near future.”

Speaking from the COP26 meeting, Josh Karlin from Healthcare without Harm said that 9 November was an historic day because of the commitment to tackle global healthcare emissions.

Now it was important to turn “ambition into action”, and these “paper commitments into practice”, he said. 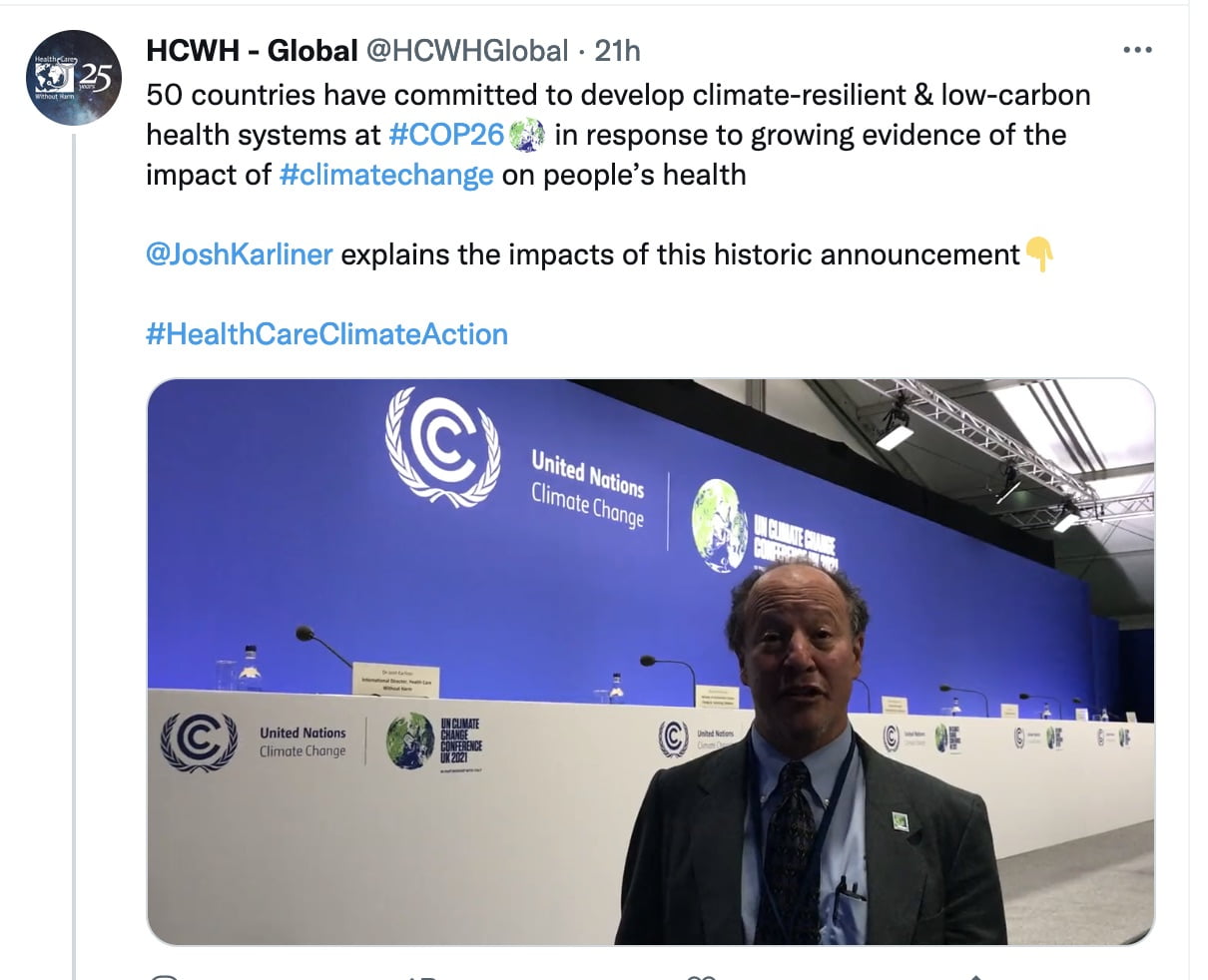 Also speaking from the COP26 meeting, Dr Nick Watts, the NHS Chief Sustainability Officer, said in 2020 only one healthcare system had committed to net zero – the NHS.

This had all changed with the “exciting and important” COP26 commitments, with 14 healthcare systems, including Indonesia, Spain, Nigeria and Belgium, now committing to net zero.

“This is the moment it shifts from possible to positive to inevitable,” he said. 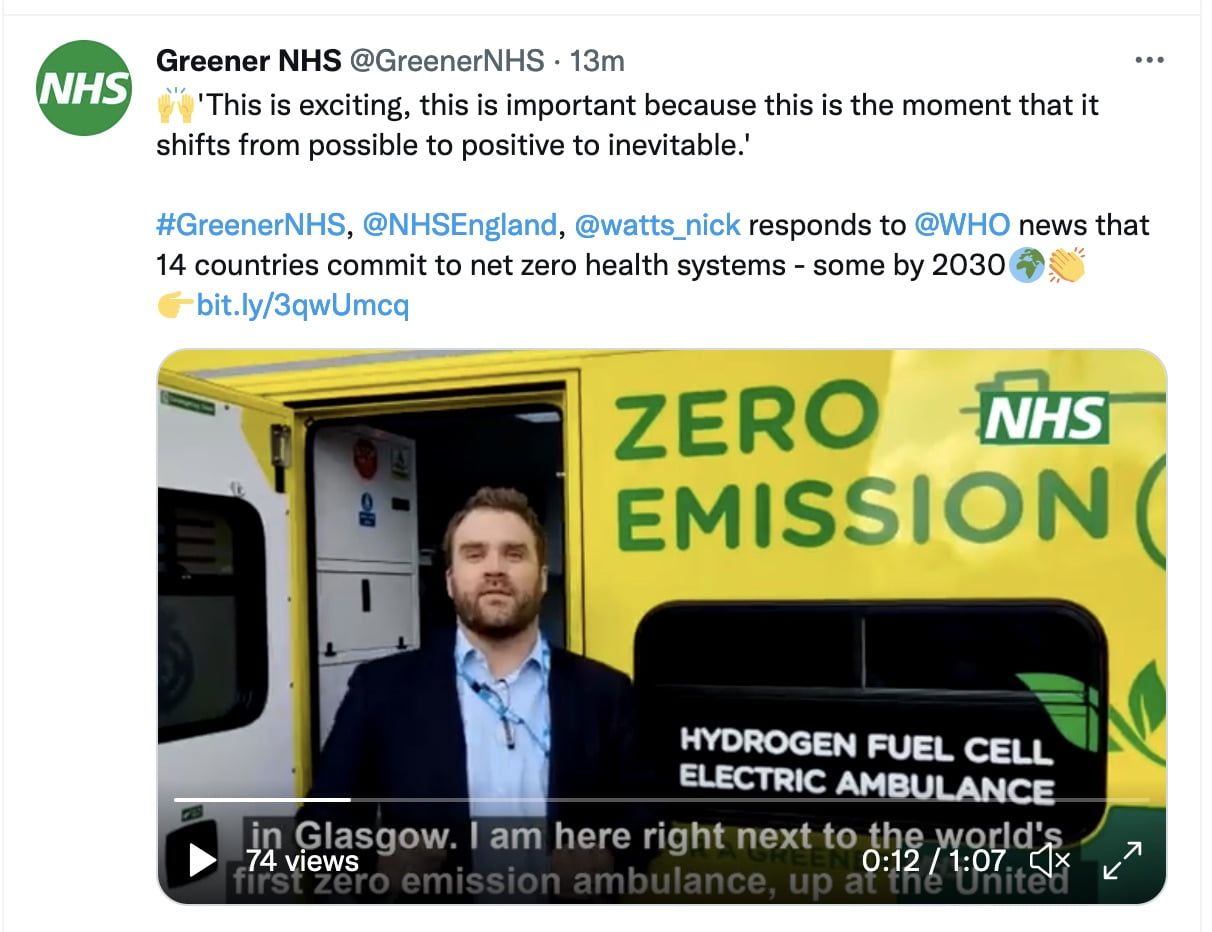 Fiona Armstrong, executive director of the Climate and Health Alliance, said the news was “very exciting”, and that in addition, 54 institutions from 21 countries representing more than 14,000 hospitals and health centres had joined the UNFCCC Race to Zero and committed to achieving net zero emissions.

The fact that no Australian governments have pledged to being part of this commitment opportunity is disappointing – especially since at least at the state and territory level, there is strong appetite and a great deal of work going on ‘on the ground’ to decarbonise healthcare.

As so many have remarked in relation to climate commitments in Australia, just saying you’re going to get there, doesn’t make it so – therefore we need well considered plans on how the health sector will in fact achieve this transition in Australia.”

Armstrong warned that Australia would find itself out on a limb if it didn’t act more quickly.

“The NHS is demanding net zero commitments from all its suppliers by 2026 – beyond which they will not be able to win contracts to supply the NHS with medical devices, equipment or services. With a 9 billion pounds per annum procurement budget, this is a big deal and at least 20 of NHS’s biggest suppliers have already committed,” she said.

“The Federal Government, with its significant investment in primary healthcare and aged care, also carries significant risk from failing to invest in decarbonisation efforts – without moving in concert with health services around the world, Australia risks becoming a dumping ground for outdated health and medical technologies and products, just like we have for the car industry.”

A spokesperson for Doctors for the Environment Australia, Dr Eugenie Kayak said: “Doctors have called on the Australian government to lead on urgent, meaningful action on climate mitigation, yet once again the recent omission at COP26 of Australia from committing to action within the healthcare sector shows the government is not willing to lead to protect health and save lives.

“Australia’s healthcare system faces significant challenges. The burden of chronic diseases is rapidly increasing, our population is ageing, and climate change which is already having an impact is predicted to further threaten our health and wellbeing.

“The Australian Medical Association (AMA) and DEA have called for our healthcare sector to be net zero by 2040 with an 80 percent reduction of emissions by 2030.”

Meanwhile, an open letter signed by 600 organisations, representing 46 million nurses, doctors and health workers worldwide was formally handed over to Gillian Keegan, UK Minister of State for Care and Mental Health, Wendy Morton, UK Minister for European Neighbourhood and the Americas and Khaled Abdel Ghaffar – Minister of Higher Education and Minister of Scientific Research of Egypt, representing the presidencies of COP26 and COP27.

The letter, delivered as COP26 delegates gathered for the Climate Action for Health event, warns the climate crisis is the single biggest health threat facing humanity and calls on world leaders to deliver on climate action.

In closing remarks to the Climate Action for Health Event at COP26, the UK Health Minister Gillian Keegan said there was a time when people might have wondered what a health minister was doing at a summit about climate change.

“But those days are gone,” she said. “There is now widespread recognition including here of course in the room today that climate change isn’t just an environmental emergency. It’s a global health emergency too. According to the UN, climate change is expected to cause around 250,000 extra deaths a year between 2030 and 2050.

“And we know that climate change affects so many of the things that make us safe and healthy today. The air we breathe, the water we drink and how safe and secure we feel in our communities. Our health and our environment go hand in hand, it’s clear.”

Read the rest of her speech here, and then perhaps send a copy to Australia’s health ministers. Clearly they need some inspiration. 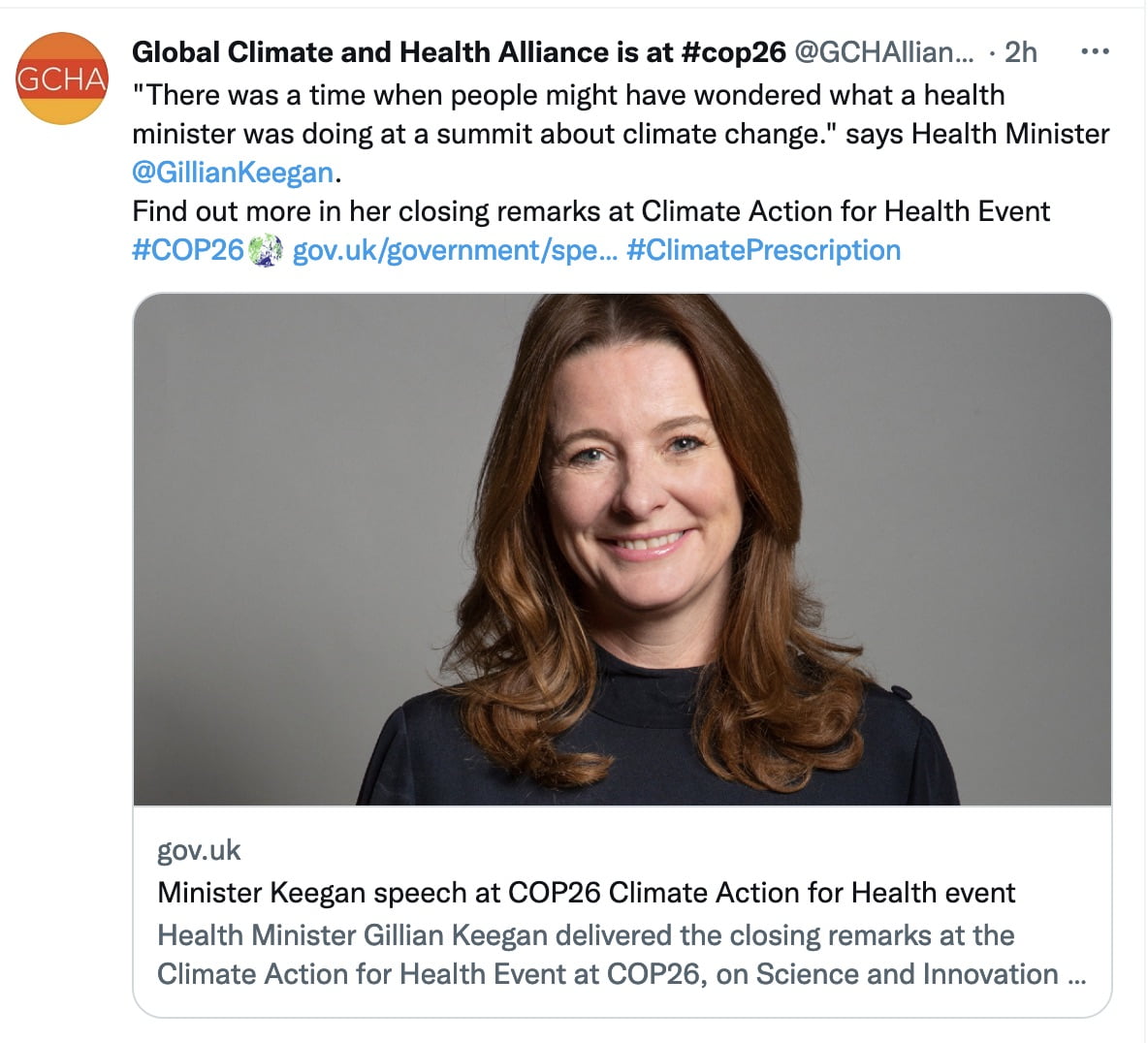 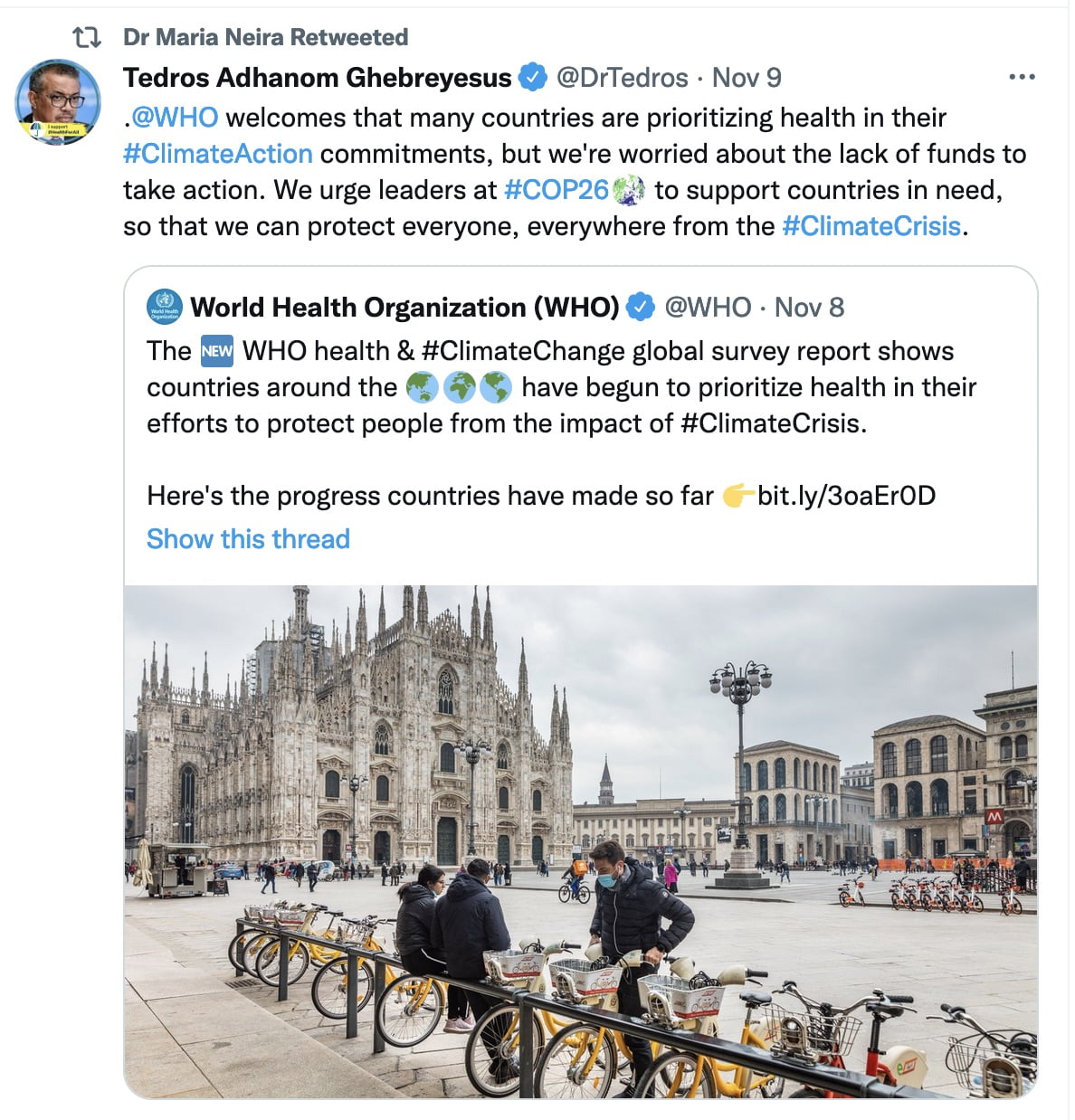 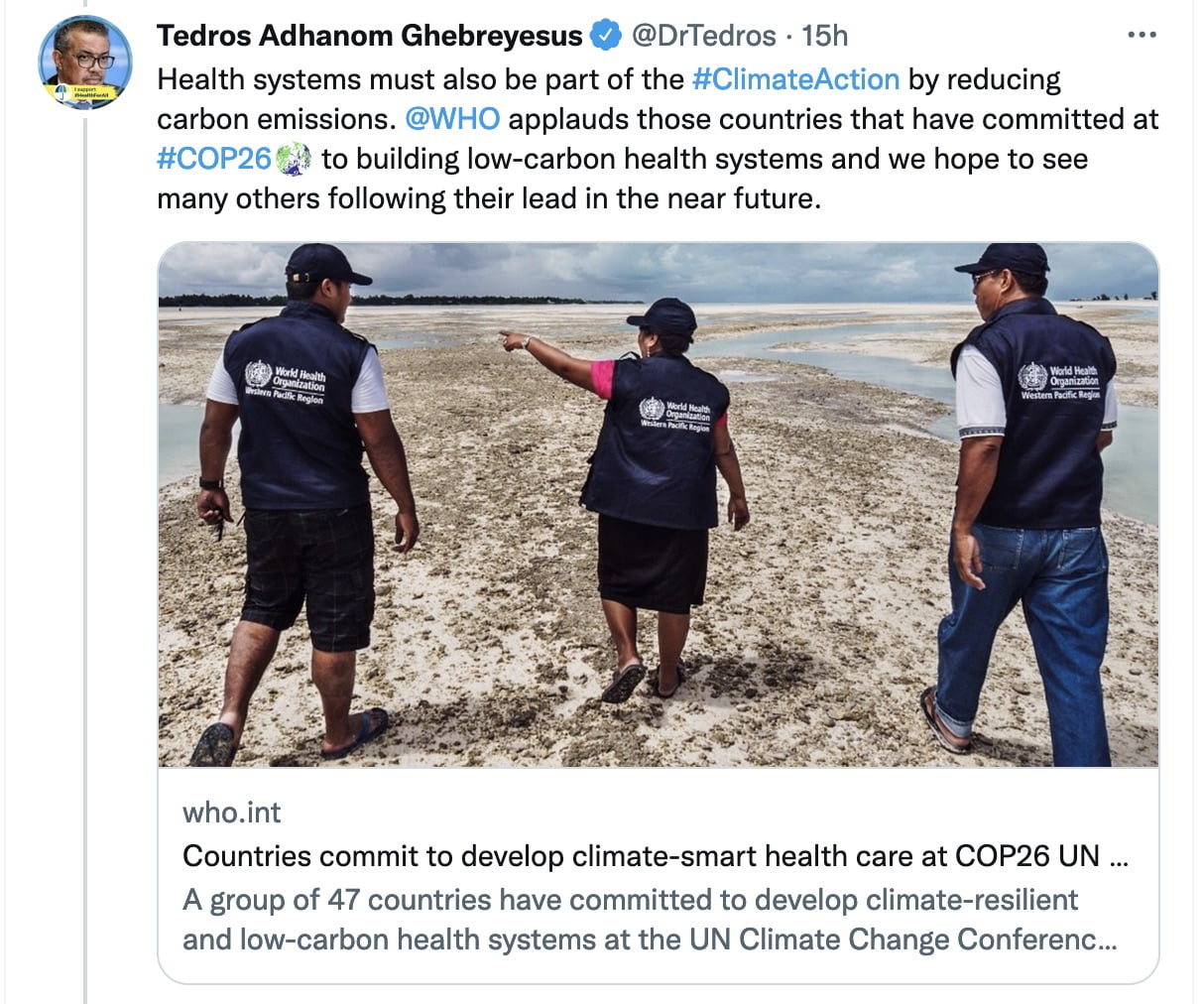 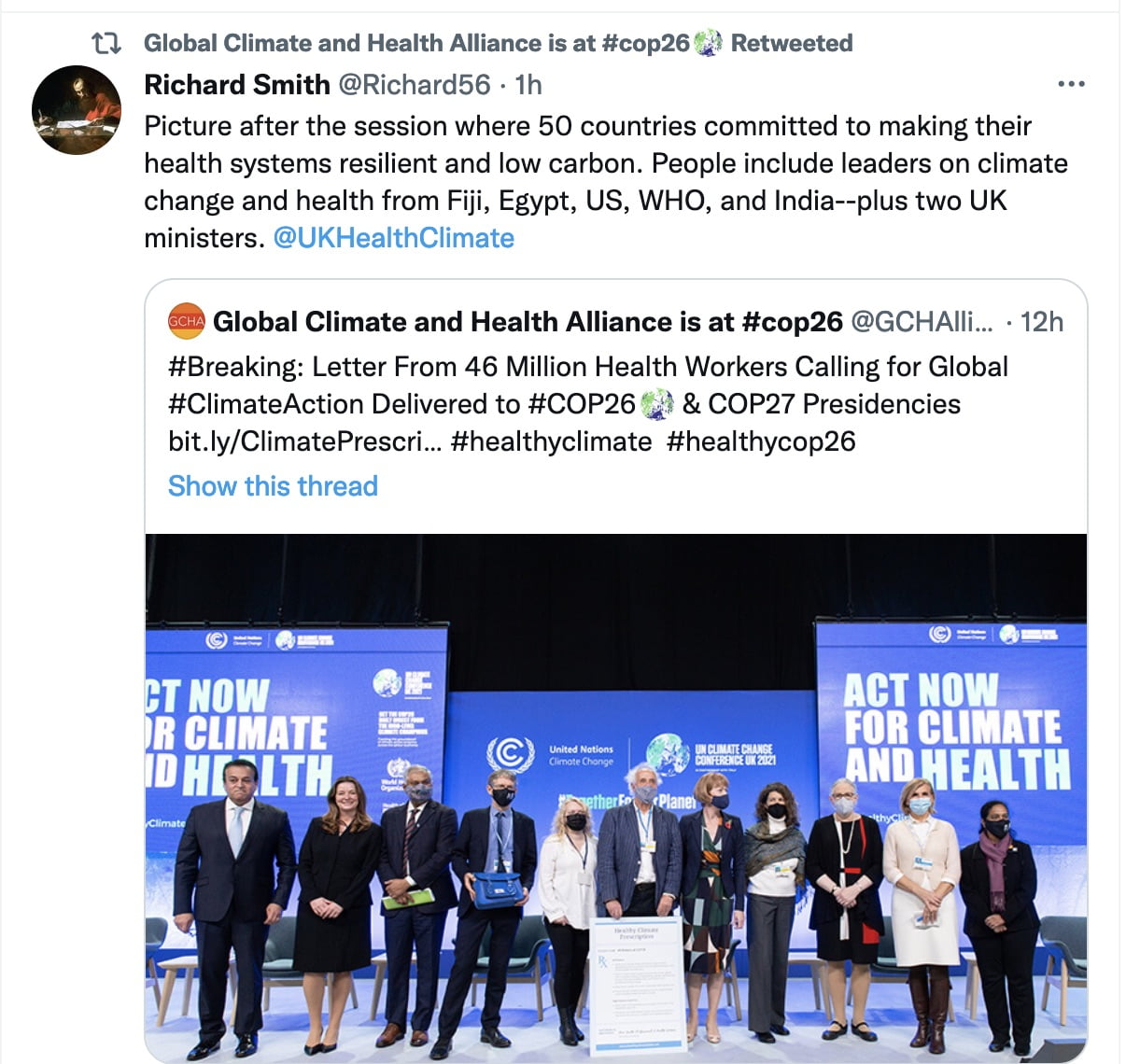 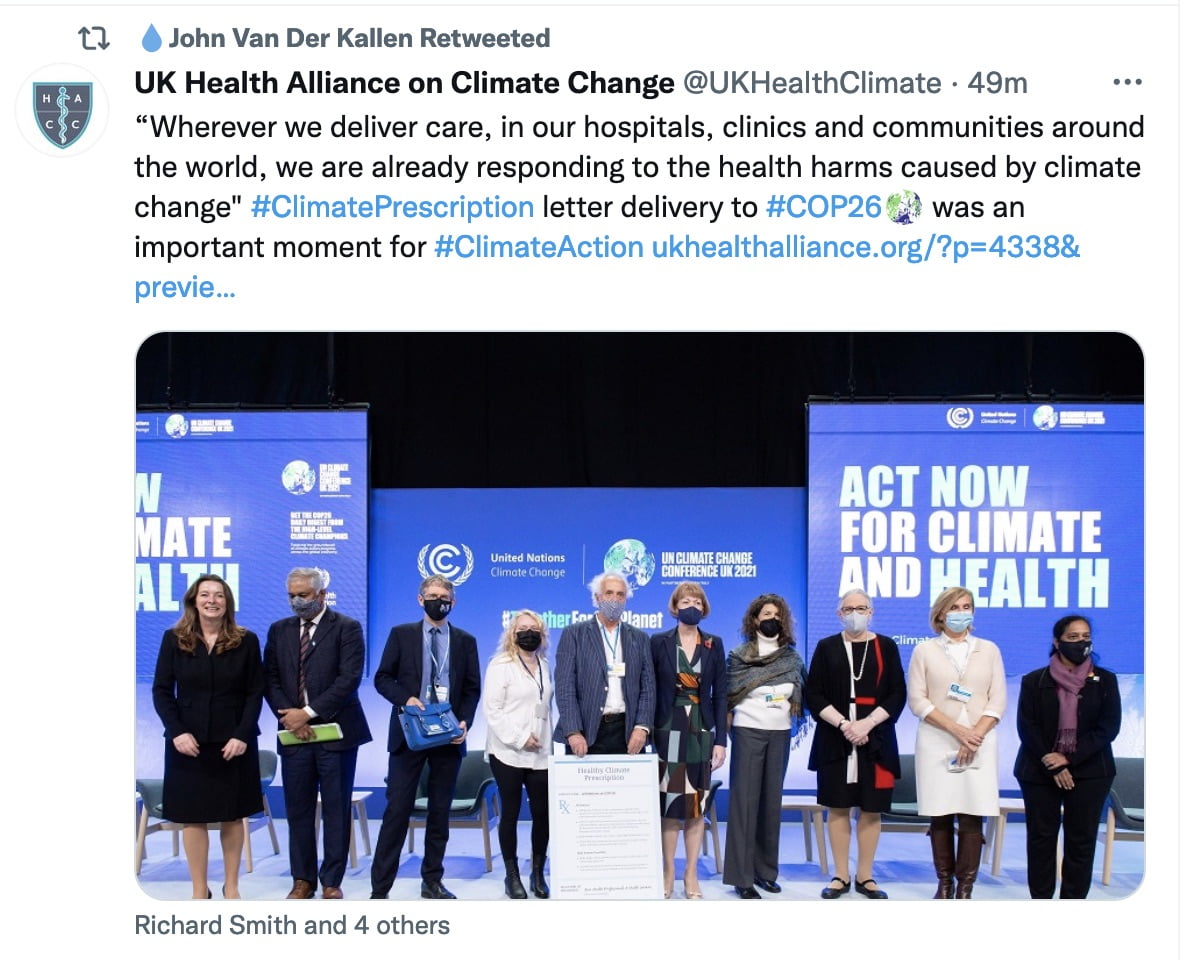 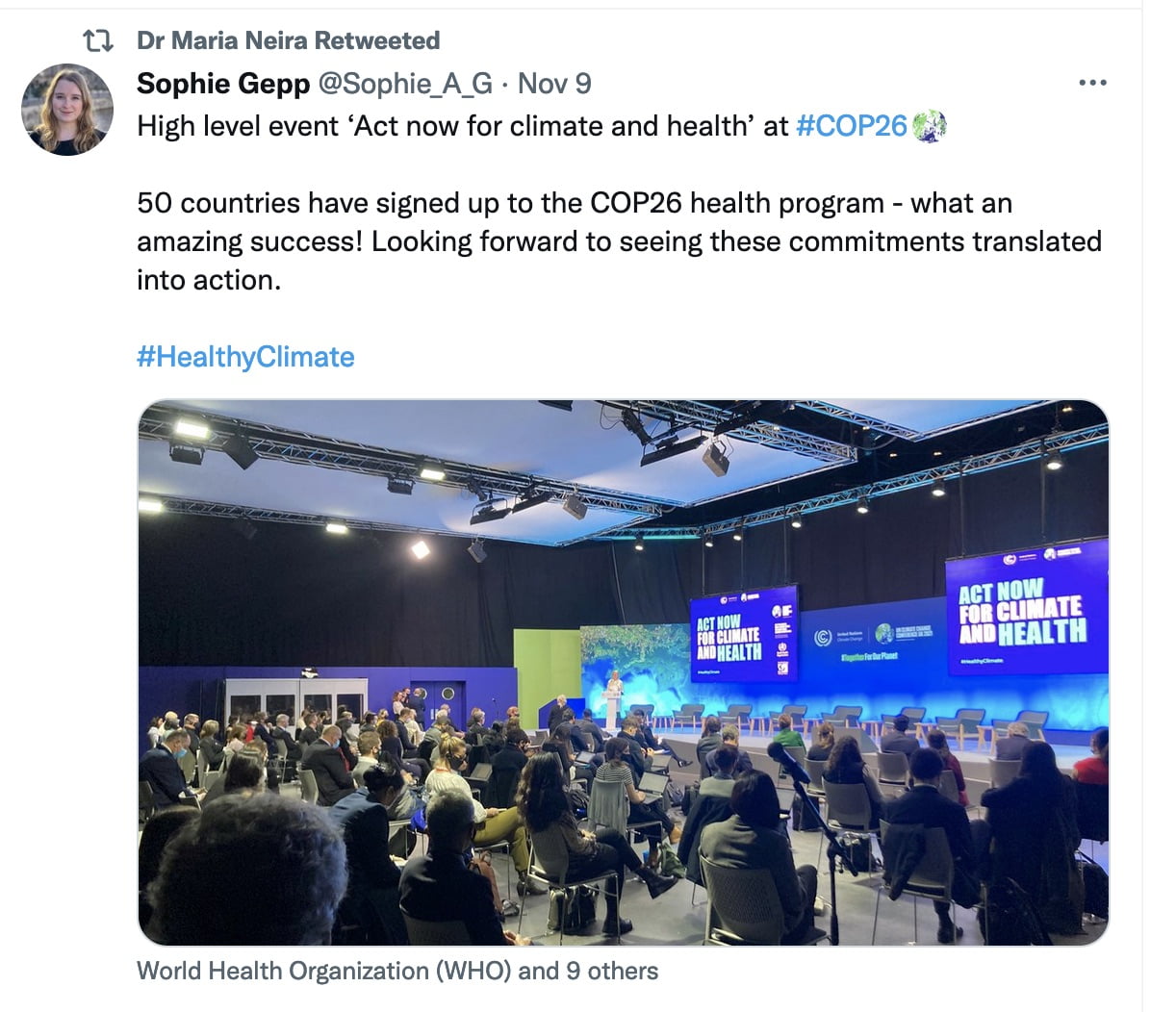 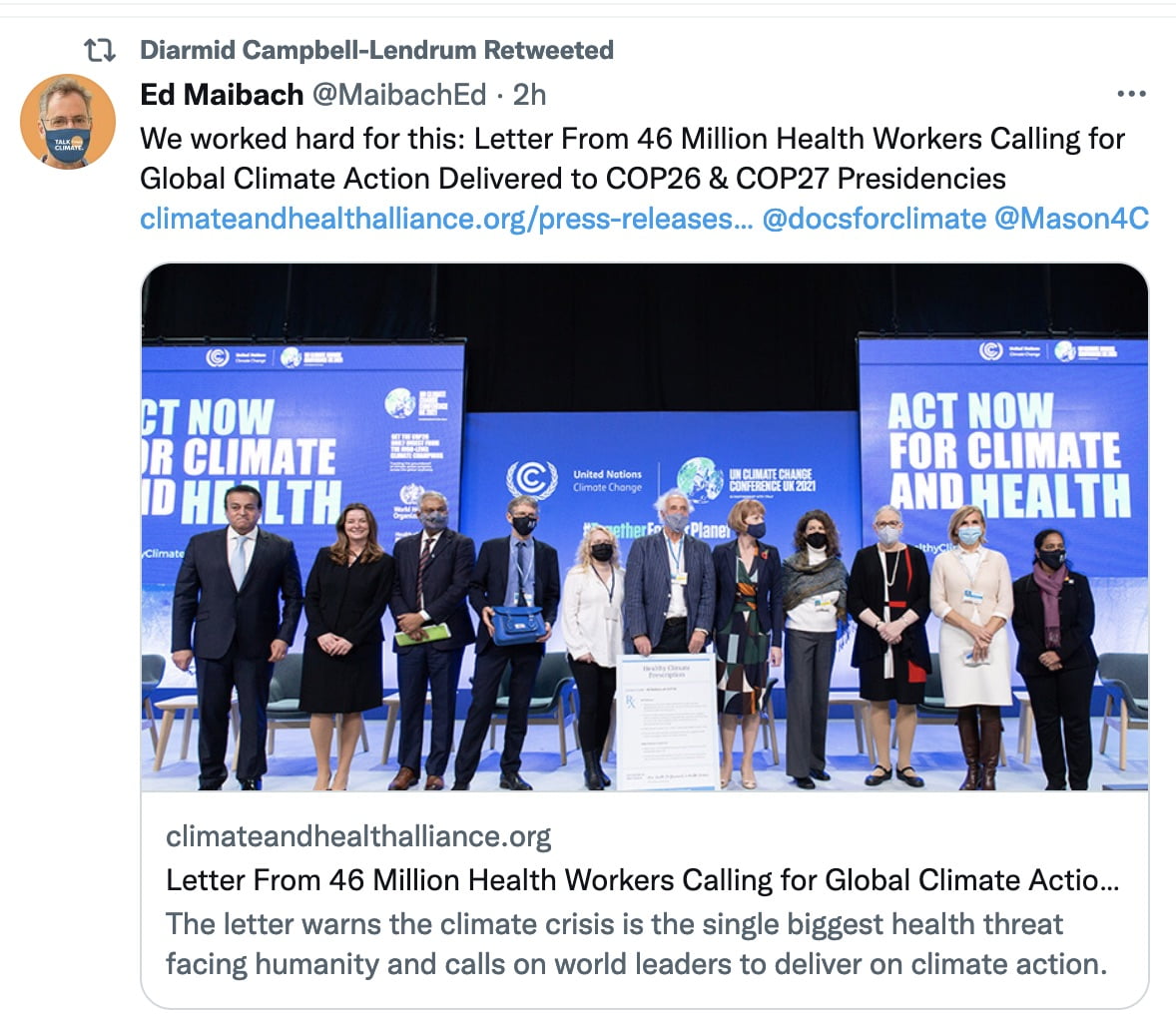 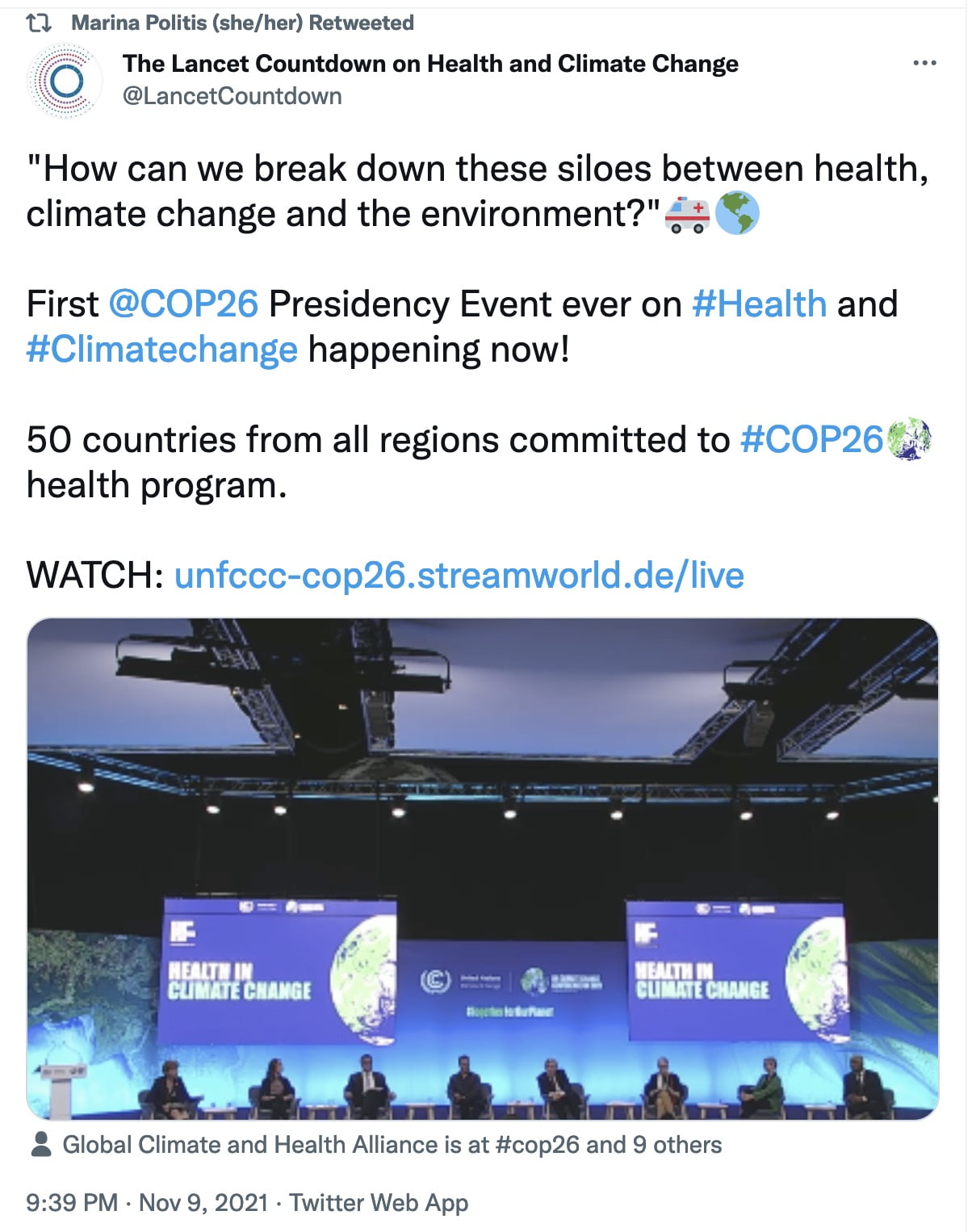 Meanwhile, as the COP focus shifts to transport… 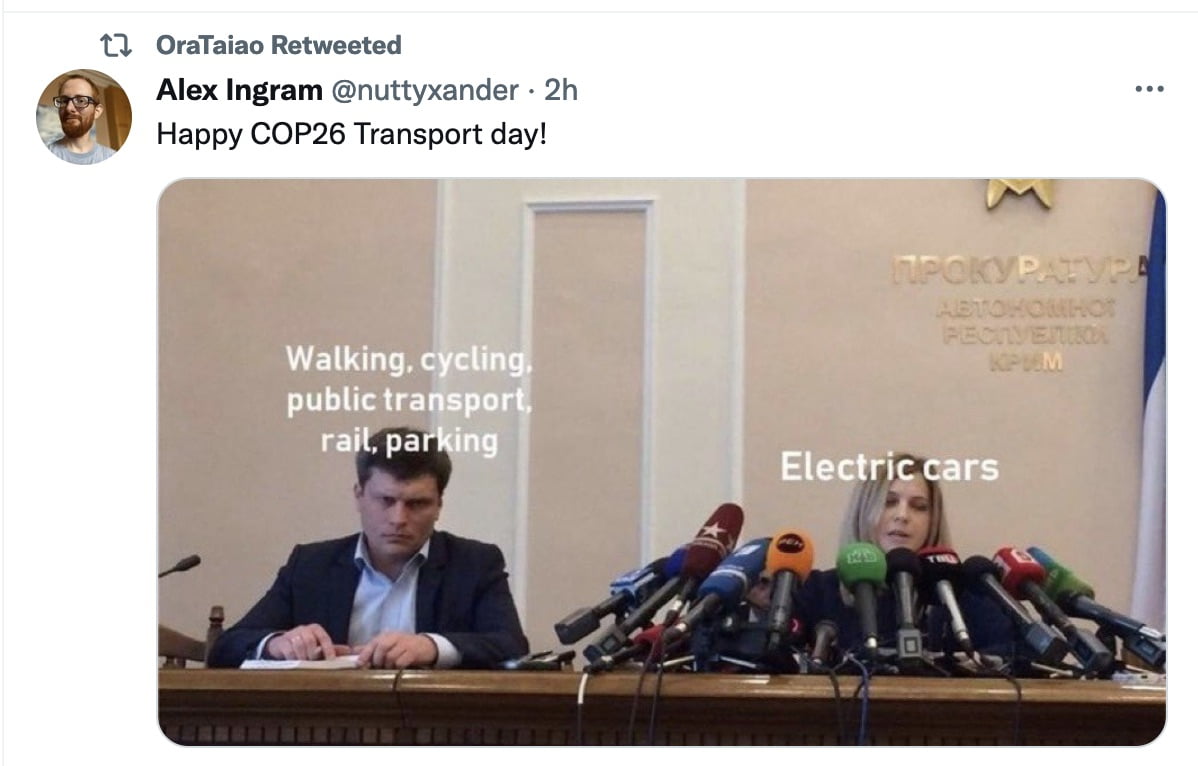 This article is part of the #HealthyCOP26 series, which is being published in partnership with the Climate and Health Alliance. This article is also part of Croakey’s contribution to the Covering Climate Now initiative, an unprecedented global media collaboration launched last year to put the spotlight on the climate crisis. Croakey Health Media is a member of the collaboration, which was co-founded by The Nation and the Columbia Journalism Review (CJR), in partnership with The Guardian.