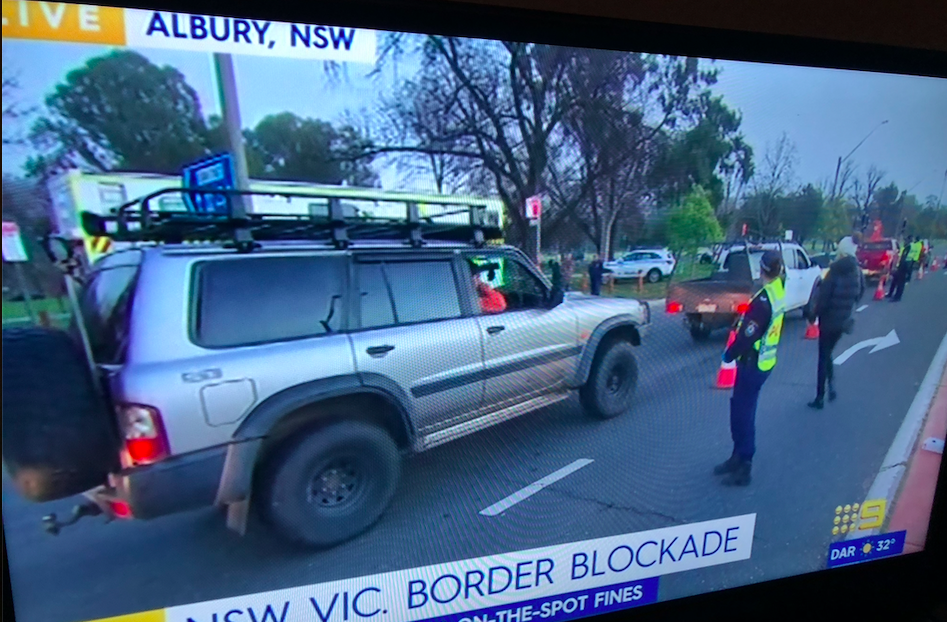 Australia on COVID-19 alert as Melbourne locks down again

The Victorian Government has been urged to be transparent on the factors behind an escalating outbreak that has sent five million Melbourne residents back into lockdown for the next six weeks and tougher border restrictions for Victorians across the country.

Melbourne-based federal Liberal MP Dr Katie Allen told ABC Radio National that Labor Premier Daniel Andrews had “done exactly the right thing” by moving quickly back into Stage 3 lockdown for Melbourne and the regional Shire of Mitchell in response to the current spike in COVID-19 cases.

But Allen, a paediatrician and former medical researcher, said it was important to know “what was the breach in the defence originally so that not only can we repair that defence but we can make sure the other states and territories don’t have the same problem”.

Asked whether the political heat needed to be turned down for Andrews, who has been under attack through the pandemic by the Liberal Opposition, Allen said “Victoria’s success in containing this outbreak will be Australia’s success, so we all need to work together”.

Allen’s comments come amid continued uncertainty for what new border controls between New South Wales and Victoria might mean for health services along the 1,000 kilometre border, particularly for Albury Wodonga Health. Its specialist campuses are split between the regional cities, with intensive care only available in Albury, and maternity and obstetrics and gynaecology services in Wodonga.

In Melbourne, residents and health organisations are raising ongoing concerns about the “heavy handed” hard lockdown of 3,000 tenants of nine Melbourne public housing tenants, who are still living under police guard and not permitted out of their apartments for any reason unlike restrictions imposed on the rest of Melbourne.

Declaring that the full lockdown of Melbourne “should have happened weeks ago”, leading epidemiologist Professor Mary-Louise McLaws said the “hard lockdown” of public housing tenants risked eroding trust in government responses because it had not been done in a compassionate manner and “lacks epidemiological sense”.

“Forcing people into even closer quarters creates a pressure cooker environment where family outbreaks are even more likely,” she said, urging that people in the public housing towers who test positive to the novel coronavirus be relocated to hospitals or other health facilities.

Andrews announced the new lockdown as Victoria reached “a grim new milestone” on Tuesday of 191 new cases of coronavirus, the highest to date in the pandemic, and declared the state “on the cusp of our second wave”. On Wednesday it added another 134 new cases, to put currently active cases for the state at 860, with 456 of those cases possibly indicating community transmission.

Residents who are back under State 3 lockdown are permitted to leave home only for essential shopping, to provide or get care, limited exercise and work or education. Police will from midnight on Wednesday enforce a ‘hard boundary’ with regional Victoria, which, apart from Mitchell, is not subject to the new restrictions but have been included in bans or tougher restrictions from other states and territories.

Tasmania took a tough stand, declaring that Victorians and anyone who is not a Tasmanian resident who has spent time in Victoria in the 14 days prior to travel are not permitted to travel to Tasmania and will be turned back at their own expense, unless they have pre-approval for travel as an essential traveller or for compassionate reasons.

Victoria last week set up a judicial inquiry to examine the operation of Victoria’s hotel quarantine program for returning travellers, saying a number of cases of coronavirus in the community had been linked through genomic sequencing to an infection control breach in the program.

Questions have been asked around due diligence within government procurement processes, amid reports private security companies were engaged without a formal tender process and selected with just 24 hours notice.

The Victorian inquiry is not due to report until September 25. By contrast, Tasmania’s health authorities produced an interim report within a few weeks into the outbreak in the state’s north-west, which closed down two hospitals in April. New South Wales held public hearings about the major spread of infection from the Ruby Princess cruise ship.

Allen said: “I’d like to know what went wrong with the quarantine in the hotels so we can make sure it doesn’t happen again and all of Australia can stay safe.”

Albury medical oncologist Dr Christopher Steer told Croakey there has been much “fear and concern” from patients in his unit on hearing that the NSW border will be closed to Victorians, for the first time in 100 years.

While the introduction of telehealth services had meant he could “pivot” immediately to virtual consultations for many patients, Steer was concerned that disruptions to services will lead to fewer people seeking treatment and diagnosis because they are fearful of coming to hospitals, as happened with national lockdowns in March.

That’s also a big concern for the National Rural Health Alliance, which also nominated concerns about access to healthy and affordable food in the region if supply chains are interrupted or incomes drop.

CEO Gabrielle O’Kane told Croakey it was also crucial that Aboriginal communities near the border are able to continue to get the services they need and sufficient communication from government.

“It’s important that people know that they can leave the house for medical care and that the process for crossing the border if they need to is straightforward and simple,” she said.

Independent MP Helen Haines, based in nearby Wangaratta, has called on NSW Premier Gladys Berejiklian to “provide an iron-clad guarantee” that no Victorian will be prevented from crossing the border to access healthcare or for work, education or compassionate grounds.

Haines is among many asking why the border could not have been drawn either north of Albury or south of Wodonga, or even around Melbourne to preserve cross-border interdependence, not just in the bigger regional centres but also other ‘twinned’ communities like Mildura/Gol Gol, Robinvale/Euston, Echuca/Moama & Yarrawonga/Mulwala.

That may yet come. With two COVID-19 cases now confirmed in Albury/Wodonga, and a teenager from Victoria testing positive on the NSW South Coast, Berejiklian has urged NSW residents not to visit Albury and said she is prepared to tighten restrictions further.

Steer says Albury health services have always looked more to Melbourne than Sydney, but he just wants authorities to make a choice of one side or the other. “Just don’t make poor patients or poor people go from side to side,” he said. “We want seamlessness.”

Jill Gallagher, CEO of the Victorian Aboriginal Community Controlled Health Organisation, is most worried about some Aboriginal communities in NSW which rely on community controlled health services across the Murray River in Victoria.

Gallagher told Daniel James on community radio 3RRR that these are “scary times” also for a lot of Aboriginal families who live in the Melbourne public housing towers in Flemington and North Melbourne but that VACCHO and other Aboriginal legal and community groups had set up crisis supports around them.

The ‘hard lockdown’ at the nine towers was announced originally for five days, until all residents could be tested.

In a series of tweets on Wednesday night, Victoria’s Health and Human Services Department urged people who know residents to let them know that testing “will be completed tonight and results will be communicated soon”. But it added  that “until we have those results and develop a clear plan to support anyone who tests positive or is a close contact, please remain in your home.

In response to concerns that public housing residents living in crowded quarters cannot safely isolate, a spokesperson for Health Minister Jenny Mikakos told Croakey that alternative accommodation “can be arranged” but did not say where nor whether or not any residents had opted for this.

Responding to a series of questions about arrangements for the tenants, the spokesperson said two field emergency management units have been established at the tower sites, staffed by medical workers, GPs and nurses, with pharmacotherapy and medicines, and with mental health and drug and alcohol support from peer-support workers and clinicians.

In addition, the Royal Melbourne Hospital has partnered with St John Ambulance to establish a 30-bed urgent care clinic at the Melbourne Showgrounds “to provide critical and comprehensive first aid to residents if needed”, they said.

Asked about what new protocols are now in place in other public housing towers, the spokesperson said cleaning services had been “ramped up” with a schedule of complete deep sanitation cleans at all 44 high rise public housing sites. The Minister’s office did not respond to questions about new protocols for other at risk housing facilities, such as boarding houses and immigration detention facilities, including the privately guarded hotel holding refugees from Manus and Nauru. 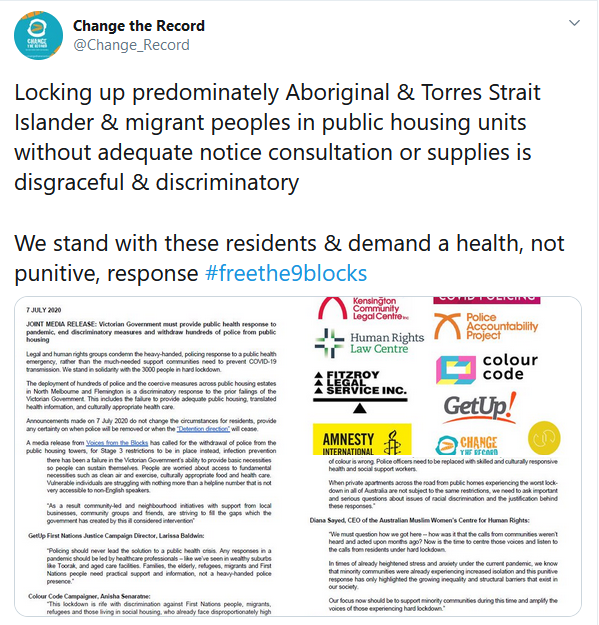 A number of leading legal and human rights groups this week issued a joint statement (see tweet, above) in response to the hard lockdown of the public housing towers, the harshest measures taken in the general Australian community in the pandemic so far, calling for a withdrawal of hundreds of police from the towers.

Premier Andrews has come under fire by some commentators for criticising the behaviour of some individuals and families. Blame and abuse has also been directed in mainstream and social media at people from different cultural communities and at public housing tenants.

Melbourne surgeon Dr Neela Janakiramanan, who has led campaigns on health and wellbeing for refugees and asylum seekers, has urged politicians, media and communities to “stop blaming ‘rule-breaking’ individuals and examine the lack of diversity in decision-making instead”.

Writing for Women’s Agenda, Janakiramanan said diversity at the table means there “will always be a set of eyes and ears on all critical decisions, to make sure that holes in any response are not being missed”.

The Victorian Health Department has also come under fire, described “as one of the worst-funded and dysfunctionally organised (departments) in the nation” by Professor Lindsay Grayson, who is Director of the Department of Infectious Diseases & Microbiology at Melbourne’s Austin Health. 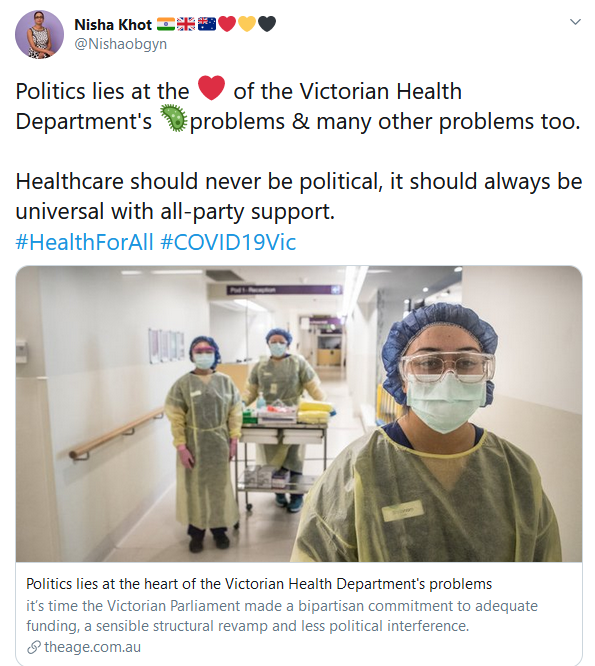 In an Opinion piece in The Age, Grayson said Victoria’s Department lacks the overarching health structure and clear lines of authority, a central source of guidelines and standards, and central oversight that other states and territories have.

“Victoria’s (Chief Health Officer) job is now one of the least attractive in the nation – partly because the inherent structure to implement effective health programs is so shallow, and also because successive CHOs have become fair game for personal political attacks,” he said.

Australian Defence Force soldiers are being deployed to help police to set up rolling checkpoints to stop Melbourne residents from travelling into rural and regional areas. were late on Wednesday preparing to help ma

Emeritus Professor Gerard Fitzgerald from the School of Public Health at the Queensland University of Technology said the public health workforce also needs to be expanded rapidly to handle the increased workload, with possibilities including other states and territories could provide support, or recruitment from public health students.

So public health workers need all the help and support the Australian community can provide.” 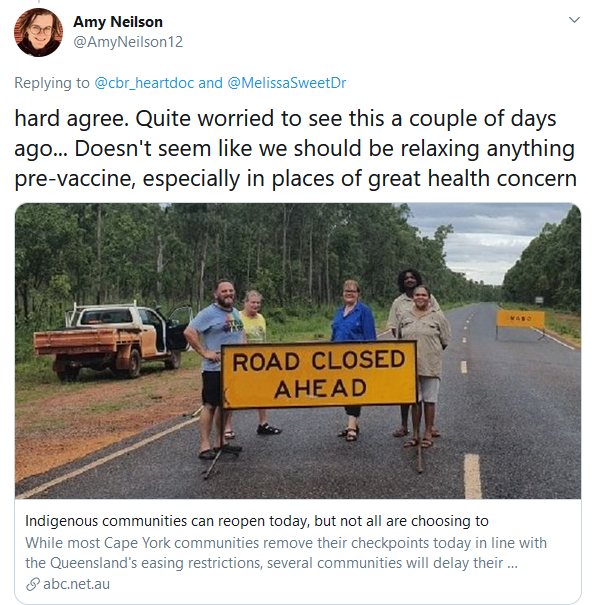 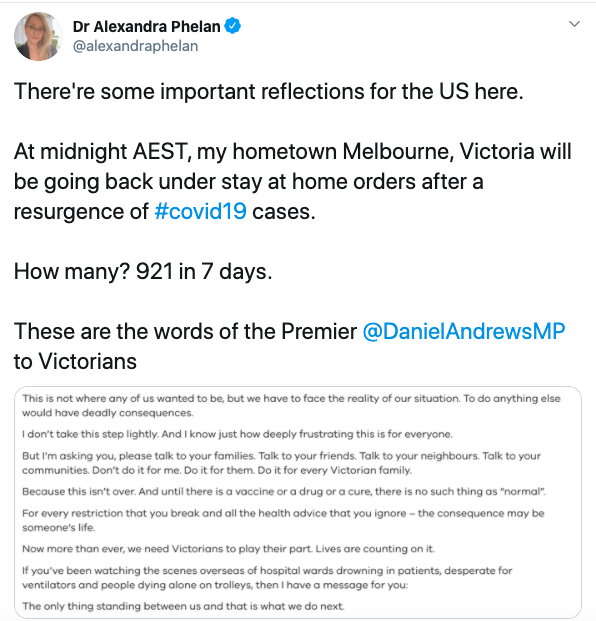 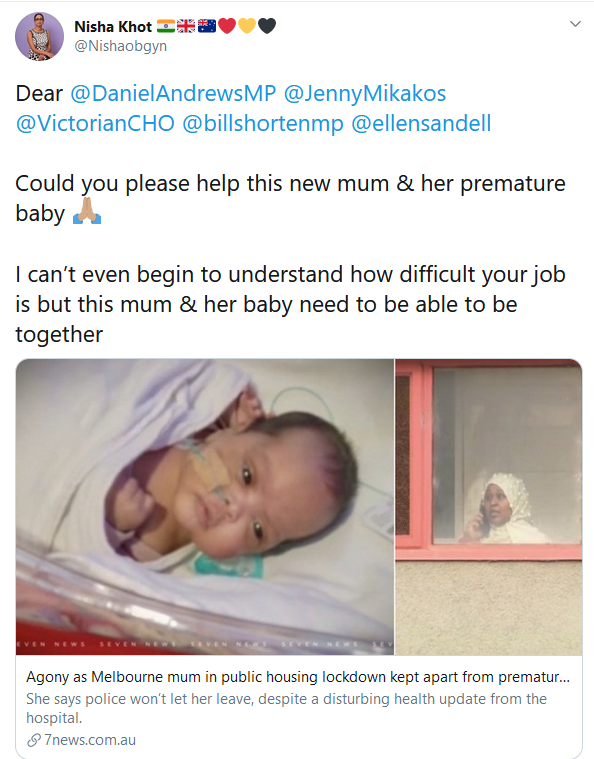 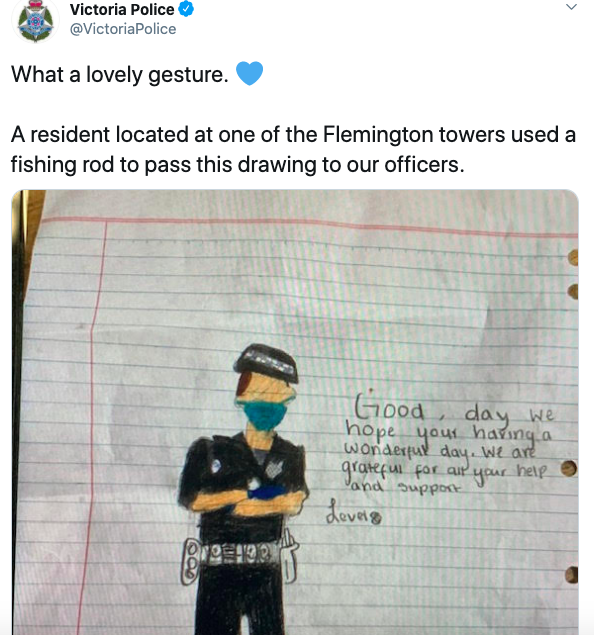 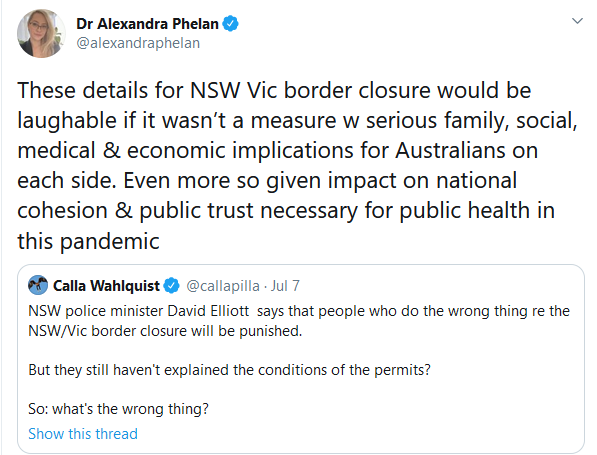 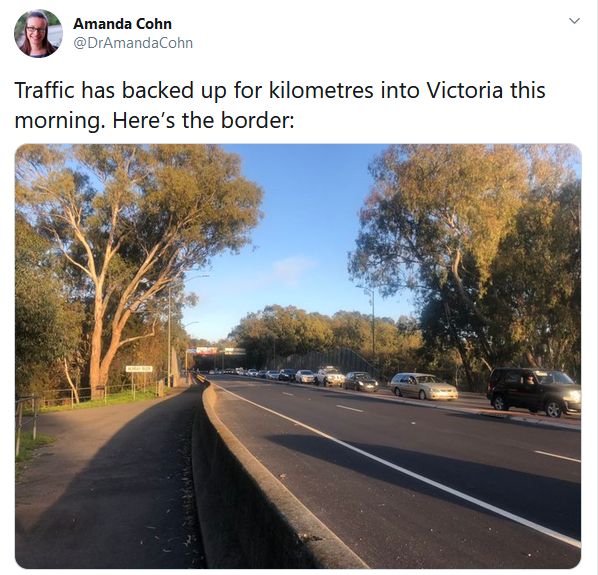 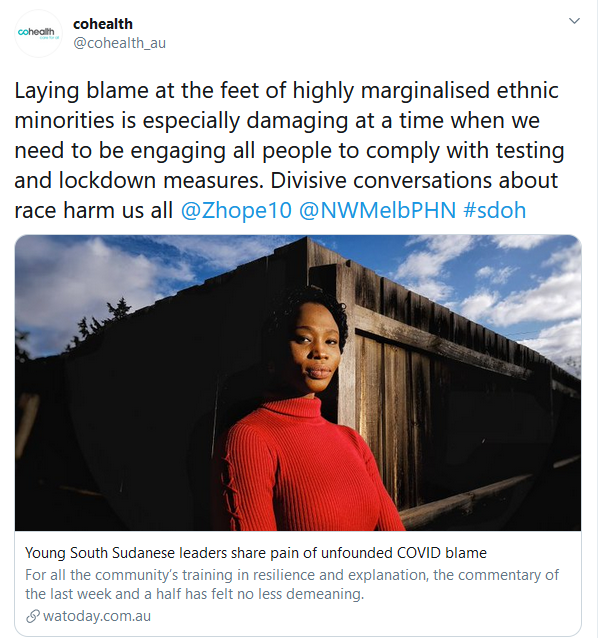 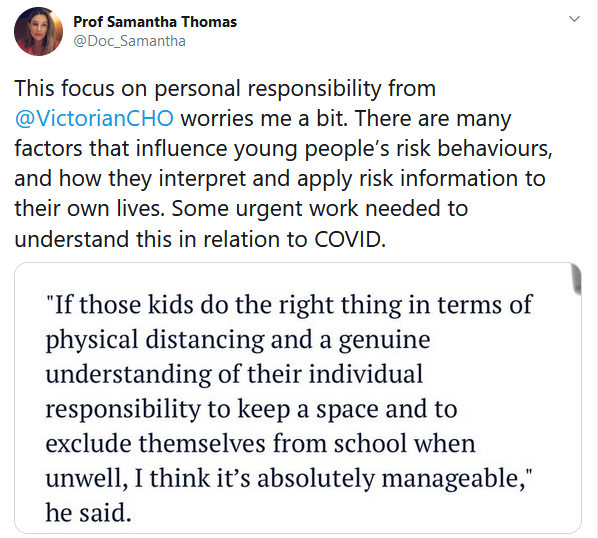