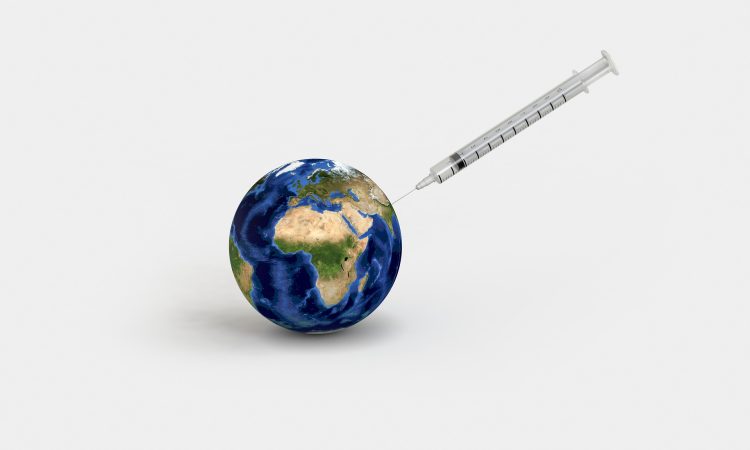 Action needed to address global inequities in access to COVID vaccines and treatments. Photo by Arek Socha of Pixabay.

Introduction by Croakey: For the past 20 months, proposals to waive the monopoly rights on COVID vaccines and related products have been the focus of negotiations at the World Trade Organization (WTO). Supported by more than 100 governments, the original proposal by India and South Africa applied to all forms of intellectual property, technology and expertise and to all forms of COVID vaccines, treatments, diagnostics and related products.

The proposal held significant promise in addressing the intellectual property barriers that are preventing countries from increasing the global supply of vaccines and treatments – but opposition by a small but powerful group of high-income countries has skewed negotiations to an unworkable and restrictive proposal.

Australia should not support measures that create more barriers to global COVID vaccine production and supply, and should instead take action to advance equitable access worldwide, write Dr Belinda Townsend from The Australian National University, Dr Brigitte Tenni from The University of Melbourne and La Trobe University, and Professor Deborah Gleeson from La Trobe University.

The WTO Ministerial Conference is being held this week, June 13 – 15, in Geneva, Switzerland.

More than two years into the COVID-19 pandemic, inequities in access to diagnostics, personal protective equipment, treatments and vaccines persist, with global mechanisms failing to deliver on their promise for equitable distribution.

Our recent research identifies several drivers for this inequity and opportunities for Australia to become a global leader in the Asia and Pacific region to improve supply and access.

An early driver of inequity in access was vaccine nationalism. Australia bore responsibility for skewing early supply in the Asia and Pacific region by pre-purchasing excessive quantities of COVID-19 vaccines in 2021 – enough to vaccinate the entire population more than five times over. This strategy by high-income countries meant that by the end of 2021, more boosters had been administered in high-income countries than total doses in low-income countries.

But Australia now has a responsibility to reject proposals by high-income countries that would continue inequities in access to COVID-19 vaccines and products.

Global supply of COVID-19 vaccines increased over the past twelve months, with 17.5 billion doses secured globally, but a crucial barrier remaining is the monopolisation of production.

A very small handful of corporations have been granted exclusive rights to production via rules enshrined in international intellectual property law and they have failed to share these rights with global mechanisms designed to accelerate equitable access to COVID-19 vaccines. As a result, only 16 percent of people in low-income countries have received a single vaccine dose as of 20 May this year, compared to 80 percent in high-income countries, according to World Health Organization (WHO) figures. This is almost eighteen months after the first COVID-19 vaccine was administered.

Battle at the WTO

Recognising these barriers to boosting vaccine supply, India and South Africa shared a proposal with the WTO in October 2020 to waive a range of intellectual property measures on health technologies related to COVID-19.

Supported by more than 100 countries, the proposal offered greater flexibility for countries in choosing to deny the granting of patents or other intellectual property on COVID-19 vaccines, diagnostics, treatments and other technologies such as personal protective equipment in order to boost supply and access.

Negotiations over the waiver proposal have been slow, in part due to opposition by a group of high-income countries led by the United Kingdom, United States, Singapore and the European Union. These countries have been reluctant to support a measure that would reduce the profits of the transnational pharmaceutical firms whose headquarters they host and who hold these exclusive rights.

Ongoing pressure by low and middle-income countries, supported by civil society and international organisations, has kept the proposal on the agenda. After several months of deadlock, in early May 2022 a draft ‘compromise’ proposal was tabled by the WTO Director General Okonjo-Iweala reflecting informal discussions between the European Union, India, South Africa and the United States.

Okonjo-Iweala, who has called the ongoing COVID-19 vaccine inequity “unconscionable”, has called on WTO member states to strike a deal by the end of this month.

Negotiations have unfolded behind closed doors, but the online leak of a follow on draft negotiation document, dated 25 May 2022, demonstrated a deep divide and lack of consensus over the terms of a waiver.

The 25 May draft, which contained several provisions under negotiation and not yet agreed to, included concerning textual amendments stricter than current international IP law, including:

Negotiations have intensified in the lead up to the WTO’s 12th Ministerial Conference in Geneva this week. On June 10, a draft Ministerial Decision was circulated by the Chair of the WTO Trade-Related Aspects of Intellectual Property Rights (TRIPS) council for member-state consideration.

The draft Decision retains much of the problematic language of the 25 May text and stands as a shadow of the original proposal, presenting a restrictive and unworkable proposal, including:

It is also unclear whether the final decision by Ministers will include a commitment to decide whether to extend the waiver to cover tests and treatments at a later date.

Australia should reject an unworkable waiver

Inequities in access to COVID-19 products include not only vaccines but also treatments, diagnostics, tests and equipment. Monopolies that serve as barriers to local production include patents, trade secrets, data production and manufacturing know how.

Developing countries need to be able to manufacture, import and export vaccines to all countries regardless of their membership of the WTO and Australia must oppose any obligations that go beyond existing international law in creating further barriers and obstacles.

There is strong public support in Australia for substantive changes to international intellectual property law to improve access to COVID vaccines and related products.

In 2021, more than 50,000 Australians signed a petition calling on the Australian government to support South Africa and India’s proposal. An Essential Media poll in July 2021 showed that sixty-two percent of Australians believe the Government should support this broader waiver, and more than 150 scholars and lawyers have signed a public letter saying the same.

Australia’s newly elected ALP Government ran on an election platform that included commitments to expand Australia’s vaccine and domestic pharmaceutical industry supply to keep Australia healthy. In order to achieve this, the Government must support increased regional production and supply to ensure healthy neighbours and resist unworkable and restrictive proposals.

The Australian Government should support low- and middle-income country calls for mechanisms that do away with monopoly barriers to the local production, import and export of COVID-19 vaccines and products.

A substantive waiver must cover all needed COVID-19 products and all relevant intellectual property for use by all countries that require it. 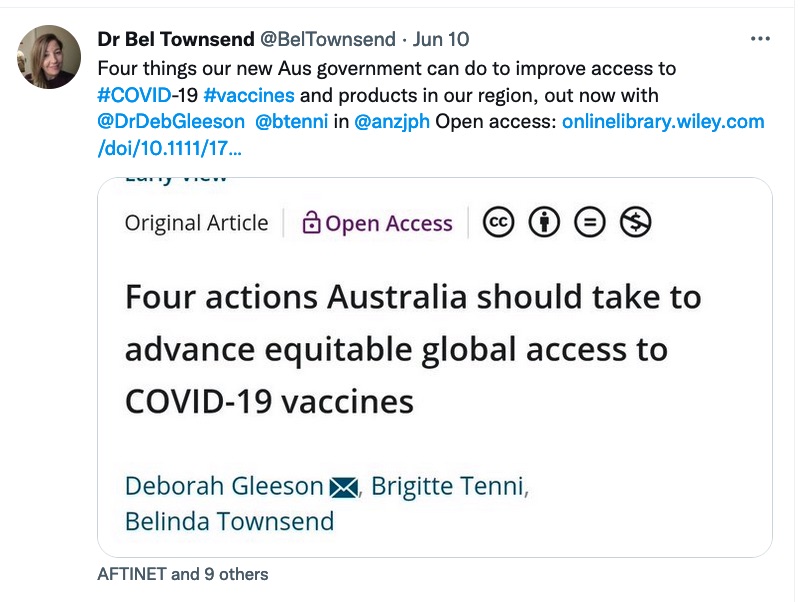 PrevPreviousCalling for protection from a torrent of alcohol-related misinformation
NextICYMI…catch the latest on climate, COVID, public health events and celebrating Indigenous doctorsNext