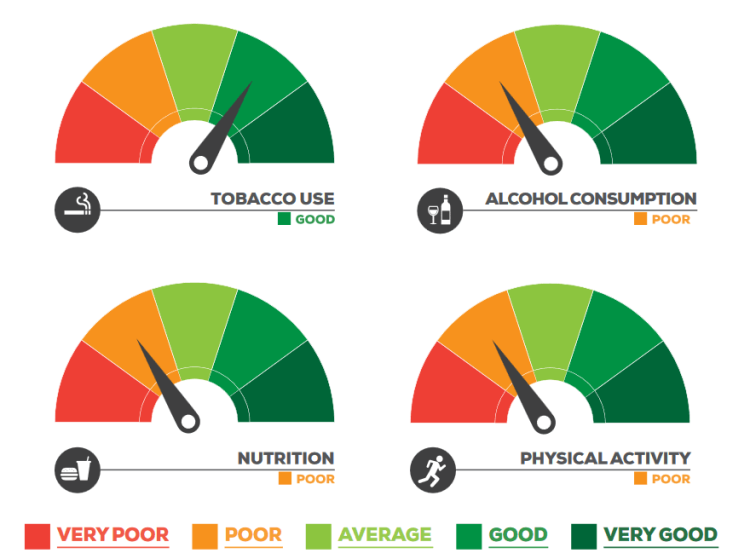 Australia warned on the ‘chronic disease time bomb’ – but what about the underlying causes?

The Prevention 1st campaign this week released a scorecard on the implementation in Australia of World Health Organisation recommended interventions to reduce preventable chronic disease.

The Preventing Chronic Disease: How does Australia Score? report found that while our health measures in tobacco policy are world leading, Australia has fallen well short in its preventive health efforts in the key areas of alcohol consumption, nutrition, and physical activity.

But some lamented the missed opportunity for the scorecard itself to aim higher and deeper, to look at the social causes of unhealthy behaviours, including poverty, racism and environmental factors.

Reviewing the scorecard below, Sharon Friel, Director and Professor of Health Equity at Australian National University, welcomed the calls to action and accountability but said a prevention focus on behaviours like smoking and drinking runs the risk of slipping towards a focus on the individual.

She said it would be great to see prevention policy be even bolder, really tackling the underlying political, commercial and social causes of these behaviours:

“Action is needed in areas of education, employment, urban development, trade, and social protection, each of which will contribute significantly to preventing obesity, alcohol and tobacco related ill-health.”

Read her comments in full below, after this overview.

Prevention 1st is a campaign by the Foundation for Alcohol Research and Education (FARE), the Public  Health  Association  of  Australia  (PHAA),  Dementia  Australia,  and  the  Consumers  Health Forum (CHF) of Australia, calling on all Australian governments and political parties to commit to a strong preventive health agenda for chronic disease.

For the scorecard it invited experts in tobacco, alcohol, nutrition and physical activity to rate Commonwealth and state government action against the WHO’s ‘Best Buys’ and Other Recommended Interventions for the Prevention and Control of Noncommunicable Diseases, informed by other public health initiatives like the Dirty Ashtray Award.

It said that chronic disease, which is responsible for 83 per cent of all premature deaths in Australia, accounts for 66 per cent of the burden of disease, and costs our economy an estimated $27 billion annually.

“They are driven  by  poverty,  globalised  marketing  and  trade  of  unhealthy  products,  rapid  urbanisation leading to physical inactivity and an aging population, and they leave no country untouched.”

Prevention 1st said one-third of chronic disease cases are held by the Australian Institute of Health and Welfare to be preventable and can be traced to four modifiable risk factors: tobacco use, alcohol consumption, poor diet, and physical inactivity.

The Prevention 1st Scorecard rates (from 1 for Very Poor to 5 for Very Good) Australia’s performance on 18  policies in theses areas, which it describes as a  mix  of overarching/enabling  actions,  ‘best  buys’,  effective interventions and other recommended interventions. See the graphics below.

Verdicts from the scorecard

ALCOHOL: Action on the WHO recommended alcohol interventions could move to ‘very good’ by abolishing the Wine Equalisation Tax, introducing mandatory pregnancy warning labels, as well as legislating and enforcing alcohol advertising restrictions across all media 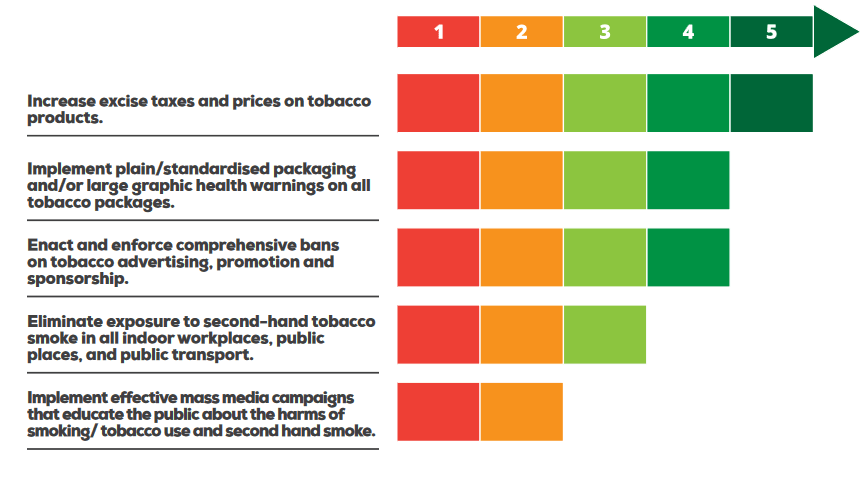 NUTRITION: Action on nutrition interventions could move to ‘very good’ by legislating time-based restrictions on exposure of children to unhealthy food and drink marketing before 9:30pm, enhancing consumer information in the form of mandatory interpretive front-of-pack labelling and introducing a health levy on sugary drinks. 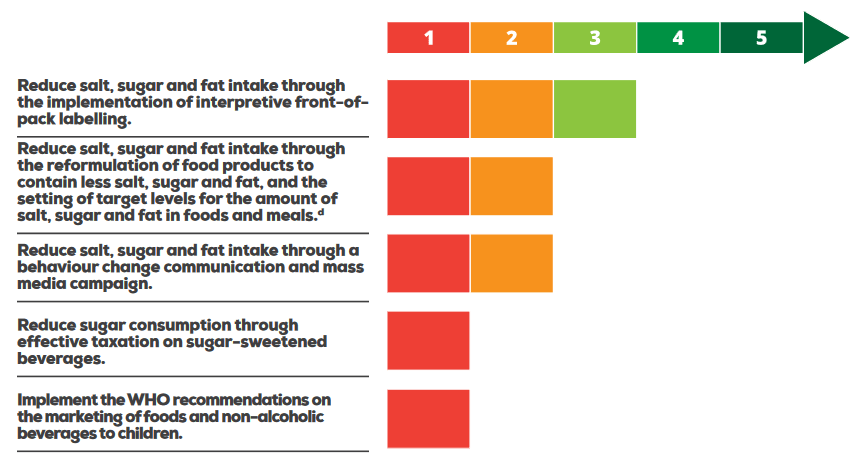 PHYSICAL ACTIVITY: Progress on physical activity could move to ‘very good’ if the national curriculum were to focus on a whole-of-school physical education program and if population-wide mass media campaigns were run following the announcement and funding of the National Sports Plan. 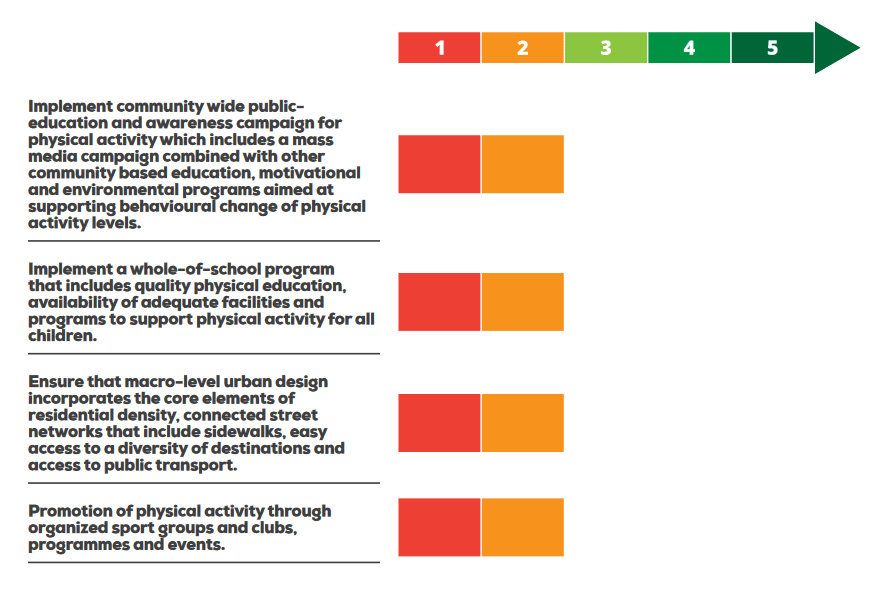 The Preventing Chronic Disease scorecard provides an excellent assessment of how the Australian Government is tracking in terms of action to address four key behavioural risk factors. It shows quite clearly that there is incredible room for improvement.

There is now the opportunity, a need, for the Australian Government to lift its game when it comes to disease prevention and health promotion.

A prevention focus on behaviours runs the risk of slipping towards a focus on the individual.

As the Preventing Chronic Disease scorecard highlights, action is needed at the environmental level not the individual level. It would be great to see prevention policy be even bolder, really tackling the underlying political, commercial and social causes of these behaviours.

Choosing to eat healthy food, being physically active, limiting alcohol consumption and not smoking requires people to be empowered to make these choices. It means that the healthy choice must be physically, financially and socially the easier and more desirable choice relative to the less healthy option. Whether or not this happens is not a thing of chance. Options are socially constructed.

What, and how much, people eat, drink and smoke and how they expend energy are responses to their political, economic, environmental and cultural environments. People with less money, less education, insecure working conditions, poor living conditions are much more likely to higher levels of these health risk behaviours. The social gradient in health-related behaviours tells us that to prevent these harms means we need to pay attention to the social conditions that structure these inequities.

Governments have failed to protect the health of all its citizens. Greater corporate regulation and accountability is needed. Reinstatement of a strong public sector that is the provider of public goods including health is needed and requires policies, legislation and regulations that tackle not only the immediate behavioural environments but also the underlying social causes of unhealthy behaviours.

Action is needed in areas of education, employment, urban development, trade, and social protection, each of which will contribute significantly to preventing obesity, alcohol and tobacco related ill-health. The health sector must play a stewardship role in brokering intersectoral collaboration for health and policy coherence.

Sharon Friel is Director and Professor of Health Equity at the School of Regulation and Global Governance (RegNet), College of Asia and the Pacific, Director, Menzies Centre for Health Policy, at the Australian National University. 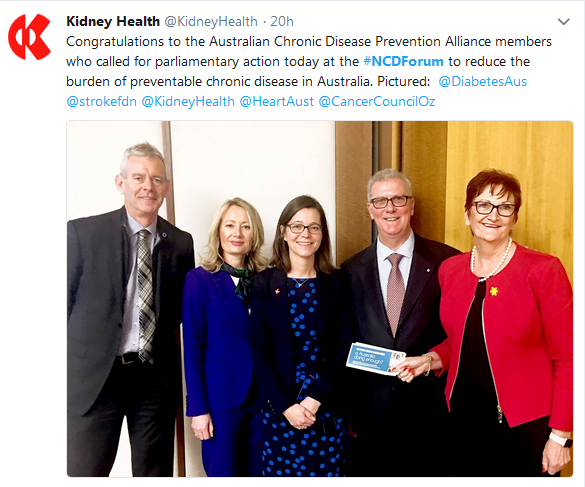 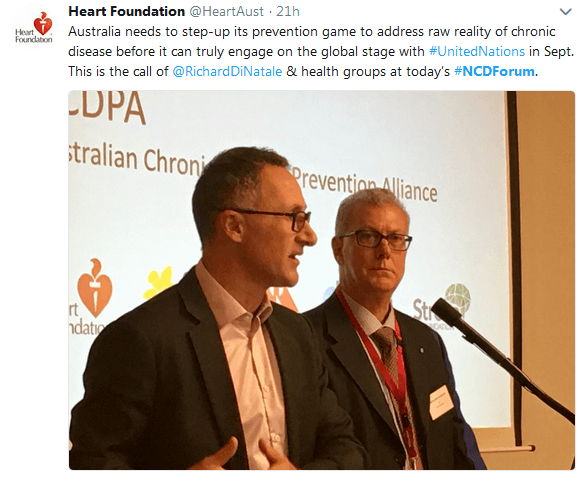 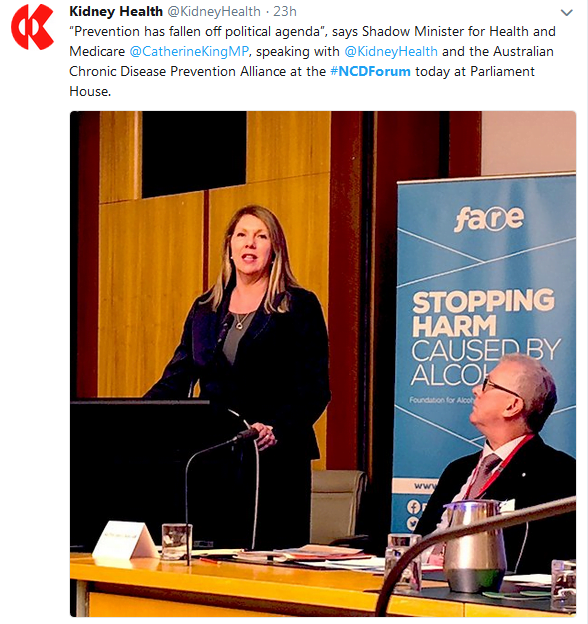 Coca-Cola recruiting lobbyist to fight sugar tax, despite new research revealing such taxes can save lives

A big challenge from two Harvard scholars to the Philip Morris International–Funded Foundation for a Smoke-Free World. They said if it’s serious:

PrevPrevious5 reasons to endorse the Uluru Statement from the Heart, on health grounds alone.
NextReal-time wrap of the #CroakeyREAD conversations and news (part one)Next