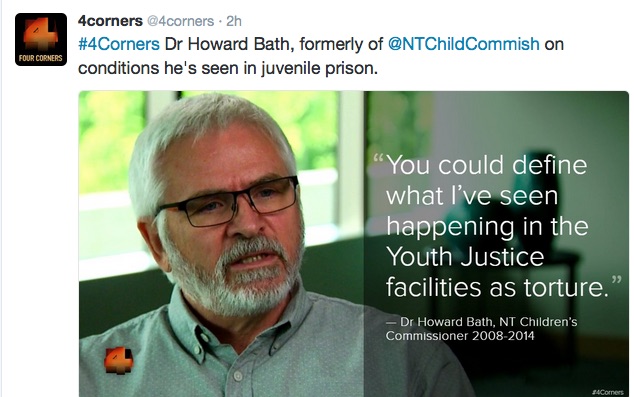 Thousands of people have signed a petition calling for a Royal Commission into the torture and abuse of children in Northern Territory youth detention centres following horrific footage and revelations on ABC TV’s Four Corners program.

And a Turnbull Government Minister, Ken Wyatt, the Assistant Minister for Health, has called for those responsible to be held accountable.

“I am angry, stunned and ashamed that this is happening in our Country and those responsible must be held accountable,” he tweeted.

Human Rights Commissioner GillianTriggs called for an independent inquiry into NT juvenile detention in the wake of the “disgraceful” revelations.

(Correction on earlier figures given here. Amnesty figures show: From July 2013 to June 2014 Indigenous young people made up an average of 96 per cent of all young people in detention in the NT (45 out of 47) while comprising around 44 per cent of the population aged between 10 and 17).

Triggs told Q and A that a proper inquiry is needed to determine the facts and “whether people should be charged”.

The revelations will put the Prime Minister and Indigenous Affairs Minister Nigel Scullion under renewed pressure to introduce justice targets and to tackle the over-incarceration of Aboriginal and Torres Strait Islander people.

The abuses in the NT are not only down to the Territory Government. The Australian Government’s “recalcitrance” in tackling rising rates of incarceration of Aboriginal and Torres Strait Islander people is well documented.

Traumatic footage showed boys being tear-gassed inside their cells, forcibly stripped naked, hooded and strapped to restraining chairs for hours, and isolated in hot, stinking cells for days, without even running water.

Hefty guards were shown holding down the boys, stripping them, assaulting them, and laughing as tear gas was fired into their cells.

A series of legal experts told Four Corners that the treatment amounted to torture, as defined by the United Nations, as well as breaches of the rights of children.

The program also revealed that authorities lied to the public about a so-called riot at the Don Dale detention centre in 2014 (see more details here).

One of the solicitors on the program, Peter O’Brien, has launched an online petition, calling for a  Royal Commission to ensure that the perpetrators and responsible institutions are held to account.

Amnesty International has called for the Australian Government to act, to end systemic abuse of children in youth detention.

An Amnesty statement said the abuses shown by Four Corners are a shocking violation of both the UN Convention on the Rights of the Child and the Convention against Torture.

“The Australian Government must immediately launch an investigation into the NT youth detention system, and take action to prevent the abuse of children in youth detention across Australia,” the statement said.

It said the issue was a wider problem than the NT, and that Amnesty International is aware of serious allegations about the treatment of children in detention in every state and territory over the past five years. 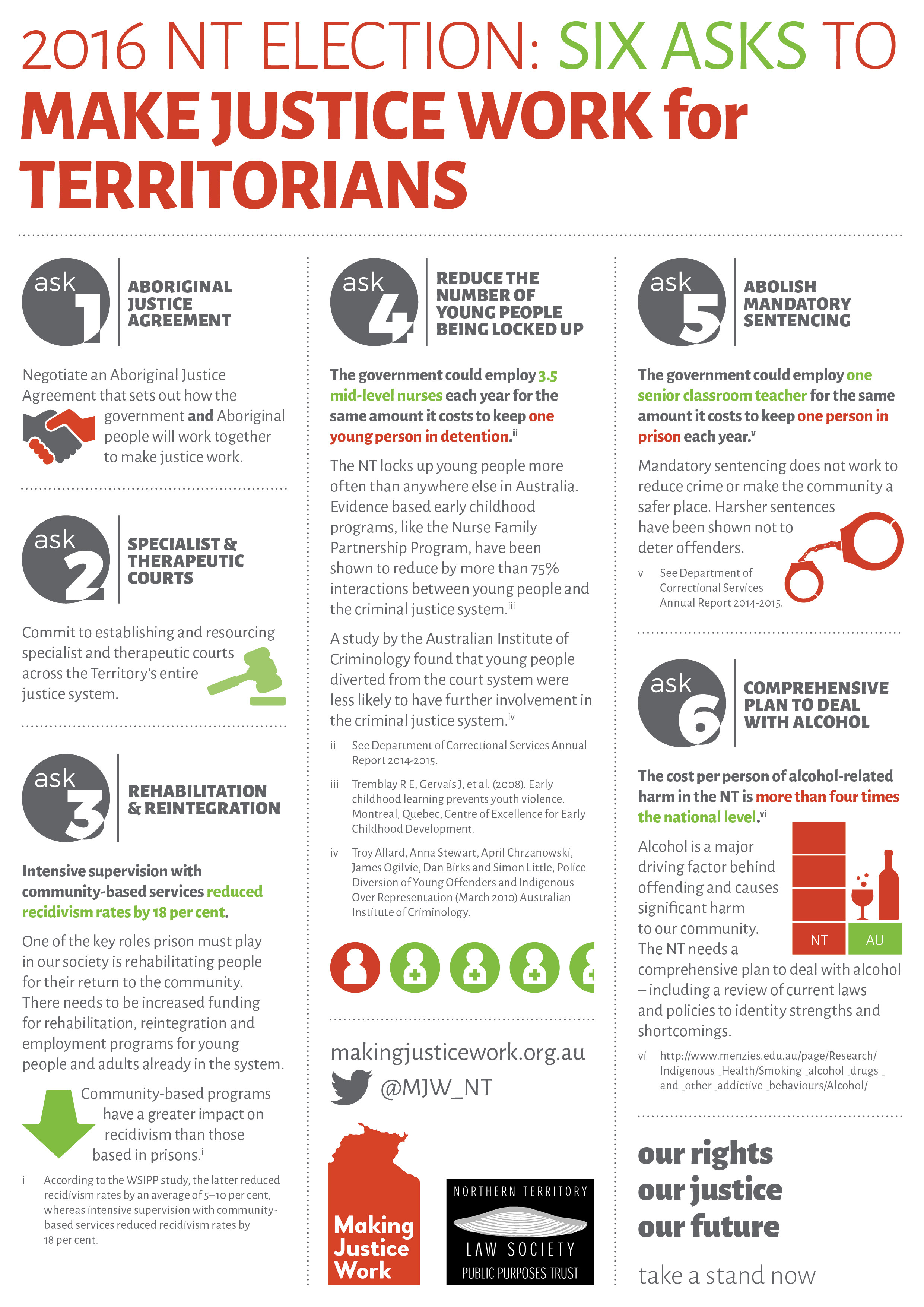 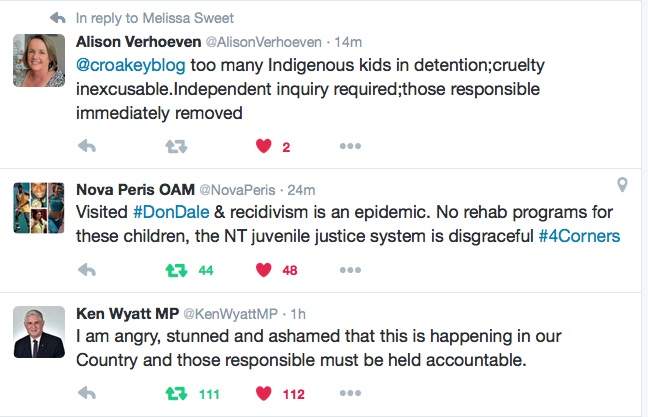 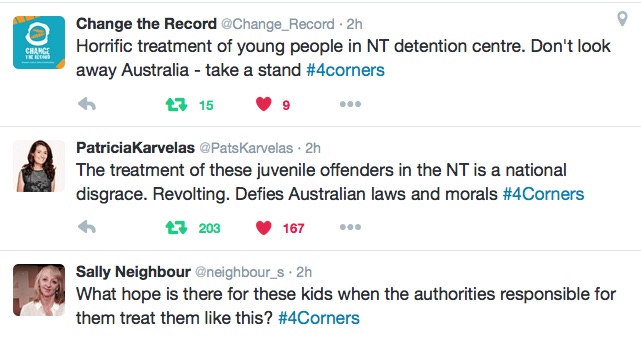 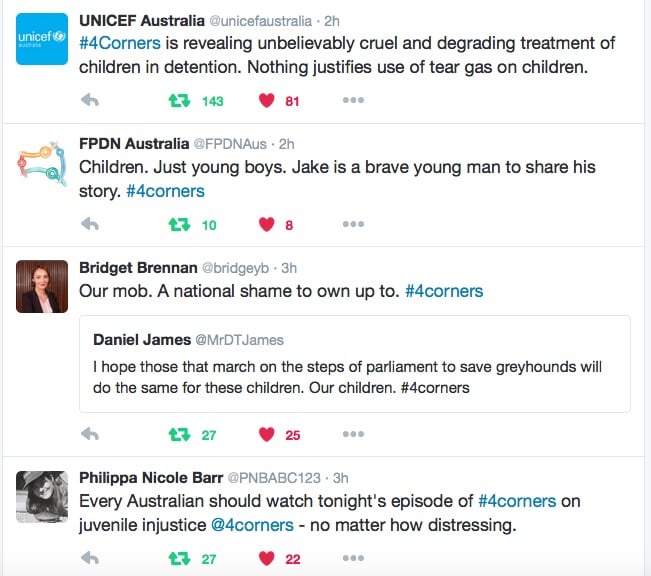 PrevPreviousWearable health technologies: will their benefits (and risks) flow beyond the ‘white, worried and well’?
NextCalls for the Royal Commission into NT juvenile justice to have a wide-ranging remitNext