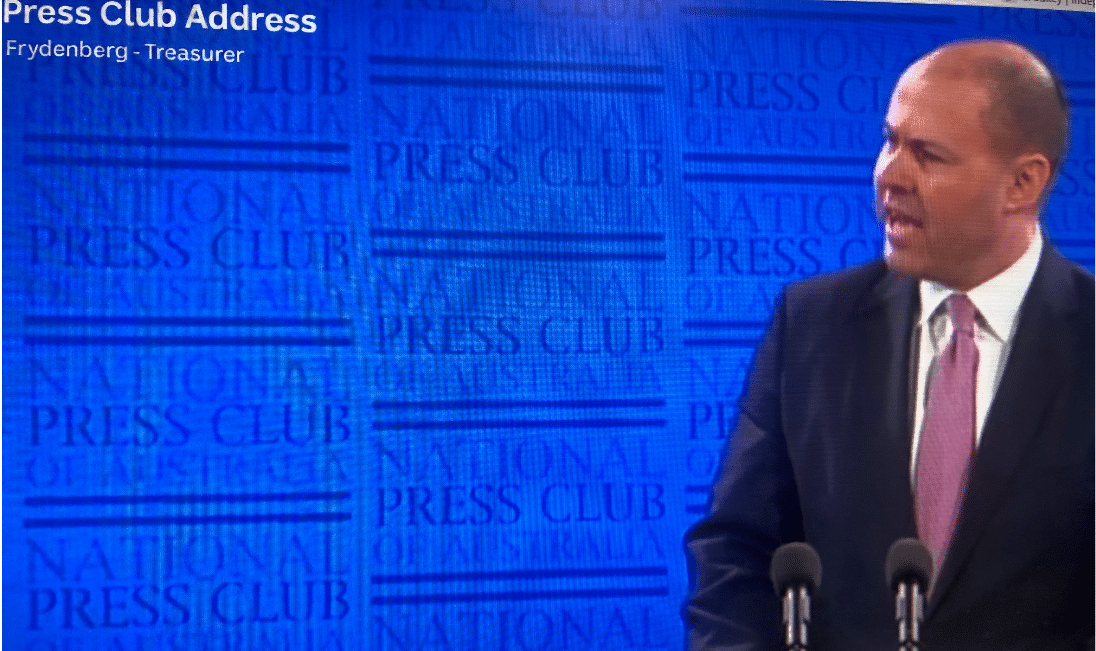 Stiglitz warned that corporate tax cuts do not stimulate investment, and urged the US Government to spend post-pandemic stimulus funding equitably and transparently, given it will have to be so huge, and to use it to reshape the economy, to reflect values “towards a greener economy, a more shared prosperity”.

Today, in another Australia Institute webinar, economist Richard Denniss warned the Government against taking a laissez faire approach to tackling the deepest recession ever experienced in Australia.

He called for concerted efforts to create millions of jobs and to focus on equity (the webinar also featured Nobel laureate Professor Peter Doherty; read a Twitter thread summarising the discussions or watch it here).

The Federal Government, including on Tuesday in an address by Treasurer Josh Frydenberg at the National Press Club, has been warning that lockdowns in Australia are currently causing a reduction in economic activity worth $4 billion per week, prompting concerns in the health and social sectors that it will seek to dramatically cut spending when it can.

Following today’s National Cabinet meeting, the Prime Minister said in a statement that a three-step framework would be established to gradually remove baseline restrictions to enable Australians to live in “a COVID-19 safe economy”, with details to be determined by National Cabinet on Friday 8 May.

Removal of restrictions would “be subject to strong epidemiology results, testing, tracing and local surge health response capacity”, with National Cabinet noting that some health measures – including social distancing, strong hygiene and international travel restrictions – would need to be in place for a long time, and that some jurisdictions may choose to maintain interstate travel restrictions.

Below, a range of Australian academics, researchers, trade union representatives and others, brought together by independent progressive think tank Per Capita, call on the Government to rule out austerity measures in response to the public debt generated during the pandemic.

They warn such an approach would entrench high levels of structural unemployment, destroy many small businesses, suppress growth and plunge millions of Australians into poverty.

The Australian Council of Social Service also said on Tuesday that the country must never go back to the previous low Newstart payments, and must provide safety nets that protect people from poverty – “people must be able to meet the basic needs of housing, food, utilities and medical costs, and families must have enough to care for their children,” it said.

An open letter to our political leaders:

The extraordinary public health measures taken to address the COVID-19 pandemic have resulted in the biggest economic shock Australia has ever experienced. Unemployment is expected to rise to levels not seen for more than a generation, and the government has rightly taken on significant public debt to support jobs and incomes while a large proportion of the nation’s economic activity has been temporarily shut down.

As we emerge from the immediate crisis, attention is beginning to turn to how we will rebuild our economy, restore jobs and livelihoods, and pay down that debt, which has been described as a massive burden on future generations.

It is important to recognise that it is not the debt itself that poses a risk to our future: it is how we choose to respond to it.

What comes next is critical. The decisions taken in the aftermath of this crisis will have a material impact on the opportunities of our children to build good lives, and to enjoy the same, or better, standards of living than did their parents and grandparents.

There is likely to be a fierce battle waged over how we rebuild Australia’s economy. This must, and will, be a contest about what sort of society we want Australia to be.

On one side will be a push to return to the kind of economic arrangements that have exacerbated wealth and income inequality, and contributed to the crisis of climate change.

On the other is an opportunity to reset our economy to be more sustainable and equitable, and to pay down the debt without causing further damage to Australians through austerity measures.

Already, some are calling for cuts to government spending on essential services and income support, others for an increase in the rate of the Goods and Services Tax. Soon, we will likely see a push to sell off public assets.

It is imperative that Government does not choose the path of austerity in response to this crisis. Cutting spending will jeopardise the recovery and lead us down a low demand, high unemployment, low growth route.

Many countries implemented austerity measures following the GFC with the singular goal of paying down debt. The UK government cut over GBP30 billion from social spending over the following decade in the pursuit of a balanced budget.

Austerity economics has led to a decade of poor growth, low wages and rising poverty across the UK, with GDP estimated to have been suppressed by up to GBP100 billion a year as a direct result. In 2018, the United Nations found that austerity measures were “entrenching high levels of poverty and inflicting unnecessary misery in one of the richest countries in the world”.

The key to ensuring our children are not punished for our debt is to take the necessary measures to protect and build the economy in which they will live and work. They will need good, reliable jobs with decent incomes; a strong social safety net; access to affordable housing; and the opportunities provided by a world-class education.

None of these things are possible if we respond to public debt by cutting spending.

When economic activity is restored, well over a million people will be out of work. Many of those still with a job are likely to see their incomes reduced for months and even years. With high levels of household debt, consumer demand will be depressed and, despite record-low interest rates, business will be reluctant to borrow.

We will need more spending, not less. Recent government spending has been called a stimulus, but it is more accurately described as welfare spending for the economy. The stimulus we need is still to come.

The good news is that it has never been cheaper for the government to borrow money to invest in the productive capacity of the economy, and to create new jobs. The yield on 10 year government bonds is currently less than 1%, while inflation is around 1.7%. This means that borrowing is essentially interest free for the government.

We the undersigned call on the Government and Opposition to work together to invest in the productive capacity of the Australian economy, by rebuilding public services and public infrastructure, and creating strong incentives for business to invest in productivity growth; and to rule out austerity measures such as spending cuts that would entrench high levels of structural unemployment, destroy many small businesses, suppress growth and plunge millions of Australians into poverty.

Tim Lyons, Research Fellow, Per Capita and Former Assistant Secretary of the ACTU