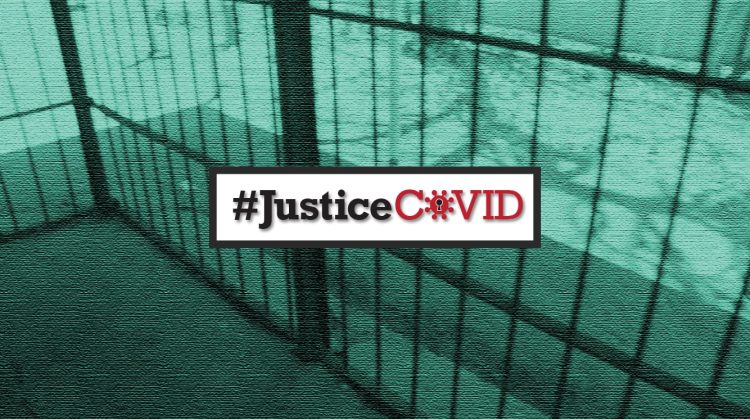 Australian governments are facing renewed calls to dramatically cut the number of people held in prisons and other places of detention that are “potential disaster zones” in the coronavirus pandemic, particularly for Aboriginal and Torres Strait Islander people and others at risk.

“We are not out of the woods yet,” said a joint submission to the Senate Select Committee on COVID-19 released on Thursday by a broad alliance of civil society and Aboriginal and Torres Strait Islander organisations, and senior academics.

“Evidence from around the world is clear – once COVID-19 enters a place of detention, it will spread  like wildfire,” the submission says.

It refers to devastating outbreaks in prisons elsewhere in the world and high risk clusters in Australia, including in an inpatient psychiatric facility in Melbourne and the Newmarch House aged care facility.

The submission also calls for an end to solitary isolation in prisons and the implementation in Australia of the Optional Protocol to the Convention against Torture and Other Cruel, Inhuman or Degrading Treatment or Punishment (OPCAT) which aims to prevent mistreatment in places of detention by establishing systems for independent monitoring and inspection.

Members of the OPCAT Network, which promotes the implementation of the Treaty in Australia, led development of the submission, which says greater oversight is particularly needed now that visits to prisons and youth detention have been suspended.

Advocates are concerned that it is not only family, lawyers and support services who have had to stop visiting prisons and other facilities, but also official oversight bodies such as state ombudsman offices.

“Abuse thrives behind closed doors, and COVID-19 cannot be an excuse to resort to fundamentally harmful practices in all places of detention,” said one of the authors, Monique Hurley, Senior Lawyer at the Human Rights Law Centre.

While coronavirus outbreaks have devastated many prisons globally, especially in the United States and Spain, Australian prisons so far have been relatively untouched so far, with just a handful of positive COVID19 infections reported amongst staff members in Queensland and New South Wales, and inconclusive testing of three prisoners in regional Victoria.

But the OPCAT network report warns that governments should not “wait for people to get sick and die” and should use the pandemic to rethink detention and sentencing policies generally.

“Around the world, governments are releasing imprisoned people to stop the deadly spread of COVID-19,” said Nerita Waight, Co-Chair of the National Aboriginal and Torres Strait Islander Legal Services (NATSILS), a signatory to the submission.

“We are calling for the immediate release of First Nations people. Priority needs to be given to those most at risk like our elderly, sick, people with disability and those with mental health issues. This is necessary to contain the spread of coronavirus so we are all healthy and safe.” 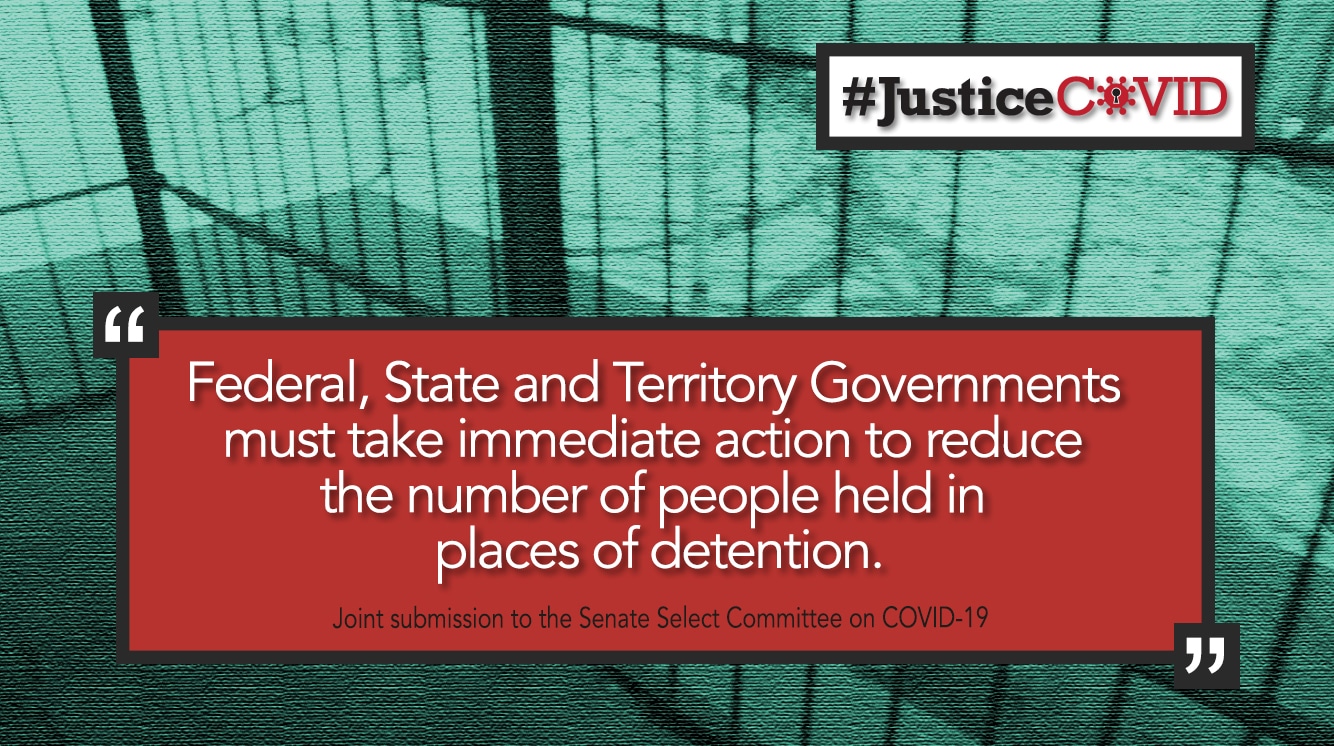 Change the Record, an Aboriginal led coalition of legal, justice and health groups, is also a signatory to the submission and on Wednesday released a separate report, Critical Condition – the impact of Covid-19 policies, policing and prisons on First Nations communities.

This report is calling for the urgent release of Aboriginal and Torres Strait Islander people, who “due to the ongoing impacts of colonisation, poverty and inequality”, experience poorer health than non-Indigenous Australians and are held in disproportionate numbers in prisons and youth detention.

But the report says that not only are Aboriginal and Torres Strait Islander people at high risk of the worst impacts of the coronavirus, including in prisons and youth detention, they are also “disproportionately affected by some of the more punitive and restrictive COVID-19 responses” being rolled out.

Among many issues of concern across the country are:

In a Twitter thread, Change the Record Executive Office Sophie Trevitt said the investigation “heard reports of mob living in overcrowded conditions, and folks who are homeless, being issued with fines despite having nowhere else to go and no ability to pay the fines”.

“This entrenches poverty and inequality and does nothing to keep people safe from COVID-19,” she said.

The alliance also heard stories of mothers being denied visits with their young children and the fear that this will impact on their future ability to be reunified as a family, she said, noting that this week also marked Sorry Day, national recognition of the impact on the Stolen Generations.

The Change the Record report gives multiple examples of “discriminatory policing” of Aboriginal and Torres Strait Islander people, including where disproportionately high numbers of social distancing fines have been handed out in towns with high Indigenous populations and low levels of COVID-19.

It says Aboriginal and Torres Strait Islander people in the Northern Territory town of Tennant Creek had complained to Amnesty International that police have attended houses known to them as overcrowded and used COVID-19 regulations to order people to disperse.

“When household members failed to disperse, because they had nowhere else to go, they were issued fines,” it said, adding that Tennant Creek alone accounted for nearly one-third of the total 48 ‘social distancing’ fines levied by NT police as at mid-May.

Change the Record says it has struggled to get up to date information about the conditions in adult and youth correction facilities due to restrictions on legal and family visits and the withdrawal of independent oversight bodies and external scrutiny in many states and territories.

That’s also a big concern in the OPCAT Network submission, which is urging governments to act on the vision of OPCAT, ratified by Australia in 2017 but yet to appoint independent inspectors in all jurisdictions, to ensure that there is greater oversight and transparency in all places of detention.

Under OPCAT, “National Prevention Mechanisms” are due to be set up in all jurisdictions to conduct inspections of all places of detention, particularly prisons, youth detention, and immigration detention centres. Their scrutiny would also apply to police cells, closed facilities for mental health treatment, secure residential care facilities, aged care facilities and quarantine.

The submissions also addresses the difficulty for advocates and media outlets like Croakey in tracking down what individual jurisdictions and detention facilities are doing to prevent and/or manage a coronavirus outbreak, including information about testing.

The OPCAT network urges governments to provide regular, updated and accurate information to the public and to oversight bodies on their responses to the COVID-19 pandemic in relation to each place of detention, including:

Echoing calls from Change the Record and many other legal and health bodies, the submission urges governments to follow the lead of many other countries and “responsibly release” people who are at higher risk of significant harm should they contract COVID-19.

“People detained behind bars are a cohort particularly vulnerable to the impacts of COVID-19. For example, almost one-third of people entering prison in Australia have a chronic medical condition like asthma, cancer, cardiovascular disease, diabetes or live with disability,” the submission says.

It also calls on governments to curb admissions to prisons by looking at non-custodial sentencing alternatives, encouraging police to rely on summons and bail rather than arrest, to decriminalise   COVID-19-related offences such as breach of quarantine or social distancing regulations and, like Amnesty International Australia and others have urged, to raise the age of criminal responsibility from 10 in some jurisdictions to 14.

According to Amnesty, this particularly affects Aboriginal and Torres Strait Islander children. Its report, also released on Wednesday, says that between 2018 and 2019, Australian governments pushed almost 8,353 children aged 10, 11, 12 and 13 years through the criminal justice system, with 573 children under the age of 14 held in detention, ” despite overwhelming evidence of the harm prison does to children”.

“COVID-19 presents acute health risks to people in places of detention,” said Professor Thalia Anthony, of the University of Technology in Sydney.

“However, rather than ensuring protection and safety through removing people from these places, governments across Australia have made these closed environments unprecedentedly restrictive and harmful to the wellbeing of people inside.”