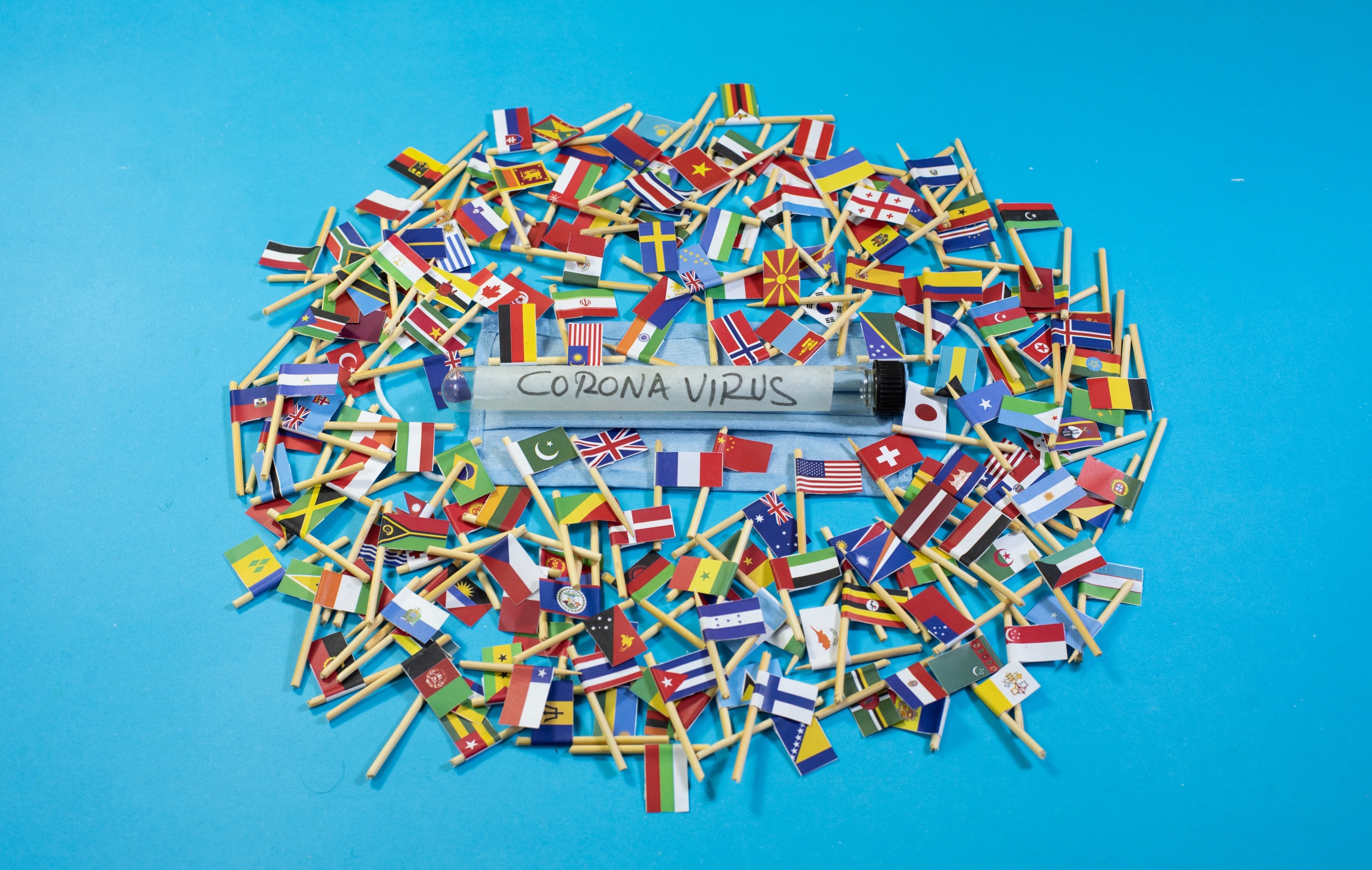 Introduction by Croakey: Associate Professor Deborah Gleeson from La Trobe University has called on Australian governments to do much more to reduce the “catastrophic global inequities” in access to COVID-19 vaccines.

At the recent Population Health Congress, she said advocacy by public health, community and humanitarian organisations had seen a shift in the former Morrison Government’s position on key issues relating to the issue.

But she told the Congress more needs to be done, outlining four actions governments could take to help support equitable access to the vaccines, including boosting pharmaceutical production in low-income countries.

The theme for the conference which took place from 21-23 September, on Kaurna Country in Adelaide, was ‘Towards a just, safe and sustainable future for Australasia’.

Gleeson’s presentation has been adapted for publication below.

Wealthy countries, including Australia, are responsible for catastrophic global inequities in access to COVID-19 vaccines during the pandemic, that have still not yet resolved. Over the last two years, the Public Health Association of Australia has been engaged in a collaborative advocacy effort with other non-government organisations to hold the Australian Government to account support.

While the Morrison government’s position shifted on a key issue in September 2021, there is much more Australia can do to help correct the persistent inequities.

In January last year, the Director-General of the World Health Organization Dr Tedros Ghebreyesus spoke about the distribution of COVID-19 vaccines. He warned:

…the world is on the brink of a catastrophic moral failure – and the price of this failure will be paid with lives and livelihoods in the world’s poorest countries.”

At that stage, more than 39 million doses of COVID-19 vaccine had been administered in at least 49 higher-income countries. Just 25 doses had been given in one lowest-income country.

Now, well over two and a half years into the pandemic, 12.7 billion doses of COVID-19 vaccines have been administered around the world. But only around one in five people in low-income countries have received a dose.

Less than 19 percent of the population in low-income countries has completed an initial vaccination protocol. You can see from the map above that Africa is being left behind. And the situation in some countries is very dire – in Nigeria, less than 15 percent have completed their initial vaccination protocol. In Papua New Guinea only 2.9 percent have and in Haiti 1.9 percent.

Unfortunately, the WHO Director-General’s prediction has come to pass, and the lag in vaccination rates in low income countries has cost hundreds of thousands of lives.

COVID-19 Vaccines Global Access (COVAX) was set up in 2020 as a global mechanism for equitably sharing COVID vaccine doses. COVAX is led by the Coalition for Epidemic Preparedness Innovations; Gavi, the Vaccine Alliance; and the World Health Organization.

Ninety-two countries relied on it as their main, or only, strategy for accessing vaccines.

COVAX relied heavily on donations of funds and doses from rich countries, many of which never materialised, or were too ill-timed or too close to expiry to be able to be absorbed by recipient countries.

Rich countries also undermined COVAX by negotiating directly with pharmaceutical companies to pre-purchase large quantities of vaccines, essentially starving COVAX of supplies. By November 2020, more than half of the first 7.5 billion doses had been pre-purchased by high-income countries representing just 14 percent of the world’s population.

You might think that these inequities would have resolved as production of vaccine doses increased. But as high-income countries proceeded to third and fourth doses, the gap widened further.

So, where was Australia in all of this? Despite Australia’s slow domestic COVID vaccine rollout, by August 2021 the Morrison government had entered agreements worth $8 billion dollars to secure more than 280 million doses. That’s more than ten doses per person.

Australia has promised 60 million doses to countries in the Asia Pacific, along with other forms of support, and has so far delivered 47.6 million of these. It has also promised $215 million dollars and ten million vaccine doses to COVAX for low-income countries.

Wealthy countries have not only monopolised limited supplies of vaccines; they have also permitted the pharmaceutical companies they house to maintain monopolies on the means of production.

A handful of companies control the production of the COVID-19 vaccines. Most of these companies have refused to share their intellectual property and technology, and wealthy countries have refused to force them to do so, despite the large amounts of public money that were poured into their development. Moderna, for example, received more than $900 million in public funding.

The intellectual property rights that underpin these monopolies are enshrined in the World Trade Organization’s (WTO) Agreement on Trade Related Aspects of Intellectual Property Rights, or TRIPS.

Under TRIPS, members of the WTO must allow patents of at least 20 years for new pharmaceutical products, along with other types of intellectual property protection. This creates an obvious barrier to rapidly scaling up production of vaccines in a pandemic.

It only applies to patents, not the other types of knowledge and data needed to manufacture vaccines. Countries also tend to face diplomatic and trade pressure not to use these flexibilities.

To solve the barrier that TRIPS presents for access to COVID-19 products, India and South Africa put a proposal to the WTO in October 2020 to relax intellectual property rules for COVID-19 medical products during the pandemic. The proposed TRIPS waiver would have enabled companies around the world to freely produce COVID-19 products and technologies without fear of litigation over possible infringements of intellectual property rights.

This proposal eventually gained the support of more than 100 of the WTO’s 164 member countries, but faced strong opposition from wealthy countries, including the EU, the UK, Switzerland, Canada, Japan and Australia.

There was a turning point in the negotiations in May 2021 when the US announced that it would support a waiver for COVID-19 vaccines. But at that stage, Australia’s position was still unclear.

The Public Health Association of Australia joined with a group of community and humanitarian organisations, including Médecins Sans Frontières (Doctors Without Borders), the Australian Fair Trade and Investment Network (AFTINET), Oxfam, ActionAid Australia and Amnesty International in a concerted advocacy effort to shift the Australian government’s position on the TRIPS waiver.

We organised an open letter from health experts to the former Prime Minister Scott Morrison, asking him to take a leadership role by supporting the TRIPS waiver. This was signed by 207 doctors, 177 academics and 111 public health professionals.

Over the 20 months of negotiations on the TRIPS waiver, the informal advocacy coalition also organised many media releases and interviews, several letters to trade and health ministers, opinion pieces in The Conversation, the Guardian and other news outlets, a number of seminars and events, and other campaign activities including social media campaigns organised by the larger organisations in the network.

We also met with the former trade minister, Dan Tehan and former shadow trade minister Madeleine King, to urge them to support a comprehensive and meaningful TRIPS waiver.

In September 2021, Tehan expressed support for the TRIPS Waiver at a meeting with AFTINET, PHAA and several other community organisations. He confirmed Australia’s changed stance in comments to The Guardian the following day.

It was clear that this was a major shift in position, and likely to be due to the sustained advocacy effort, together with the game-changing shift in the US position.

As often happens, the final agreement that was struck at the WTO, in June 2022, was significantly watered down in comparison with the original proposal put forward by India and South Africa. It was limited to vaccines, only applied to patents, and had a lot of other limitations.

While Labor expressed support for a comprehensive TRIPS waiver while in opposition, the incoming Albanese government supported the watered down version of the waiver once in office.

Inequitable access to medicines and vaccines remains a huge issue, and there’s a lot more Australia can do.

In a recent article in the Australian and New Zealand Journal of Public Health, my co-authors and I argued that there are four actions Australia should take to advance equitable global access to COVID-19 vaccines.

First, we can provide more COVID-19 vaccines for low-income countries. Doses that are not needed in Australia should be relinquished and channelled through COVAX to ensure they get where they are most needed in a timely way.

Second, Australia should support global initiatives to relax intellectual property rights, enabling low- and middle-income countries to manufacture products for COVID-19 and other public health emergencies. This includes expanding the TRIPS Waiver for vaccines to include treatments and tests, an issue on which the Albanese government’s position is not yet clear, and negotiating rules for the World Health Organization’s pandemic treaty that include effective mechanisms to ensure equitable access to health technologies for future pandemics.

Third, we can provide funds and practical help to increase pharmaceutical production capacity in low-income countries in our region.

Finally, the Australian Government can place conditions on public funding invested in research and development to ensure that companies that receive it share their knowledge and technology with producers in developing countries.

The problem of inequitable access to health products and technologies needed for pandemics has not been solved. There is much work still to do. But the shift in the Morrison government’s position on a key issue shows that public health advocacy in this important area can make a difference. 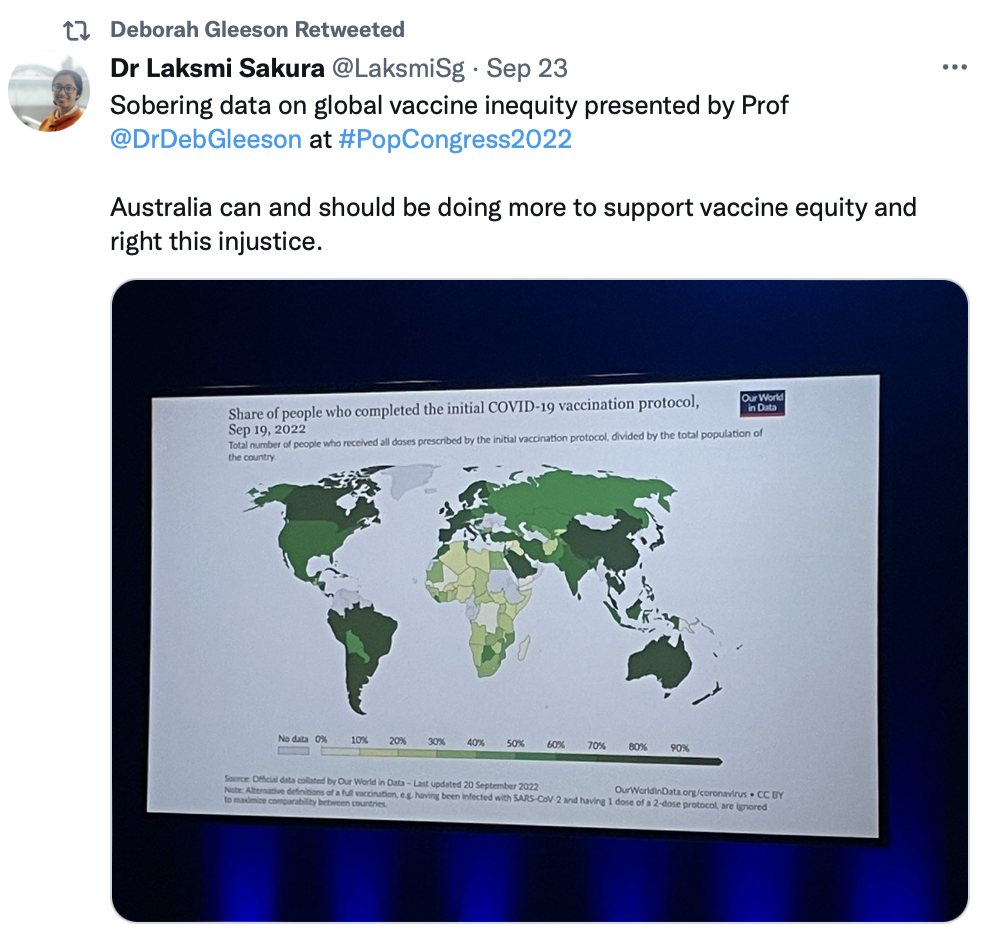 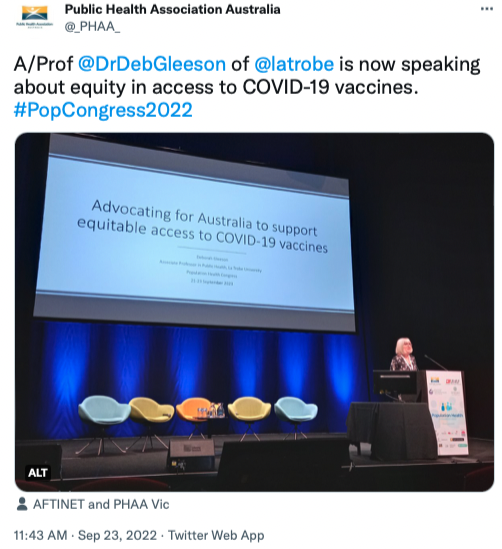 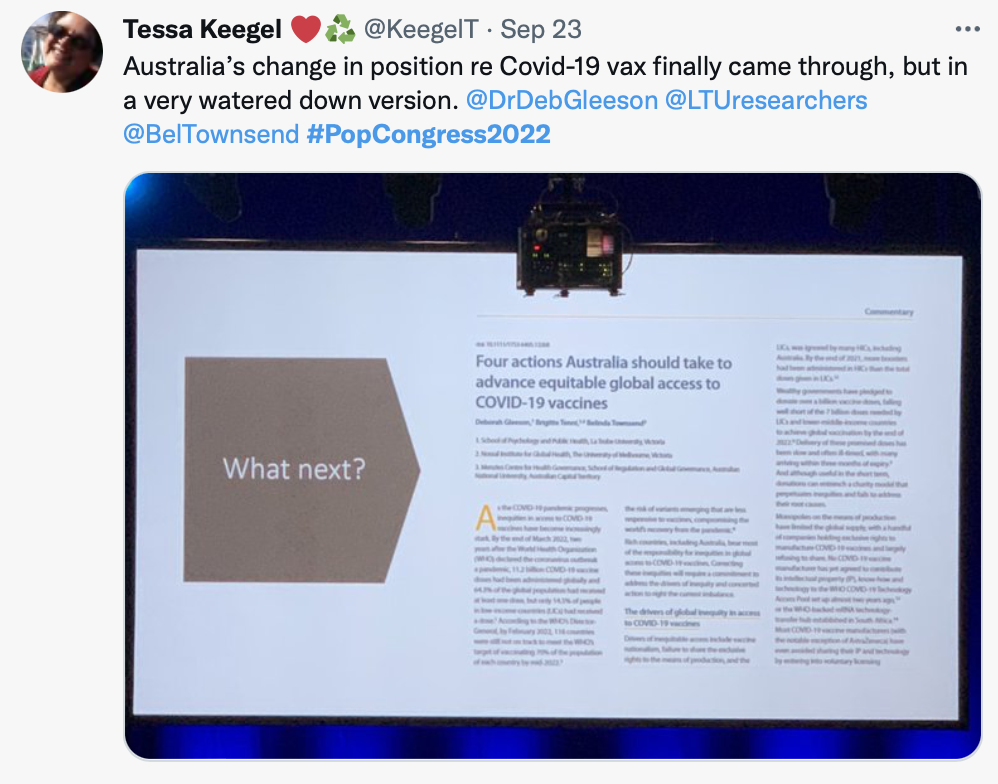