The Australian Red Cross has joined calls for a shift to justice reinvestment, issuing a major report urging that it be made a national priority and that trials be rolled out nationwide.

The Red Cross Vulnerability Report: Rethinking Justice warned that, with Australia’s prison population reaching a 10-year high and Indigenous people comprising more than a third of those incarcerated, a rethink was needed.

Instead of seeing prison as the common resort to crime, the report called for it to be seen as a last resort, and urged governments to pursue justice reinvestment reforms:

Evidence suggests that it is more efficient and effective to address the causes and thus reduce the need for (and greater cost of) incarceration.

Early indications from trials in Australia suggest that adopting a local justice reinvestment approach will pay bigger long-term dividends than a “tough on crime” approach.

There are already successes with #justicereinvestment around Australia – CEO Judy Slatyer on @breakfastnews https://t.co/BPjJb33Fpl

Halting or reducing the prison population would realise savings of between $1.1 billion and $2.3 billion over five years, the Red Cross said.

The pilot program at Cowra (which you can read about in depth here) was one of four trials underway in Australia that were mentioned in the report.

Prisoners were much more likely to come from disadvantaged or Aboriginal and Torres Strait Islander communities.

In support of its claim that incarceration was ineffective at rehabilitating people or deterring crime, the Red Cross noted: 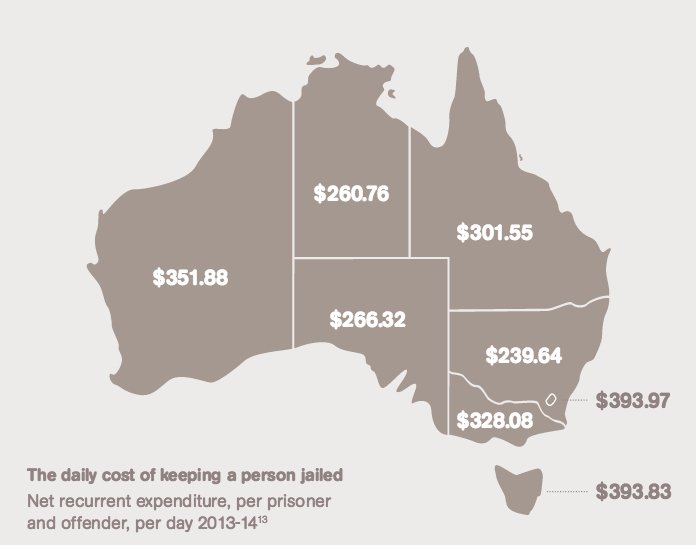 Implementation of the reforms — which the report acknowledged remained controversial for a number of reasons — would require bipartisanship, strong leadership, early identification of important stakeholders, substantial buy-in from all sectors, effective community engagement and ongoing commitment to implementation, the Red Cross said.

We’d encourage you to read the full report, and join the conversation online at #JustJustice or #justicereinvest.