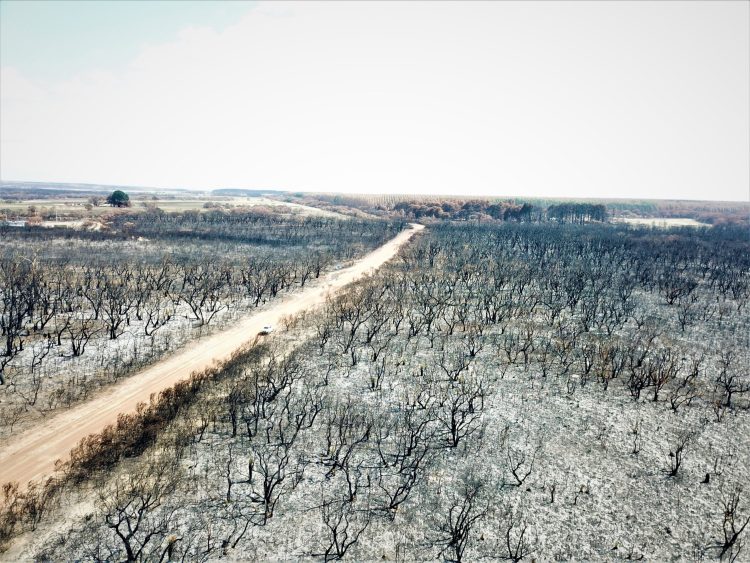 The Australian Academy of Science today published a new climate change report that looks at consequences of 3°C of global warming for Australia – a devastating scenario published as communities across New South Wales and Queensland are mopping up the damage of “one in a hundred year” floods that are projected to happen every year by 2100.

Regular 50C days in Sydney and Melbourne; once in a century floods ever year; mass deaths of livestock; tropical diseases invading our major cities and a quarter of a million homes underwater.

ANU Professors Frank Jotzo and Mark Howden were among the expert panel of scientists, including former Chief Scientist Ian Chubb, who compiled the report – The risks to Australia of a 3°C warmer world. They write below about the catastrophic risks, the challenges, but also the possibilities and solutions in our hands.

Urging Australia to take accelerated action and become a global voice for action, the report warns that even if nations meet their current Paris pledges on time, Earth is likely to reach average global surface temperatures of 3oC above the pre-industrial period during this century, “with catastrophic consequences”.

Other members of the expert panel, its chair Queensland University Professor Ove Hoegh-Guldberg and Macquarie University Professor Lesley Hughes, have published a #LongRead on the report at The Conversation: Seriously ugly: here’s how Australia will look if the world heats by 3°C this century.

The release of the report coincides with new research that studied Australian voters’ attitudes across the political spectrum in the context of the 2019 federal election. It found that about half (52 percent) said climate change was important when deciding their vote but, crucially, that climate was the most important issue for only 14 percent of voters.

Other researchers have this week reported on their work examining whether bushfires are becoming more “severe” (an indicator of how intensely the vegetation burned) as a result of climate change. They said their findings were unexpected, learning that the proportion of high-severity fires generally hasn’t increased in recent decades.

However, they said, the sheer breadth of the 2019-20 bushfires meant an unprecedented 1.8 million hectares across southeast Australia were exposed to high-severity fires, accounting for 44 per cent of the total area burned by high-severity fire since 1988 in that one summer alone.

In his book ‘A Life on our Planet’ David Attenborough examines how humankind has been able to develop and progress only because our natural world has remained relatively stable. Indeed, the conditions on Earth over the past 10,000 years has seen humans thrive.

But the stability of our natural world is under threat. Changes to our planet are accelerating. And fast.

The recent rain event over much of New South Wales and south-east Queensland and the resulting devastating floods, contrasting with the devastating fires last year, are stark reminders of the consequences of a warming planet.

Rainfall extremes are becoming more frequent and intense as global average temperatures increase. What we are experiencing now is with average global surface temperatures sitting at only 1.1°C above the pre-industrial period.

For many locations, including in Australia, historical 1-in-100-year coastal flooding events are beginning to occur more frequently and are likely to occur annually by 2100 under most scenarios.

This future climate change scenario is just one of several contained in a report published today by the Australian Academy of Science – ‘The risks to Australia of a 3°C warmer world.’

We were part of the expert panel of scientists that compiled the report, which is based on peer-reviewed scientific literature.

We set out to understand the comparative risks and costs for Australia if the world remains on its current greenhouse gas emissions trajectory.

The report looks at consequences of 3°C of global warming for ecosystems, food production, cities and towns, and health and wellbeing.

Those consequences are sobering. Annual coastal flooding events. So-called ‘heat stress days’ almost every day across the Top End of Australia. Tropical diseases spreading across the nation. Reduced and more variable crop yields. Ecological systems unrecognisable from those occurring today. And many properties and businesses becoming uninsurable because of extreme weather events.

Adapting to these impacts will increasingly be a mainstream activity across Australia. Fortunately, Australia has substantial capacity in industry, government, universities, and the broader community to reduce the worst impacts and to take advantage of any opportunities as they arise.

The scope for using this capacity to work with our neighbours in the Asia-Pacific region to help them adapt to climate changes and sea level rise is almost unlimited.

Also on the bright side, the report shows that Australia can transition to net zero greenhouse gas (GHG) emissions over the next 10 to 20 years. By doing so, Australia can play our part in avoiding the worst impacts of climate change. Australia is very visible on the global stage. We could be a positive example for stronger action.

The first step is reducing coal-fired energy generation in favour of cheaper and cleaner renewable generation and storage technologies. That process has already started, and it needs to accelerate. Next is the electrification of transport, heating and industrial energy use.

Then phasing in zero emissions technologies for some industrial commodities like fertilizers, cement and steel. That transition also offers tremendous economic promise through clean energy-based export industries, on the basis of Australia’s great advantage in renewable energy.

The agricultural and land sectors will also play a big role in the journey to net zero emissions. This includes reducing emissions from livestock, stopping deforestation and increasing investment in restoration and carbon sequestration in soils.

Australia is well positioned to meet this challenge. We have a skilled workforce, good governance systems, a strong industrial base and renewable energy resources that are the envy of the world.

The good news is that it’s not too late to avoid 3°C. But we must act now. We need our political and business leaders to make decisions now about how we as a society respond to climate change to give us a fighting chance of stabilising near the 2°C mark. And this transition does not only avoid massive pain and economic cost from climate change, it also opens up economic opportunities for Australia.

As David Attenborough wrote in ‘A Life on our Planet’, humankind has an unequalled ability to solve problems. We know what the problems are when it comes to climate change. And we have the solutions. We can do this. We must do this. 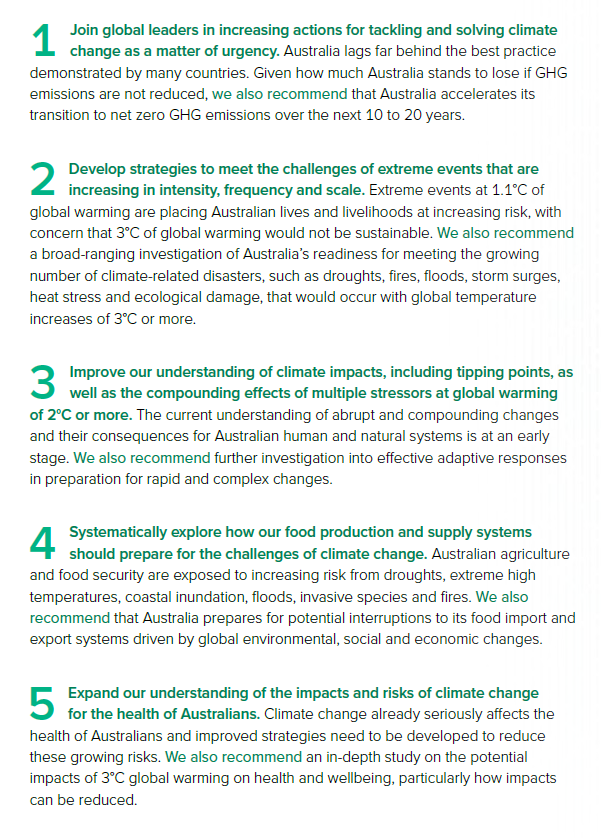 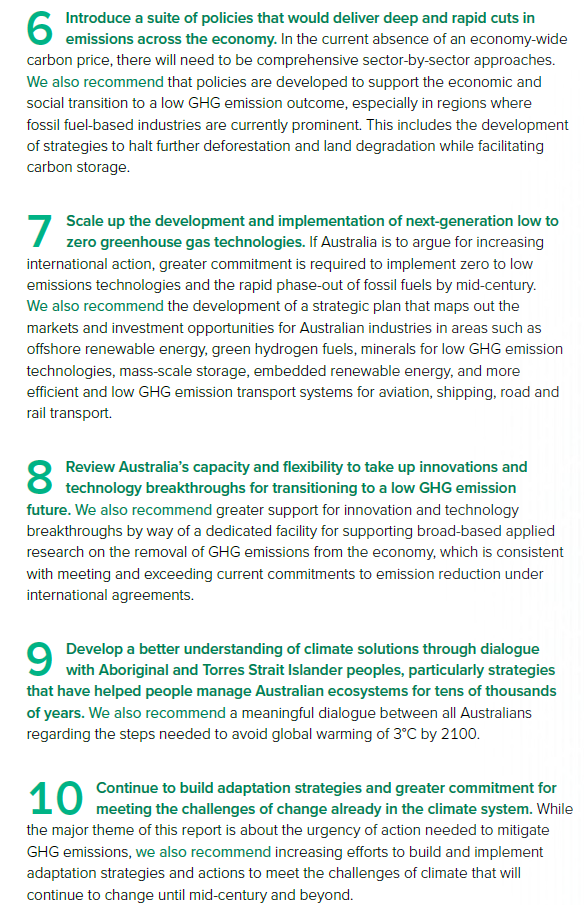