As Australians prepare to go to the polls on Saturday, celebrated climate scientist and author Professor Tim Flannery has urged people to get political for the planet, in a stirring keynote address themed around hope, forgiveness and action.

Delivering the keynote address from Geneva to psychiatrists gathered in Sydney to discuss climate change and mental health at the annual Congress of the Royal Australian and New Zealand College of Psychiatrists this week, Flannery said the major roadblock on climate change in Australia was political.

“What follows is that the most urgent action we can take is getting involved in politics,” Flannery said. “That’s where the change needs to happen now.”

Study after study had demonstrated it was possible to decarbonise Australia within five years but what was missing was political will, government policy and an aggressive emissions reduction target to empower and unite the community, said Flannery.

“There is something profoundly wrong with our political system at the moment,” he said, adding that political parties “have a lot to answer for”, distorting morality and sequestering MPs from the views of their constituents behind party lines when they would be “well served to take a lead in this and listen to their own children.”

“You would think that people who represent others would have a deep empathy to their plight, but that is not always the case,” said Flannery pointedly, noting that government had a significant role to play. Not only on the policy front but in driving “honest dialogue” and more respect, listening and empathy with the generation that stood to bear the brunt of the crisis.

Flannery, a former Australian of the Year and Chief Councillor of the Climate Council, described conservation of mental wellbeing as a form of sustainability that would be crucial in meeting the challenges of the climate crisis.

He said reconciliation and forgiveness for the intergenerational betrayal of failing to act was a really important step, saying the “very real” potential for anger to escalate and become corrosive was something that troubled him, reflecting on the lessons of history.

Flannery gave the example of toxic resentment amongst young Germans post-WWII in response to the lack of accountability for crimes committed there during the war, manifesting in the emergence of the far-left extremist group Baader Meinhof.

He acknowledged that his generation and those before would not live to see the results of a problem set in train 200 years ago, which had rapidly accelerated in recent decades. One third of all the global greenhouse gases emitted in human history have been recorded in the years since Flannery was Australian of the Year in 2007.

But he said they could lay the foundations for change and make a contribution to reducing emissions by increments that, however small, would make a difference in future.

Optimism and hope were the overriding themes of Flannery’s talk, and an attitude he said would be critical in accelerating reform, in a context where “we no longer have time”.

“We are doing the right things, we just need to do them faster,” he said, calling for a “proper regulatory framework to get us sufficiently quickly to where we need to go”.

If we continued burning fossil fuels for just a few more years, all to line the coffers of an avaricious few, Flannery said it would “cost us the planet”, setting in train a series of irreversible tipping points that would unleash cataclysmic events.

Were we able to head off the worst, palaeontology-trained Flannery said the world would return to climate conditions last seen on Earth three to five million years ago in the Pliocene era when Australia teemed with biodiversity, rainforest stretched all the way from Papua New Guinea to Victoria, and the continent’s centre was rich with freshwater lakes home to flamingos and dolphins.

It wasn’t the destination that Flannery said worried him but the rapidity with which this disruptive shift would take place, at a speed and scale unseen before, with Australians already getting a taste of what this would entail – megafires, relentless floods.

“As Australians I don’t need to tell you about climatic disruption – you’ve lived it,” he said.

Small, discrete, tangible actions – installing solar panels, reducing meat consumption,  buying a hybrid vehicle, running conservation projects – were his panacea to the overwhelming grief and hardening to the facts he admitted feeling at times and witnessing among his colleagues.

“Small initiatives are where I get meaning,” he said. “What I do is try to make a difference.”

For climate scientists, seeing a way out and knowing what needed to be done on a practical level helped to remain positive, Flannery said. Taking the long view also helped, reflecting on how far we had come over the past ten years.

Every now and again Flannery said he had to pull himself up from his role as the “jolly hangman” and put himself in the shoes of someone hearing the news for the first time.

“We suffer climate grief ourselves and we have the potential to propagate climate grief if we don’t, I suppose, do our job to the highest standard,” Flannery said.

Flannery singled out handling these conversations with young people as something to be approached with particular care, a topic that was covered in some detail in a separate session looking at research into climate change and mental health.

That session heard that young people were a priority population and that the psychological impacts of climate change were already very real in this group.

Crandon said these impacts were, in part, mediated by factors such as the extent to which the government involved them in conversations around and decision-making about climate change.

Inaction by governments was associated with intensifying climate anxiety in the young.

“Climate anxiety is the initial alarm bell telling you that something needs to change,” Crandon said.

Session chair Dr Cyebele Dey reflected on the lessons from Aboriginal and Torres Strait Islander peoples around practices of caring for Country, and the place of ceremony in helping to connect with the natural environment.

Dey noted that Indigenous peoples around the world stood to shoulder a disproportionate climate burden: “The impacts of climate change on mental health are affecting the least responsible first and worst.”

PhD Scientia Scholar Chloe Watfern shared her personal experiences of climate distress during the 2019-20 bushfire crisis, reflecting on the guilt and despair she felt for future generations, and how important it had been to shift focus to building hope, resilience and connection.

Dr Charles Le Feuvre, from Psychology for a Safe Climate, stressed the protective effects of taking action such as joining the school climate strikes.

He asked Flannery how he managed to stay optimistic in the face of such detailed knowledge of the most dire predictions.

“I don’t think of it in terms of hope, I think of it as more a day to day thing,” Flannery said. “Every moment matters… every small thing we achieve still counts.”

We still “have it within our grasp to stabilise the climate system” and even if that wasn’t able to be achieved, he said every decrement of decrease to emissions – no matter how infinitesimal – would make a difference.

It was also important to celebrate every small win because it “helps to shift the dial of our feelings”.

He advocated meeting climate denialism with curiosity and compassion, saying respect had to be the starting point. Even if in profound disagreement, he urged delegates to thank difficult conversants for engaging, find common ground, and offer exits from rhetorical corners.

In a panel discussion following Flannery’s talk with researchers from the earlier session, Le Feuvre advocated that there needed to be space for despair, which could transform into solidarity if shared and serve to renew hope.

The panel also discussed the need for hope to be active rather than passive, with the latter bordering on avoidance or a get-out-of-jail free card.

Instead, delegates heard, it was essential to “make the hope that we seek to inhabit”. 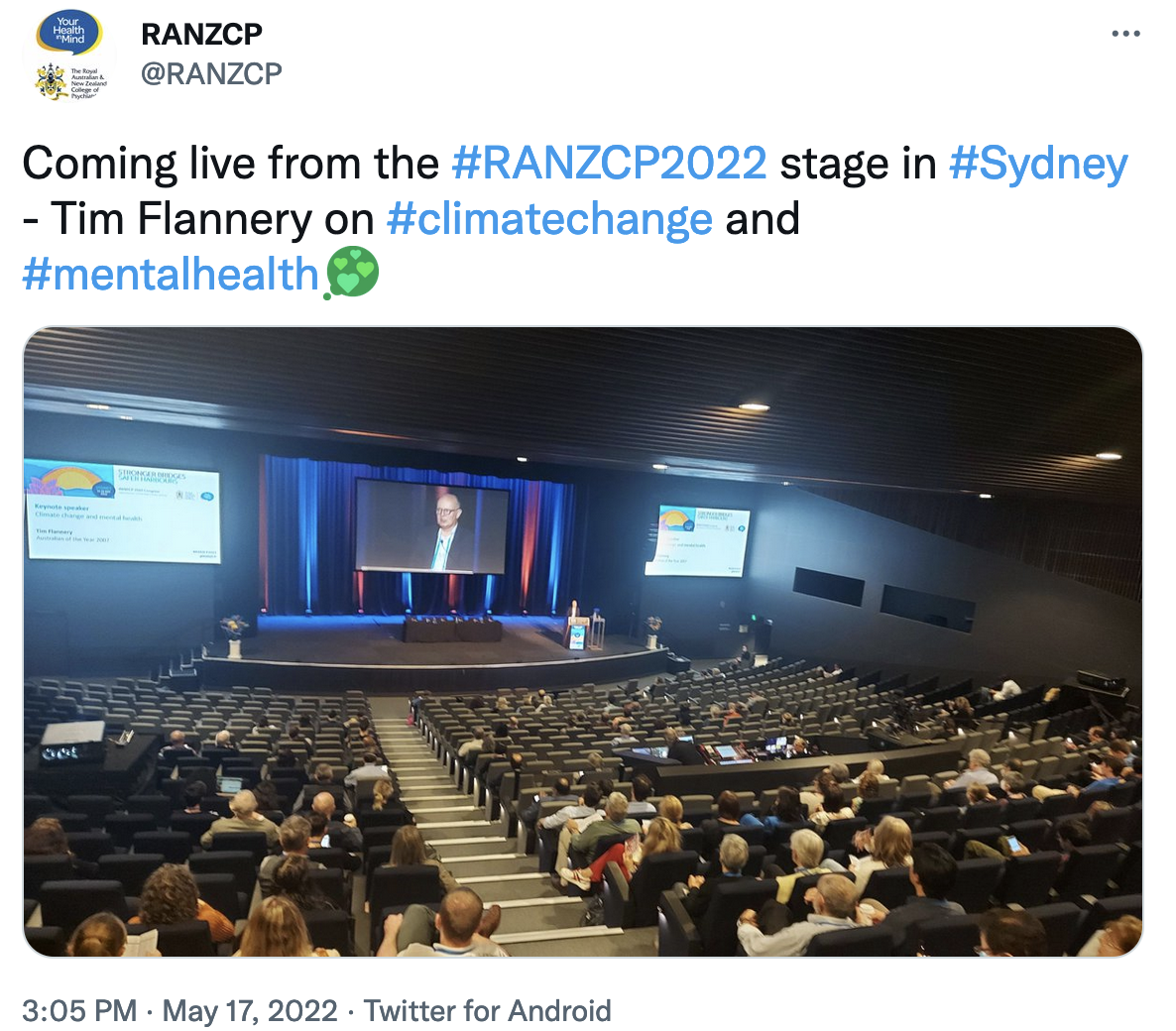 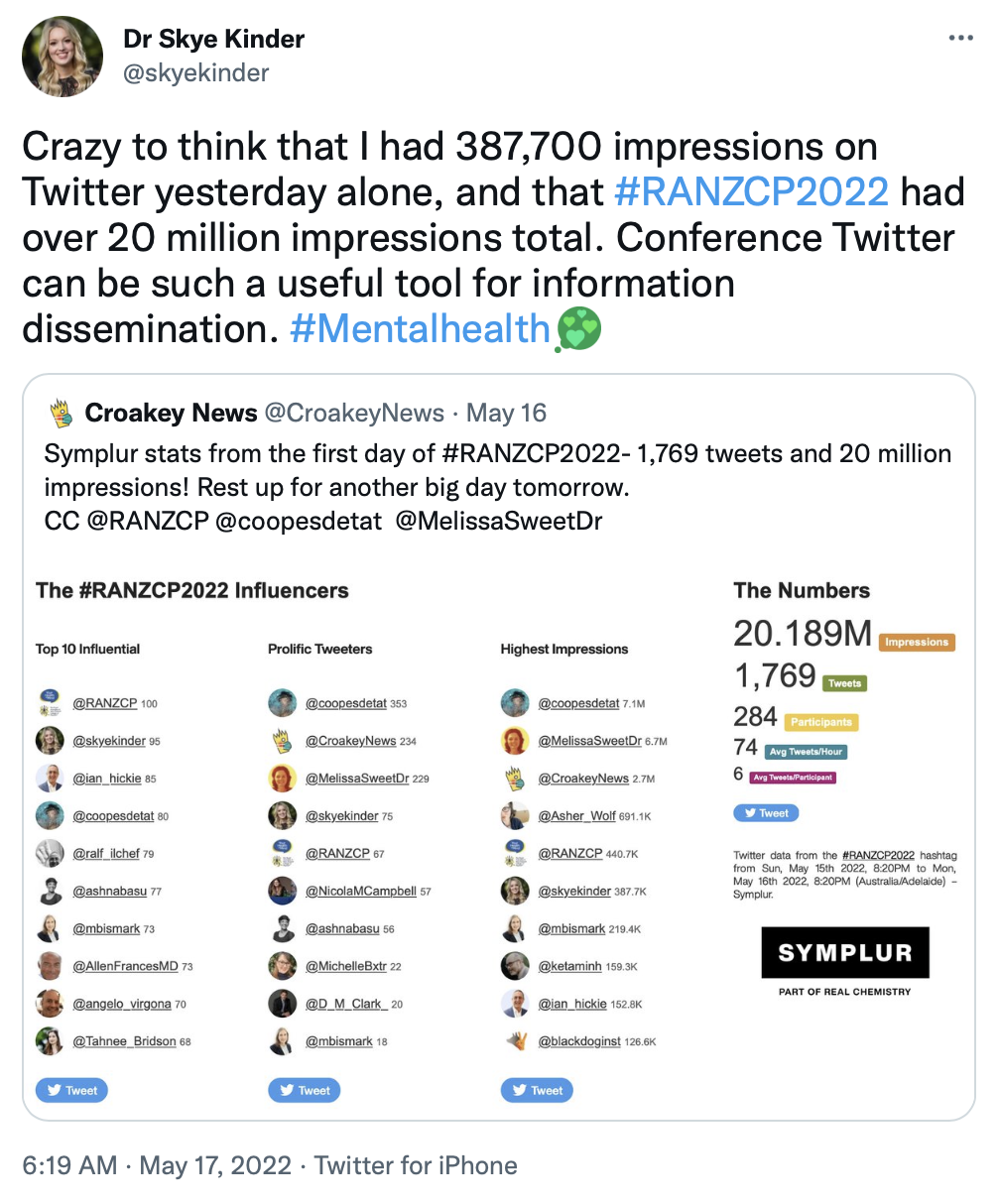 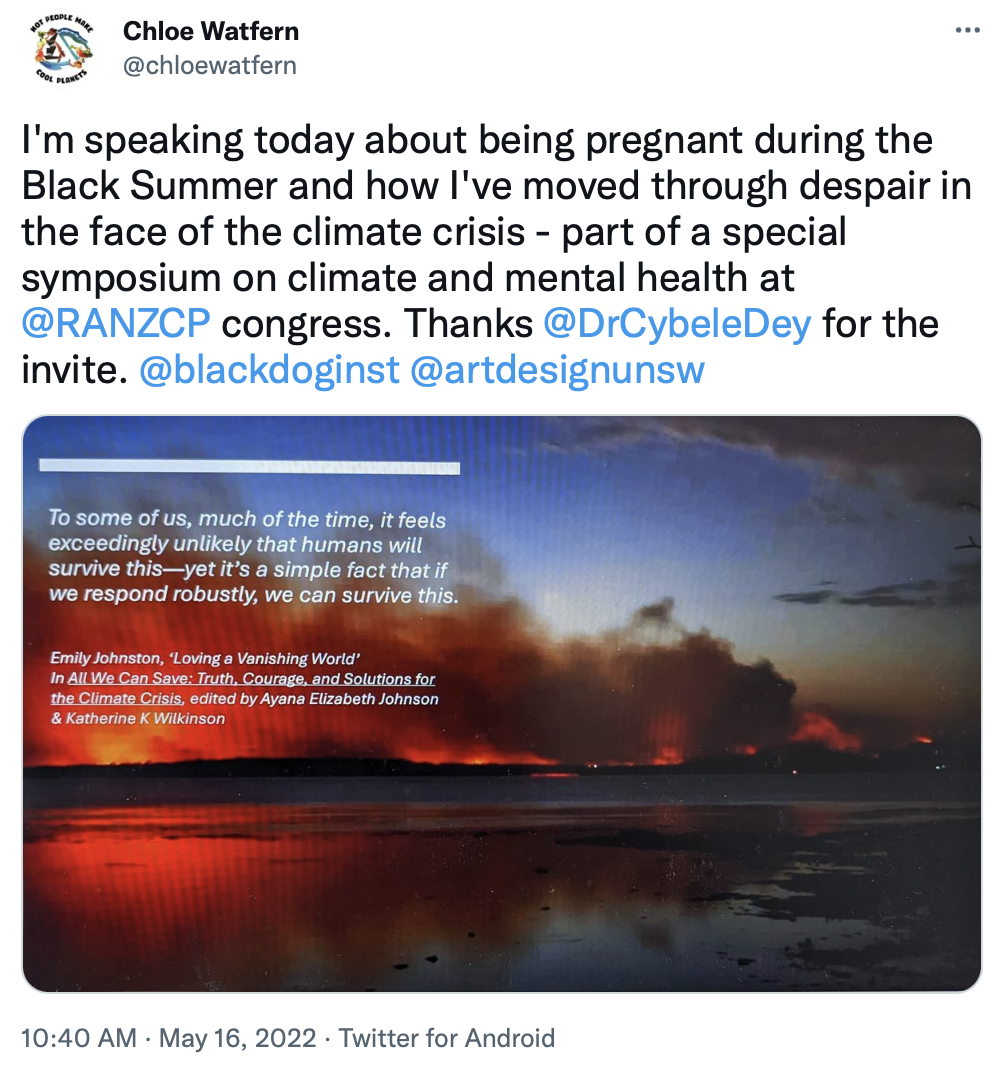