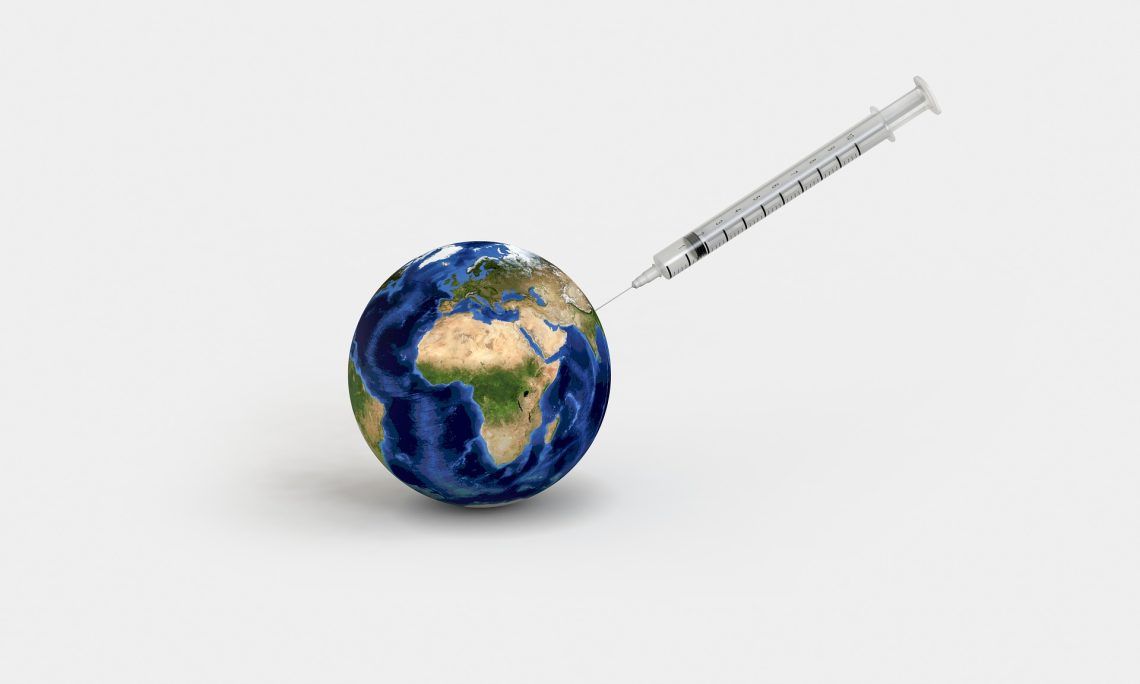 A "grotesque” gap in vaccine access. Photo by Arek Socha of Pixabay.

Australia’s COVID vaccine rollout gathers pace, but global inequity may be elephant in the room

Introduction by Croakey: With initial booking bungles, supply concerns and deliveries impacted by devastating flooding across New South Wales and into Queensland Australia’s COVID-19 vaccine rollout has got off to a rocky start, highlighting not just an unprecedented effort but longstanding concerns about our fragmented health system.

But, despite the early failures on our doorsteps, experts are warning that we should be taking greater notice of a widening chasm in vaccine access.

“More grotesque every day” was how World Health Organisation chief Tedros Adhanom Ghebreyesus described the growing gap between the number of vaccines being given in rich countries and those administered through COVAX, the scheme established to ensure equitable access to vaccine technology.

Thousands of Australians rolled up their sleeves this week to receive their first dose of Oxford University/AstraZeneca COVID-19 vaccine.

As of 21 March, more than 281,000 Australians had had a vaccine dose administered, and a further 250,000 vaccinations were expected to be given in this week.

Adults aged 70 and over, Aboriginal and Torres Strait Islander people aged 55 years and over, and people with specific underlying medical conditions were among those included in the Phase 1b rollout.

With initial booking bungles, potential supply issues, and flooding preventing delivery to some parts of NSW, the vaccine rollout was off to a rocky start for some, with health experts saying the Federal Government needs to lift its game, comparing us to the mass vaccination efforts of the United Kingdom and United States.

As The Age wrote today, such concerns may seem lower order when compared with the severe health crises facing the United States, India, Brazil and countries in Europe.

But, it said, if we are entering a new era of pandemics, “then it becomes vital that the Morrison government’s responses prioritise successful systems over stirring announcements and photo ops”. 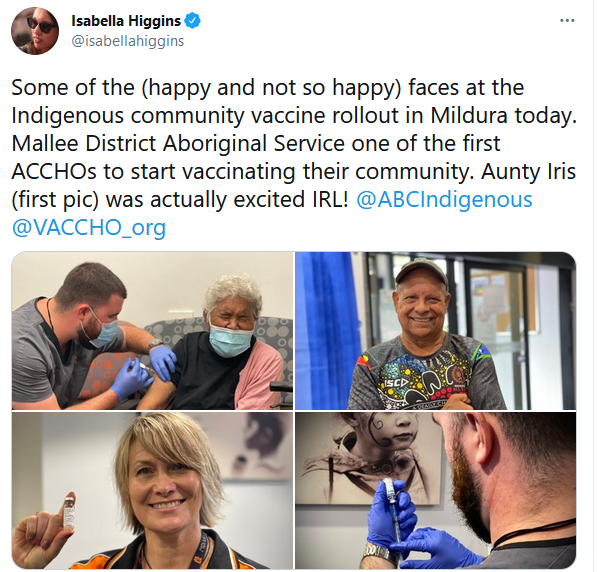 Earlier this month, Italy’s decision to block 250,000 doses of vaccine to Australia had caused alarm, but the announcement by the Therapeutic Goods Association (TGA) last Sunday of local vaccine manufacture helped to allay concerns.

The TGA noted that 1,000 clinics had signed up to deliver vaccines in the initial wave, and this would increase to 4,000 by the end of April. Also, 100 Aboriginal Health Services and 130 Commonwealth operated GP-led Respiratory Clinics would deliver vaccines.

The TGA said this staged scale up aligned with the supply of the locally-produced AstraZeneca vaccine.

Speaking on ABC Radio this week, Chief Medical Officer Professor Michael Kidd said the rollout would be quickly scaled up over the next three weeks to providing “at least 400,000 doses a week”. 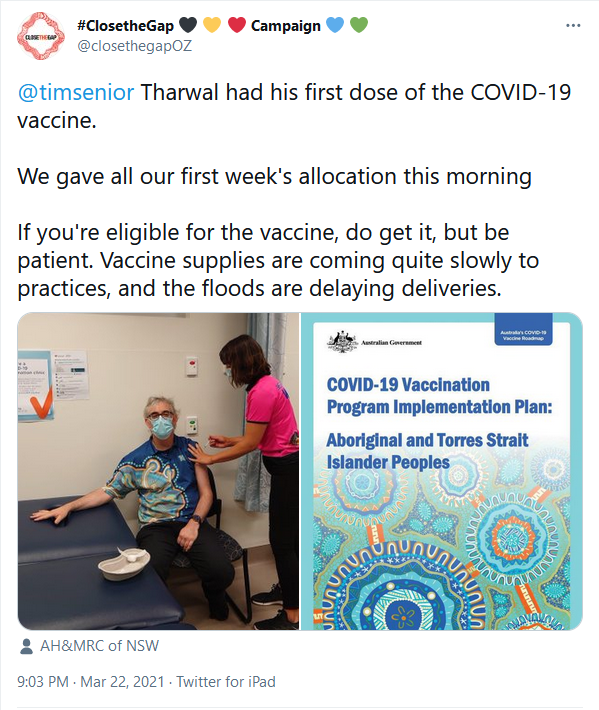 Kidd noted that that flooding had interrupted deliveries to some NSW towns (at least 50 GP clinics on the first day of the 1b rollout, according to the Sydney Morning Herald), impacted by state-wide, devastating flooding.

“Even though the rollout has literally just started and we’ve already had a number of issues, we will cooperate and continue because this is part of an international public health rollout of historical importance,” Price said. “Public health is bigger than anyone or anything right now and we are ready to play our part.”

Australia needed its GPs to be “front and centre” in the program, Price said. “Vaccinations are part of what we do, every year, whether or not there is a global pandemic threatening the lives of literally hundreds of millions of people.” 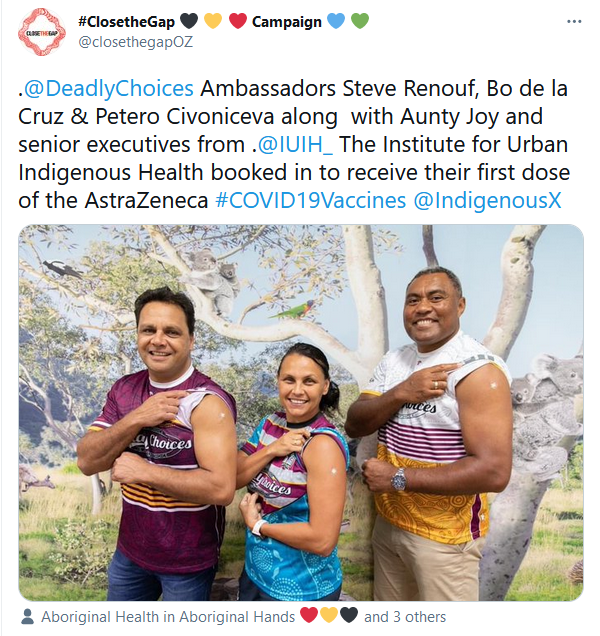 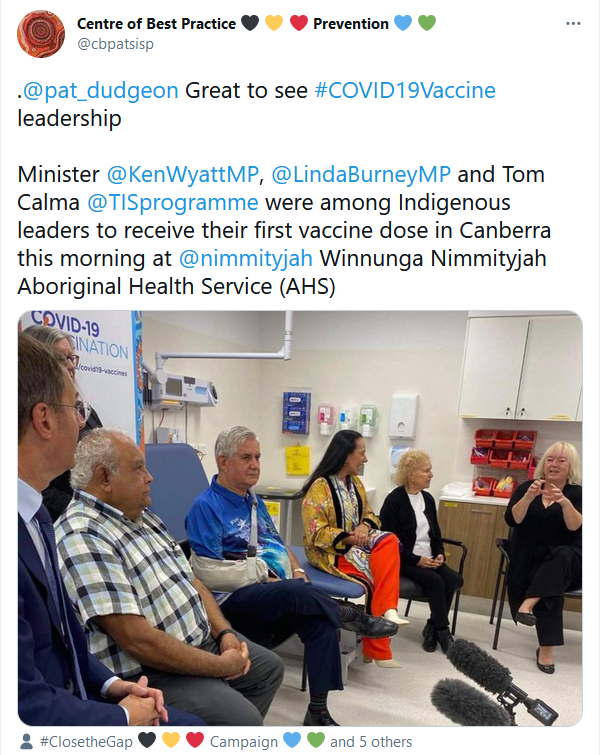 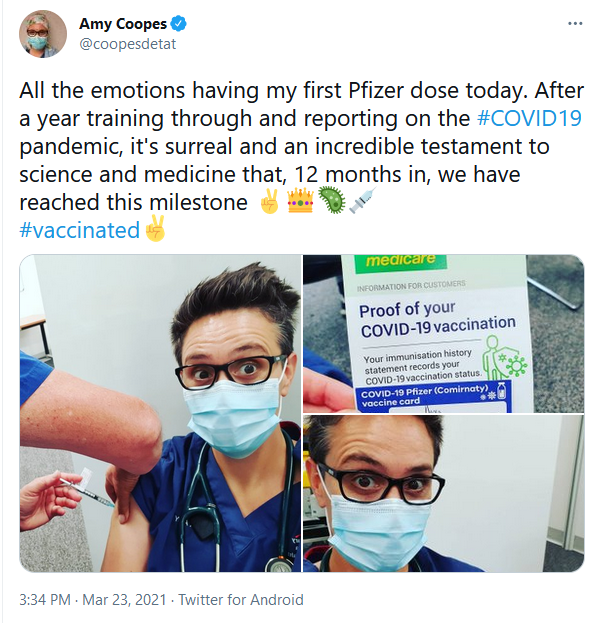 Practice nurses, however, have voiced frustrations over requirements that they are supervised when administering the vaccine.

“That means rural and regional areas that currently have a nurse practitioner providing health care services, will not be able to access the COVID-19 vaccination, they may have to travel significant distances to get the vaccine,” Boase told the ABC.

Writing in the Sydney Morning Herald, Duckett acknowledged that, with no virus circulating in the community, there was not the same degree of urgency to vaccinate here as in countries with high infection rates and death tolls. Still, he said, the clock was ticking.

“The target for the end of March is four million doses, yet only a tenth of that has been delivered,” Duckett wrote. “The end-of-October deadline for full rollout has been deferred by three months already. There have been well-publicised failures – overdosing of patients by a Commonwealth subcontractor and vaccines tipped down the sink.”

Duckett contrasted Australia’s sluggish rollout with the mass programs initiated in the US and the UK, which, on one day, administered more than 700,000 doses.

To get back on track, Duckett called for “less hype” and a focus on managing the rollout. He said the Commonwealth should set and publish real targets and achievements.

He also called on the Commonwealth to engage with the states in the vaccination effort.

Professor Brendan Crabb, director and CEO of the Burnet Institute, said the speed at which vaccination was rolled out was not Australia’s biggest concern.

“A delay of a few months will essentially change nothing in Australia,” Crabb told said The Age.

“In the absence of herd immunity … you will need some level of public health intervention, to run side-by-side vaccines. And probably for ever, as long as we have [the] virus.”

Crabb said of more pressing concern were outbreaks in other countries, that may give rise to new variants that challenge vaccine effectiveness.

He warned that Papua New Guinea might, in the next month, have between 100,000 and one million people infected with “who knows what variants”.

“The best protection for out own vaccine program is to not have mutant viruses.”

Papua New Guinea was hoping to start its vaccination program this week after receiving the 8,000 doses of the AstraZeneca vaccine sent from Australia.

The vaccine arrived as the country’s health system was struggling to cope with an escalating number of COVID cases. This week the country reported 295 cases in one day, with the number of cases tripling in the past month. 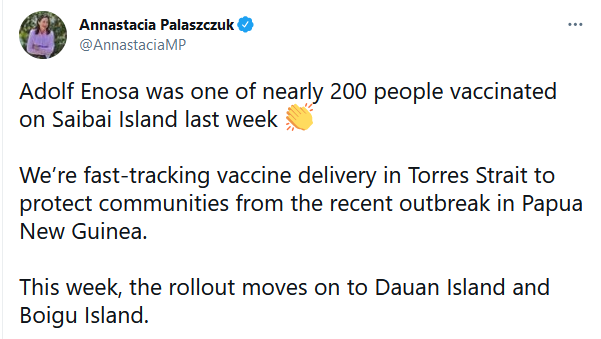 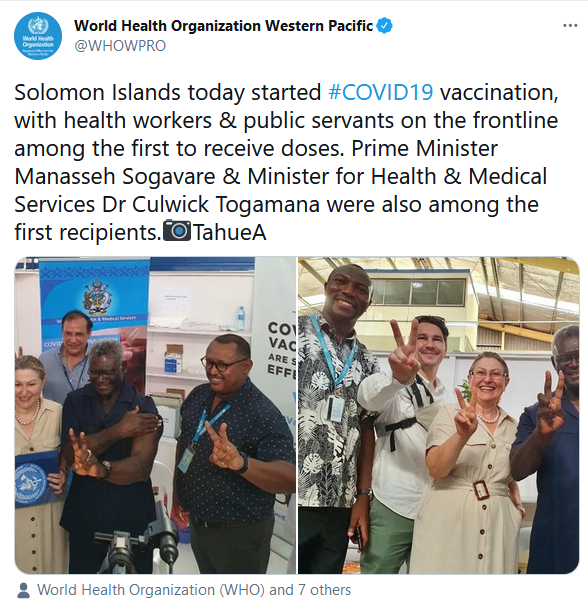 And while another Pacific neighbour is thankfully COVID free, former ABC and SBS journalist Ginny Stein, now living in Vanuatu, has written of the nation’s fears.

She said while wealthier nations like Australia had been able to pre-order vaccines, Vanuatu had to be content that these nations promised to “keep them in mind” to send on vaccines “when the time came”.

“The truth is we’ve got none yet. Not one dose,” Stein wrote. “Being COVID free, right now, it is certainly not the end of the world. But it means our borders can’t open, and our tourist-dependent economy is as dead as it was the day borders shut.”

And, she added, if COVID was to arrive in Vanuatu, the nation’s 82 islands would be “screwed”. 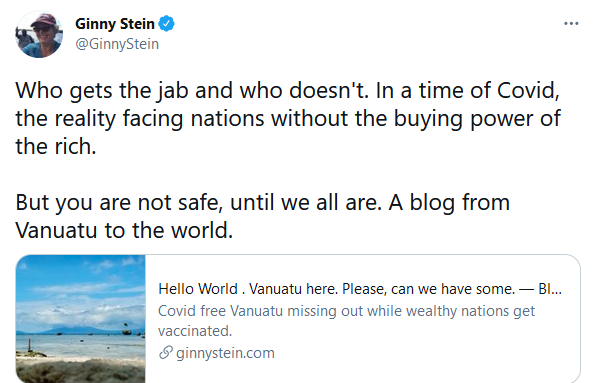 In a speech to the UNICEF ‘Vaccinating The World’ Breakfast in Canberra this week, Senator Penny Wong, Shadow Minister For Foreign Affairs, acknowledged these regional concerns.

“We know particularly, Papua New Guinea faces such a difficult period ahead. We will continue to give bipartisan backing to ensure that Australia’s assistance is implemented urgently and effectively,” she said, urging the Government to consider expanding the number of doses to ensure, as far as possible, that frontline workers are vaccinated.

“What these recent events remind us of, is how closely Australia’s long-term recovery from the pandemic is tied to that of those in our region,” Wong said. “We won’t defeat this virus unless we defeat it everywhere.”

Sadly, many developing nations are being left behind as wealthier countries swoop up vaccine supplies.

To date, about 75% of the vaccine doses administered globally have been in just 10 countries, the New York Times reported. And at least 30 countries have not received a single dose.

On Monday, Tedros Adhanom Ghebreyesus, Director-General of the World Health Organization (WHO) , said the growing gap between the number of vaccines being given in rich countries and those administered through COVAX, the scheme established to ensure equitable access to vaccine technology, was becoming “more grotesque” by the day.

“In January, I said that the world was on the brink of a catastrophic moral failure unless urgent steps were taken to ensure equitable distribution of vaccines,” Ghebreyesus said.

“We have the means to avert this failure, but it’s shocking how little has been done to avert it”, he added, noting that WHO had been working “day and night to find solutions to increase the production and equitable distribution of vaccines”.

Ghebreyesus noted that AstraZeneca was the only company that had committed to not profiting from its COVID-19 vaccine, and he urged other vaccine producers to follow suit.

Most countries in Africa are still in the early stages of vaccination efforts, mainly due a shortage of shots, The Conversation reported.

African nations are trying to secure vaccinations through the COVAX facility, but also through the COVID-19 African Vaccine Acquisition Task Team, and from agreements with manufacturers and donations from other countries. 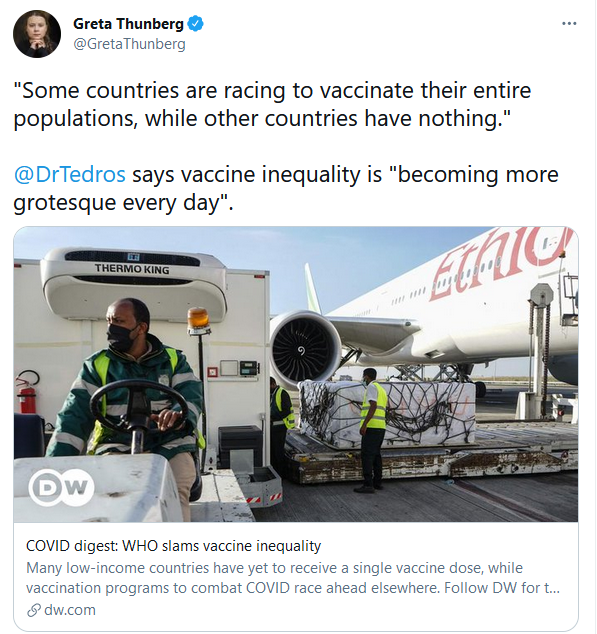 Writing in The Conversation this week, La Trobe University’s Deborah Gleeson noted that poorer countries, including some of Australia’s closest neighbours, were unlikely to achieve widespread vaccination until 2023.

But, she wrote, Australia had shown no appetite for waiving some aspects of the Agreement of the Trade-Related Aspects of Intellectual Property Rights (called the TRIPS Agreement), that would allow others to make COVID-19 vaccines without the vaccine developers’ permission.

“In October 2020, South Africa and India proposed waiving certain provisions of TRIPS that give the owners of the intellectual property exclusive rights over the manufacture and sale of COVID vaccines. The waiver would only apply to COVID-19 medical products and only for the duration of the pandemic. This would allow others to make COVID-19 vaccines without the vaccine developers’ permission,” Gleeson wrote.

The TRIPS waiver is supported by 118 of the World Trade Organisation’s 164 members – more than two-thirds of its membership, she said.

“Australia, however, has joined with Canada, Chile, Colombia, New Zealand, Norway and Turkey in supporting a counter-proposal that argues provisions already in the TRIPS agreement are good enough.”

Gleeson said Australia’s support for this counter-proposal was “a distraction at best”.

“It can’t bring about the fundamental change the TRIPS waiver could generate. Nor is it likely to lead to the world being vaccinated sooner.” 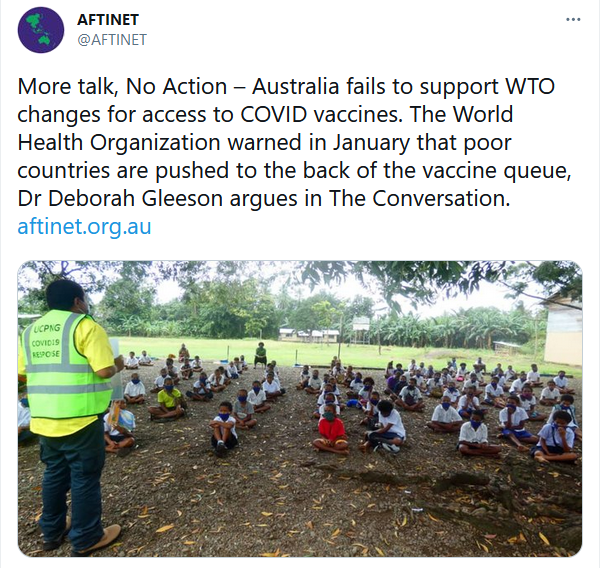 PrevPreviousMemo Liberal women: if you really want to confront misogyny in your party, you need to fix the policies
NextAnother catastrophe: back-to-back climate emergencies are taking their toll on our healthNext