"Tobacco packages can no longer serve as mini billboards that make cigarettes look aspirational and desirable." Photo by Amritanshu Sikda on Unsplash.

After a decade-long battle, Australia’s groundbreaking tobacco plain packaging laws have cleared their final hurdle with the World Trade Organisation.

The University of Sydney’s Dr Becky Freeman writes that the decision is not just a win for public health, but a sign that even the deepest of corporate pockets is no match for evidence-based policy.

The article below was first published in The Conversation.

The decision, handed down on June 9 by the World Trade Organisation’s appeals body, that Australia’s plain packaging tobacco control policy doesn’t flout WTO laws marks the end of almost a decade of legal wrangling over this landmark public health policy. And more importantly, it paves the way for other nations around the world to follow Australia’s lead.

In 2012 Australia became the first country in the world to implement tobacco plain packaging laws, having recognised that the tobacco industry uses packaging both to market cigarettes and to undermine health warnings.

The industry has long acknowledged the powerful role of packaging design in attracting consumers and reinforcing brand image. A 2017 trade article on the “premiumisation” of cigarettes explained the rationale behind glossy packaging:

Features such as velvet touch, soft touch, etching, rise and relief can be applied across the surface of the packaging to make the product more impactful and raise customer engagement. The look of the packaging such as intense metallics through the use of foil simulation inks can also give cigarette packaging the luxurious effect and adds on to the premium feel of the product.

The “plain packaging” mandated by Australia’s laws is in fact anything but. It features graphic, full-colour health warnings presented on a drab brown background. Brand logos, designs, emblems, and slogans are banned; product brand names remain, but must appear in a standardised font.

The result means tobacco packages can no longer serve as mini billboards that make cigarettes look aspirational and desirable.

The tobacco industry launched three separate legal challenges to the law. First, JT International and British American Tobacco filed a lawsuit in the Australian High Court. Next, tobacco firm Philip Morris sought legal protection for its packaging designs under an existing investment treaty between Australia and Hong Kong. Finally, the industry filed a dispute through the WTO on behalf of four tobacco-producing countries: Cuba, Honduras, Indonesia and the Dominican Republic.

In 2012, the High Court ruled in favour of the Australian government, and in 2015 the investment treaty tribunal dismissed Philip Morris Asia’s claim. The WTO also ruled in Australia’s favour in 2018, but the Dominican Republic and Honduras appealed.

That appeal was denied last week, meaning all legal challenges to Australia’s plain packaging laws have now been finally and decisively overruled – more than a decade after the then Prime Minister Kevin Rudd first announced the policy in April 2010.

The WTO’s appeal body agreed plain packaging laws are likely to improve public health and that they are not unfairly restrictive to trade.

The appeal was not expected to succeed, so the ruling comes as no surprise. But despite this, legal wrangling has become a standard tobacco industry practice, particularly through international channels such as the WTO. One reason is because the slow and cumbersome legal process can serve as a deterrent to other countries, who may hold off implementing similar laws until the legal outcome is known.

Encouragingly, this stalling tactic seems to be losing its power. Countries such as France, the United Kingdom, Ireland, Norway, and New Zealand have all forged ahead with plain packaging legislation despite the outstanding appeal.

Now, however, lower-income countries can also confidently pursue plain packaging measures without fear of falling foul of the WTO. 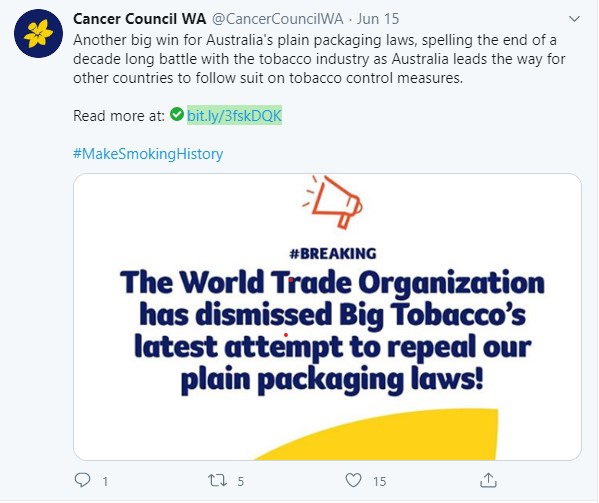 Australia’s plain packaging law was groundbreaking at the time. But now the tobacco industry has responded with a range of tactics to exploit loopholes and offset the impact on their brands, meaning governments need to come up with yet more counter-measures.

Once plain packaging was implemented, the tobacco industry quickly trademarked new brand names, such as Imperial Tobacco’s Peter Stuyvesant + Loosie, which contains 21 cigarettes instead of 20, and advertises the bonus cigarette within the name.

Canada’s plain packaging laws, enacted in February 2020, directly control the size and shape of the cigarettes themselves. For example, the law bans slim cigarettes targeted at young women who associate smoking with slimness and fashion.

The WTO upheld Australia’s plain packaging laws because the government had convincing public health research to show the positive impact of plain packaging on public attitudes to smoking.

Seen in that light, the decision isn’t just a win for public health. It’s also an encouraging sign that evidence-based policies can defeat even the deepest of corporate pockets.