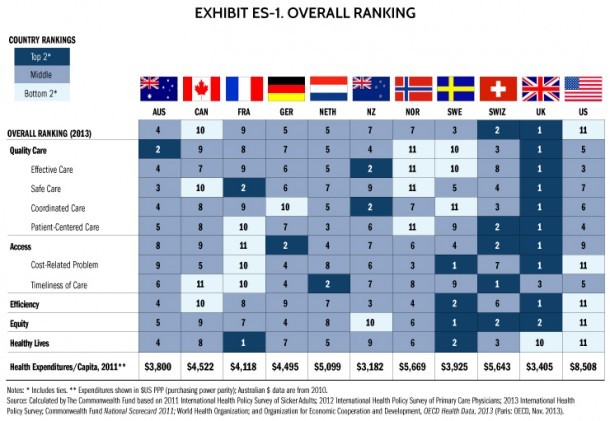 The evidence continues to mount against the Federal Government’s proposed health measures and the rationale for their introduction.

The latest is the international Commonwealth Fund report – Mirror, Mirror on the Wall: How the performance of the US Health Care System compares internationally – which ranks 11 health systems across the globe on a range of criteria.

In the post below, Adam Stankevicius, Chief Executive Officer of the Consumers Health Forum of Australia, looks at how Australia compares in a range of important areas, and the implications of measures like the proposed $7 copayments regime.

“According to the report, 16 per cent of Australians in 2013 did not fill a prescription; skipped recommended medical tests, treatment, or follow-up; or had a medical problem but did not visit a doctor or clinic in the past year because of cost.

“This is the situation now, before the introduction of a co-payment. The Government’s co-payment will significantly increase the cost barriers to quality health care for Australians, especially the poorest and sickest.”

It’s worth spending 30 mins on this clip to understand impact of budget on healthcare, via Tim Woodruff et al: https://t.co/GnOiSKJv3z

Before the Federal Government introduces dramatic changes to the health system, like a Medicare co-payment, it should read a new report comparing the performance of health systems in 11 countries.

The results of surveys by the Commonwealth Fund of New York tend to contradict the rationale of the Abbott Government’s drive to slash what it claims is Australia’s “unsustainable” growth in health spending.

On one measure, the report shows Australia has experienced the lowest growth in health spending of any comparable Western nation in the past three decades.  That is when measuring health spending as a percentage of GDP.  When it comes to average health spending per capita since 1980, Australia achieved the third lowest rate of increase.

While Australia’s health system rates fourth highest in overall performance, we rate poorly when it comes to access barriers like out-of-pocket costs.

The Government is planning to introduce a $7 Medicare co-payment when this report finds that 25 per cent of Australians already report their out-of-pocket medical bills at more than $1,000 a year.  Only cost-wracked American health consumers are more likely to experience such daunting health bills.

On the overall question of expense-related health problems which include factors like the 16 per cent of Australians who don’t see a doctor or get medicine because of costs, we come out third hardest-hit, with only France and the US rated harsher on health cost barriers.

However in other respects, Australia rates in the top half of the 11 nations surveyed, which also included Canada, Germany the Netherlands, New Zealand, Norway, Sweden, Switzerland and the United Kingdom.

If anything, the findings of this report highlight the need for deeper research into health system influences before blunt, one-off measures, like the co-payment, are taken to fix one aspect of the health costs dilemma.

The Consumers Health Forum has published research findings from several authoritative experts showing there are many other options we can consider to make the health system more effective before loading more expense on to consumers.

CHF is concerned that the Federal Government is considering extending health insurance to cover primary care, without a proper investigation of the implications. This concern is underscored by the report’s finding that nations which are heavily based on private sector/health insurance models do poorly compared to most western nations which rely largely on taxpayer-financed health systems.

While there are clearly some benefits from a better connected health financing system, it is highly questionable whether ever-more costly health insurance, which excludes half the population, is really the answer.
The Commonwealth Fund survey considers 80 indicators grouped into five dimensions of performance: quality, access, efficiency, equity and healthy lives.

The results are garnered from the fund’s international surveys which include a 2011 survey of “sicker” adults, a 2012 survey of primary care physicians and a 2013 survey of each nation’s general populations, including 2,200 adults in Australia. The report also draws on indicators from the World Health Organisation and the OECD.

Titled Mirror, Mirror On The Wall, the report is principally aimed at gauging how the US health care system compares with the those of the 10 other nations. It  clearly highlights that if ever there is an example of wealth’s failure to buy health, it is the US, which spends in total by far the most, averaging $US8,508 per capita a year on health care, compared to $US3,800 in Australia.  Yet the US comes in last overall when factors such as access, efficiency and equity are accounted for.

Now look at the UK, which with its National Health Scheme and modest private health sector is the second lowest spender on health care overall. Despite its low costs, the UK scores top place on most indicators including quality care, access and efficiency.

But there is one big snag to the UK’s otherwise proud score card which rather illustrates that, in health systems, all is not necessarily as it seems.

The UK scores second last on the healthy lives measure.  While doctors and their patients may be quietly satisfied with the NHS, it’s in the sick bay when it comes to what the report calls “mortality amenable to health care” — that is, deaths that could have been prevented with timely and effective care.

While forcing consumers to spend more on health so it can spend less may make the Federal Government feel better, but it is doubtful whether Australians will get a better health system as a result.