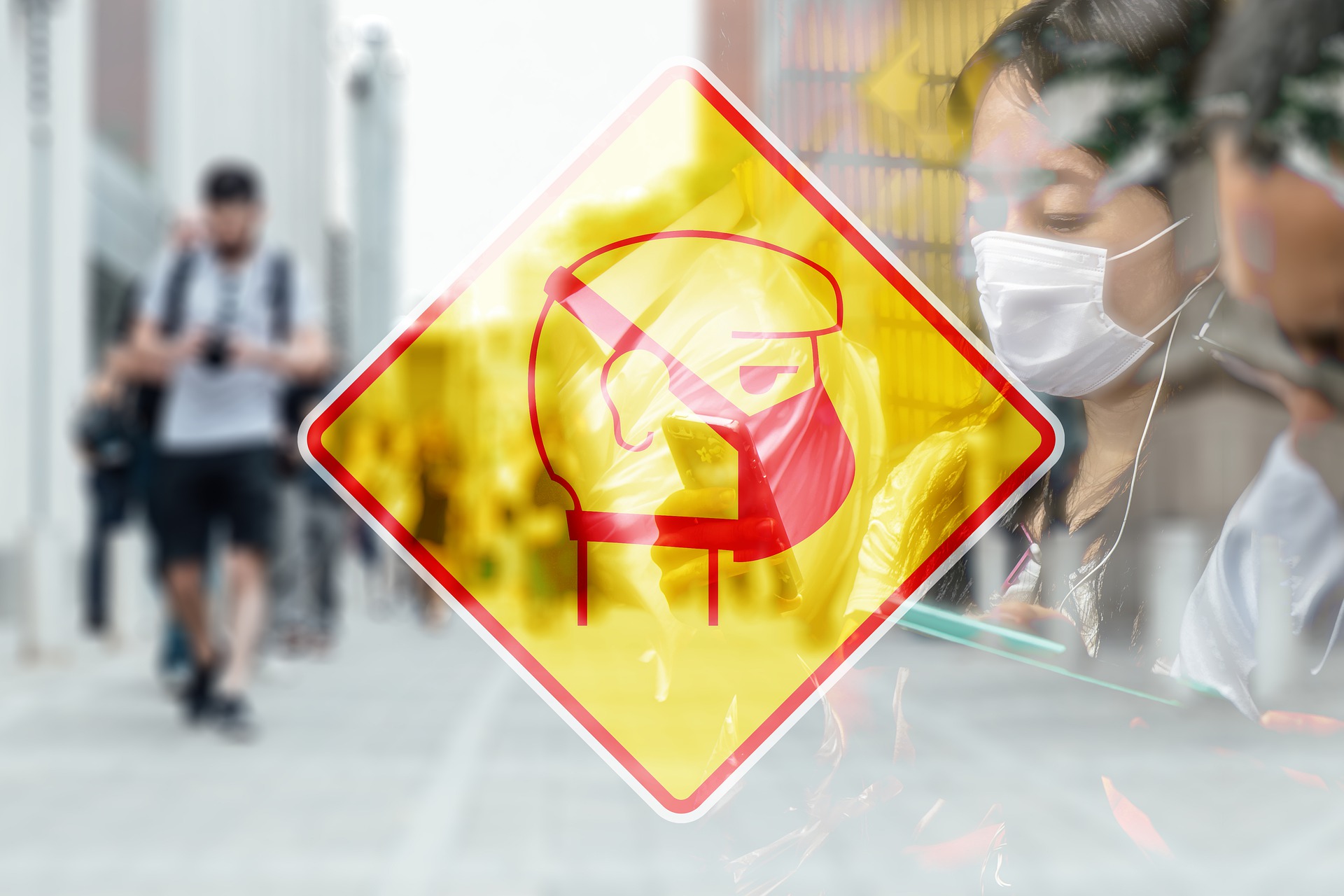 Australia’s response to the coronavirus – politics, communications and lessons

Responding to the threat of new infectious diseases, such as the novel coronavirus (nCOV), poses a number of policy and communication challenges for governments.

Both under- and over-reacting to potential public health emergencies can have significant costs and, without detailed information about the situation, finding the appropriate balance in responding to these threats is very difficult.

Accurate, transparent and well-targeted communication is vital but it is challenging for governments to deliver clear messages in rapidly evolving situations where there is a high degree of uncertainty.

Poorly worded, unclear and insensitive communications can fuel racism and discrimination and we have learned from previous epidemics that often the panic about a disease is more costly than the disease itself.

All these challenges are amplified by the political and economic environment in which governments operate which can influence both their response to public health threats and the way in which this response is interpreted by stakeholders and the broader community.

Below Croakey editor Jennifer Doggett discusses some of these issues in relation to nCOV and highlights the views of key experts and stakeholders on Australia’s response, including their suggestions for what we can learn from this experience to strengthen our capacity to deal with future public health threats.

One of the major challenges for governments in responding to nCoV has been the lack of comprehensive information available about the virus. Part of the reason for this is the fact that it is a new infectious agent (although related to other corona viruses, such as SARS).

Another reason suggested by some commentators is that China delayed releasing information about the virus, particularly in its early stages, due to concerns about the potential economic impact of quarantine and trade restrictions.

For example, The Lancet reported that it had received messages from Chinese journalists struggling to report accurate information from state authorities.

From one Caixin journalist: “For some reason, it’s very hard to get domestic experts to speak to the media now. But the public needs to hear more advice from experts.” Some observers say that independent infectious disease and public health specialists fear making public statements if those statements have not been approved by Chinese authorities.

International policy experts, including the Australian Strategic Policy Institute (ASPI) have argued that the WHO was put under pressure by China to hold off calling nCoV a public health emergency.

ASPI reported that Yanzhong Huang, senior fellow for global health at the Council on Foreign Relations had announced that  “The criteria for declaring a public health emergency of international concern have been met,” almost a week before the WHO made the declaration.

Other reports have cited China’s previous record in influencing the WHO to include traditional Chinese medicine in its compendium and to exclude Taiwan from the World Health Assembly as evidence of its power within the international organisation.

WHO has not commented on the role of any member countries in influencing its decision on nCoV but Director-General  Dr Tedros Adhanom Ghebreyesus made it clear that the WHO supported China’s response to the virus when announcing the global emergency.

While international politics may have informed the WHO’s position on nCoV, Australia’s domestic response also needs to be seen within a political context.  The nCoV outbreak occurred mid-way through a Summer where many Australians lost trust in their political leaders’ ability to manage a crisis due to the failure to mount an effective and coordinated response to the disastrous 2020 bushfire season.

Trust is a fundamental requirement for effective messaging and there is no doubt that the current government’s credibility has taken a recent hit, from both the mistakes made in responding to the bushfires and the more recent sports rorts affair.

Unfortunately, this lack of a credible authority on health issues can lead to people being more susceptible to fake news, such as the virus being found in energy drinks.

The complexity of the Australian health system and the division of responsibilities between federal and state/territory governments has also meant that people’s experience of our response to the nCoV can be very different, depending on their location and contact with health services.

This may also be one reason why health groups and commentators have contrasting views on the effectiveness of the response from federal and state governments to the nCoV outbreak.

Australia has responded quickly to the emerging issues surrounding the novel coronavirus outbreak originating in China.

The Chief Health Officers in each state and territory and the Commonwealth Chief Medical Officer have worked very closely to institute coordinated, considered responses, based on substantial planning and experience gained in recent years in dealing with SARS, MERS and other pandemic influenza outbreaks.

This group has communicated widely through multiple channels to health services, clinicians and the public.”

However, this view was not shared by Professor Glynn Kelly, the Chair of the Royal Australian College of GPs’ (RACGP) Specific Interests Disaster Management network, in this article at newsGP.

He strongly criticised the governments’ response, saying that “the lessons from the 2003 SARS pandemic have been ‘forgotten’ in dealing with the new coronavirus threat.”

The biggest problem at the moment is we don’t really know [anything] and there seems to be a lack of coordination around Australia.

We don’t know if it’s evolving or mutating….

At the moment people are getting one communication from one [health authority], one from another, and GPs are getting confused about which ones to follow … we really do need consistent communication across all jurisdictions.”

RACGP President Dr Harry Nespolon shared Kelly’s concerns about the provision of information to GPs, given their key role on the frontline of the health system and likely first point of contact for people experiencing symptoms.

“The situation would be improved if it was all consistent nation-wide, so we were in a better position to provide advice to patients. For example, some of the states have told people to call their GPs and the problem with that is GPs who are booked out are going to have to stop seeing practice patients and act as a free telephone triage service.

“They are not remunerated for that and it can take up a lot of time. Also, some clinics are only receiving surgical masks and not the N95 masks whilst some are receiving both – that sort of inconsistency can be frustrating.

“Also, there is different advice on tests. Some of the states are saying that patients should be taken to a hospital and tested in a negative pressure room and so the issue is about when and who should be doing the tests. That can require a call to the state health department and again that takes time out of the day.”

However he did welcome the Government’s efforts to provide GPs with masks.

“One particularly positive development is that last week I called on the Federal Government to open the nation’s emergency medical mask stockpile and this call was heeded. One million masks are being delivered to clinics across the country via Primary Health Networks.”

These differing views reflect the complexity of this issue and the many communications and logistical challenges involved.

Governments do appear to be making efforts to provide detailed information to consumers and the health sector.

The Federal Health Department has detailed information on nCoV on its website, including fact sheets and links to State/Territory Department websites with specific information about local services.

Australia’s Chief Medical Officer, Professor Brendan Murphy, has made a number of statements and media appearances to discuss nCoV issues and some state Chief Health Officers have also been active on social media providing advice and responding to concerns from the community.

However, some of the communications from the Department of Health have been criticised for lack of clarity and transparency. 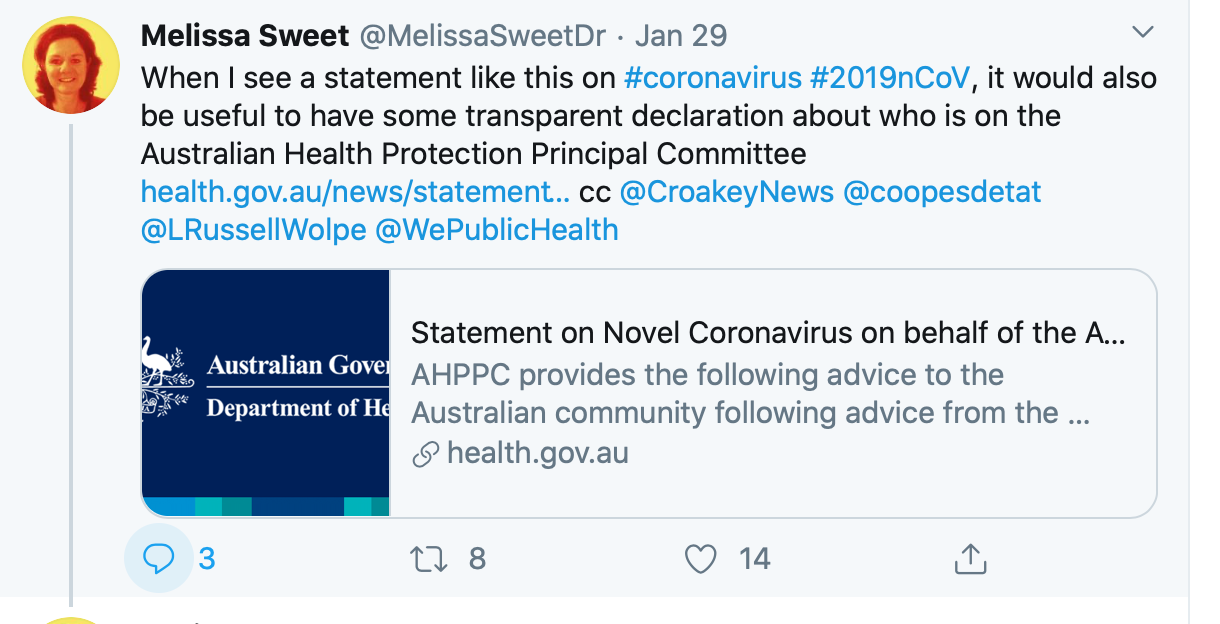 And questions remain about whether the information being provided is getting to those who need it.  Many contributors on Twitter described receiving inconsistent and inaccurate information or struggling to find any information at all. 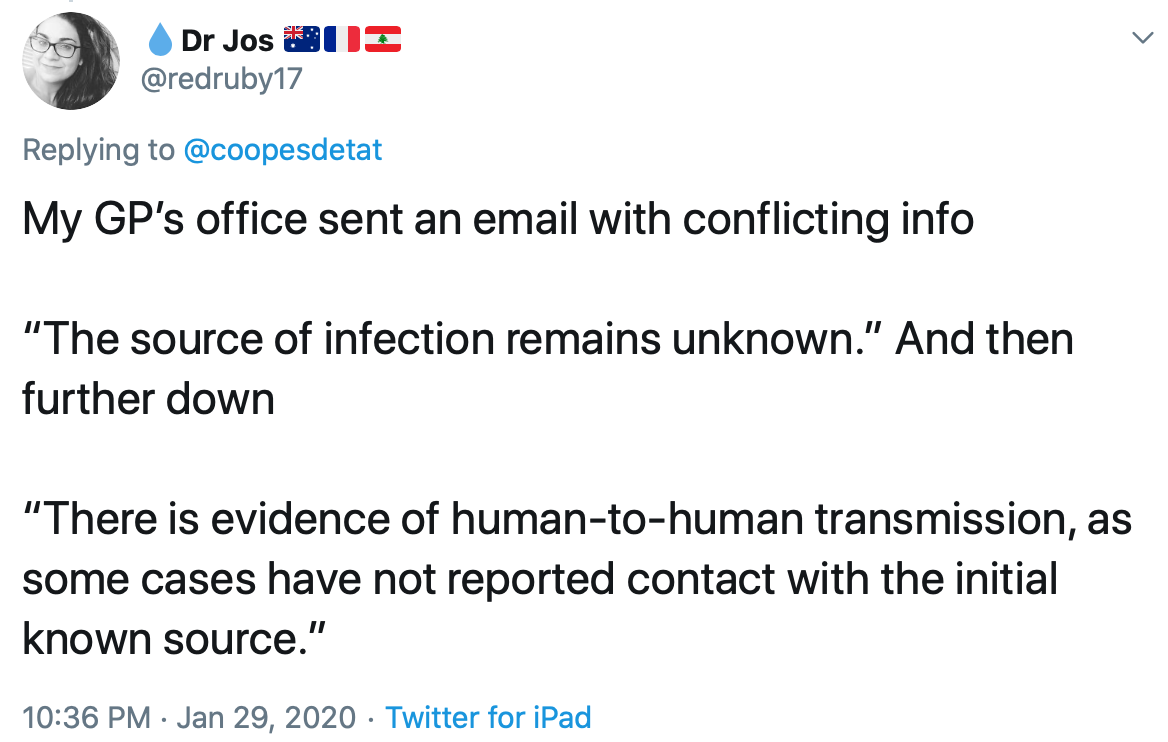 Journalist (and Croakey editor) Amy Coopes contrasted the communications on nCoV with those provided during the H1N1 outbreak.

She put the case for a more coordinated and centralised approach to communications, led by the federal government and disseminated via public broadcasters. 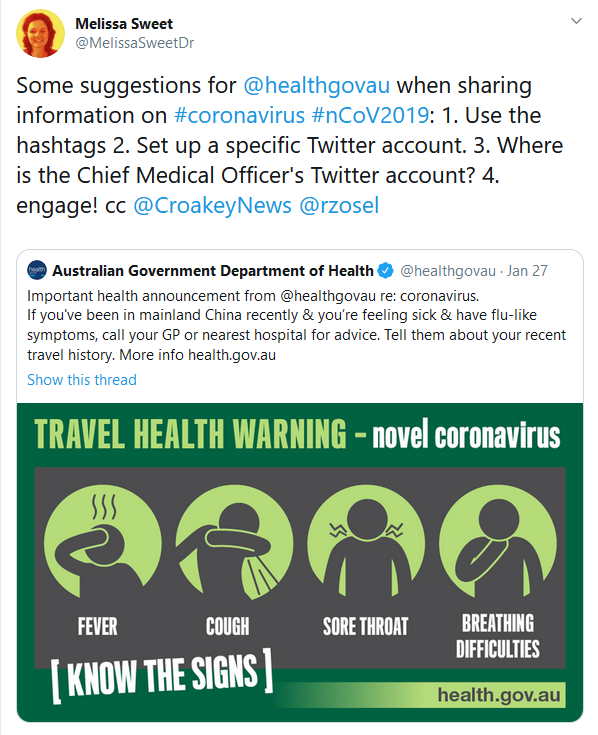 One issue that all health experts appear to agree on is that Australia is in a better position to deal with the outbreak than most countries, with world class testing procedures, clinicians and health services.

AHHA’s Alison Verhoeven described public hospitals as having “proven facilities and expertise in supporting people at risk or diagnosed with pandemic-type illnesses while protecting the general population”.  She added that dealing with the current novel coronavirus issue will further build public hospital expertise and experience.

Australia’s success in copying the coronavirus also demonstrates our expertise in this aspect of our nCOV response. 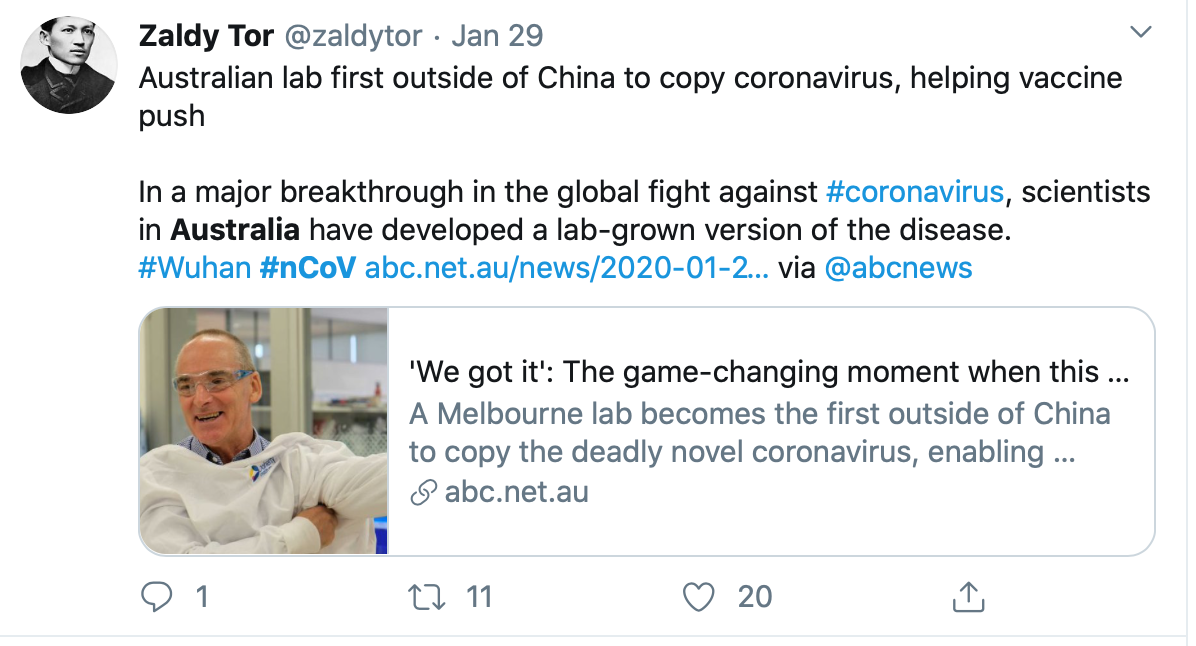 Another area of agreement among stakeholders is the importance of learning from our response to nCoV in order to improve our ability to manage and contain future outbreaks of infectious diseases.

There is a general view among experts that future epidemics and pandemics are inevitable and that globalisation and the increased movement of people across countries will mean that future infectious diseases are likely to spread faster.

ASPI has identified the need for improvement in Australia’s airports and immigration systems, to provide more effective monitoring of passengers to enable the movement of large groups of travellers, such as students, athletes, convention delegates or tourists.

The AHHA has identified two specific areas in which we can strengthen our efforts:

In calling for governments and the health professions to learn from the coronavirus experience, Verhoeven has noted the broad and long-term implications of public health disasters and the role of the health system at all stages.

“We need to understand how the health system operates, or has the capacity to operate, in preventing, preparing for, responding to and recovering from such adversities,” she said.

(Editor’s note: We apologise that the original version of this story inadvertently did not attribute the quote from Professor Glynn Kelly to this article at newsGP.)