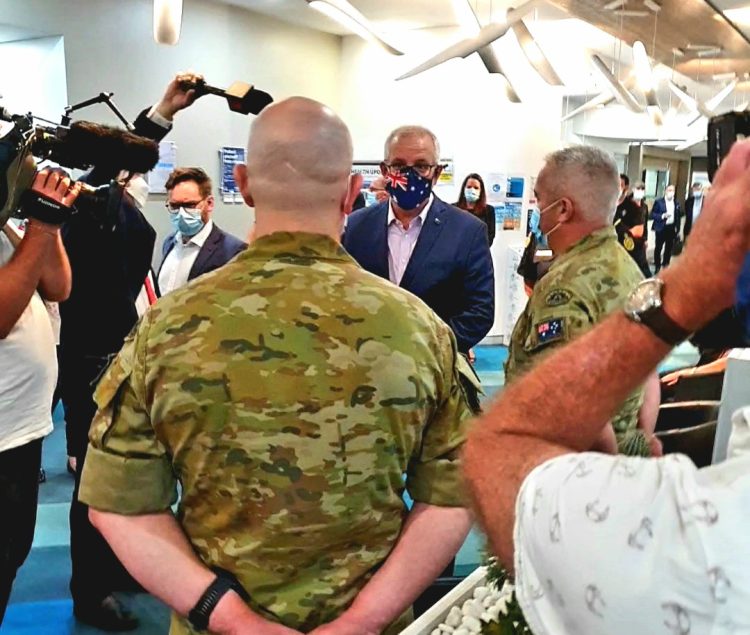 Introduction by Croakey: With more than half of Australia’s population under some form of lockdown in a bid to quell a growing multi-state Dela variant-drive outbreak of COVID-19, the nation’s vaccination program has come under heavy scrutiny.

Announcing a new snap lockdown of the state of Victoria, just one week after previous controls were lifted, Premier Dan Andrews said vaccinating a majority of the population was the only true path out of a cycle of stay at home orders.

The Federal Government released modeling from the Doherty Institute this week showing that young adults were driving the current outbreak and should be prioritised for immunisation, with 70 percent of the population needing to be covered before a new phase of easing could be considered. On the current trajectory, Doherty suggests this could be possible by November.

In this piece first published at The Conversation, Associate Professor Lesley Russell of the University of Sydney’s Menzies Centre for Health Policy and a columnist at Croakey, takes a closer look at the government’s plan, asking whether it is too little, too late.

Six months after the prime minister received his first jab, Australia finally has a national plan to roll out COVID vaccines.

The plan’s goals, set out in the Operation COVID Shield document released this week, are to ensure public confidence in the vaccine rollout and to get as many Australians as possible vaccinated as early as possible.

The plan looks to reach the vaccination targets set out in modelling from the Doherty Institute and announced after national cabinet.

That would aim to have 80% of eligible Australians fully vaccinated by the end of the year. This figure has been criticised by some experts as too low. On this basis alone the plan is short-term and arguably short-sighted.

Media reports about the plan have so far focused on the prospect of drive-through vaccination clinics, incentives to vaccinate and the possible enrolment of dentists, midwives and physiotherapists to help vaccinate.

But, as the plan admits, there is no exhaustive detail for any of these initiatives, and in particular for how to reach the vaccination target. And any substance competes with jargon and sloganeering.

At best this is an optimistic vision for an improved vaccination rollout that fails to acknowledge and fully address the errors of the past.

The man in charge, Lieutenant General John Frewen, says: “Mathematically, we can get there.”

The plan proposes three key elements for achieving its vision — coordinate, motivate and deliver — each of which comes with inherent problems.

Ramping up the vaccination rollout will require an unprecedented level of collaboration between the Commonwealth and the states, and with other stakeholders. That’s a no-brainer.

But national cabinet has only agreed “in principal” to the prime minister’s plans, with more work to be done. If state and territory governments are not fully on board, then national coordination is impossible.

Positive public sentiment and the willingness of Australians to get vaccinated are seen as the “centre of gravity”.

The plan defines this as “the primary entity that possesses the inherent capability to achieve the desired end state” for the plan. This language is a direct steal from the Australian Defence Glossary.

The key new element in this section is setting up an “industry liaison cell” to coordinate messaging and to work with business.

Arguably the real centre of gravity of the plan must be the ability to deliver vaccinations at times and locations that ensure jabs in people’s arms. If these commitments are not met, the “positive public sentiments” seen as so crucial to the “motivate” part of the plan will quickly become negative.

These assumptions include the willingness of Pfizer to bring forward supplies and the Therapeutic Goods Administration’s timely approval of the Moderna vaccine.

There is no explanation of how and why the vaccine numbers differ from an earlier vaccination allocations document in June.

Read more:
Here are 9 ways we can make it easier for Australians to get the COVID-19 vaccine

The most striking feature of the plan is the array of new structures it imposes, such as new committees or “cells”. These are on top of the complicated array that already exists and the many stakeholders.

Frewen is the coordinator general of the National COVID Vaccine Taskforce, known as Operation COVID Shield. But there are many other hands on the tiller. He reports to the prime minister, the health minister, cabinet and the national cabinet. He must also work in partnership with the states and territories.

The taskforce now has streams to coordinate, motivate and deliver. It also oversees an “assessments cell”, which will analyse data and track progress of the vaccine rollout against targets.

There will also be a new “program governance committee” to oversee and advise the taskforce on managing key (unspecified) risks and achieving outcomes.

Then there are business stakeholders who will be looked after by the already mentioned new “industry liaison cell”.

This interesting addition will coordinate the allocation of vaccines to approved business partners, drive how businesses communicate about vaccination, and facilitate policy discussions relating to issues business raises.

This could help efficiently drive vaccinations in the workplace. But it’s easy to see how disruptive this could be if industry voices and needs are privileged over those of communities that may not have the government’s ear.

Read more:
We’re paying companies millions to roll out COVID vaccines. But we’re not getting enough bang for our buck

The first is the deliberate decision that a number of vulnerable population groups — including community carers, people in mental health facilities and immigration detention, the homeless and prisoners — are not included in this plan and responsibilities for their vaccinations will be left to current jurisdictions. This is unfair and untenable.

The second is the lack of insight into what has gone wrong with the vaccine rollout to date.

Ultimately, the only way to know if this military-style campaign plan will fight the pandemic war and defeat the coronavirus enemy is to marshal the troops, invoke a national call to arms, and begin the battle, adjusting the battle plan as needed.

Read more:
Calling in the army for the vaccine rollout and every other emergency shows how ill-prepared we are