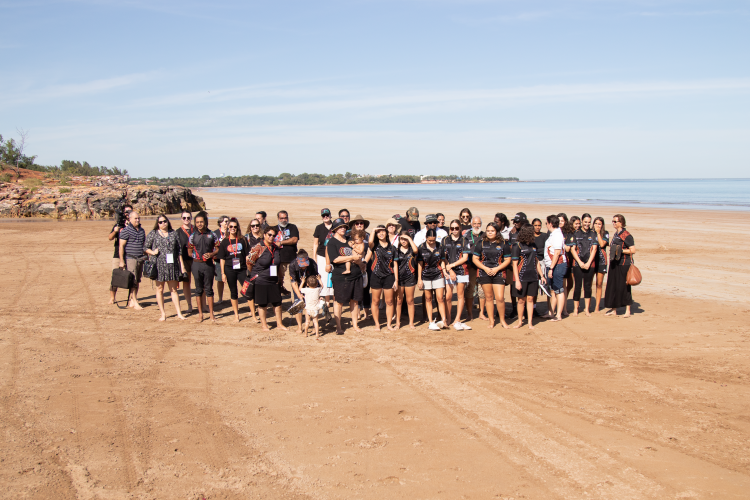 For Aboriginal and Torres Strait Islander nurses and midwives, getting together on Larrakia Country in Darwin this week has been an opportunity to celebrate their connections, strengths, leadership and amazing work, reports Dr Tim Senior for the Croakey Conference News Service.

It was the second event in the Congress of Aboriginal and Torres Strait Islander Nurses and Midwives (CATSINaM) national conference series, which opened with a two-day meeting on Yirrganydji and Yidinji Country in Cairns.

The CATSINaM Conference 2021 continued its tour of the continent known as Australia this week, meeting on Larrakia Country, in Darwin. At each new venue, the coolamon from the guardians of the Tent Embassy in Canberra is being passed on. Richard Fejo, Larrakia Traditional Owner, and well known in the top end health sector as an award-winning cultural educator and stand-up comedian, received the coolamon and gave the Welcome to Country.

CATSINaM Board member Karita McCarthy is a Waanyi and Tagalaka Nation woman who grew up in Darwin. McCarthy was a speaker on two separate panels in the conference program involving Graduate supports and Eldership and Leadership. She lists her pathways through various qualifications:

My career in health started in 1998. I was an Aboriginal mental health worker to start.

I did a graduate certificate in social and behavioural health and then I did a Diploma in Primary Healthcare specialising in mental health.

I then did a diploma in Business Administration. I commenced a diploma in alcohol and other drugs, which I didn’t finish, because I thought at this point, we didn’t have enough qualifications to be a doctor, but not actually be able to get anywhere with any of the qualifications.

So, I bit the bullet after a long time and became a registered nurse.”

Having navigated through her learning journey, McCarthy is clear in the message she wanted to give at the conference.

“The biggest thing with me was that I felt really alone,” she says.

“It was really hard to find any other nurses and midwives who were going through all the things that I was going through. I’m really hoping to get out there all of the organisation and businesses and support – that people don’t have to feel alone.”

McCarthy discusses the importance of scholarships in gaining these qualifications: “Probably one of the hardest things with any kind of study is all the unpaid placements. You’ve got all the bills and the credit cards and the loans that you probably don’t have when you’re young. I knew that I had to find every scholarship I could get my hands on and apply for everything.”

Financial support through study is vital. McCarthy lists the Puggy Hunter Memorial Scholarship, the Mediserv Indigenous Scholarship, and the NAIDOC Scholar of the Year award in 2018 as being especially important.

Support from the NT Department of Health was also vital, in providing a flexible Patient Care Assistant position that would fit in with her studies. Supporting nursing students in writing effective applications for scholarships, is one way McCarthy hopes she can assist.

McCarthy’s clinic experience is far and wide, including psychiatric nursing, renal nursing and palliative care. She also works with the NT Department of Health and the NT Primary Health N, and is keen to see more Indigenous nurses working in primary care and in the hospital system throughout the Northern Territory. “At the moment there’s not really a path for Indigenous nurses to be able to get into remote areas, or even to get into renal dialysis.”

McCarthy talks with real excitement about a young Indigenous nurse coming though in psychiatric nursing. The same excitement is there, however, in the opportunity to meet one of her heroes.

“We were so lucky to find Professor MaryAnn Bin-Sallik to be the key-note speaker at the dinner. She’s one of the most amazing women. There’s a chapter on her in the CATSINaM Indigenous nursing book written by our founder. I’ve always hung on to this book thinking about what it would have been like in the 1970s and 80s, especially being Indigenous. People talk about this legend. I’m very, very honoured to have this lady being part of our conference.”

For McCarthy the CATSINaM conference is family. “That’s the luckiest thing for Indigenous people with cultural kinship and our connections that we don’t actually have to be related to somebody. Being in the nursing world, we are family, and we do call each other brother and sister.”

One of the keynote speakers at the Darwin conference, Deputy CEO of the Healing Foundation Donna Burns reflects on being at the Cairns meeting last week.

She says: “It was a trip down memory lane – seeing nurses and midwives who, over the last 50 years have put their heart and soul into making change, and have shown such resilience and dignity and a level of intellect. It was really moving to see these women who have never given up. They did not throw in the towel at any point, despite it being ridiculously hard.”

Burns, a Wiradjuri woman, was an emergency clinical nurse specialist and says: “The work we do is about changing systems”. This is why she now works with the Healing Foundation.

Burns is clear about the message in her keynote speech. “I’d like to share with the audience, just understanding trauma, because it’s really the trauma where healing is and what that means for clinicians and how we can do it as individuals. But to get an organisational shift, we need leaders to be brave, strong and kind.”

Kindness as an essential part of leadership is not a theme regularly mentioned among non-Indigenous leaders. “For this kind of leadership, people really have to connect to being kind because you have to be kind and strong. And it takes a level of kindness, I think, to understand trauma, and the impact that presents to us now, as clinicians.”

Just understanding the place of trauma that people come from and impacts on presentations and behaviour.

We have to implement trauma healing informed practice where we focus more on equity rather than equality. It’s okay to triage someone differently because of their all of the trauma.

I went into organisational change and programs where we were treating focused on better outcomes for patients as far as experience rather than clinically, because we knew that if they had a better experience, they would have a better clinical outcome.”

Burns sees CATSINaM having a unique position in pushing for systemic change. “What they do is present an understanding that mainstream organisations literally do not have. People are shifted by a story and they’re shifted by truth and truth changes of hearts and minds. And these organisations can share the truth, because they know, they’ve got lived experiences. They’re committed. And then by sharing the truth, people will listen.”

Burns gives a real-life experience that contextualises the issue. “I can remember, being in the ED [Emergency Department] one day and having a hand over where someone would say chest pain bed 3, appendix bed 4, Aboriginal man bed 6. Hey, why was that the defining feature, referred to as their Aboriginality, rather than the reason for admission.”

Another story she tells of someone sitting down for a yarn with a prisoner and then “was held to account for that behaviour, telling them it was outside of current guidelines. They were reprimanded for doing something different, which is actually completely culturally appropriate.” In the clash of two cultures, the organisational culture trumps Indigenous culture.

Burns gains strength from the move away from a deficit discourse, as found at CATSINaM. “The deficit is what gets picked up in the media, but there’s a whole movement acknowledging each other for doing amazing work.”

She quotes the chair of the Stolen Generation Reference group for the Healing Foundation, Ian Hamm: “We are there to unleash the potential of First Nations people”.

And this could be what all the delegates and speakers at the CATSINaM conference are doing for each other. 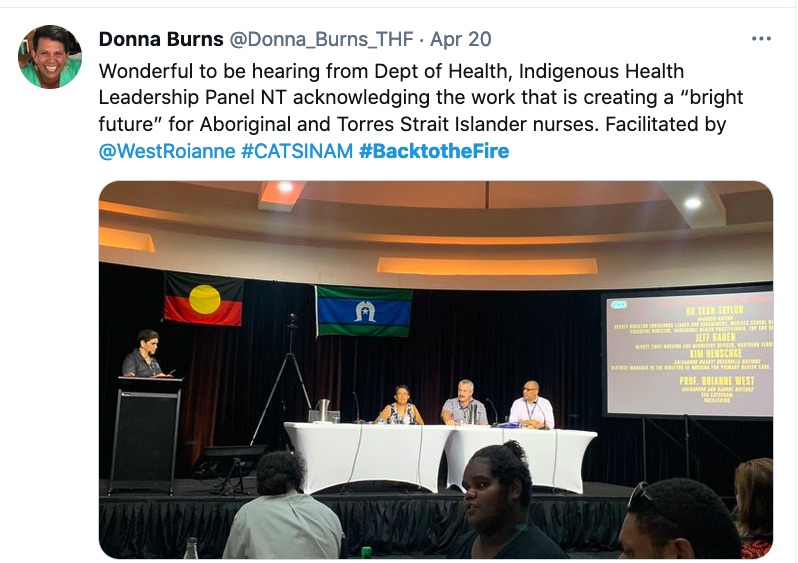 Dr Tim Senior is a GP working in Aboriginal health and a contributing editor at Croakey Health Media. 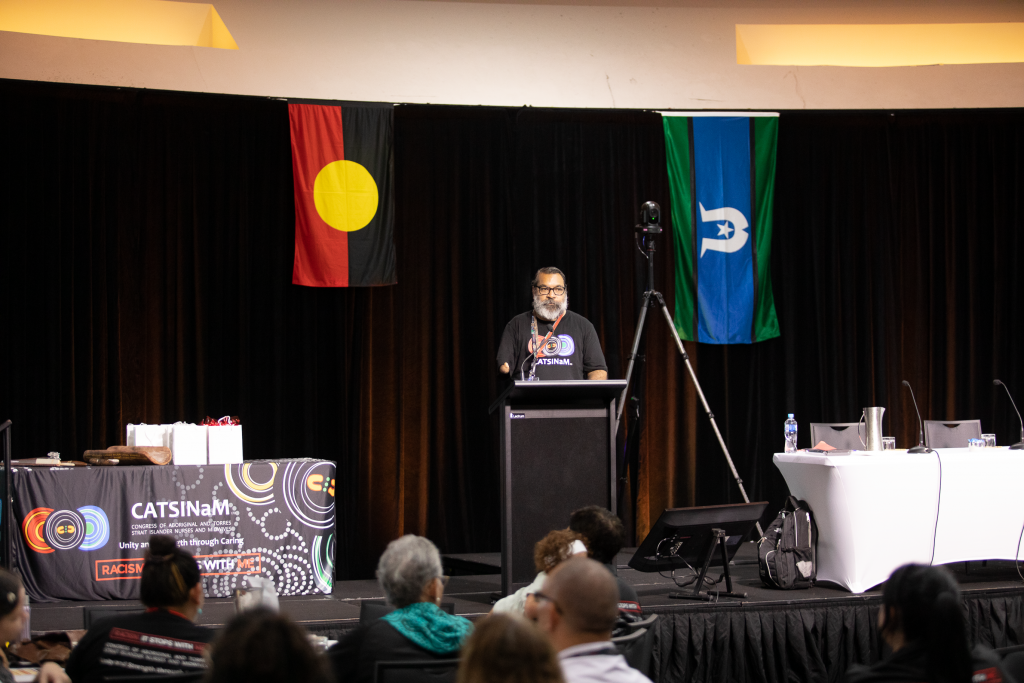 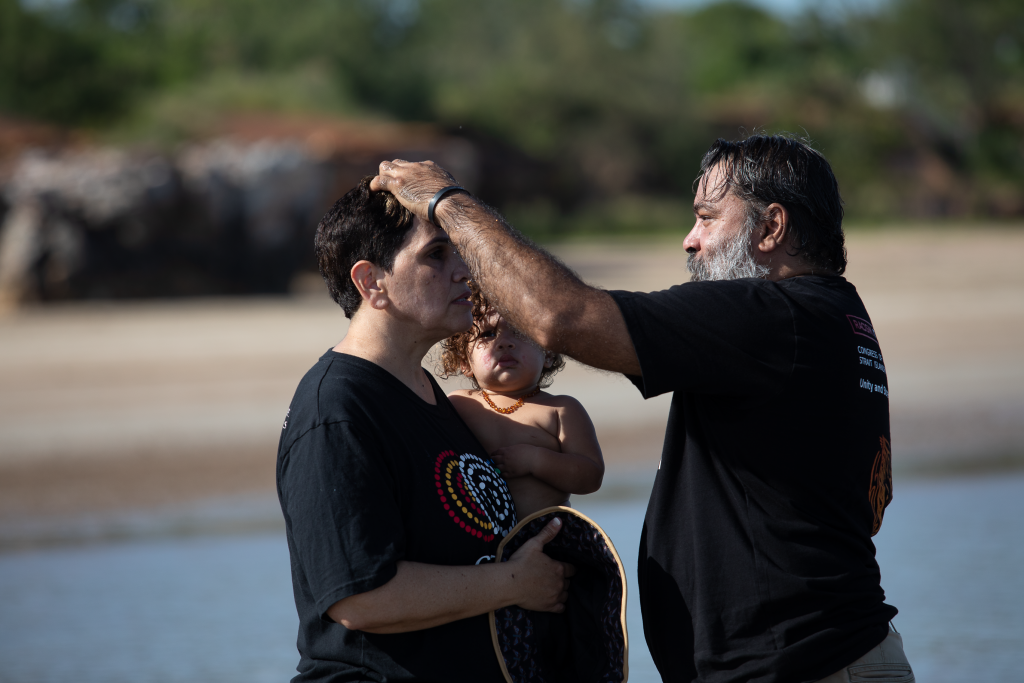 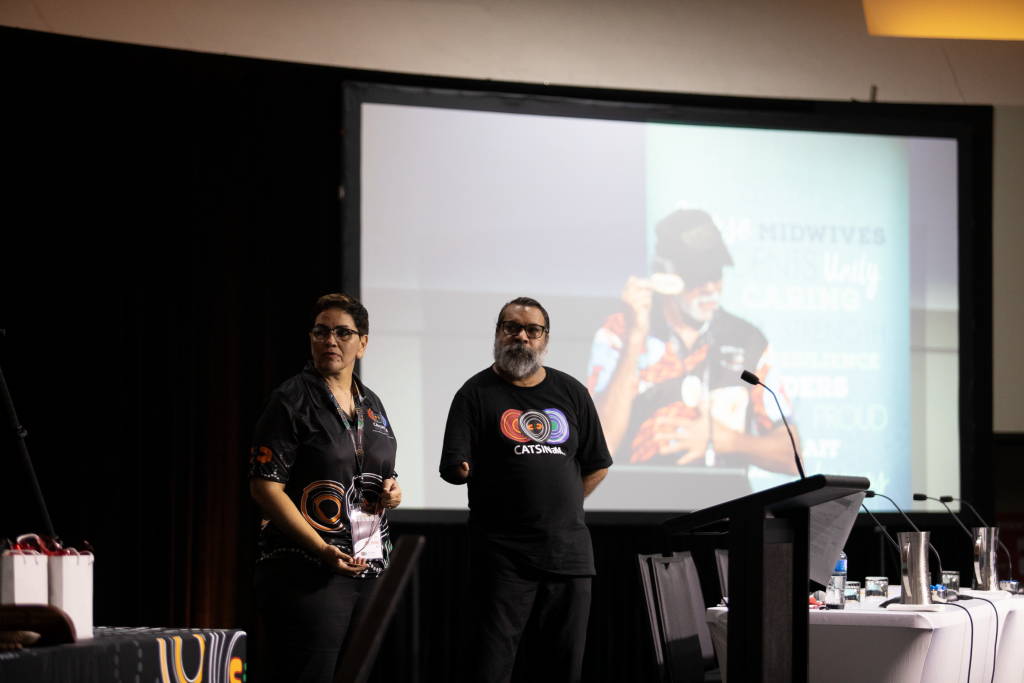 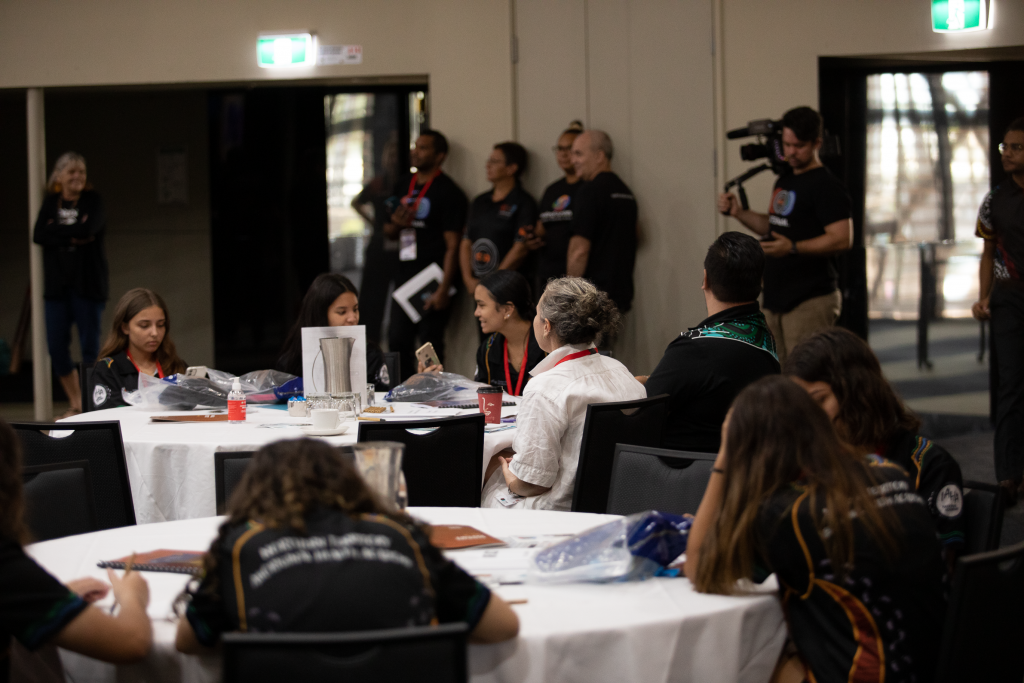 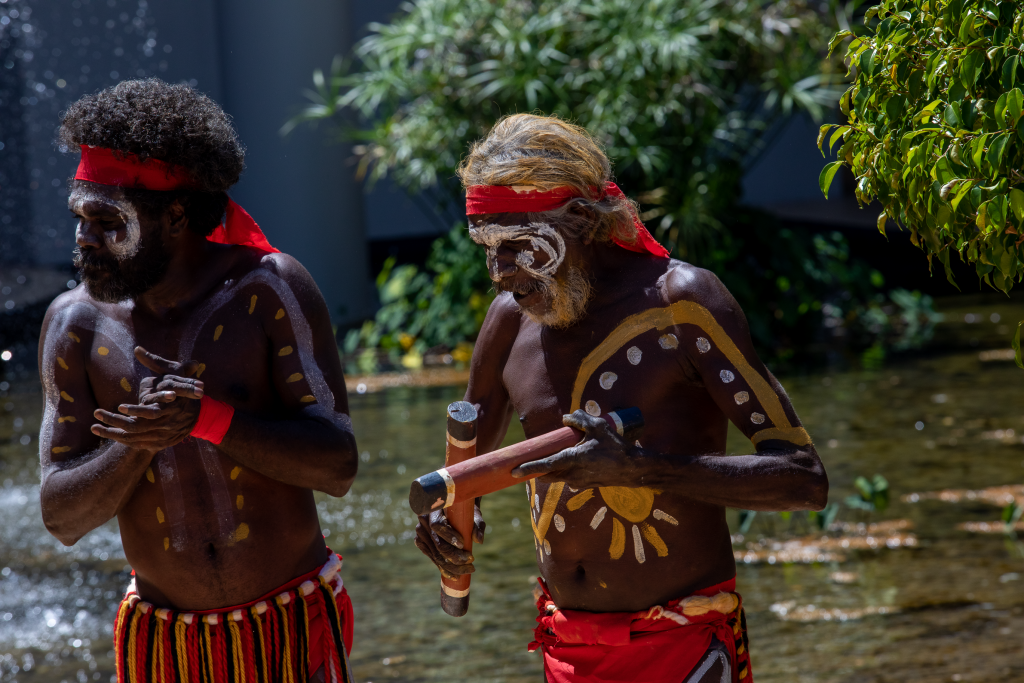 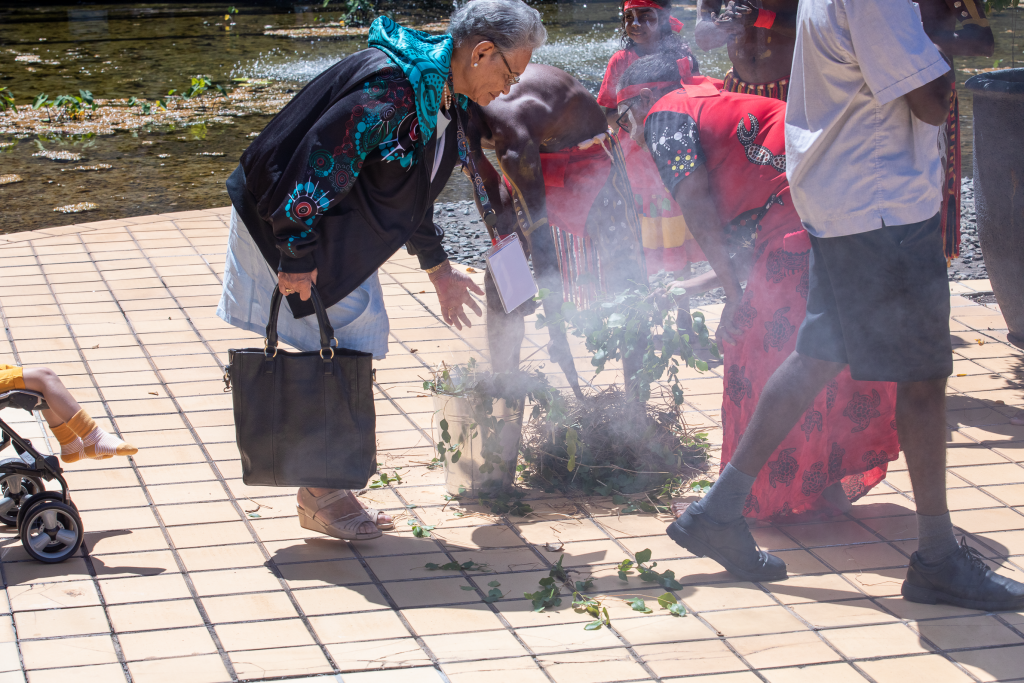 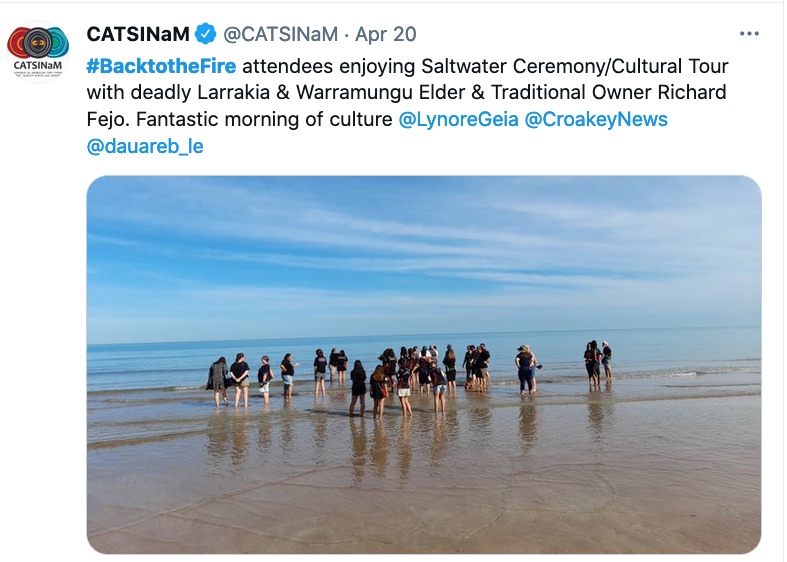 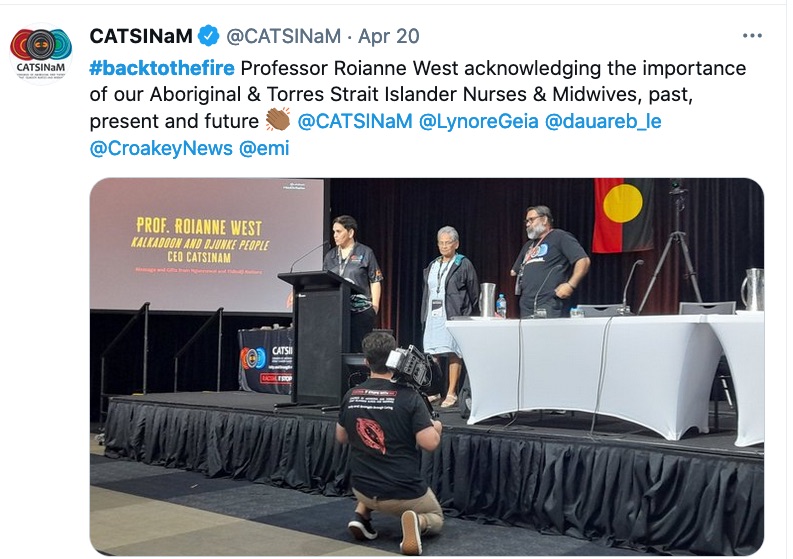 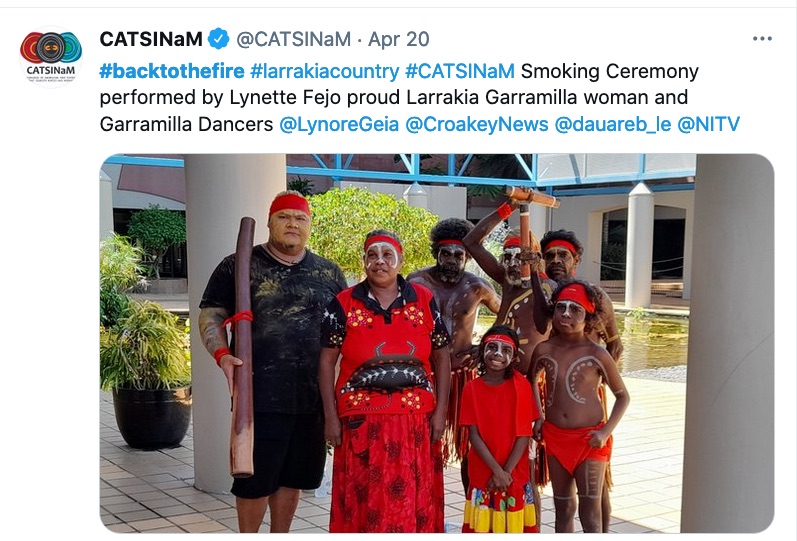 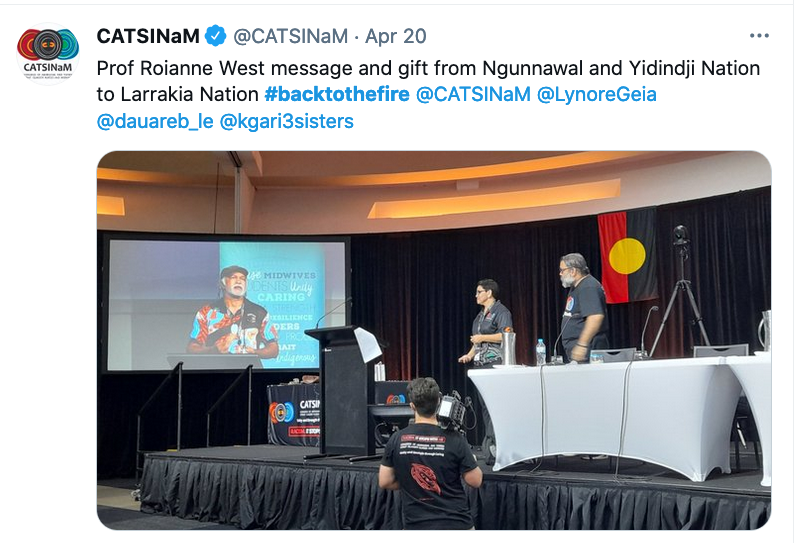 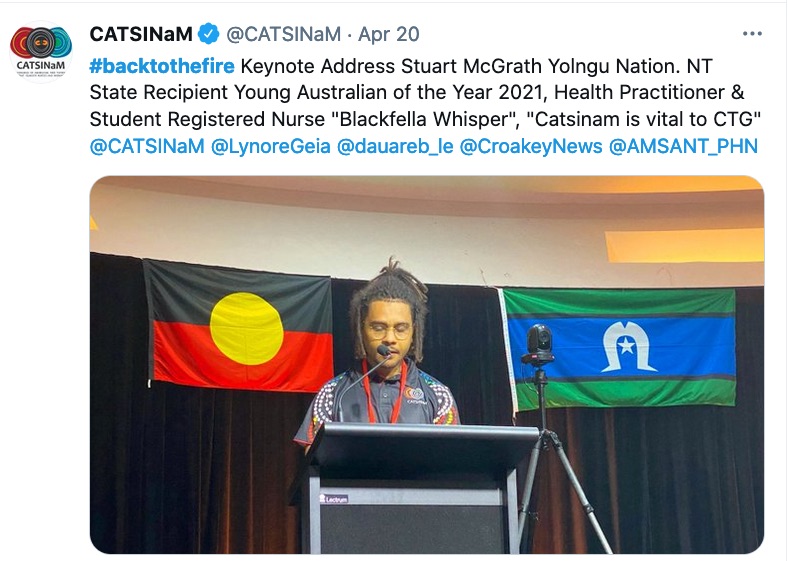 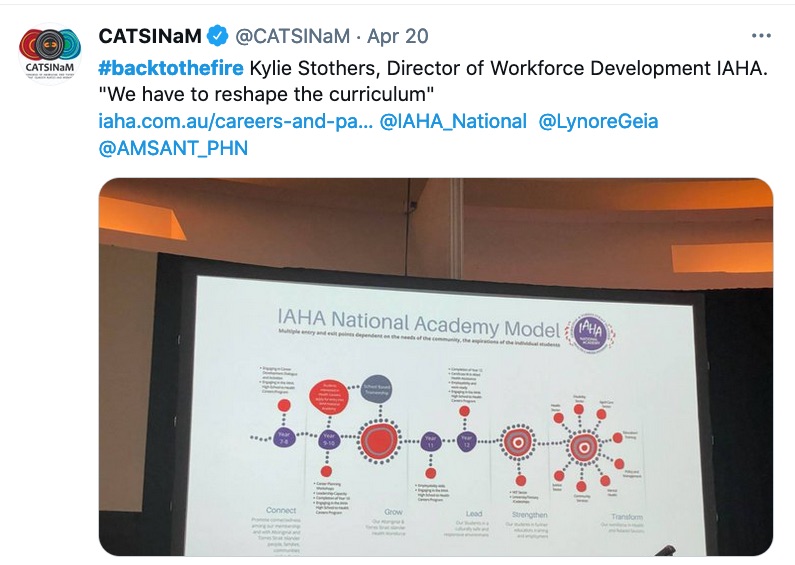 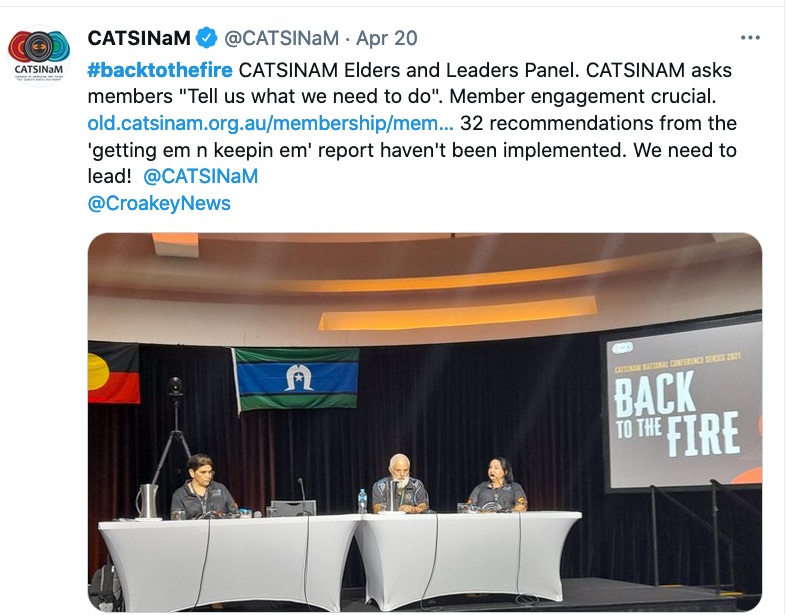 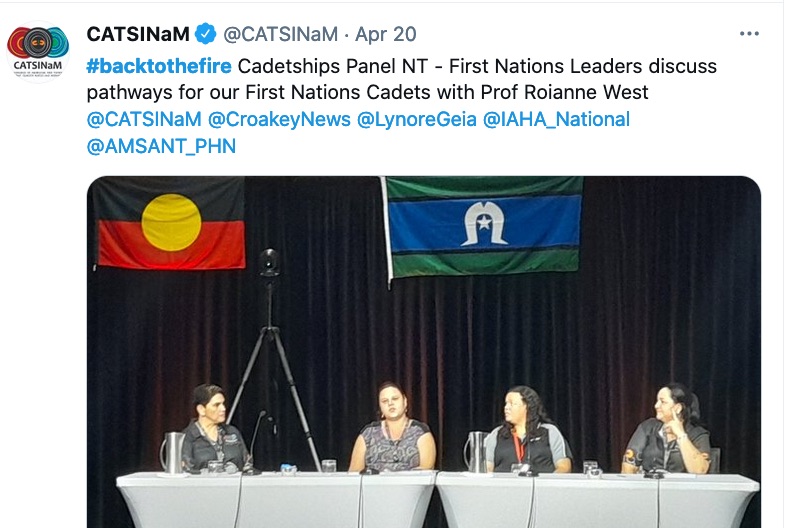 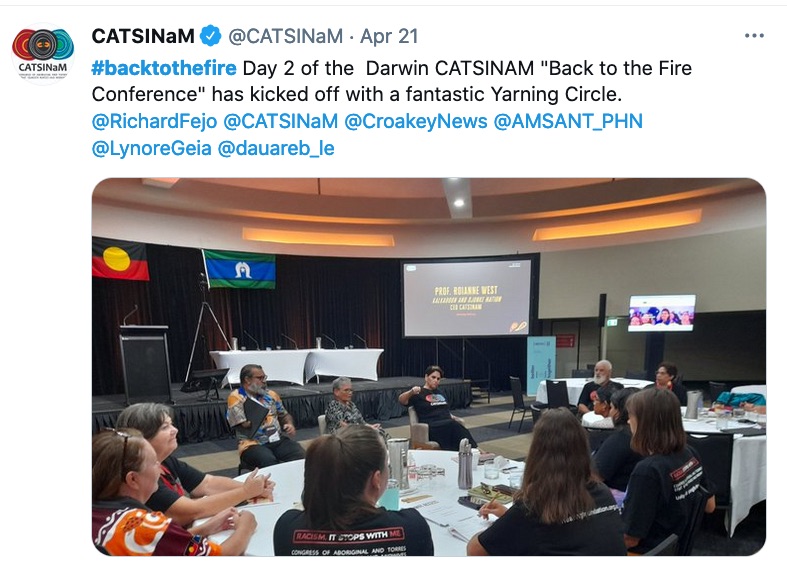 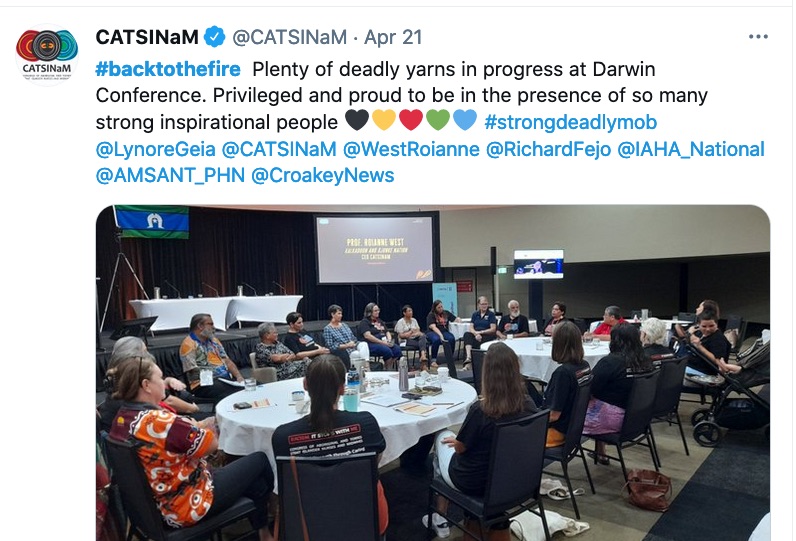 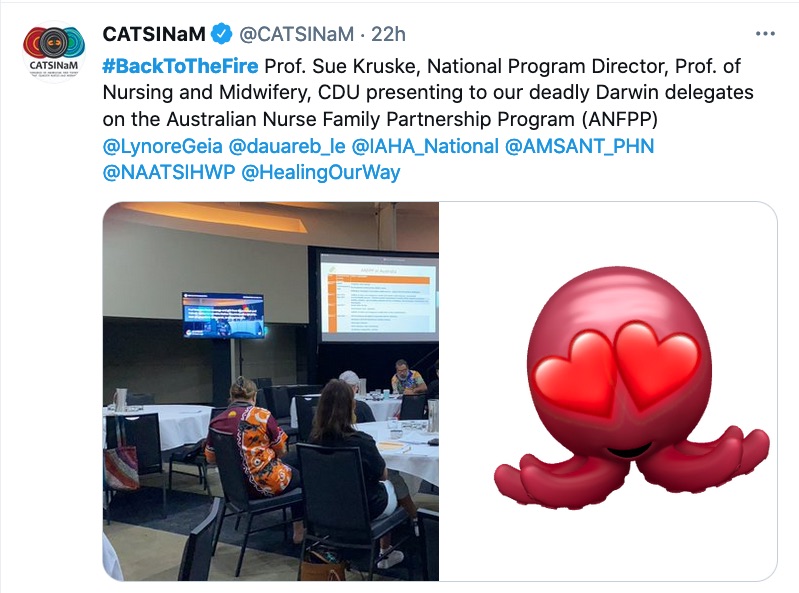 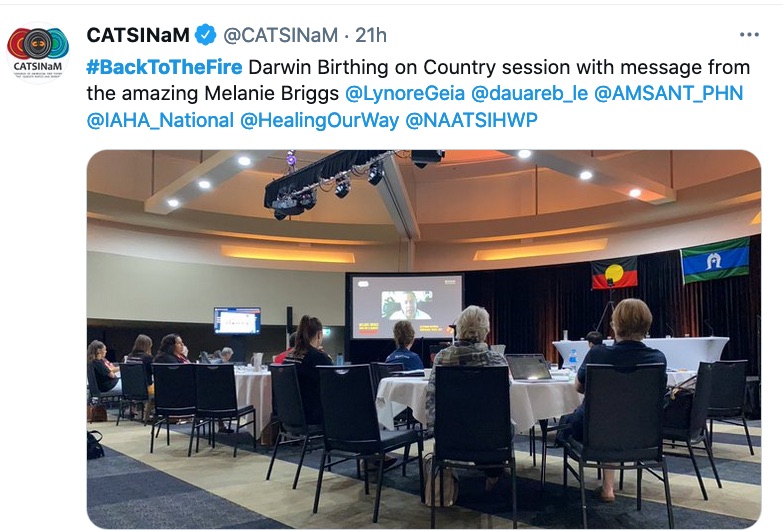 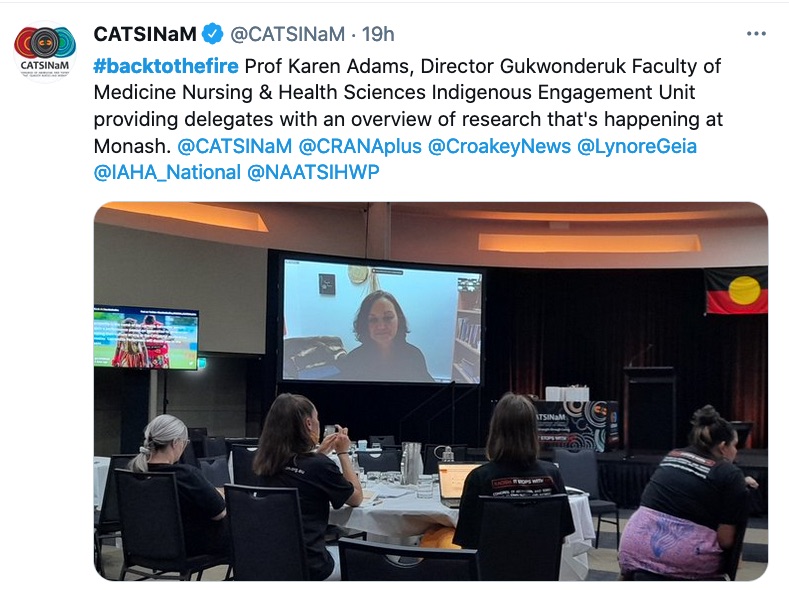 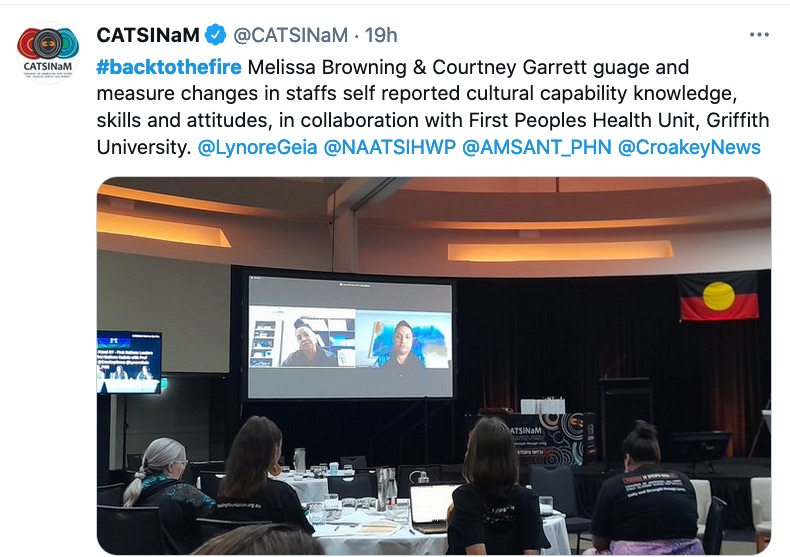 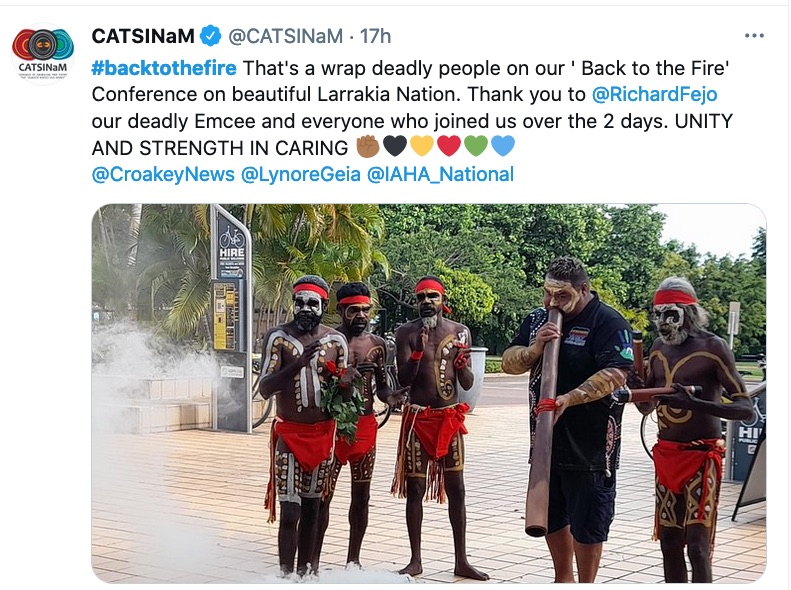 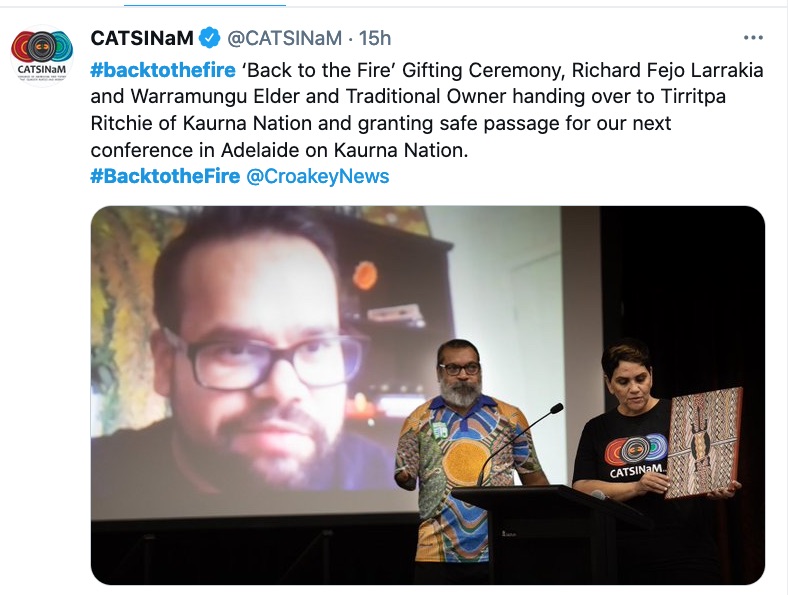 PrevPreviousAs Biden leads a global charge, Australia is lagging behind on climate action
NextCalling for a broader focus for the National Preventive Health StrategyNext