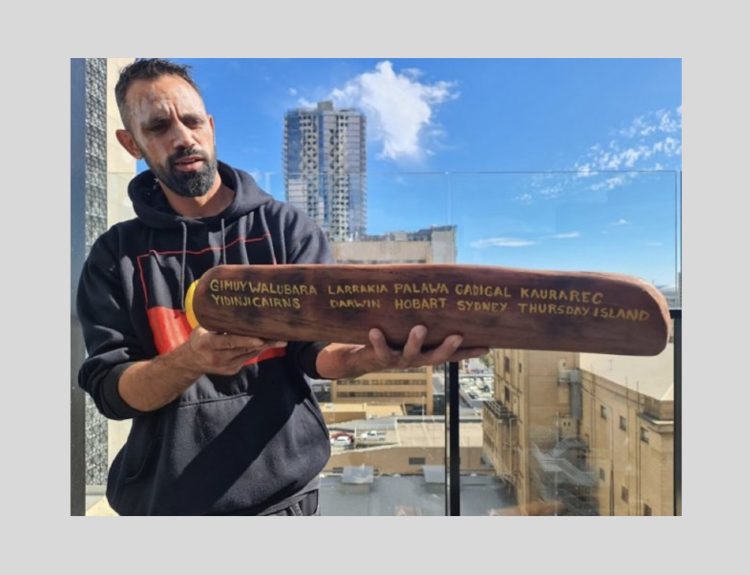 Back to the Fire in Adelaide, putting the spotlight on racism in healthcare

As Aboriginal and Torres Strait Islander nurses and midwives gathered on Kaurna country in Adelaide this week, the focus was firmly on the importance of addressing racism in healthcare, reports Dr Tim Senior for the Croakey Conference News Service.

It was the third event in the Congress of Aboriginal and Torres Strait Islander Nurses and Midwives (CATSINaM) national conference series. Read our previous articles here.

Aboriginal and Torres Strait Islander readers are warned that the following story contains the names of deceased persons.

This week the coolamon that is being passed through the CATSINaM series of conferences moved from Larrakia country to Kuarna country, Adelaide. This one-day event had a strong focus on institutional racism in the health sector. 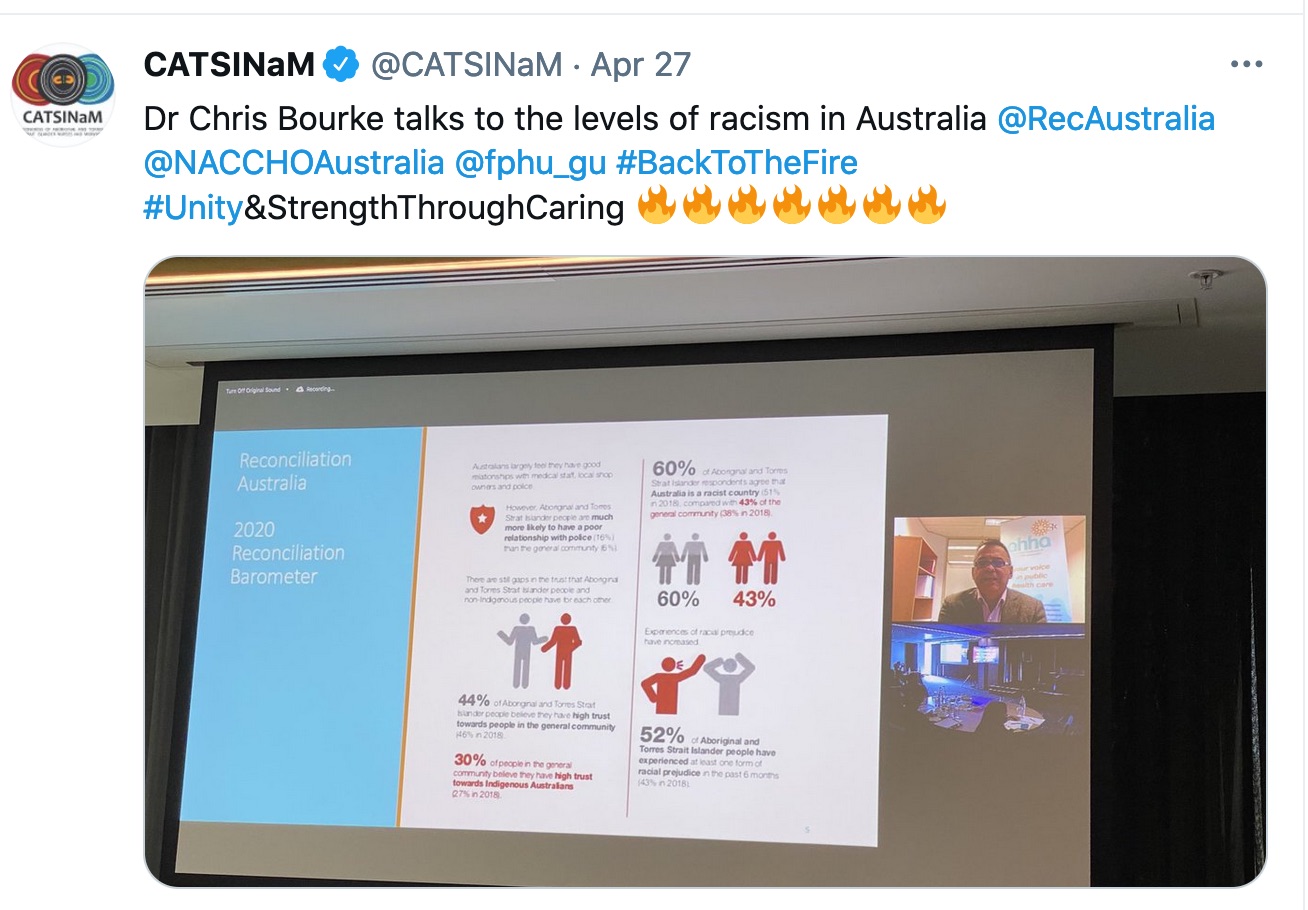 That this has been investigated in South Australia makes the Adelaide Back to the Fire conference the obvious place to talk about racism in the health sector.

This particular project resonates with Ngarrindjeri woman, Keera Laccos-Barret, and it is the presentation she has been most looking forward to within the Adelaide CATSINaM program.

Laccos-Barret has been a registered nurse for 10 years, and is currently an academic teaching staff member at the University of South Australia.

Presenting her Master’s research at the conference, Laccos-Barret asked the question; “Are Australian Universities Teaching Undergraduate Nurses to be Racist in Discrete Aboriginal and Torres Strait Islander Courses?”

The research is not yet complete; however, she is very familiar with the findings of the South Australia institutional racism audit.

Laccos-Barret has experienced racism in the care provided for herself and her family, and has witnessed racism in healthcare towards other Aboriginal and Torres Strait Islander people.

“It’s a requirement that all universities that are delivering an undergraduate nursing program are required to have a discrete Aboriginal and Torres Strait Islander health course written to CATSINaM’s adaptation of the health curriculum framework,” she says.

Laccos-Barret is examining the development of learning objectives about this compulsory part of the nursing curriculum.

Is race included in our learning objectives? Is the teaching based on deficit?

Is it othering of Aboriginal and Torres Strait Islander people?

We need more accountability with who is developing the narrative about Aboriginal and Torres Strait Islander people in nursing.

Who gets to develop the narrative about Aboriginal trauma?

What’s their understanding of their own internalized racism and systemic racism?

What’s their own awareness of their position of power in a racialised hierarchy?

I’m seeing in some of the content, that we’re enforcing racism.”

These aren’t topics that are usually considered in health curricula; however, people have been receptive.

“With the type of methodology [I’m using], it has been criticised by people who are quite quantitative. But health professionals are generally interested with the idea of racism in care. I can see that there will be traction in the future.”

Ultimately, it comes down to who is developing the curricula (and the narrative) on Aboriginal and Torres Strait Islander health.

“How can you research racism as experienced by Indigenous people, if you are not researching through an Indigenous way of being with the world and knowing?”

Laccos-Barret admits to being frustrated that she is undertaking this research, but not yet involved in developing the curricula that would help solve the problems she’s identified.

“I’m being unapologetically political with this!” she says. 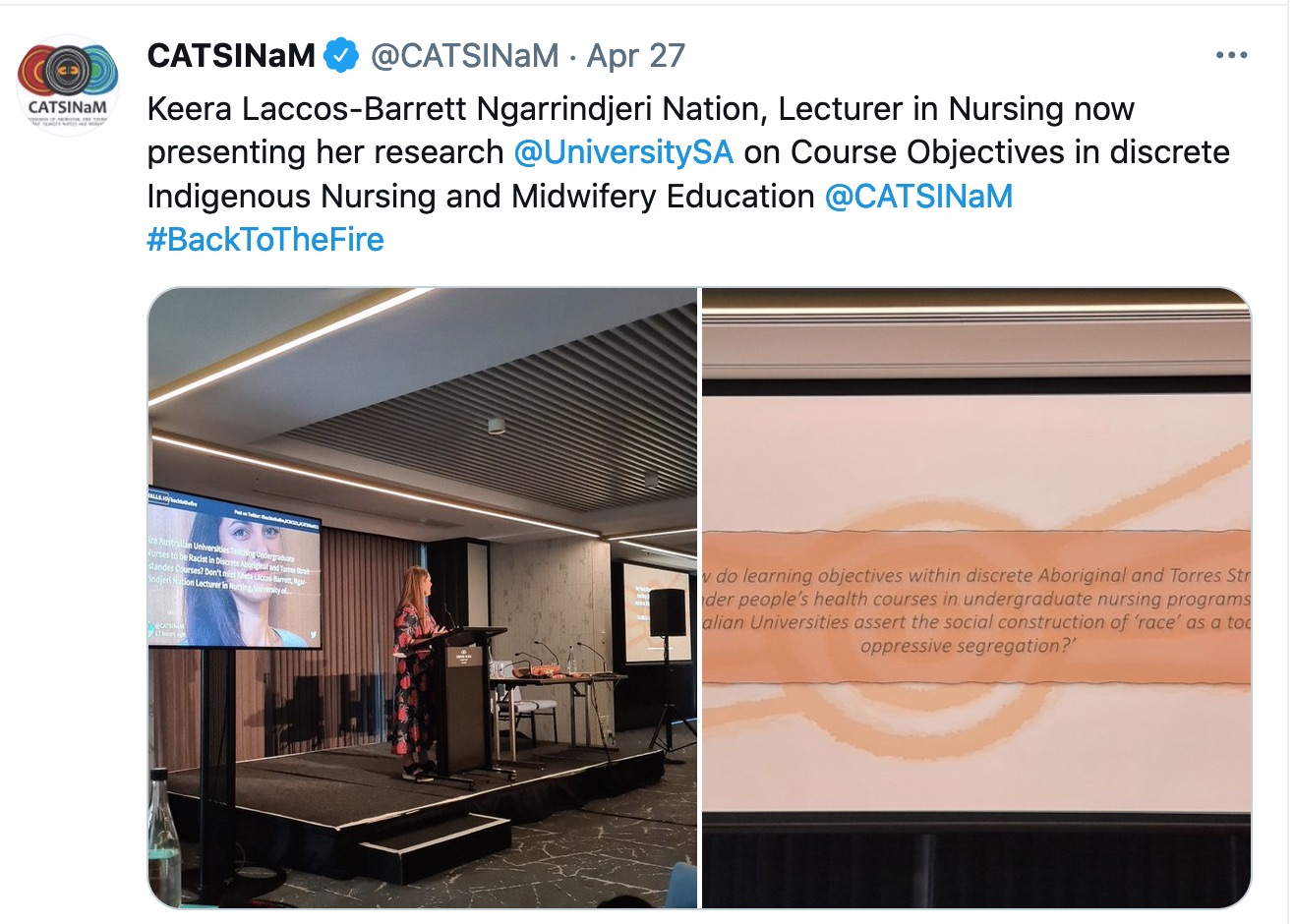 Laccos-Barret is one of the younger generation of First Nations nurses whom Dr Lynore Geia, a a Bwgcolman woman from Palm Island, was most looking forward to hearing from at this event. “I’m close to retirement,” she says.

Geia grew up influenced by parents who were strong social justice advocates on Palm Island, and her experience and identity have been profoundly influenced by the racist policy experienced there.

Qualifying as a nurse in 1977, Geia then engaged in midwifery training in Lewisham, England.

“In England I was working with so many black midwives,” she says. “They were midwives from the West Indies, British Guyana, from Africa. All my seniors were all black midwives. It was the total opposite of Australia.”

During the 80s in Queensland, while some racist policies were being dismantled, the practices that they had described continued.

It didn’t only affect communities, it also affected the ways Geia, as an Indigenous nurse, was treated, at one point being threatened by the matron with being shipped on the boat back to Palm Island – a threat with particular historical overtones for that communit

After a period of time working as a remote area nurse in the APY lands in central desert Australia – “working in a different country in the same country” – Geia returned to Palm Island.

During this time there were deaths of Aboriginal and Torres Strait Islander people in custody, including the well-known death of Mulrunji Doomadgee, which sparked a community uprising and national outrage.

When the Black Lives Matter protests were further ignited by the murder of George Floyd in the United States, Geia felt the similarities. “That resounded so deep within me,” she says.

“It was something so personal and so profound. Even though he was an American citizen, as a black Australian, that violence that was perpetrated on him, it echoed, right across from America to Australia.”

It left Geia to question, “Do our lives matter?”

She started thinking about writing a call to action for Australian nursing. The statement that eventuated was signed by 116 nurses, and sets out four principles for action:-

The identity of Geia, as an Indigenous midwife, and her lived experience of systems and practices are closely intertwined, in a way that demonstrates how important the Black Lives Matter movement is to improving health systems for Aboriginal and Torres Strait Islander people.

“As an Aboriginal person, I cannot stand away from that, because that’s part of my life. It’s always subjective. And it always hurts. We go through a process of healing ourselves, where you don’t forget it as much and start to address issues without protecting yourself rather than being pulled in and being hurt again. That’s the whole theme of the Black Lives Matter paper,” she says.

“Download the paper, read it, use it as a working paper in university. Look at what you can do in dismantling racism and systems of oppression in health.” 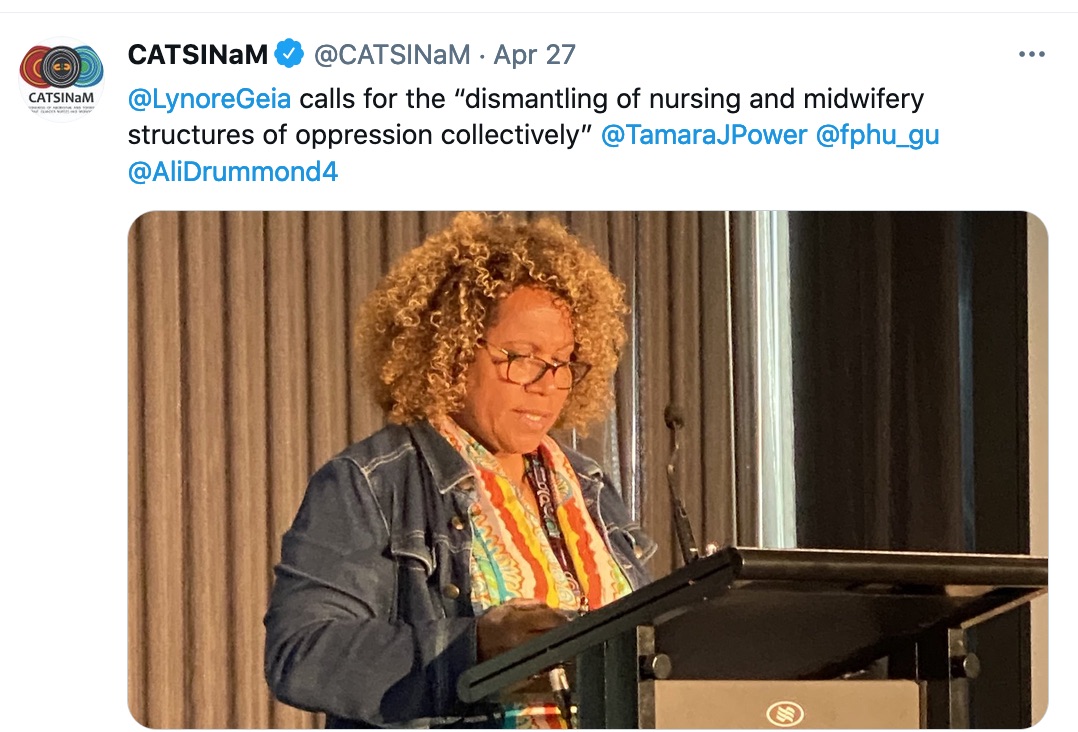 Geia is at pains to acknowledge her debts to others in this work.

“I’m very grateful being on Kuarna country,” she says.

“Everywhere I go I always imagine the First Nations people, where they would have walked and camped and lived their lives. Thank you to the Kuarna people for letting us walk here, and for bringing the CATSINaM fire to Kuarna country. I want to honour them.”

This work that we’re doing it’s not new work, we’re standing on the shoulders of giants who’ve come before us.

We’re picking up the threads and making it stronger, until it becomes a rope that doesn’t break.” 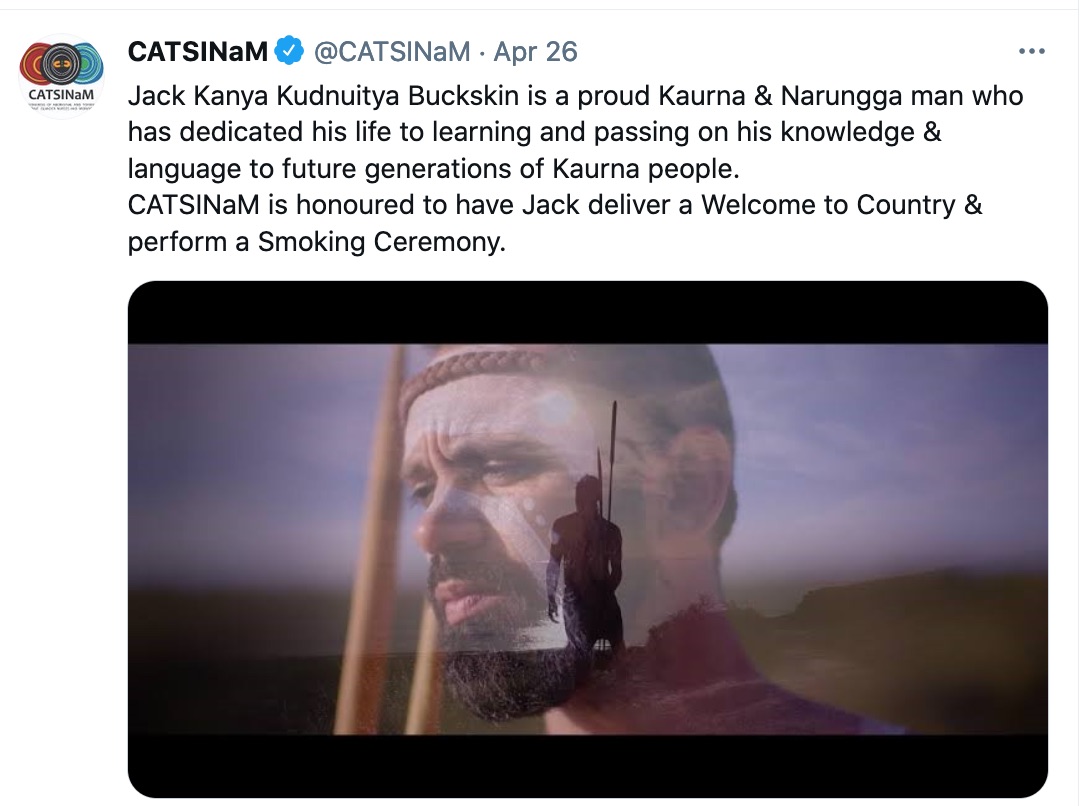 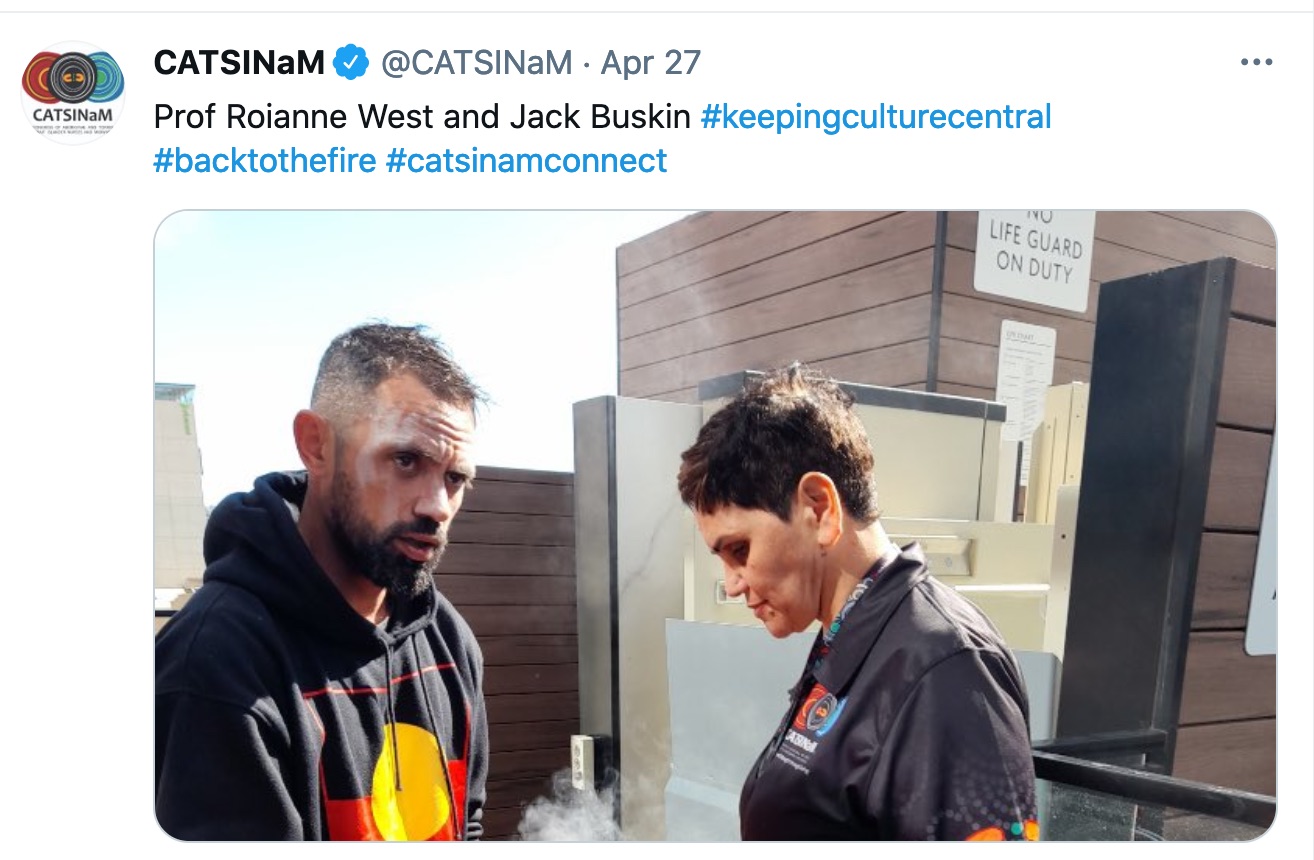 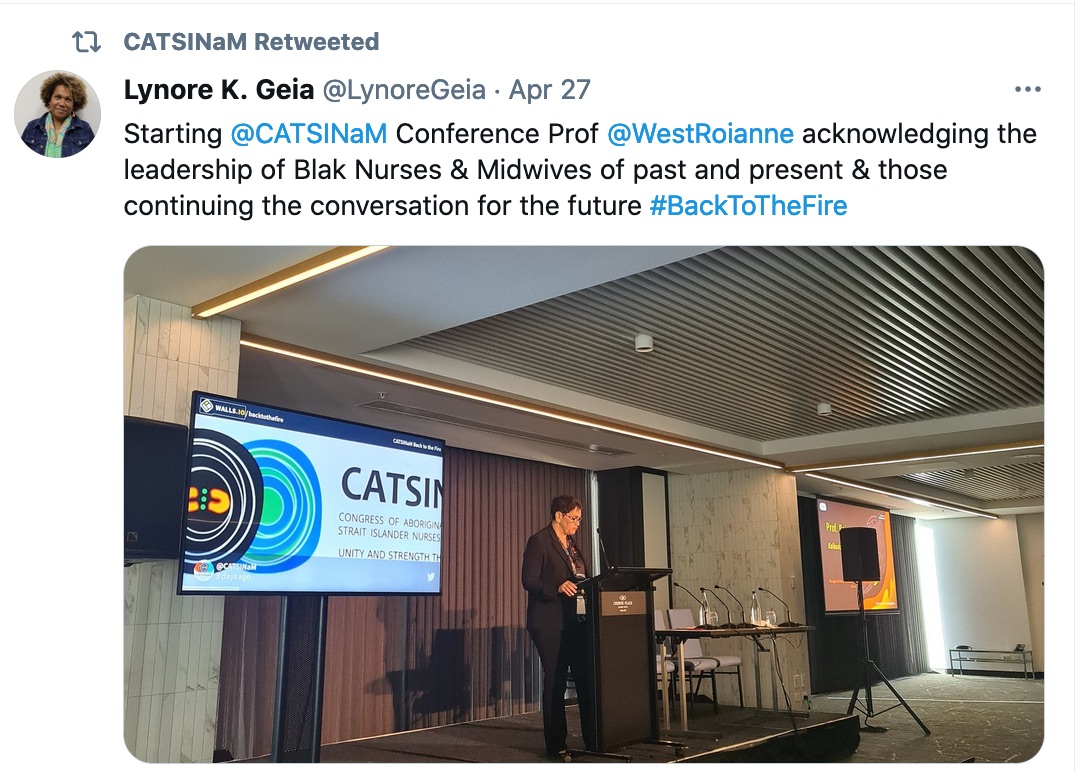 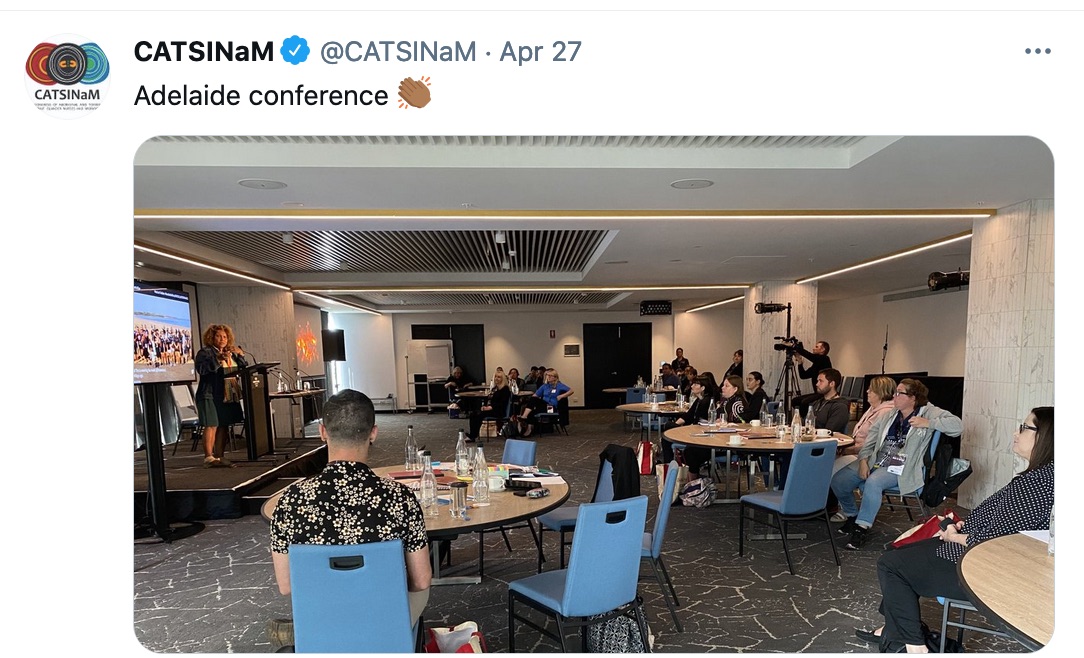 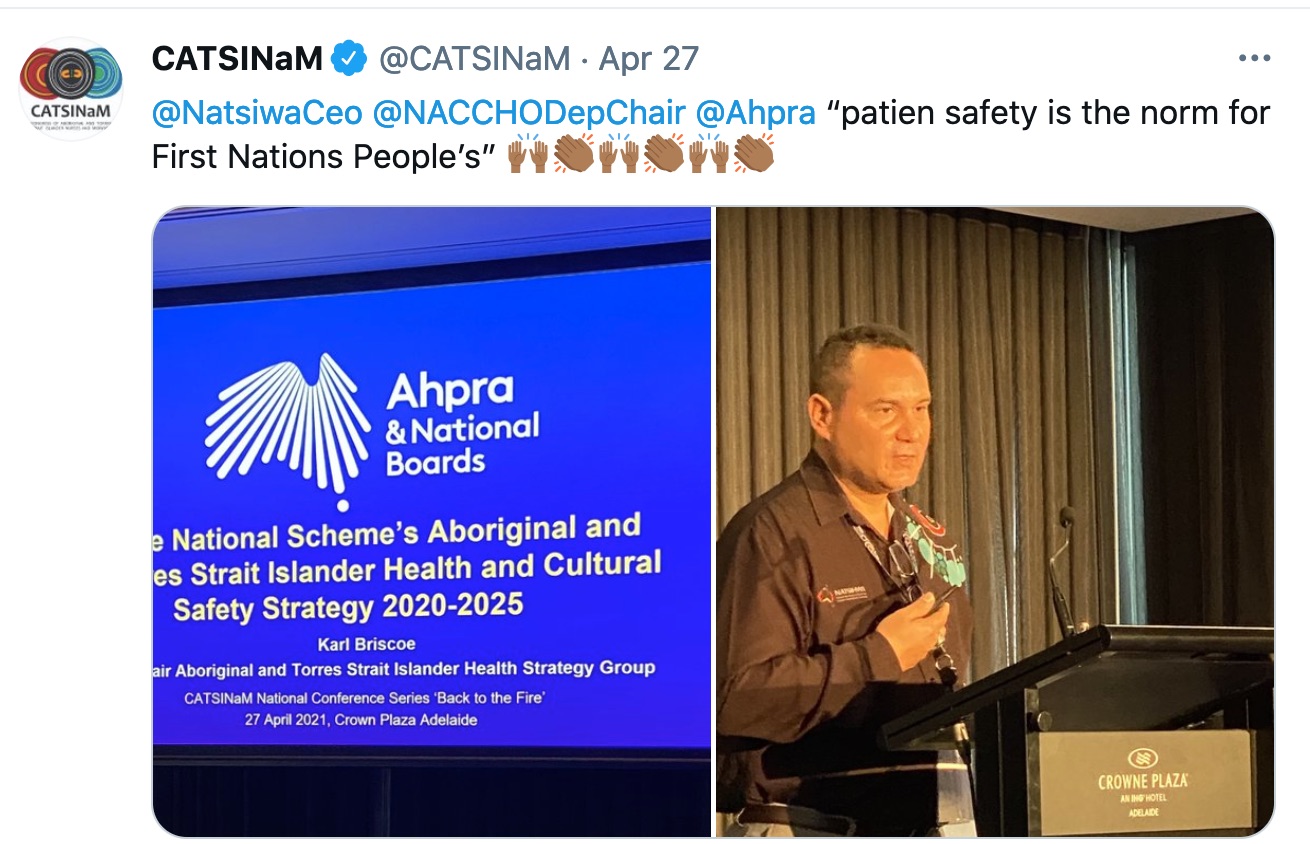 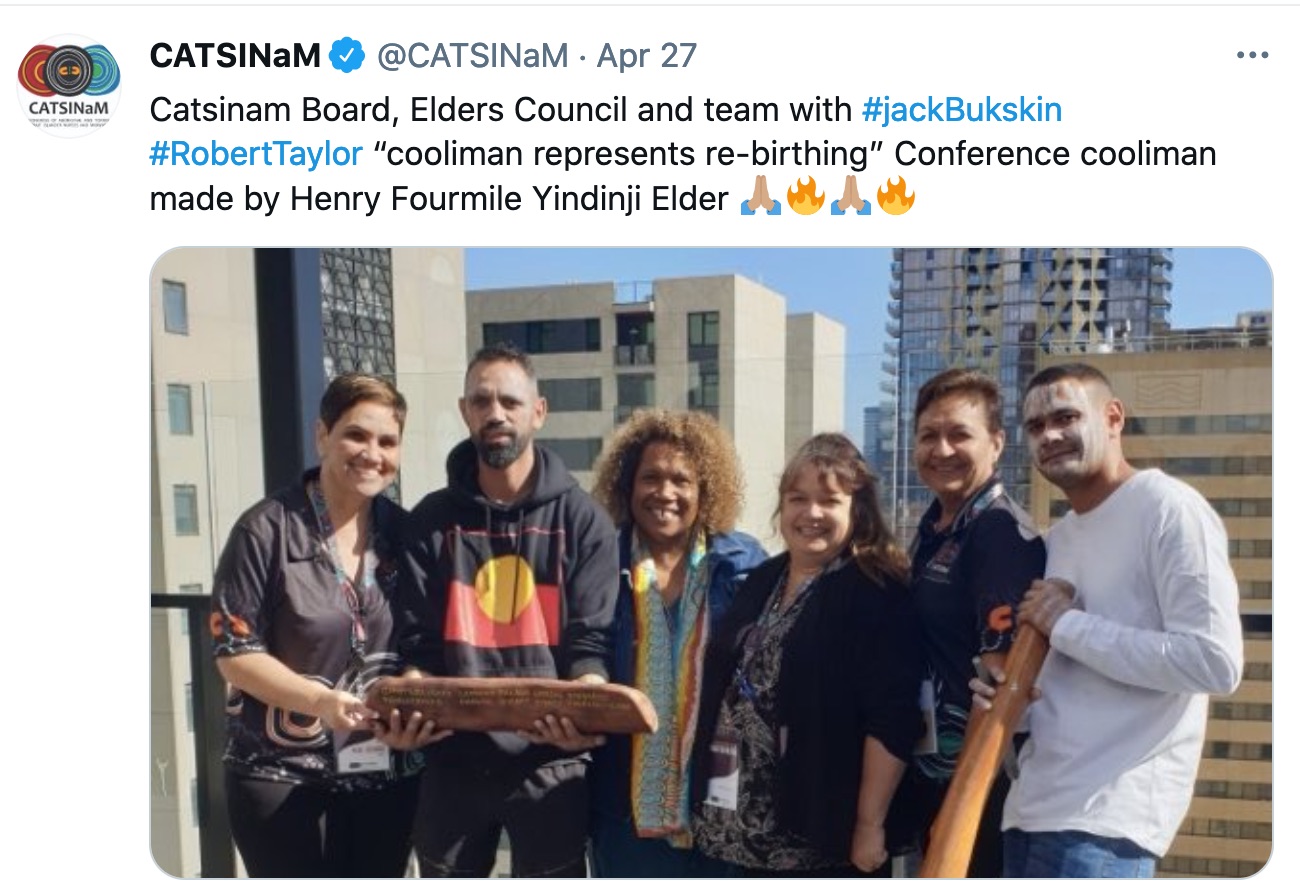 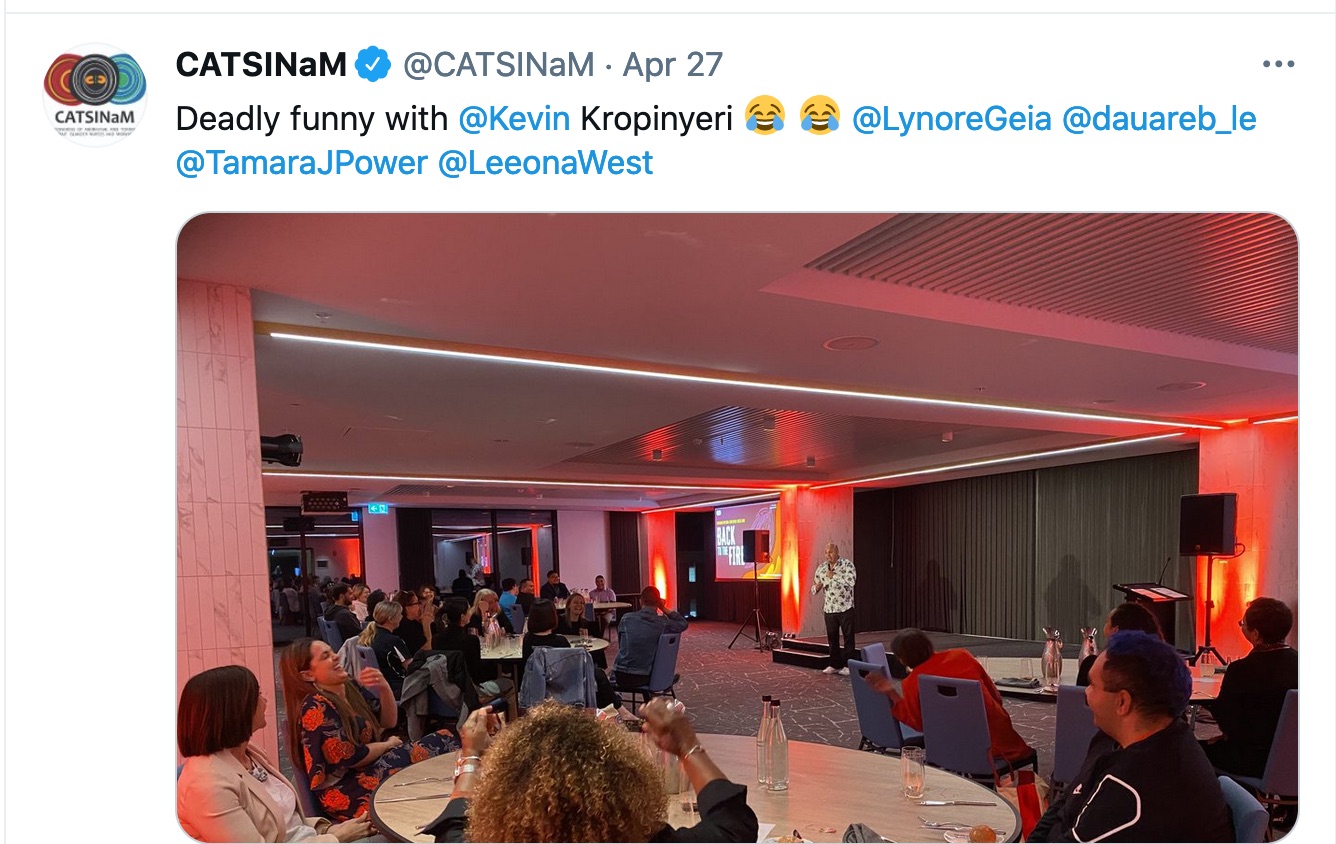 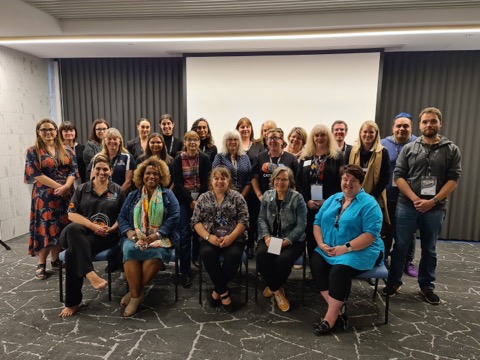 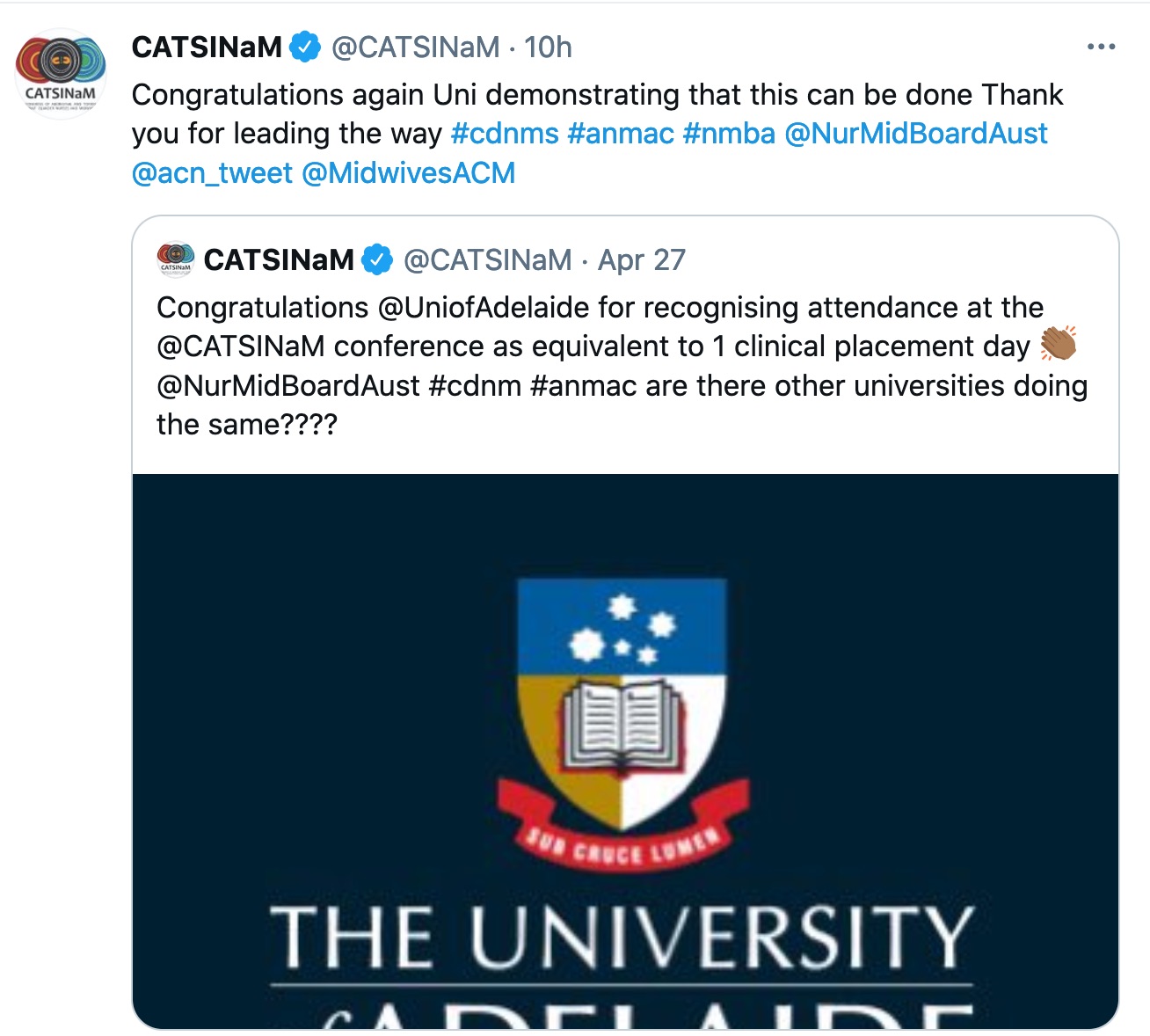 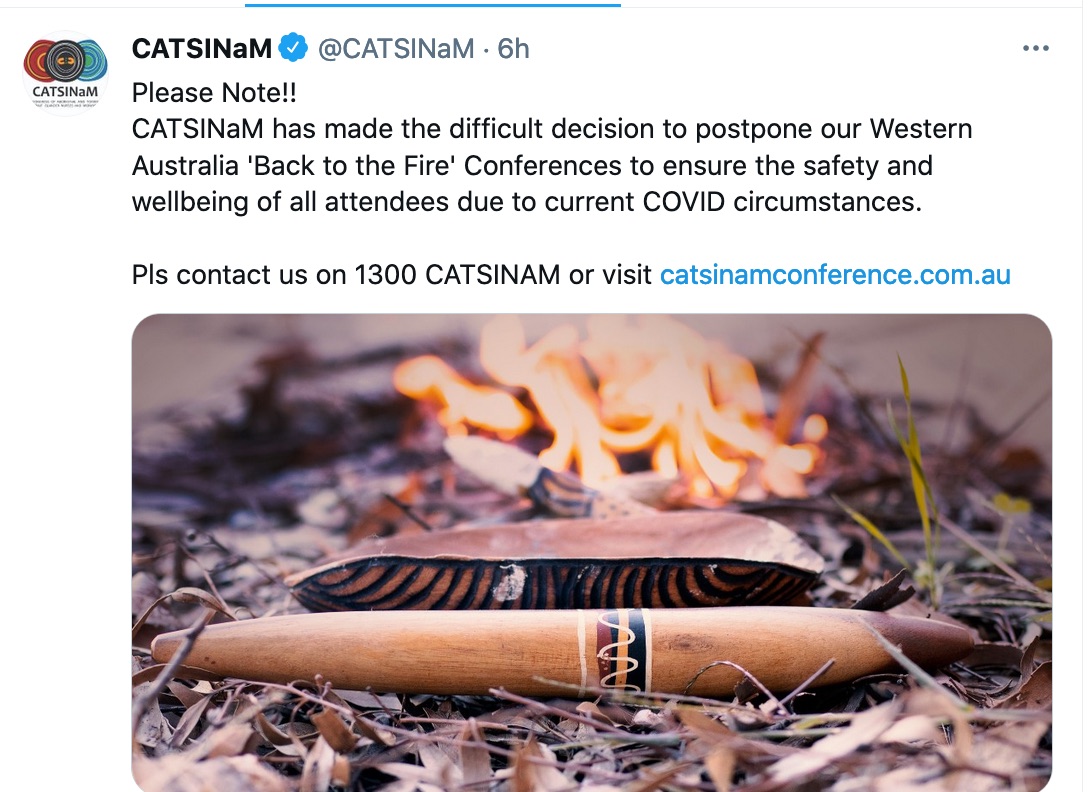