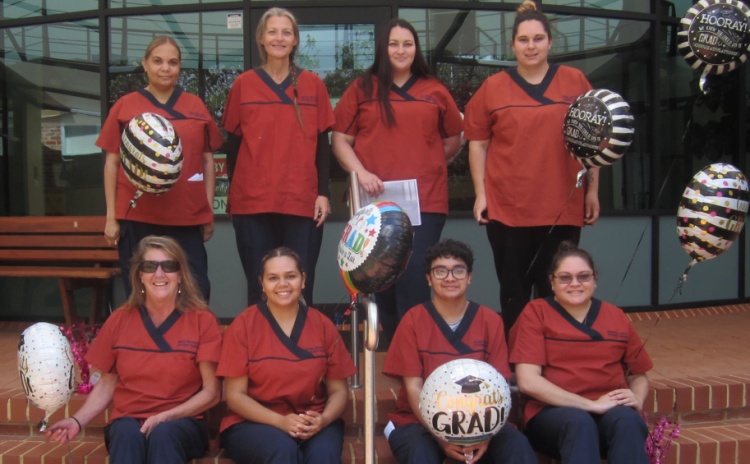 However, a small, award-winning Aboriginal and Torres Strait Islander training provider in Perth is showing the way, amid other hopes for change in nursing and midwifery courses and curriculum showcased at the recent Congress of Aboriginal and Torres Strait Islander Nurses and Midwives (CATSINaM) #BackToTheFire conference event for Western Australia.

“Eat the frog” is the unique staff motto at the award-winning Marr Mooditj in Perth, one of just three organisations across Australia to provide dedicated healthcare training solely for Aboriginal and Torres Strait Islander students.

The motto is about how staff make sure they are providing wrap-around support to students from across Western Australia, in a way that goes beyond the time and focus given by most other training organisations, explains Marr Mooditj CEO Margaret Quartermaine.

It means that any staff member who runs into a student who needs help is expected to step up.

“You don’t handball it, you ask what the need is, you ask yourself if you’re capable of helping or, later, if you’ve exhausted all your own resources, [then you can ask if] you need someone else to weigh in,” Quartermaine said.

“You eat the frog!”, she told Croakey.

Quartermaine laughs that she is not sure where the phrase came from originally, but says it works for Marr Mooditj – meaning ‘in good hands’ in Noongar language – which offers courses for 120 Aboriginal and Torres Strait Islander students each year in primary health care, mental health, aged care, counselling, nursing and hospitality.

The organisation’s work was showcased recently at the Congress of Aboriginal and Torres Strait Islander Nurses and Midwives (CATSINaM) #BackToTheFire conference event for Western Australia, which had a strong focus on workforce issues and the need for culturally safe education and training for Indigenous nurses and midwives. 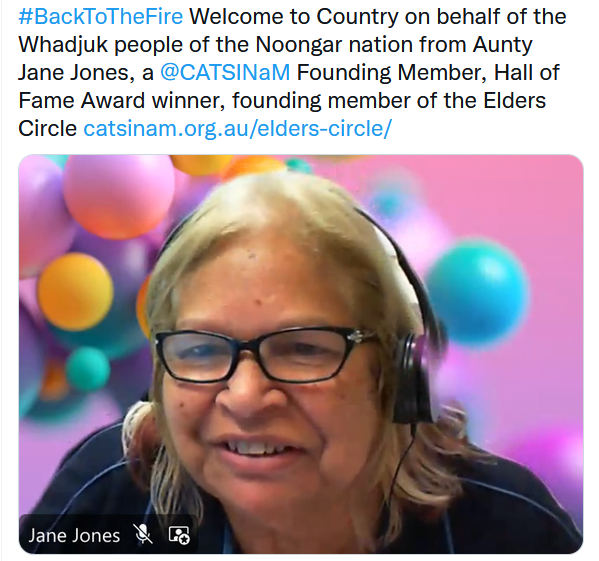 “She was appalled by the systemic racism within the health care system, which she challenged and changed a lot, I believe, along with some other Aboriginal nurses in those early days as well,” Quartermaine said. “She was all about equality, equity and equal rights for Aboriginal people, particularly to access education”.

And Quartermaine, who was mentored by Winch and took over her leadership role there 20 years ago, could not be prouder of Marr Mooditj’s approach, which won early acclaim including the prestigious Sasakawa Award for Primary Health Care Work from the World Health Organization in 1987.

Marr Mooditj’s students come from many different backgrounds, ages and places, from the Kimberley to the Goldfields and beyond. Many come as school leavers, but others are parents who come back to nursing once their children grow up.

Their support needs are also diverse – their cohort might include a student living in a refuge because of family violence or others who have had intersections with the justice system, are struggling financially or with their studies because of illness in the family, or who need support with literacy and numeracy, Quartermaine said.

Staff also bring wide-ranging experience. After the #BackToTheFire event, Quartermaine spoke with Croakey, sharing some of her own history.

One of 11 siblings whose parents were among the Stolen Generations, the former nurse knows what it is like to experience homelessness and live with family violence.

“I’ve experienced the hardships, I think when you come from a place like that, you can appreciate when others are going through similar things,” she said, wishing that an education environment like Marr Mooditj had been available in her time.

Asked what makes it special, Quartermaine said the organisation supports its students, first and foremost, to take control of their own health and wellbeing – “physically, mentally, spiritually, and socially, holistically – before you can even actually go out to take care of others”. It also focuses on encouraging leadership.

“When I say good behaviour, I don’t mean ‘be all nicey, nicey’, I’m talking about being truthful, having integrity, turning up on time, developing genuine connections with each other, respectfully, and to learn together.”

Marr Mooditj now graduates about 25 Aboriginal and Torres Strait Islander nurses each year. All are guaranteed employment, Quartermaine said, due to recognition of their strong training and expertise, and relationships built within the WA health system.

Marr Mooditj also measures its success through the impact of its students’ work, with many in management positions, while others have transformed their own lives in order to graduate. “You can’t put a funding price on that,” she said.

Quartermaine hopes Marr Mooditj can work more in future on supporting enrolled nurses to transition to registered nursing and into more leadership roles, saying tertiary education can be far more daunting for students, with universities often arguing ‘they’re in higher education now, so they shouldn’t need the same support’.

“But for our mob, it’s not about ability – they’ve got that, it’s about their confidence. Our mob are capable, I think what they just miss along the way is encouragement, mentorship and leadership,” she said.

Adam Burdekin, 22, is among this year’s Marr Mooditj graduates in nursing. He told the #BackToTheFire event that he has done a number of training programs in community services and child care – but nothing has matched doing his Diploma of Nursing this year while “surrounded by my culture” at Marr Mooditj.

“Here, no matter your gender or your age, you are able to be brought together by the culture itself, I have never felt as close to [fellow] students as I have at Marr Mooditj,” Burdekin said. “Here, everyone is family…brothers, sisters, uncles, aunties.”

“Regardless of whether I go on to university, I don’t think anywhere else I’ll be able to find anything like the amount of support I’ve found here,” he said.

That includes everything from accommodation support for regional and remote students through to having Marr Mooditj staff “watch us like hawks when we go on placement” to make sure the students feel safe and confident, he said. 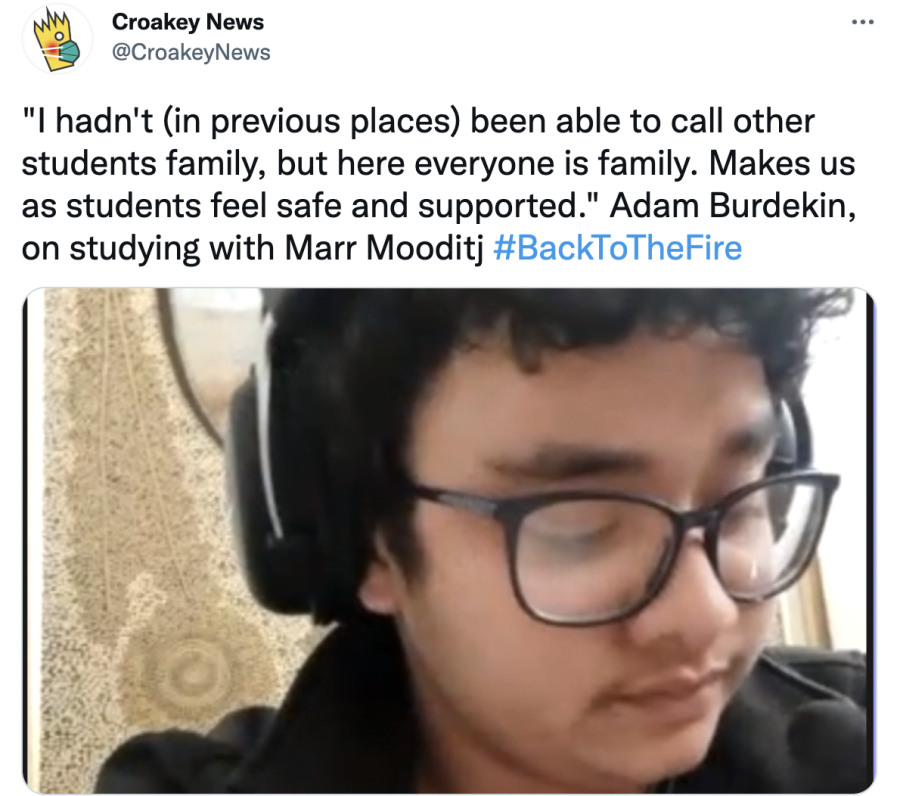 The cultural strength and unique support that Marr Mooditj provides students like Burdekin make for stronger students, who will then have a much greater likelihood of succeeding in their ambitions to work in health, CATSINaM CEO Roianne West said. 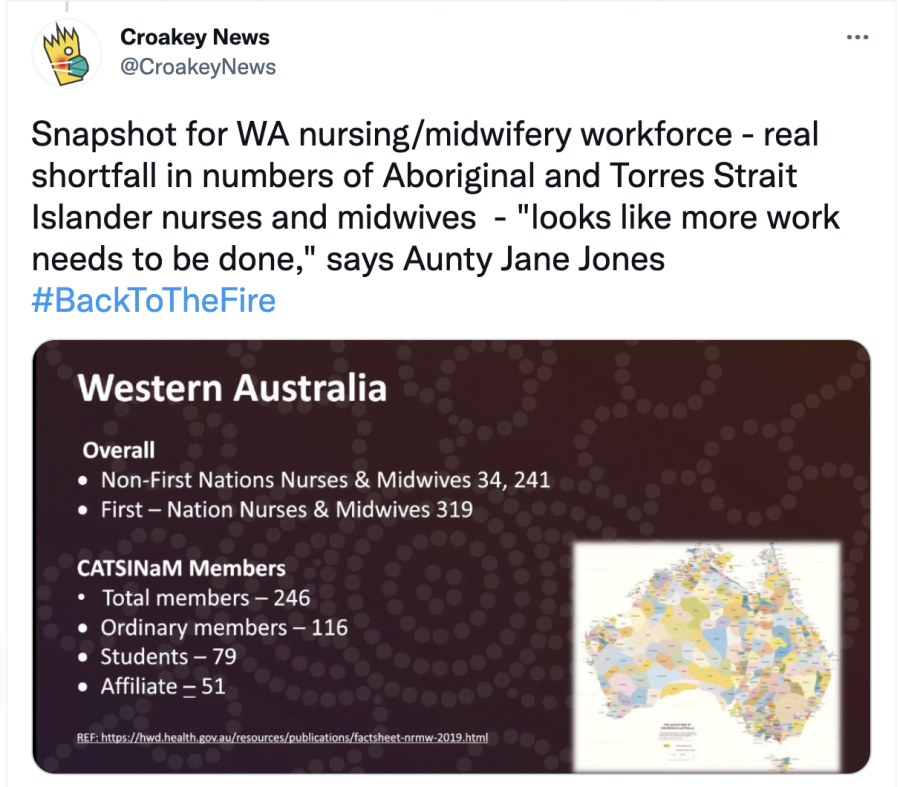 Of broader national concern, still only 1.3 percent of Australian nurses and midwives currently identify as Aboriginal and/or Torres Strait Islander, despite making up more than three percent of the population.

That’s despite the efforts of the 2002 Gettin’ ‘em ‘n keepin’ em report, due to be updated early next year, which said marked improvements in Indigenous health can be achieved through culturally appropriate recruitment, retention and support strategies to increase the involvement of Indigenous peoples in education programs and health care delivery.

Some of the issues driving those gaps were also highlighted at the conference by Pat Turner, CEO of the National Aboriginal Community Controlled Health Organisation (NACCHO), who acknowledged the role of nurses and midwives in meeting key Close the Gap targets like increasing the proportion of babies with a healthy birthweight.

“Our Aboriginal and Torres Strait Islander nurses and midwives are often the first people to address the healing journey for our people,” she said.

However, she acknowledged the toll on the Indigenous health workforce of “cultural isolation, cultural load and a lack of cultural safety in some settings due to racism”, and the need for everyone to keep working to create and sustain structural change. 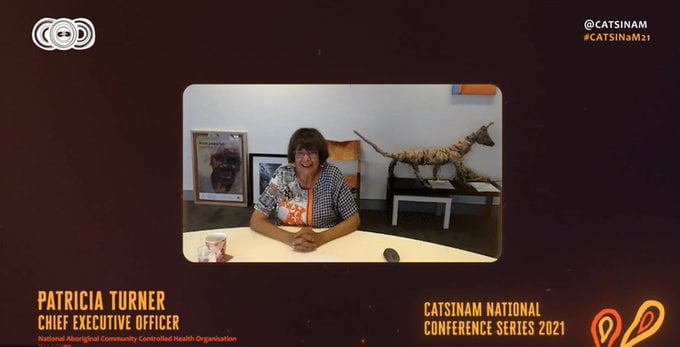 West told the conference that the under-supply of Aboriginal and Torres Strait Islander nurses and midwives “is and has been a persistent and long-term problem in Australia” that challenges hospitals and health services, as well as in academic settings, including nursing and midwifery schools, to improve cultural safety and Aboriginal health care.

Currently around 750 Aboriginal and Torres Strait Islander students start nursing and midwifery each year, and around 250-300 graduate, a completion rate that is only rising one percent per year, she said.

“We seem to be getting much better at attracting Indigenous students into nursing courses; however, our retention and completion rates are problematic, resulting in minimal traction in the goal of increasing our Indigenous nursing workforce,” West said.

In a sharp message to schools of nursing and midwifery, West said that a seminal publication, In Our Own Right: Black Australian Nurses’ Stories, is “both confronting and an authentic representation of the experience of being an Aboriginal and Torres Strait Islander nurse in this country”.

It “absolutely needs to be built into your teaching”, she said.

West welcomed the “perseverance and commitment” shown by Edith Cowan University’s School of Nursing and Midwifery, in a whole of school approach being led by its Inclusivity Committee which reports to the school’s executive, curriculum and learning committees. 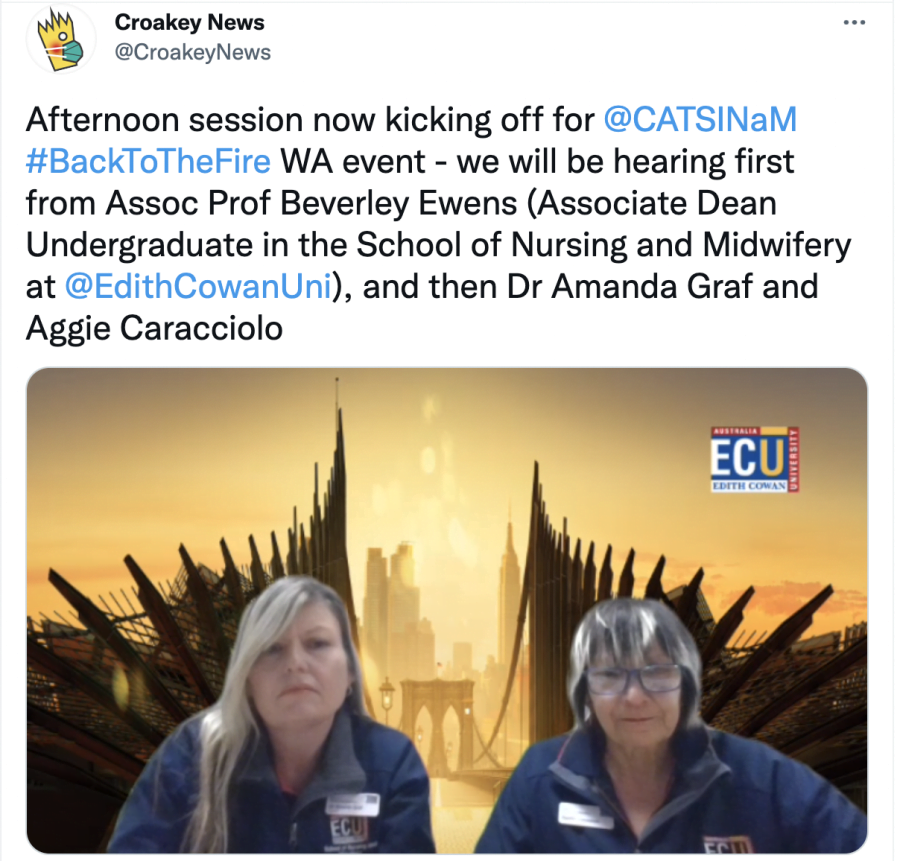 Ewens said increasing Aboriginal and Torres Strait Islander staff numbers at universities was important, as was the need for decolonising approaches to curricula development, listening to students and moving away from a “normalisation” of higher attrition levels, lower enrolment and success rates among Aboriginal and Torres Strait Islander students. 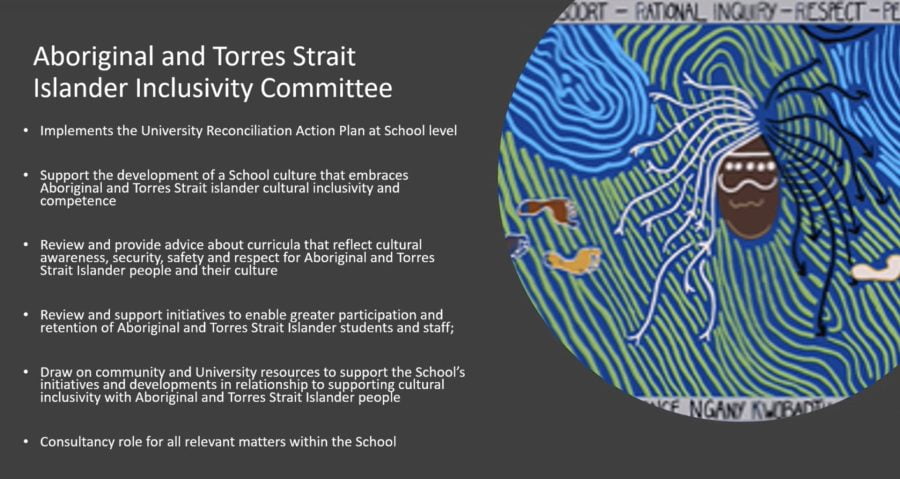 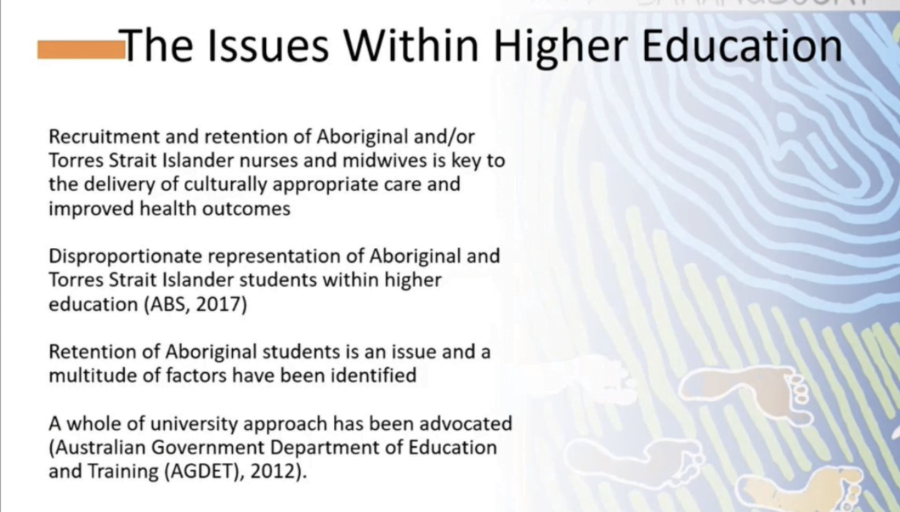 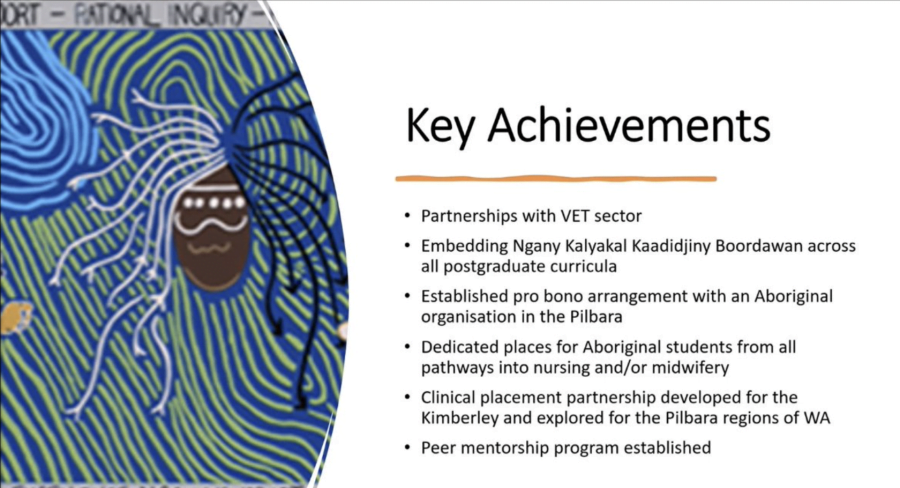 Ewens said the Aboriginal and Torres Strait Islander participation in post-secondary studies is much lower than that of non-Indigenous students — an issue for settler colonial countries across the world, and for mostly similar reasons.

One of those is “cultural effacement and alienation”, compounded by economic disadvantage — a culture shock that does not happen in a vacuum, but is caused by lots of different contexts, in particular political, historical and cultural, she said.

“It’s very important that within our universities we build Indigenous cultural sovereignty and combine Indigenous and Western epistemology and sciences and implement culturally sensitive pedagogues in collaboration with Indigenous communities,” she said.

See these Twitter threads from the WA #BackToTheFire event: 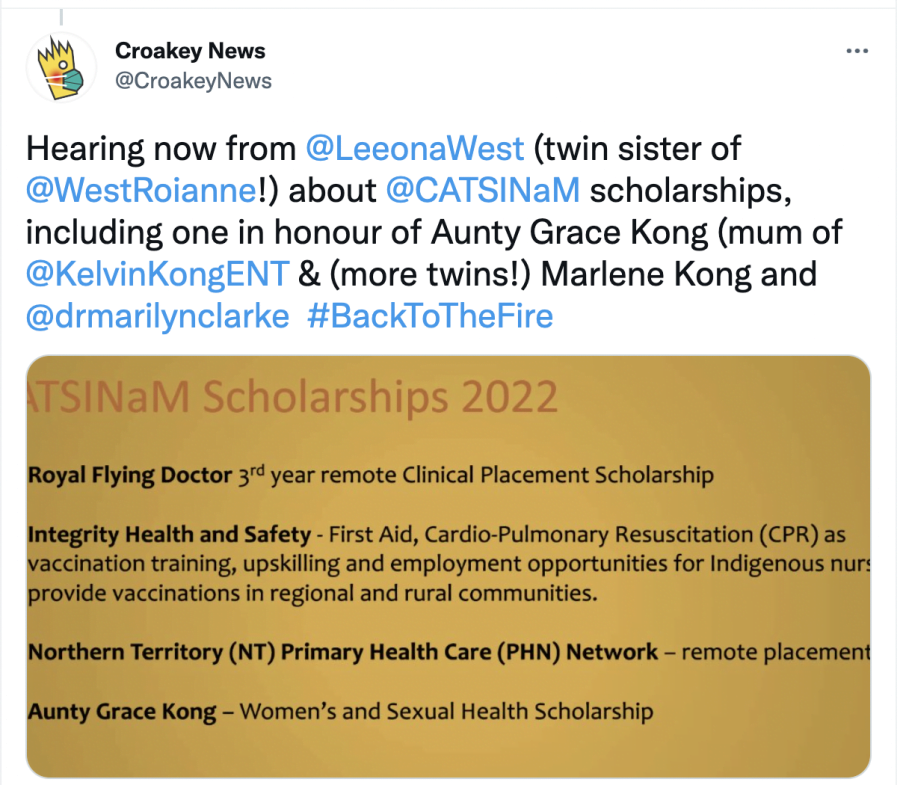 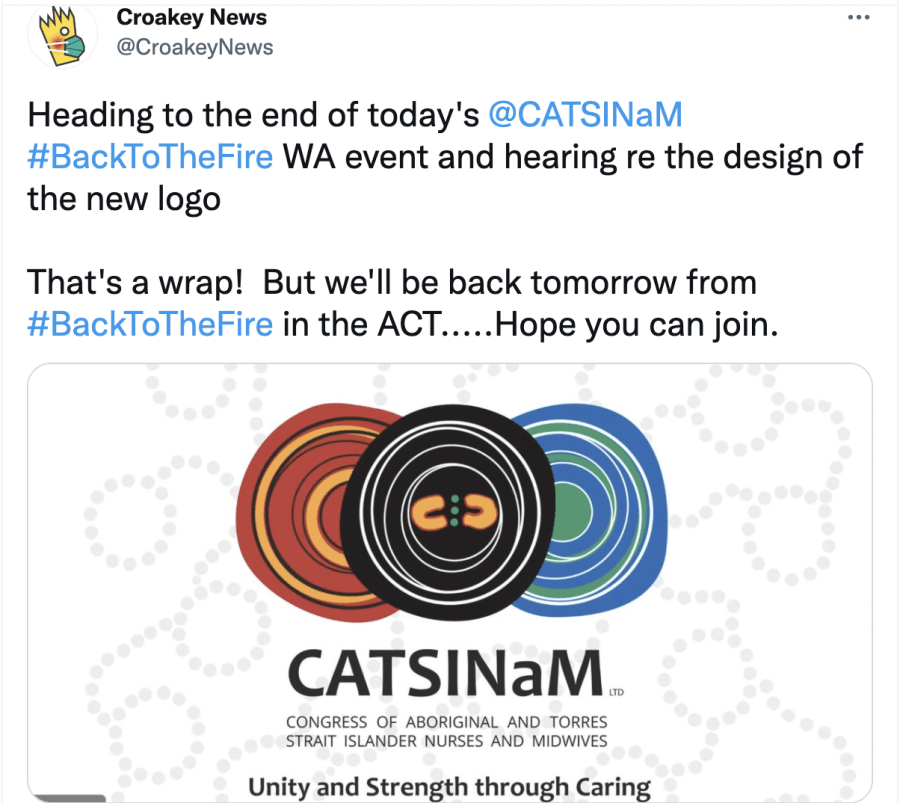 Bookmark this link for our #BackToTheFire articles.