Back to the Fire: showcasing Indigenous knowledges, leadership and cultures. Photo: David Nardoo

Back to the Fire: the Congress of Aboriginal and Torres Strait Islander Nurses and Midwives

The Congress of Aboriginal and Torres Strait Islander Nurses and Midwives (CATSINaM) launches an ambitious national conference series tomorrow, to be held in 10 cities and regional centres across Australia under the theme ‘Back to the Fire’.

It opens with a two-day meeting on Yirrganydji and Yidinji Country in Cairns, and will put national and place-based solutions at the centre of discussions.

The Croakey Conference News Service will cover each event in the series. Bookmark this link to follow the coverage and on Twitter #BackToTheFire and #CNS21.

Professor Juanita Sherwood is discussing the cultural power being harnessed at the upcoming Congress of Aboriginal and Torres Strait Islander Nurses and Midwives (CATSINaM) conference series when she picks up a photo from the bookshelf behind her.

In it, she is standing with the late Elder Aunty Isabel Coe at the Tent Embassy on Ngambri Ngunnawal country in Canberra, near the Sacred Fire for Peace and Justice that has burned at the landmark for Indigenous sovereignty since 1998.

“I’ve been going to the Tent Embassy with my mum forever,” says Sherwood, a Wiradjuri woman and Pro Vice-Chancellor of Indigenous Engagement at Charles Sturt University.

“Aunty Isabel would always say, ‘before you go away again, you’ve got to come down and get smoked, girl’. For me, that fire’s always been really important,” she says.

So it is both poignant and powerful for Sherwood that a coolamon complete with ashes from the fire has been gifted by the Tent Embassy Elders to CATSINaM. The coolamon will travel to the 10 cities and regional centres that will host CATSINAM 2021 conference events under the theme #BackToTheFire over the next six weeks or so.

The conference series begins tomorrow in Cairns on Yirrganydji and Yidinji Country.

Sherwood, who began her working life as a nurse and teacher, dealing with the shocking impacts of racism in Redfern, will speak at the Cairns event as a founding member of CATSINaM, newly appointed member of the CATSINaM Elders Council and inaugural member of CATSINaM’s Muliyan Research Consortium, which first met in December last year at the Tent Embassy.

“It was wonderful to have Uncle Kevin (Buzzacott) remind us of our ability to be cultural beings in this space and to draw our strength from our culture and our ancestors,” Sherwood says of that meeting, which inspired the 2021 CATSINaM conference theme.

Sherwood is fired up by the promise of the Muliyan consortium which aims to form a national collaboration of Indigenous nursing and midwifery practitioners, educators, researchers and allies, as she and other members wrote recently, focused on “addressing racism through transformative Indigenous health and cultural safety education”.

“We want to decolonise health,” she says in a video about Muliyan, which is both a research arm of CATSINaM and a community of independent academics/educational researchers.

“Our role is to be strong, political and start calling the system out for the harm it continues to cause for our people and service providers.”

“Embedding our ways of knowing, being and doing across a course is vital,” she told Croakey, adding though that this should not be confined to nursing and midwifery, or even health.

“We could be such a different country if every agricultural student was thinking about ‘how do I look after this country?’, rather than ‘how do I get the most out of this country?’.” 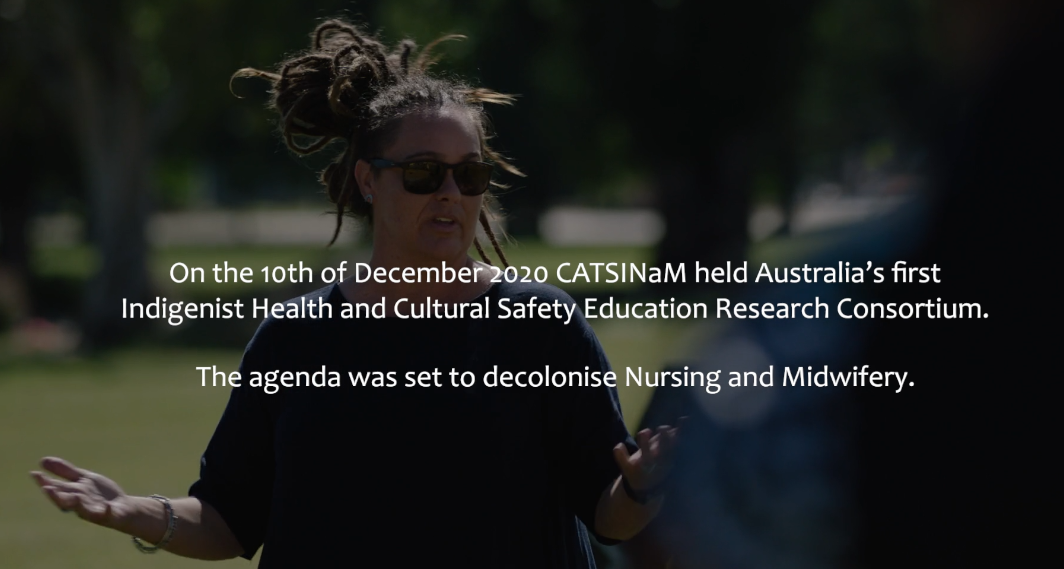 Muliyan was launched by CATSINaM to focus intellectual firepower on decolonising nursing and midwifery training and practice and in response to a #BlackLivesMatter call to action for Australian nursing and midwifery issued last year, during the International Year of the Nurse, in the Contemporary Nurse journal.

That call was led by leading Indigenous academic Dr Lynore Geia, who will speak in Cairns and at other CATSINaM conference events, on its challenge to nursing and midwifery schools, colleges, and universities to “lead through action, to take racism and its effects on Black lives seriously”.

For CATSINaM CEO Professor Roianne West, the focus of Muliyan (see the story of its logo), which means ‘eagle’ in Ngunnawal language, is about “taking the bird’s eye view” and is “unashamedly political”.

A Kalkadoon and Djaku-nde woman from near Mt Isa whose family legacy includes four generations of Aboriginal nurses and a long line of healers, West began work as an Aboriginal Health Worker and moved to head CATSINaM last October after eight years in academia, including as Foundation Director of the First Peoples Health Unit at Griffith University.

She says the collective aspirations for Muliyan and for CATSINaM are to strengthen the role of Aboriginal and Torres Strait Islander nurses and midwives in the health sector.

There’s much at stake for the workforce, West says, pointing to one of her studies that showed national average Bachelor of Nursing completion rates were nearly 70  percent for non-Indigenous students but 30 percent for Aboriginal and Torres Strait Islander nursing students.

As she and others wrote recently: “Racism impacts on the success of Aboriginal and Torres Strait Islander nursing and midwifery students and creates a situation where the student has to decide whether to ignore it, or speak up, often at risk of being further marginalised.”

Recruitment and retention of Aboriginal and Torres Strait Islander nurses and midwives in the workforce remains as big an issue as it was when CATSINaM was founded in 1997, she says. CATSINaM wants not only to see better rates but to build a pipeline through which more Indigenous nurses and midwives do post-graduate and higher degree research studies.

But there are other critical issues  on the CATSINaM agenda, including where the number of Aboriginal and Torres Strait Islander nurses and midwives still make up only one percent of the nursing and midwifery workforce, despite Indigenous Australians being approximately three percent of the population.

CATSINaM is adamant that population parity is not the goal — West says it’s about recognising the value of Indigenous knowledge and the critical importance of cultural safety for Australia’s healthcare system.

The annual national CATSINaM conference has long been a ‘must attend’ for Indigenous nurses and midwives, seen as a “family reunion” and “cultural top-up” for members and often the only opportunity in a year to meet up for the 5,500 strong Indigenous nursing and midwifery workforce that works across Aboriginal and Torres Strait Islander communities and inside mainstream health services.

The Cairns event looked under pressure when Queensland went late last month into a snap lockdown. There’s relief it can still go ahead, but also a little bit of heartbreak among the organizing team that new restrictions mean no dancing — a tough call at a conference packed with Indigenous music and dance.

Despite the logistical complexity, West says it’s critical for CATSINaM to get out to the states and territories “to engage, reconnect and mobilise local members to address local issues” and to make sure that First Nations knowledges and local voices are pivotal to the design and development of the 10 place-based events.

To that end, West says CATSINaM has forged close relationships with Traditional Owners at all sites, most speakers are First Nations people, all conference suppliers have to be registered with Supply Nation, all accommodation venues must have Reconciliation Action Plans and/or Indigenous employment strategies and each event is being used as a showcase for Indigenous knowledges, leadership, arts, music and culture. 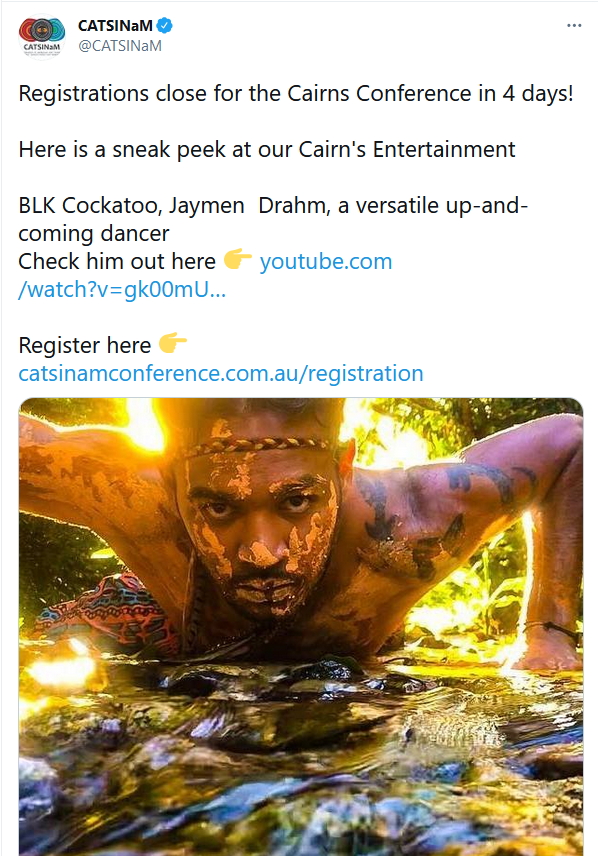 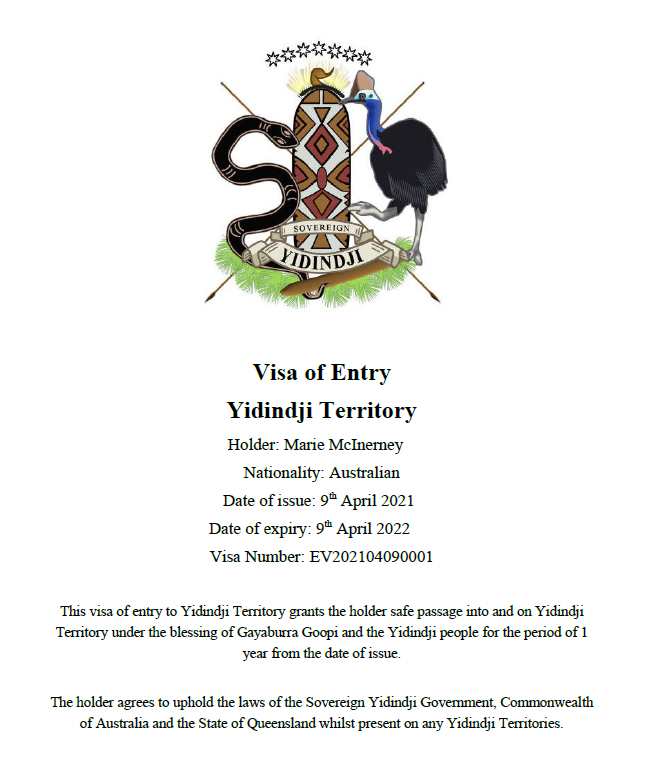 In Cairns, that focus means that each of the 170 plus attendees are being issued with a visa of entry from the Sovereign Yidinji Government, which renounced legal ties with Australia in 2015 and seeks to enter into a formal treaty with the Commonwealth.

Foreign Affairs Minister Murrumu Walubara Yidindji said the visas grant “safe passage into and on Yidindji Territory” to the holders — who have included Prime Minister Scott Morrison and State Premiers  at a Council of Australian Governments (COAG) event a few years back.

Yidindji — you can follow him on Twitter here or the Yidinji Government on Facebook here — says his message to the conference will be the importance of sovereignty and Treaty to Closing the Gap and addressing other critical issues, including the climate crisis.

“Australia is a wonderful administrator but it does not possess necessarily a space to create Indigenous specific solutions for specific areas,” he told Croakey, saying the Yidinji have a track record over tens of thousands of years.

“There were no prisons here, our lore was strong and health was pretty good.”

The conference will also hear from Yidinji Elder Henrietta Marrie/Fourmile, who has served with the UN Secretariat of the Convention on Biological Diversity and published a paper, Emerging trends in the generation, transmission and protection of Traditional Knowledge, which warned that traditional knowledge is under threat along with the environment.

Her work, with her partner Adrian Marrie, on developing a racism matrix for identifying, measuring and monitoring institutional racism within public hospitals and health services will be the focus of her CATSINaM presentation.

Many layers to the theme

The conference will also celebrate the artwork of Cairns artist Susan Reys, a descendant of the Badtjala people of Fraser Island and a Dharrpa Warra woman, whose design for the Back to the Fire theme will feature throughout the conference series and link also to this year’s NAIDOC theme Heal Country.

CATSINaM says the ‘Back to the Fire’ theme draws on the words of one of the Tent Embassy guardians to ‘come back to the fire’, “which reminded us all about the importance of who we are, where we have come from and our place, position, and responsibilities within the Indigenous nursing and midwifery profession”.

It says there are many layers to the theme, but, at its core, it is “a call to us all to remove our blindfolds and to acknowledge the value of First Nations ways of knowing doing and being for nursing and midwifery,” for each nurses and midwife to “critically reflect on their professional and cultural stance”.

In its conference program, it declares:

As a group CATSINaM is united by a deep conviction that Indigenous nurses and midwives hold a gift for the Australian healthcare system.

This gift is held in the way we continue to work together to counteract institutional and individual racism and the deficit approaches that story First Nations peoples, nurses and midwives as well as our ways of knowing, doing and being in Health education, practice, and research contexts.”