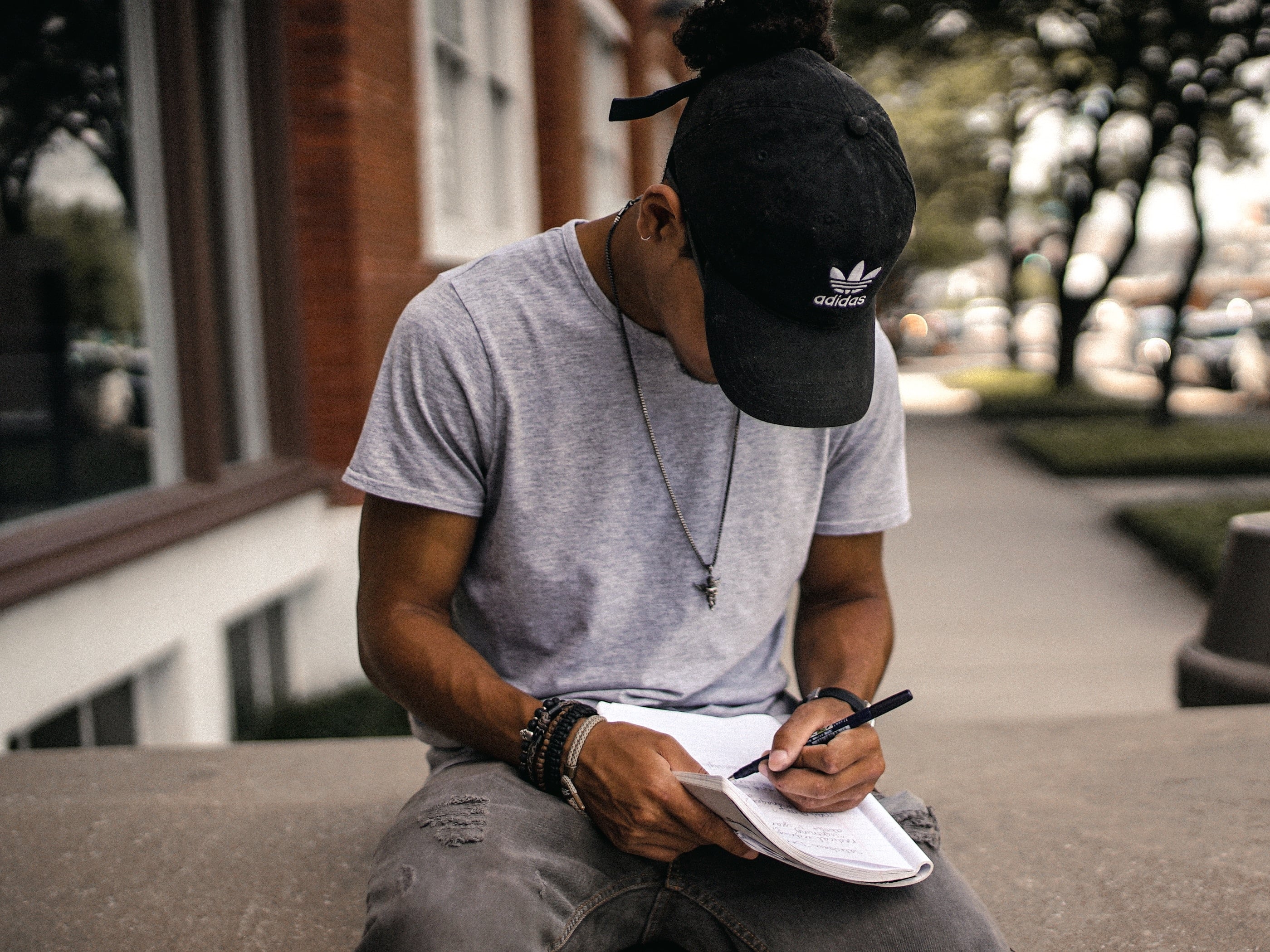 It isn't helpful to jump to conclusions about abuse./Brad Neathery

Balancing work and tertiary study is harder now than in 2012: study

Students know completing a university degree gives them a better chance of landing a high-paying job, often after surviving financial hardship while studying. But striking a balance between life, work and study appears to be getting tougher.

Australia has experienced progressive higher education policies, a social inclusion agenda and widened tertiary access. This has resulted in a rise in working-class, mature-aged, first-in-family and Indigenous students attending university. But government income support has not been quite so progressive.

Read more: Has the push to get more disadvantaged students into universities been a success?

Another study found female students under 34 with financial stresses and in a subsequent year of their degree were at higher risk than other students. Without support, these students were at risk of severe mental illness. Changes to university funding announced in December may add further pressures, including fewer available university places, and graduates needing to repay student loans sooner.

Read more: Universities get an unsustainable policy for Christmas

Evidence of students’ hardship is reflected in findings of a recent survey of tertiary social work students.

Students are having a harder time juggling

Findings from a research partnership between the Australian Association of Social Workers and James Cook University help illuminate the difficulties for some students. Through an online survey in late 2015, a sample of 2,320 students from 29 Australian social work programs reported their experiences of juggling life, study and work.

Many questions were replicated from a 2012 study of Australian tertiary students.

Analysis of both studies showed these more recent respondents were doing it tougher. Many students reported regularly going without necessities including food, medications, fuel and prescribed textbooks. 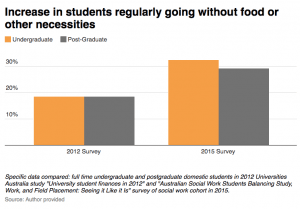 Students were asked: as a student, have you at any time had insufficient money for any of the following? 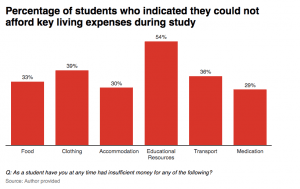 High numbers of students identified difficulties affording food. Over 50% of students could not afford important textbooks, and more than a quarter of the sample reported having insufficient finances for medications during their studies.

Personal responses from the 2015 survey confirmed students’ struggles. This student found a lack of stable accommodation, clothes, fuel or money for prescription medications was impacting their mental health:

I…had to get medication…and owe pharmacies for scripts, eat toast for days, borrow money for petrol etc, postpone specialist appointments…, trawl through op shops for clothes appropriate for work, go…without textbooks…whilst studying, and my mental health and grades have suffered as a result. For the first three months of semester one this year I was couch-surfing until I could find affordable, stable accommodation.

Similarly, another student had to choose between petrol and food:

Budgeting to afford petrol to travel to another campus which is a two hour round trip impacts on the ability to afford food for the day.

Working part-time as well as family commitments while on placement nearly killed me. Even doing a part-time placement was hellish…and I was totally burnt out at the end of each one.

One student and their partner scarcely survived:

My partner and I were studying full time via distance education…no support from parents…we’re on Centrelink benefits. We barely survived. After those 6 years, we could no longer cope with living in poverty as it had a significant impact on our health, mental health and general wellbeing.

The above themes were frequently repeated across all survey data collected.

Only 50% of students said they were receiving any government assistance. Many identified that financial hardship was seriously impacting their daily lives. Some said they were burnt out, while others were dropping out. Interestingly, a 2017 study showed student burnout can be a predictor of burnout in the workplace.

Enhanced support for students’ mental health also is needed. This includes within their professional programs of study. Alongside this, strong university and community mental health networks for students can contribute to a healthier student body and, consequently, a healthier graduate workforce.

The author acknowledges the significant work of Len Baglow in the conceptualisation and completion of all aspects of the 2015 research reported here. Len Baglow, formally of AASW, is Policy Advisor with St Vincent De Paul, ACT.

PrevPreviousCheck out these new reports – on research communications, public health advocacy and more
NextA billion dollar question about the prevention and management of pressure injuriesNext