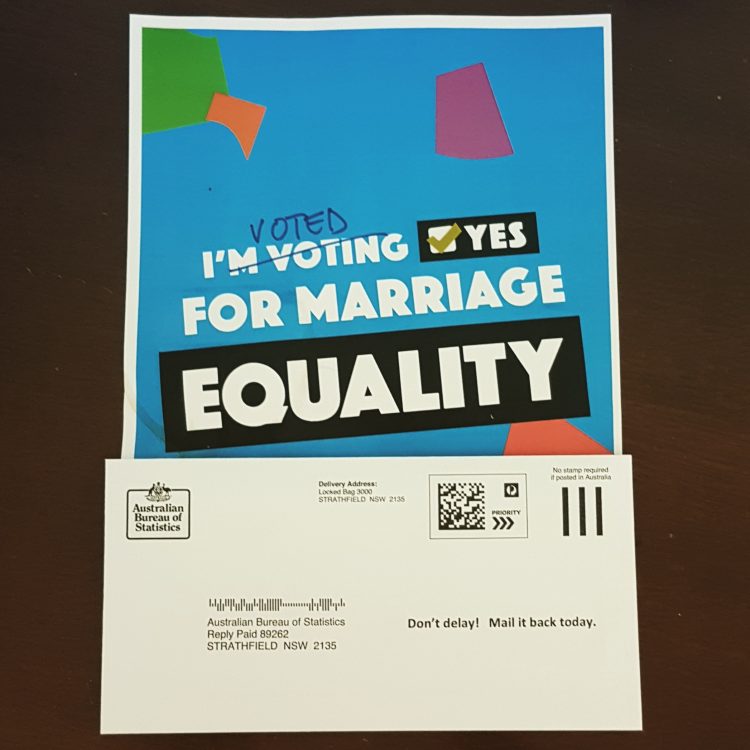 This week marks exactly one year since Australians voted yes for marriage equality, following a divisive and damaging campaign for the LGBTQI community.

Contrary to the predictions of right-wing fundamentalists and the lesser angels of our body politic, the sky has not fallen in, the Sydney Harbour Bridge remains resolutely celibate, and no bakers (or men of the cloth, for that matter) have been forced into same-sex servitude.

In fact, the only thing that’s changed 12 months on — apart from some 5,500 happy couples tying the knot — is our Prime Minister, who as recently as this week was attempting to claim marriage equality as his personal legacy.

LGBTQI Australians were relieved at the outcome of last year’s unnecessary postal vote, but forgiveness for the process, which was traumatising, demeaning and divisive for a vulnerable community, will be a long time coming, writes Pep Phelan in this piece for Croakey.

November 15, 2018, marks one year of marriage equality in Australia, 12 months to the day since the results of a two-month-long postal survey on the civil rights of the LGBTQI community were announced: a resounding Yes.

This was a unnecessary, deeply divisive and intensely traumatic process, motivated purely by ideology, that asked all Australians to ‘have their say’ on the fundamental human rights, dignity, and worth of a diverse minority group of people in this country that make up around 11 percent of the population.

Government opened the door for all Australians to make a personal judgement and have that opinion counted, on an issue that has actually nothing to do with most of those voting, and, would have absolutely no impact in any way on their choices, freedoms, or any other aspect of their lives.

Ex-Prime Minister Malcolm Turnbull stood up in the parliament and claimed the eventual outcome as a great victory, and in the following months frequently defended the entire process by citing the successful outcome as proof that the postal survey was the correct mechanism.

He very publicly wore it as a badge of honour, and his latest television appearance suggests that he continues to believe that the end justified the means.

He, with the assistance (but mostly resistance) of his government ‘got the job done’, surely now we can all move on. 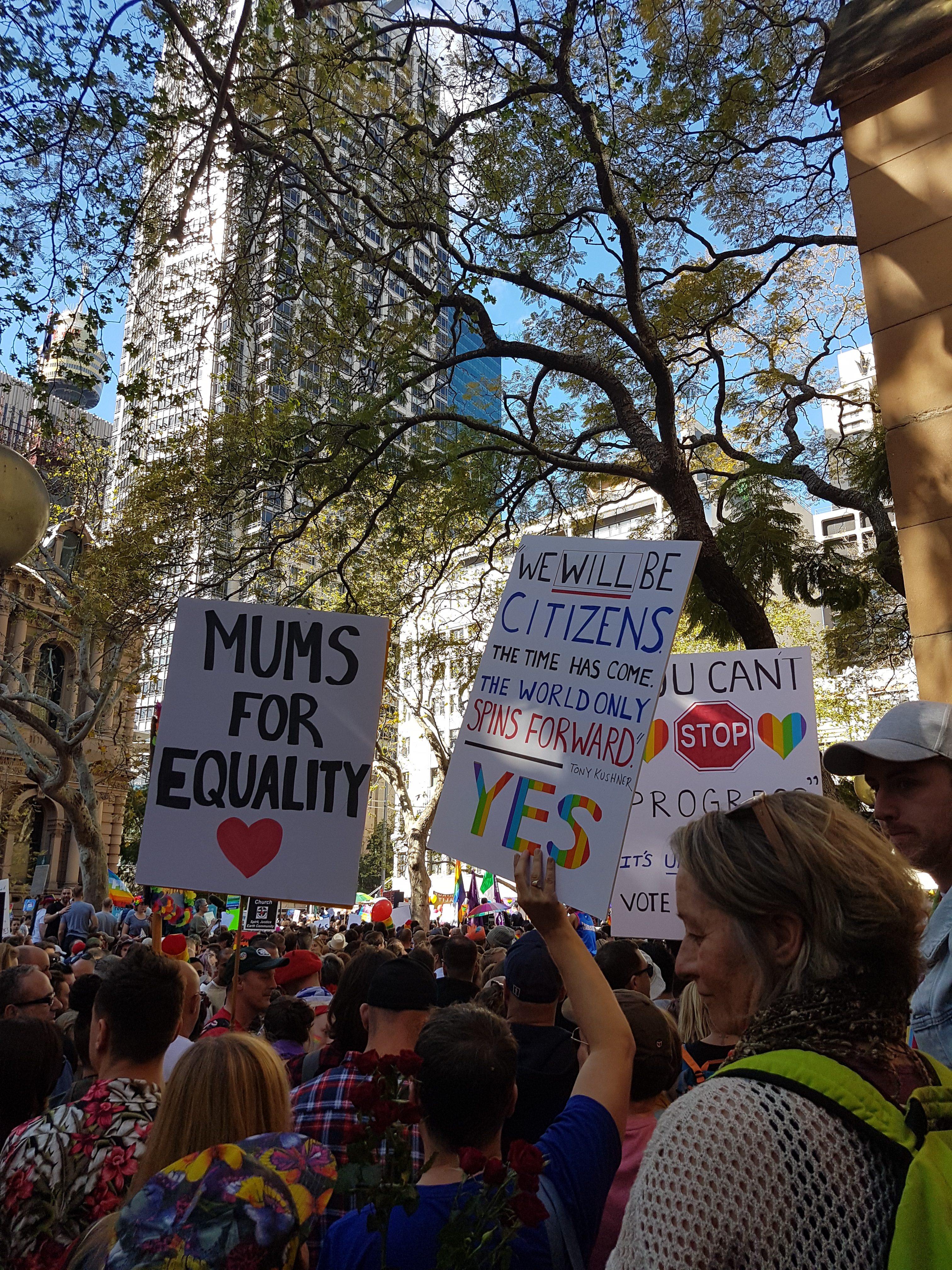 The trauma perpetuated on the LGBTIQ community, and by extension their families and friends, cannot be underestimated.

Even prior to the postal survey, LGBTIQ Australians were already among some of the most traumatised and psychologically distressed peoples in the country. Discrimination, violence, stigma, and social exclusion continue to drive huge health and social disparities (and legal inequities) in this community.

The relentless promotion of cultural heterosexism, and both the overt and insidious moral surveillance against anything that diverges from it, is a toxic burden of unimaginable proportions.

You are constantly reminded that this world is built on a foundation that never took your existence into consideration, and probably never will.

Following the survey, many people describe biopsychosocial signs and symptoms akin to a post-traumatic stress injury.

As an entire community traumatised by what transpired, we remain in a state of hypervigilance, sustained and perpetuated by the debate around ‘religious freedoms’: a thinly veiled attempt at again reducing or removing LGBTQI rights, our choices and freedoms, and continuing to marginalise and exclude us from full access to Australian life.

Do not for one second believe that the LGBTQI community is happy, or forever grateful, to the government or its self-aggrandising facilitator-in-chief, for an outcome that Australians have long known we both wanted and deserved.

We will never attribute this victory to them. It is not theirs to relish, hold aloft as their trophy, or claim triumphantly in the pages of history.

If they want to claim something, they can absolutely take responsibility for enabling and normalising the public airing of horrific bigotry and prejudice, and for elevating and affirming the voices and actions of those who vilify, abuse, intimidate, humiliate, and denigrate LGBTQI people.

They provided a platform for those who actively seek to deny us our dignity, worth, and inherent humanity by undermining, dismantling, or denying our equal rights as citizens of this country.

LGBTQI people were expected to sit back, remain polite and accommodating (or, at worst, silent), be ‘respectful’, and accept a full-blown assault on the validity of our identities and lives as just ‘one side of the debate’.

In defending ourselves, LGBTQI people were met with vitriol, chastisement, and accusations of extremism.

We were fighting for our right to belong as equal citizens, to be able to choose how we celebrated our love, and to finally live in peace knowing our relationships were equal in the eyes of the law.

For so many of us, the fight was actually about knowing deep down that we finally had a right to exist at all. 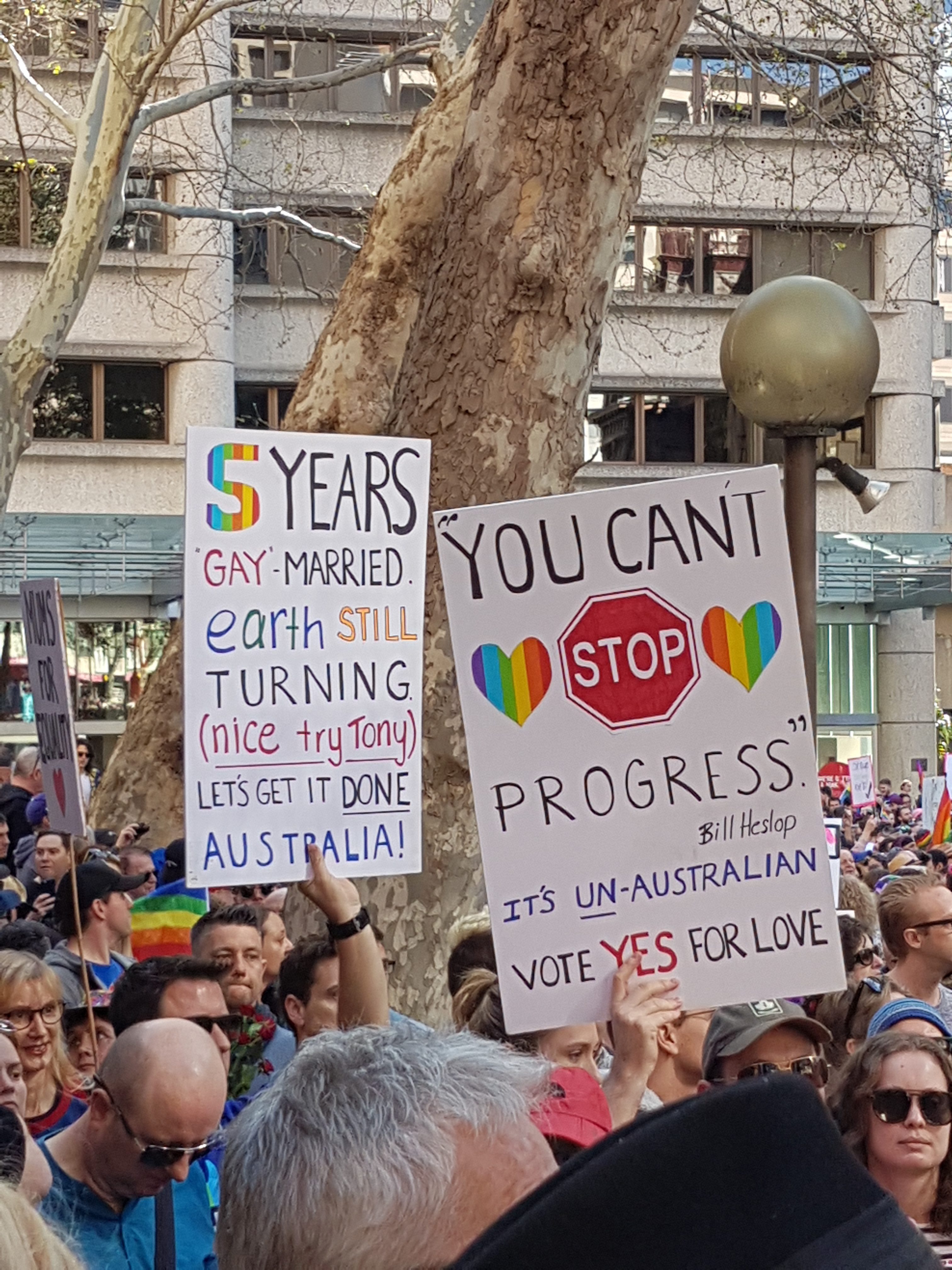 The final outcome was pure elation. However, we will never forget the cost that came with it.

Many LGBTQI people experienced the agony of not knowing which way family and friends had voted, or the devastation of the people that they love and respect voting ‘no’.

Many have told of the hurt and pain, sense of rejection, and distress this has caused them, impacting the sense of trust, security, mutual respect, and reciprocal love in those relationships.

For many, the two-month postal survey was incredibly triggering, invoking past traumas of coming out to family and friends, and the rejection experienced from those who were supposed to love and respect them the most.

This toll has and will continue to incur substantial economic costs to the health, mental health and social services sectors well into the future.

Organisations such as ReachOut, Headspace, and the Black Dog Institute reported substantial increases in people reaching out for help both during and following the survey.

Although empirical evidence is sparse so soon after the event, anecdotal reports suggest increased anxiety, depression, suicidality, psychological distress, and substance use among the LGBTQI population during this time.

Research shows that increased rates of acute and chronic cardiovascular, endocrine, respiratory, gastrointestinal, and nervous system conditions and disorders are linked with psychological distress, and as a result of the chronic and intractable stress experienced in marginalised and stigmatised populations.

The economic and social costs of these chronic diseases and conditions, and the temporary or permanent disability that results, will likely be greater than anyone could have predicted.

Only time will reveal the extent to which this survey impacted our health, social services, education and economic fortunes. 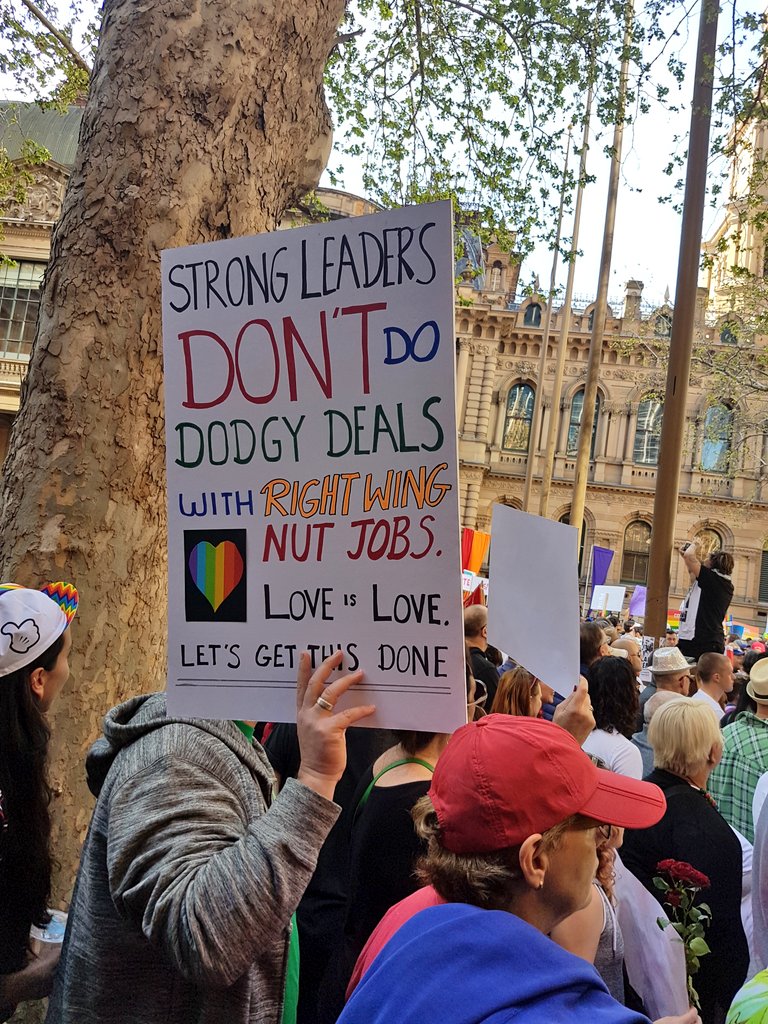 Over the past year, LGBTQI Australians have experienced, first-hand, what it is like to have their love and relationships recognised as equal, finally validating in law what we already knew to be true.

Families and friends have celebrated with ecstatic couples at ceremonies and receptions, sharing in the simple joy of two people who love one another committing themselves symbolically and legally to a shared life together.

It’s been an incredible year for LGBTQI Australians. Marriage equality was our victory, and a victory for all Australians, to live in a fairer and more progressive society.

Let me be clear, however: we are not complacent.

We are acutely aware that there will be continued and sustained attacks on our rights and freedoms, particularly by conservative individuals and organisations, those who use religion as a weapon of division, destruction, and hate.

One year on from such a brutal experience, many of us still feel exposed, vulnerable, and battle-fatigued.

How much has changed, but how things still remain the same. 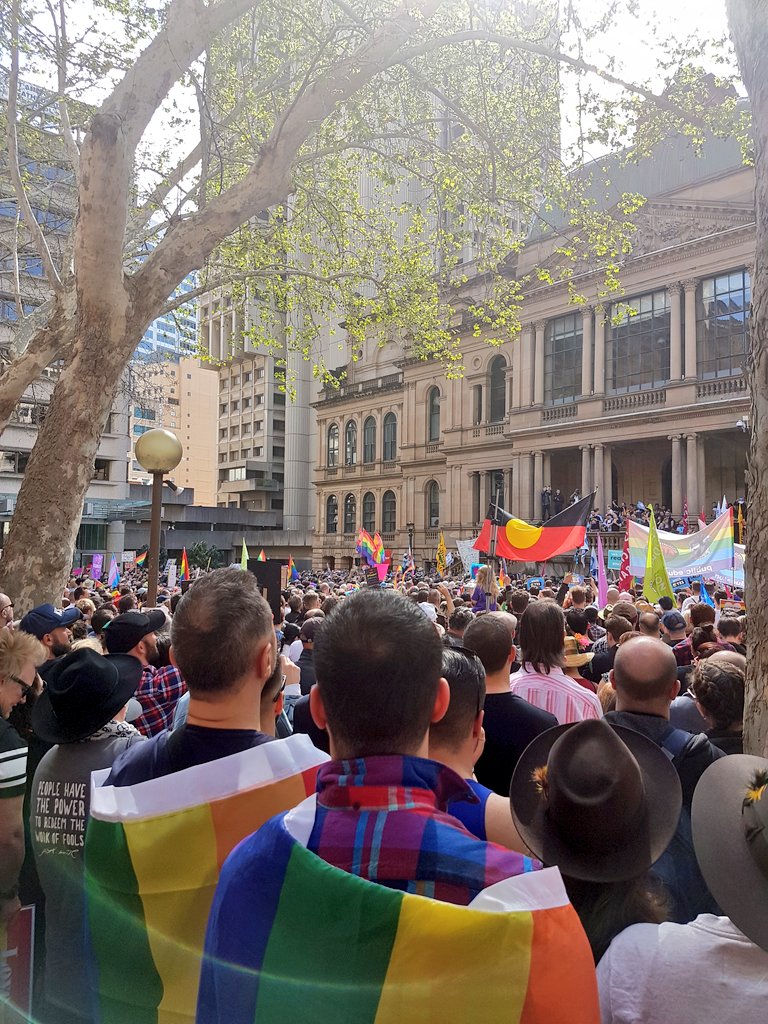 Pep Phelan is a mental health and rehabilitation professional, with a strong interest and experience in the area of primary and secondary psychological trauma, and Indigenous social and emotional wellbeing.

Pep works as Manager of Alumni Development at The Poche Centre for Indigenous Health at The University of Melbourne, where she is a 2018 Leadership Fellow

In planning for the 2026 Census, what can Australia learn from overseas?

PrevPreviousOn the edge: #ACEM18 to put a spotlight on doctors’ mental health
NextWe need to talk about racism in health – #VicVotesNext