Many people were in raptures about the music of Peter Roberts at the 12th Australian Palliative Care Conference in Canberra yesterday, judging by the Twitter stream (and you can see a selection at the bottom of this post).

Peter is a music thanatologist – which is not to be confused with music therapy.

As Jennifer Doggett explains below, music therapy is about working with patients to create and make music to help achieve therapeutic goals, whereas music thanatology does not require any active participation from patients and can be used even when a patient is asleep or unconscious.

The profound power of music 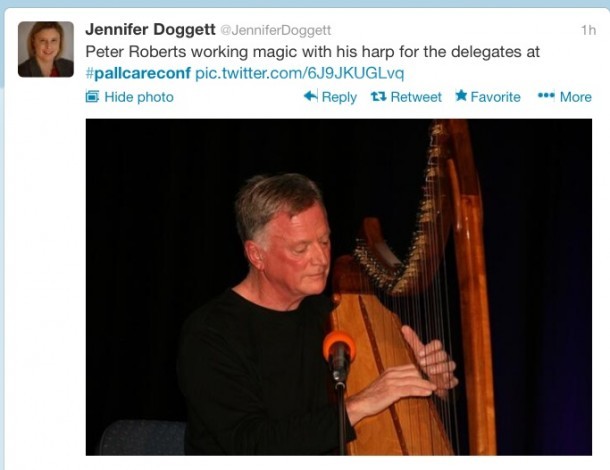 In a conference filled with words of wisdom, some of the most powerful messages have been communicated with no words at all.

Music thanatologist Peter Roberts used the magical sounds of his harp to convey the power of music in the lives of people with life-threatening illnesses.

As he played, the energy in the auditorium shifted and settled as people closed their eyes and visibly relaxed in their seats. Some people started crying and others reported feeling as though they were floating through the air. One delegate said ‘I just wish this could go on all afternoon.”

Reactions such as this do not surprise Peter, who knows how profoundly music can affect people, both physically and emotionally.

He has collaborated with researchers to explore the impact of his music on patients, including premature babies. One study found that his music resulted in improvements in the oxygen saturation and heart rate in 67% of babies receiving specialist neo-natal care.

Other research has focussed on how music can help deal with many of the difficulties of serious illness though changing breathing patters, quieting the mind and easing pain.

He says that he doesn’t completely understand how his music works to achieve these results but that it comes from the relationship he establishes with patients through his music. This does not have to involve any formal communication or interaction between him and the patient.

In fact, he feels that language is very limited and that through his music he can have a much richer communication with patients than he could via a conversation.

Peter trained in one of the few programs in the world for music thanatology, in Montana, USA. He currently works at the St John of God Hospital in Geelong, Victoria. He is part of the hospital’s pastoral care team and works with the other members of the team, as well as the medical and nursing staff, to provide individualised care for hospital patients.

His role is to use music to create a ‘sacred space’ for patients to enable them to find peace and clarity to deal with the challenges of their illness.

He describes it as providing a ‘safety-net’ for the feeling of being in free fall experienced by many people when faced with a life-threatening illness.  It can also help both patients and their families to accept the inevitability of death.

He is keen to differentiate what he does from music therapy, which he stresses also has an important role to play in health care. The difference is that music therapy is about working with patients to create and make music to help achieve therapeutic goals, whereas music thanatology does not require any active participation from patients and can be used even when a patient is asleep or unconscious.

Peter draws on a rich heritage of world music in his work, including Mongolian overtone singing and Tibetan singing bowls.

While he does sing songs when appropriate, much of his music does not use words as he feels they can create a barrier to enabling people to open up and respond to the music.

He says the power of music is that people can’t block it out or resist its effect, the way they can with language-based communication.

For this reason he also does not play familiar tunes or melodies. “The way people receive music is different when it is something they don’t know. It reaches them in a different place,” he says.

Like the Ngangkari (traditional Aboriginal healers) who presented in the same session, Peter feels that his ability is partly a technical skill that can be learnt but is also partly a gift he inherited.

He feels strongly that he was drawn to this field, after a successful business career, because he had something unique to offer people dealing with serious and life-threatening illnesses.

Those who attended his presentation at the Conference would certainly agree.

Once a Vice-Admiral in the Navy; now leading a team of volunteers in palliative care

Learning from the traditional healers of the Central Desert lands

Some expert advice on dealing with grief (also an issue for birds, elephants and other animals too)

PrevPreviousHow health economists could help improve end-of-life care
NextWhat will it take to rediscover a more inspiring politics? This poem has some leads…Next