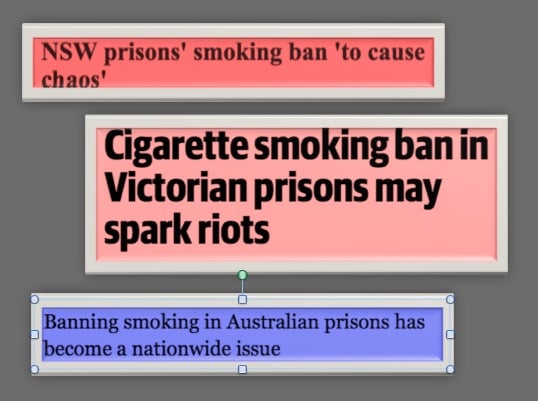 Behind the headlines: a progress report on smoke-free prisons and prisoners

There were two moments where I slunk down a little in my seat at the Oceania Tobacco Control Conference workshop on ‘Smoke Free Prisons: successes, challenges and supporting former offenders to remain smoke free’.

The first was when one of the speakers said “I hope there are no tabloid journalists here today” – just as I was delightedly tweeting the comment that tuna has replaced tobacco for ‘currency’ in Tasmania’s prisons (it’s related to protein for prisoners who are into weight-lifting, apparently).

The second was the genuine consternation in the room about how the media is “so negative” about prison smoking bans. As one speaker said, the mainstream media usually bangs on about the “soft life” of prisoners if they have TVs in their cells – “but take away tobacco and you get ‘why are you being so hard on prisoners?'”

As my story at the time sought to convey, certainly that tension erupted in Victoria in July when prisoners rioted at the time smoking was banned. While the connection hasn’t been proven, the resulting headlines were the stuff of government nightmares and confirmed Western Australia’s reluctance to join the “domino effect” of bans across Australian prisons.

One of the narratives in this debate is around the view that smoking is the only “freedom” left to prisoners and that bans are punitive. Public health advocates counter this view by asking where in an addiction is there freedom and choice, and of course point to the desperate health and financial impacts of smoking. They also ask how much prison addiction has been driven by the use of tobacco in behaviour management and as part of prison culture.

Another narrative in this debate is the rationale that prisons were one of the few remaining workplaces where smoking was permitted, which wasn’t fair to non-smokers (prisoners and staff). Others counter that people are still allowed to smoke in their homes, and that prison is home for prisoners (who should therefore be given the choice, despite concerns that partial bans are so much harder to implement in the prison context).

The workshop was a great opportunity to hear from people involved in smoking bans at various stages of implementation and in various roles to discuss different approaches and common problems or solutions. (For my initial ‘riot story’, I could only get very basic insights into Tasmania’s experience via a formal email query).

In summary, the workshop participants agreed that prison bans are good public health policy and are mostly working – the first port in a ‘smoke free Australia’.

But it highlighted too the likely benefit from extensive research and more input from prisoners. Much media scepticism about the bans is that journalists can’t test assurances that smoking has actually stopped and that prisoners get enough quit support.

Below is a summary of the workshop discussions.

State of play in Australia

About 84 per cent of Australian prisoners smoke versus around 15 per cent of the overall population, and they intersect with a range of other disadvantaged groups with high prevalence, including Aboriginal and Torres Strait Islander people, and those with low education levels, mental health issues, trauma, unsafe and insecure housing, etc.

New Zealand led the move to smoke-free prisons, followed since in Australia by the Northern Territory, Queensland, Tasmania, Victoria and now New South Wales, though controversially some prison officers are exempt in the latter.

The workshop heard that about 46 per cent of smoking prisoners want to quit – around the same level as the general population of smokers. Here are some of their views on smoking gathered ahead of Tasmania’s ban:

‘It stops me being fit.’

‘It’s like money in here, it’s amazing what smokes can buy.’

‘Quitting is something I’d find really hard to do on the outside – everybody I know smokes. This is a real opportunity for me to get my shit together before I get out of here. I’m sick of being a prisoner to the smokes.’

One group of prisoners at a Western Australian minimum security prison who were trying to quit before being released all nominated family as their reason to stop.

Asked why they smoked, they said: company of fellow inmates, to fit in, relieve boredom, and in response to situations outside the walls. “They’d talk about how they’d just be getting somewhere with quitting, when they’d get a call about something that had happened outside, over which they had no control,” a quit program worker said.

Another regional prison program found that boredom was the biggest problem, particularly with the axing of a number of art programs. “We notice a lot of prisoners take up smoking in prison, they don’t know what (else) to do.”

Many prisoners welcomed the opportunity to stop, but others resented it being forced upon them. A follow-up survey six months after a ban was introduced at one prison generated negative comments to begin with, including that they would start again if they could. But they became more positive.

“You don’t crave what you don’t see.”

“I still think it’s good to quit the smokes. It’s just the way it’s done….like a gun to your head.”

A Tasmanian corrections supervisor told the workshop that tobacco plays a huge role in prisons, “an ingrown culture we were up against with the smoke-free project”. Cigarettes were used to buy drugs or mobile phones; by staff as a way to diffuse aggression (offering prisoners a smoke to calm them down); and to open up communications. Many staff also felt they should be able to smoke.

Tasmania’s Justice Department did a staged implementation of the bans, starting with the smaller facilities first. Champions were found among inmates and staff, access to tobacco and lighters was reduced weeks out from the ban to stop “stockpiling”, and distractions were organised – from yoga to movie nights and barbecues.

Prisoners were offered free nicotine replacement therapy for eight weeks, and could get them for half price for a further four weeks. A centralised NRT register showed that initial take-up was 68 per cent and was down to 15 per cent four months on.

The big issues were NRT misuse, negativity from some staff and inmates and a media focus on rising tensions “that had the potential to encourage inmates” to act up.

“Prisons are complicated and high risk environments,” the supervisor said. “At any day, things can go awry. It was buy-in from staff and prisoners that made it work.”

Apart from media criticism, the biggest challenge across the jurisdictions was the misuse of free nicotine replacement therapy (NRT). The Tasmanian supervisor confirmed reports that inmates boiled nicotine patches with tea-leaves that were then dried, rolled and smoked. “Our chaplain had more orders for the Bible than in five years!”

NRT was a key implementation strategy everywhere, although the jurisdictions differed on what levels of support to provide both inmates and staff (in Victoria staff could access 2×12 weeks NRT over a two year period, while in Queensland staff support extended to 16 weeks of NRT including for household members who also smoked.) But now all eyes are on the Northern Territory where NRT was phased out a year after the ban started.

There were widespread reports that Victoria’s prison riot in July was directly connected to the smoking ban, although others have blamed overcrowding and a bikie war. One participant pointed out there are now 55 prisons in 5 states and territories that are smoke free and only one had a riot.

“It kind of dented the confidence of the government but their resolve hardened again, so that’s good,” said one Victorian participant.

The workshop also heard that Queensland media reports that attacks on guards had doubled after the ban involved “mischievous cherry picking” of results. It was told:

Other challenges for various prisons have included:

The workshop heard about a study of 11 prisoners, mostly Aboriginal and Torres Strait Islander people, who were all on remand for between 7-14 days.

Asked about their coping strategies for having to quit on entry to prison, many could not “intellectualise” them as such, but talked about how it helped to be surrounded by other non-smokers rather than in communities where smoking was “everywhere” (in some remote Aboriginal communities in the Top End prevalence is estimated at 80 per cent). Four reported enjoying “less humbug” – that is, being hassled for cigarettes by others.

Asked what would make them relapse on release, they nominated: family or partners smoking around them, identifying themselves as smokers, smoking linked to alcohol and drug use, managing stress and managing weight.

In talking motivating factors to quit, many nominated health and fitness (including wanting to play sport), their children or partners, and others wanted to avoid the “cultural obligations” around sharing cigarettes.

The study reported that 9 of the 11 returned to smoking immediately on relapse, though one woman confided she had had to smoke four in 10 minutes “to get over the fact that they tasted so bad”.

As this small study hints, the workshop confirmed that ongoing failures to address recidivism in criminal justice by not properly supporting prisoners on their release (and of course before they offend) extend also to failure to prevent relapses in smoking.

This month the Medical Journal of Australia reported that (mostly US) follow-up studies of prisoners after their release have found that 56 per cent reported resuming smoking within 24 hours and 84 per cent within 3 weeks.

The workshop heard that support in Australia for staying smoke-free post-release has “fallen outside of the scope of implementing prison smoking bans”.

“What we really want to talk about now is smoke-free support on release,” said one speaker.

One post-release service provider told Croakey in response: “It’s true that we don’t think about smoking in the same way that we think about other issues like finding ex-prisoners somewhere safe to live, managing mental health issues, drug and alcohol support, and access to jobs or training or education. ”

The strong message of the conference is they should, given the evidence of a landmark study published earlier this year that showed that up to 1.8 million of the country’s 2.7 million smokers will die from their habit if they continue to smoke and that the burden lies disproportionately on those experiencing disadvantage.