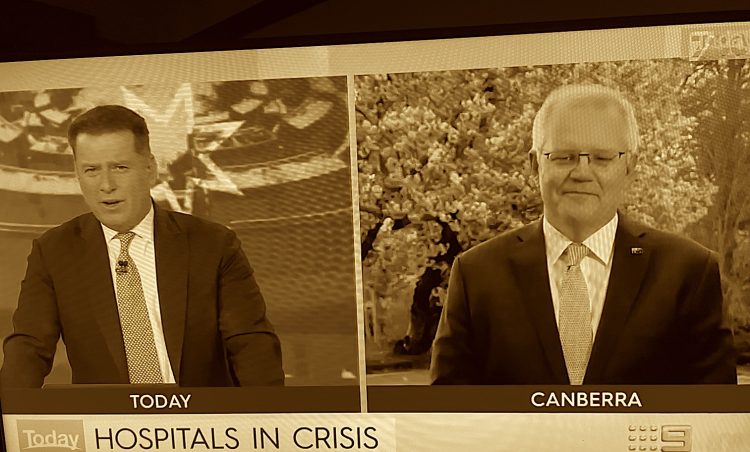 Prime Minister Scott Morrison is on the attack over states' calls for more hospital funding, with the Queensland Government in his sights. Still from Channel Nine interview aired on ABC TV's 7.30 Report

Introduction by Croakey: In the midst of a public health crisis, nothing could be less inspiring than the sight of political leaders fighting over public hospital funding.

It is so ‘business as usual’ when the times demand that governments at all levels respond in innovative and solutions-focused ways.

As well, the crisis of COVID demands an integrated, systemic response that does not focus on hospitals in isolation from the rest of the health system.

Below, health policy analyst Charles Maskell-Knight digs into the war of words and retrieves some uncomfortable truths. Uncomfortable for the Prime Minister and the Federal Government, that is.

Public hospital funding is back in the headlines. The States have collectively written to the Commonwealth Government asking for increased funding for public hospital services to address the ongoing COVID-19 epidemic.

The Commonwealth is pushing back, citing an increase of 71 percent in public hospital funding, and suggesting the State need to increase their funding levels.

It may come as a surprise to many, but the 71 percent factoid is true.  According to the National Health Funding Body, Commonwealth payment under the National Health Reform Agreement in 2012-13 was $13.1 billion. By 2020-21, it had increased to $22.4 billion, or 71 per centmore.

But as Algernon Moncrieff observed, the truth is rarely pure, and never simple.

The first thing to say about it is that the increase in funding happened despite the Abbott/Turnbull/Morrison Government, not because of it.

The Gillard Labor Government entered into the National Health Reform Agreement with the States in 2011.  Under the NHRA public hospital funding would be based on hospital activity levels, and a national efficient price set by the Independent Hospital Pricing Authority (IHPA).

The Commonwealth agreed to pay 45 per cent of “efficient growth” (meaning 45 percent of the price increase for the base level of hospital activity, and 45 percent of the costs of increased activity) until 2017, and 50 percent thereafter.

In the 2014 horror Budget the Government decided to tear up the funding formula included in the NHRA, and index Commonwealth public hospital funding from 2017-18 onwards by population increase and CPI. The Treasury claimed that this would save $55 billion over ten years to 2024-25.

It is fair to say that this decision was one of the more stupid ones included in the Budget. Total hospital costs are affected by population ageing as well as population growth, and health price indices have historically increased faster than CPI. Ignoring these factors in the funding formula effectively shifted these costs to the States, and the States were vociferous in their condemnation of the measure.

When Malcolm Turnbull became Prime Minister in September 2015 he set about dealing with some of the suppurating wounds lingering from the 2014 Budget.

He put forward a proposal accepted by the States at COAG in April 2016 which restored much of the NHRA architecture, but with the Commonwealth contribution to efficient growth set at 45 percent, and with a cap of 6.5 percent on the annual growth in the total Commonwealth contribution. These arrangements formed the basis of the amended NHRA agreed in 2020.

The second thing to say is that the NHRA formula was intended to increase the share of public hospital costs met by the Commonwealth. Since the inception of Medicare there had been a tacit understanding across the Federation that the costs of public hospitals would be shared 50:50.

However, by the time the Labor Government took office in 2007 the Commonwealth share had reduced to about a third.

The short-lived National Health and Hospitals Network Agreement (2010) and the NHRA were both intended to increase the share of Commonwealth funding over time.

The National Health Funding Body data shows that the Commonwealth share has increased from 36.5 percent in 2012-13 to 40.5 percent in 2020-21. This increase is consistent with the underlying design of the NHRA, and does not indicate a failing on the part of the States.

The States’ claim for additional funding now is at least partly justified because of the way activity-based funding under the NHRA works. The IHPA classifies and costs hospital activity based on data collected several years ago. For example, the national efficient price for 2021-22 set by the IHPA in March is based on data collected in respect of 2018-19.

The effect of COVID-19 on underlying hospital cost structures will begin to emerge in data for 2019-20 and will not be fully apparent until 2020-21 – meaning it will be fully incorporated in the national efficient price for 2023-24. I think everybody involved in the health sector is hoping the impact of COVID-19 will have diminished by then.

Of course, the States have a strong argument that the impact they are now feeling on their health systems is the direct result of the Commonwealth’s failure to implement a robust quarantine system and its tardy implementation of the vaccination program.

If the current levels of vaccination had been achieved in July, the current wave of infections would have been considerably reduced. The States should not be expected to pay 60 percent of the additional health system costs resulting from a Commonwealth failure.

And the Commonwealth’s argument that it doesn’t have to pay more now because it has increased its funding by 71 percent in the past is disingenuous at best. It is still only paying a little over 40 per cent of the cost of what should be a joint endeavour.

PrevPreviousWhat do we want and when do we want it? Young people call for a real say in health reform
NextHealth workers are among the COVID vaccine hesitant. Here’s how we can support them safelyNext