Home Global health and climate change Behind the headlines: some useful links and background on Zika virus 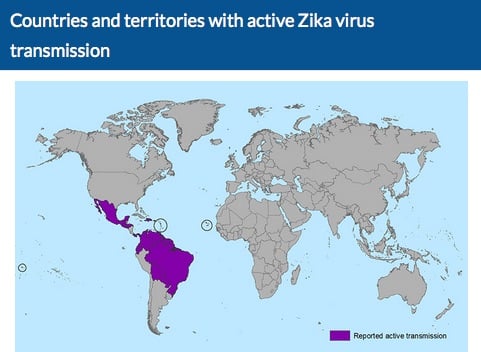 Behind the headlines: some useful links and background on Zika virus

With the Zika virus making headlines around the world,  below are some useful links and background information.

The Federal Health Department is providing information for clinicians and public health practitioners here. It notes that the situation is evolving rapidly and that updates will be provided.

CDC updates on areas with ongoing Zika virus transmission are available online.  You can sign up here to receive email updates from the CDC.

In Australia, the Doctor Portal has “Seven Questions Your Patients Might ask About the Zika Virus”.

WHO declares a Public Health Emergency of International Concern.

On February 1 2016, after convening a committee to advise the WHO on the severity of the health threat posed by Zika virus, WHO director Margaret Chan declared that the cluster of microcephaly cases and other neurological disorders associated with the virus constituted a Public Health Emergency of International Concern.

The WHO has called for “A coordinated international response … to improve surveillance, the detection of infections, congenital malformations, and neurological complications, to intensify the control of mosquito populations, and to expedite the development of diagnostic tests and vaccines to protect people at risk, especially during pregnancy” but has not recommended restrictions on travel or trade.

According to this in the Guardian, the declaration opens up the way for much needed funding, both to control the spread of the virus and establish if the link between Zika virus and microcephaly is causal. As this article from the CDC and this one from Scientific American explain, further research, including case control studies, will be needed to clarify the link.

In the meantime, with mosquito control in affected areas still the mainstay of disease control, several commentators have raised concerns about the practicality and repercussions of the advice to women in some countries to avoid pregnancy, including in this interesting article at the Conversation

Below, we republish an article from The Conversation by the University of Sydney’s Dr Cameron Webb (AKA @mozziebites), Does the Zika Virus pose a Threat to Australia?

They’re small, spindly insects but their threat never dwindles – the bites of mosquitoes threaten death and disease in many parts of the world. The emergence of a little-known virus, Zika, from an African forest, is the latest to alarm the public, politicians and health authorities because of its potential link to birth defects.

What is Zika virus?

Zika virus is a mosquito-borne virus closely related to dengue and Yellow Fever viruses. Discovered almost 70 years ago in a Ugandan forest, the virus generally only causes a mild illness. Symptoms include rash, fever, joint pain and conjunctivitis.

Severe symptoms aren’t common and the illness was never thought to be fatal.

Despite detection throughout Africa and Asia, the virus rarely entered the spotlight of scientific research. It was overshadowed by the spread and impact of dengue and chikungunya viruses, which infect millions of people across the regions.

In the last decade, Zika virus outbreaks have occurred in the Pacific, with reports of severe illness. But again, Zika was considered a lesser threat than dengue and chikungunya viruses.

Everything changed in 2015 when Zika virus reached the Americas.

Since the first local Zika virus infection, cases have been reported from at least 19 countries or territories in the Americas, with more than one million suspected cases.

Rapid spread of an emerging mosquito-borne pathogen is news enough but people are also panicked by reports of more serious consequences of Zika virus infections, including post-viral Guillain-Barré Syndrome, an autoimmune condition where there person’s nerves are attacked by their own body.

Of most concern has been the rapid rise in rates of microcephaly, a birth defect which causes babies to be born with unusually small heads, in regions where Zika virus has been circulating.

While the role of Zika virus as the cause of microcephaly has not yet been confirmed, there is growing evidence of a connection between the two where pregnant women have been infected with the virus.

Babies born with microcephaly, and those who died shortly after birth, have tested positive for the virus, and there are close regional associations between clusters of birth defects and Zika virus.

There is enough concern for the Centres for Disease Control to issue health warnings to pregnant women planning to travel to these regions. Some health authorities are even advising people to postpone pregnancies.

There is no vaccine for Zika virus. Stopping mosquito bites is the only way to prevent infection.

Is Australia at risk of a Zika virus outbreak?

There is little doubt the virus can make it to Australia. There have already been a number of infections reported in travellers arriving in Australia from the Cook Islands and Indonesia.

Mosquito-borne viruses generally aren’t spread from person to person. Only through the bite of an infected mosquito can the virus be transmitted.

In the case of Zika, there have been some unusual cases of transmission, including through sex and the bite of an infected monkey. Despite these unusual circumstances, mosquitoes will still play the most important role in any local transmission.

While dozens of mosquitoes are capable of spreading local mosquito-borne pathogens, such as Ross River virus, only one of the 300 or so mosquitoes found in Australia can transmit Zika virus: Aedes aegypti, the Yellow Fever Mosquito, which is only found in north Queensland. 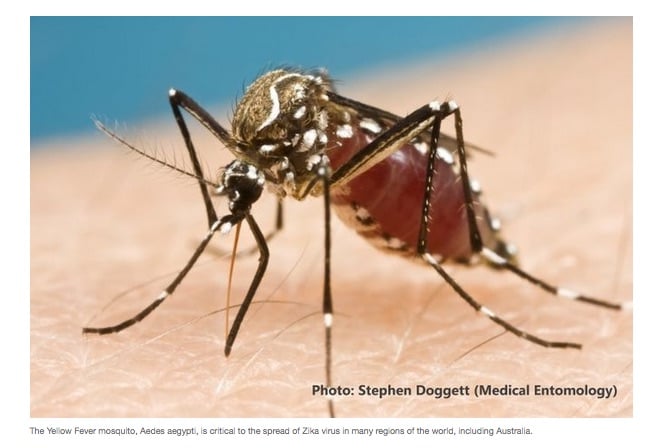 For local Aedes aegypti to spread Zika virus, they must bite an infected traveller shortly after they return from a country where the virus is circulating.

While the chances of this happening are small, there is then a risk of a local outbreak occurring as the infected mosquito bites people who’ve never left the country.

How to reduce the risk of transmission

Fortunately, authorities are well placed to contain an outbreak of Zika virus, as the required strategies are the same as management of dengue outbreaks.

Perhaps the real message here for Australian authorities is that they need to work diligently to keep exotic mosquitoes out of the country.

While Aedes aegypti may not become established in southern cities, even with a changing climate, there is great potential that Aedes albopictus, better known as the Asian Tiger Mosquito, could become established in southern cities. As well as a vector of Zika virus, it can spread dengue and chikungunya viruses and be a significant nuisance-biting pest. Keeping this mosquito out of our cities is critical.

Australians planning travel to South and Central America, including the Rio Olympics, should take precautions to avoid mosquito bites. Irrespective of Zika virus, mosquito-borne dengue and chikungunya viruses have infected millions of people, causing thousands of deaths, in the last few years and are reason alone to pack mosquito repellents. Be prepared to cover up with long sleeved shorts and long pants if in regions where risk is high. 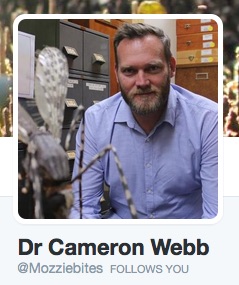 Cameron Webb and the Department of Medical Entomology, NSW Health Pathology, have been engaged by a wide range of insect repellent and insecticide manufacturers to provide testing of products and provide expert advice on mosquito biology. Cameron has also received funding from local, state and federal agencies to undertake research into mosquito-borne disease surveillance and management.