Being a racist or just saying stupid things? An invitation to journalists to consider the difference

An opinion piece titled ‘How racist are you?’ published last week in the Sydney Morning Herald by one of its journalists, Mark Sawyer, showed we have a long way still to go in Australia in our  understanding of racism and privilege.

In the post below, researcher Dr Naomi Priest looks at the issues the article overlooks or ignores. She issues an invitation to the author and any other interested journalist to attend an upcoming international symposium in Melbourne on the impact of racism on the health of children and young people.

See another response to the article from Fairfax contributor Ruby Hamad – ‘You’re probably more racist than you think‘, outlining “just six of the common tricks people use to justify racism without even realising what they are doing” – and, at the bottom of this post, some of the Twitter reaction to Mark Sawyer’s piece.

The latest edition of the Medical Journal of Australia also has a timely special focus on Indigenous health, in the context of this ongoing debate and particularly given the cutbacks announced in the recent Federal Budget.

It features an article asking how journalism might learn from health care to improve Indigenous health outcomes. Coauthored by Melissa Sweet, Patricia Dudgeon, Kerry McCallum and Matthew Ricketson,  it says:

This would result in increased awareness of institutionalised racism and concerted efforts to ensure greater representation of Indigenous peoples — whether in newsrooms and media management, or as sources in stories, including and beyond those directly related to Indigenous affairs.

It would encourage a reframing of journalistic work towards more emphasis on solutions-focused reporting, and coverage that humanises, rather than portraying Aboriginal and Torres Strait Islander people as “the other”.

Last week Mark Sawyer wrote in the Sydney Morning Herald that “it seems counter-intuitive and frankly crazy to label people racist on the basis of one or two remarks” and that he “walked past it when people assert that Australia is a uniquely wicked racist country. Get real.” He argued that “people can say racist things because they are afflicted, temporarily or permanently, with stupidity, but that doesn’t make them a racist.”

The article drew a swift response  on social media with many criticising  Sawyer and SMH deputy editor Ben Cubby for minimising the considerable impacts racism has on those who experience it, as well as for their narrow understandings of racism centred solely on intent and on extremism.

Expressing shock, offence, and disbelief, social media responses reminded the Herald  of the often implicit nature of racism in the form of unconscious biases and stereotypes, and of the need to acknowledge historical and contemporary issues of power and privilege embedded within the systems and institutions of society in order to truly consider the complex expressions and forms of racism.

A letter to the editor by Race Discrimination Commissioner Tim Soutphommasane, published the next day, delivered a similar rebuttal:  he argued that ‘racism is as much about impact as it is about intention’, and highlighted that malice, hatred or doctrinal commitment aren’t necessarily requirements for racial prejudice or discrimination. 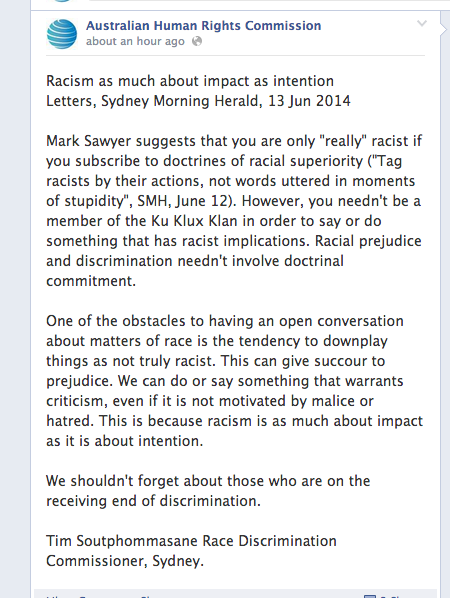 Further challenge to Sawyer’s views were expressed in a reflection by his Herald colleague Aparna Khopkar, in which she tells of her own personal experiences of racism as a primary school student and her persisting feelings of shame, humiliation and infuriation into adulthood as a result. As she writes

“…letting people off the hook for their stupidity ignores the impact their words have on those to whom they are directed.

It ignores the ever present mentality that being from a non-white culture in Australia is to be “other”.

It allows the structural effects of racism to fester on, and the harmful effects of unconscious race discrimination to continue.

It ignores the long history of racism, oppression and discrimination that are a part of the world’s and Australia’s history from which these “stupid” comments stem.

It allows people to continue telling the victims of racist outbursts to “toughen up” or “get over it” instead of insisting that the perpetrators take responsibility for what they’ve said and how it’s affected someone…You might be able to write it off as an idiotic remark, a momentary lapse,  but for me, it’s a humiliating and infuriating moment to add to a pile of similar ones I’ll remember vividly, whether I want to or not.”

These responses echo current research that highlights the increasing prevalence of experiences of racism in Australia, as well as the resulting substantial health and wellbeing impacts on both adults and children (see our systematic review, and further links below). Recent research among Australian primary school students suggests many continue to have similar experiences in their everyday lives as  Khopkar described. This is not an issue of the past, nor one to be minimised as one-off stupidity or ignorance.

Yet, still, ongoing denial of racism as well as its minimisation – with the disclaimer: ‘it depends how you’re saying it’ – have also been described as persistent in recent Australian community based research among those from majority cultural backgrounds:

Everyday racism is still often considered ‘just a joke’ that shouldn’t be taken too seriously and those who  speak out against such ‘jokes’ or comments are accused of political correctness or over-reacting.

Addressing racism and prejudice requires multiple strategies across multiple settings, with a critical element of challenging such views and behaviours involving education about the harms, especially cumulative, of these kind of micro-aggressions. Reflection on systems of power and privilege as they have operated historically and continue to be perpetuated in contemporary society is also required to contextualise understandings of how a ‘joke’ or comment can be so harmful.

International evidence tells us that  issues of racism do indeed matter, and that such comments should not be dismissed or excused as stupid or ignorant. On the contrary, racism needs to be prevented and challenged because of its serious and persistent negative impacts for children and young people throughout their lives. These include poor mental health, chronic disease and physical health, behaviour difficulties, and poor educational, social and economic outcomes. This leads to substantial personal cost to individuals, as well as to families, communities, and society as a whole.

We are hosting an international symposium next week that aims to have  an open conversation about these critical issues of race and racism and their impact on health. This conversation seeks greater understandings of the complex expressions and impacts of racism as experienced by our children and young people, as well as in depth exploration of creative and courageous solutions to countering such racism and its multiple harms.

We would welcome attendance by any journalist interested in joining this conversation.

VicHealth: Racism and its links to young people’s health 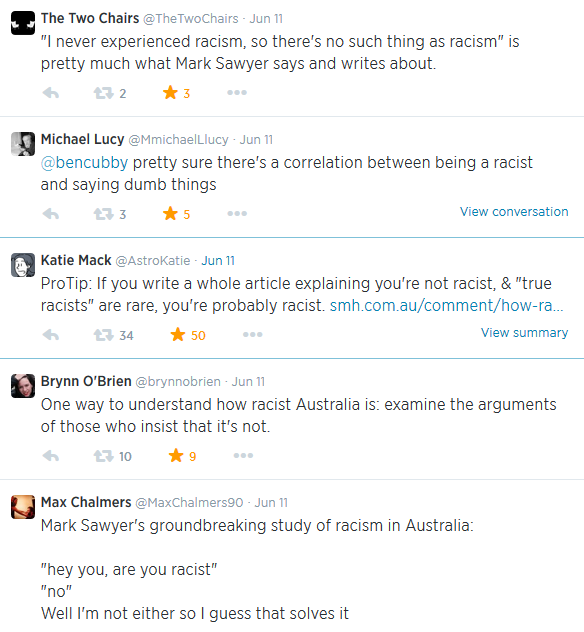 The Herald’s deputy editor said he would welcome articles in response to the piece:

PrevPreviousPutting prostate cancer screening on trial: an invitation to join a community jury
NextCan the GP co-payment debacle be fixed?Next