Recent headline-attracting estimates about the level of government spending on Aboriginal and Torres Strait Islander people need to be put in context, according to the ANU’s Professor Jon Altman.

In the article below, Altman critiques the Productivity Commission’s 2012 Indigenous Expenditure Report, and suggests that it fails to address questions that could usefully inform policy and spending.

The article was first published in the September edition of Tracker magazine, and is cross-published with permission.

On 4 September 2012 the Productivity Commission released its 2012 Indigenous Expenditure Report on behalf of the Steering Committee for the Review of Government Service Provision. In a massively complex and convoluted exercise, an attempt is made to estimate expenditures provided to Aboriginal and Torres Strait Islander peoples by Australian and State and Territory governments for the fiscal year 2010–11.

As I read the latest report in the emerging evaluation of Indigenous Australians industry, Richard Bell’s insightful theorem, Aboriginal art—It’s a white thing! kept recurring in my mind: Black expenditure too, it seems, is a white thing.

The Report, to give it due credit, uses careful language—total direct Indigenous expenditure is estimated by the Productivity Commission at $25.4 billion in 2010–2011, 5.6 per cent of total direct government expenditure of $451 billion.

This estimate is then divided by the estimate of the Indigenous population at June 2011 of 575,000 to give an estimated per capita figure of $44,128.

This figure is compared with $19,589 for other Australians with the differential mainly allocated to greater need (66% of difference) and additional cost (34% of the difference).

In the media release accompanying the tome (of 327 pages), in its Foreword provided by Gary Banks AO Chairman of the Productivity Commission, in an entire part of the Report and in a series of web-based documents, some care is taken to emphasise that the estimates only represent best collective effort and hence should be interpreted with due consideration to the many caveats highlighted.

At the same time, Banks suggests that the Report can contribute to better policy making and thus improved outcomes for Indigenous Australians; he suggests that combined with other data, that are unspecified, ‘the estimates provide the basis for acquiring a better understanding of the adequacy, effectiveness and efficiency of such government expenditure’.

At face value, it is not surprising that in June 2009 the Council of Australian Governments decided that estimates are needed on what is spent on services which support Indigenous Australians. This is mainly because in 2008 COAG endorsed a general framework, that constitutes the current dominant policy paradigm, to ‘Close the Gap’ between Indigenous and other Australians. This is a proposed technical statistical solution to deeply-entrenched Indigenous disadvantage that will require the deployment of many dollars to address. The governmental logic is big gaps need (a mirage of) big dollars to deliver future big outcomes. If only it were that straightforward.

The gaps have been defined since 2003 in a series of biennial reports also produced by the Productivity Commission called Overcoming Indigenous Disadvantage: Key Indicators. The latest report, released in 2011 and totalling 830 pages, shows that in a few areas gaps are narrowing, but that in many, outcomes are either not improving or deteriorating. Under these circumstances, the summary statement that there is still a considerable way to go to achieve COAG’s commitment to close the gap in Indigenous disadvantage reads like a politically correct understatement, particularly as the aim is not to close, but to half close, most gaps to varying future time frames.

So if the Indigenous Expenditure Report could assist governments to target expenditures at areas of greatest need, or in a manner that ensures greatest efficiency and effectiveness, even at a very general level, or if it could tell us something about the adequacy of the spend it would be a very valuable investment—although no estimate is provided of what this complex statistical exercise cost.

But these are precisely the sorts of questions of policy significance that the report tells us, very explicitly, that it cannot answer:

This suggests to me that the report’s terms of reference might be asking the wrong questions. Instead of saying this, as the Australian government’s independent research and advisory body on a range of economic, social and environmental issues affecting the welfare of Australians, the Productivity Commission tries to provide the best collective intergovernmental answer—code for face-saving and risk spreading.

This raises important questions about what political purposes are being served by this report.

One answer is provided by going to the headlines in the nation’s most influential mass media outlet The Australian: from 4th September ‘Aboriginal split: 5.6pc of funds, 2.6pc of population’ (pc in this case refers to % not political correctness) ; and ‘Indigenous spend topping $25bn: The question is has the two-year surge benefited the 575,000 people?’ ; and from 5th September ‘Scullion calls for an audit of $25bn’.

Nowhere is there any mention that this is a crude estimate of Indigenous expenditure not actual expenditure on Indigenous people; nor that any comparison with the figure for 2008–09 is meaningless owing to different methodology.

Minister Macklin in defending this supposed extravagant spend of $44,128 per capita suggests it is justified owing to higher levels of Indigenous disadvantage, forgetting to debunk the fiction that it is an actual spend, at once seeing political mileage in such high figures and at the same time perhaps embarrassed that COAG is responsible for commissioning the Report, a commission which is itself an identifiable Indigenous specific expenditure.

The call by Senator Scullion, Opposition spokesman for Indigenous Affairs, for an across-the-board audit of Indigenous spending by all commonwealth government departments ignores the Report’s explicit statement that it does not provide any breakdown by individual departments and that only 45 per cent of the estimate can be sheeted home to the Commonwealth. A more pertinent audit of all $451 billion spend by all governments on all Australians might be needed; but that might expose the convoluted nature of the task whatever citizen group is concerned.

All the while the Productivity Commission remains silent, no corrections, no letters to the editor, no op eds; and so it lends moral authority to the media nonsense and damages its reputation for credibility and independence.

Gary Banks laments that data and methodological issues still need to be resolved but precisely how remains unclear.

A robust conceptual framework, in my view, would encompass three inter-linked and inseparable elements: historical legacy, current need, and future investment.  It is to such a framework that the undeniable capacities of the Productivity Commission should be deployed.

Historical legacy encompasses a series of backlogs that need to be quantified and include shortfalls in both physical capital, such as housing and infrastructure and human capital, such as endowments of education and health.

Current need is referred to in the Indigenous Expenditure Report as ‘greater need’, while future investment should identify the development assistance that Indigenous people might require to ensure their improved wellbeing acknowledging the diversity of their circumstances.

Because the Indigenous Expenditure Report only estimates Indigenous expenditure for one year 2010–2011 it lacks the conceptual capacity to engage with this more complex framing of Indigenous disadvantage.

Hence, for example, in looking at the past there is no sense of what capital, as distinct from recurrent expenditure, might be needed to address historic shortfalls in the provision of schools, hospitals, roads, housing and essential services.

And as the Australian government now insists that remote social housing is divested from community ownership to governments, it is arguable whether such housing should be viewed as Indigenous: after all the asset now belongs to the state and should be available to non-Indigenous as well as Indigenous tenants.

Similarly there is no distinction made between expenditure invited or desired by Indigenous people and that which is imposed. A clear example here is income management imposed on thousands of Indigenous Australians, recently estimated by the Parliamentary Library to cost $1 billion over five years.

What seems clear from this Report is that directly identified Indigenous expenditure is more effectively audited and targeted than the Indigenous share of mainstream expenditure. This raises important questions about the risk of the recent call by influential academic Professor Marcia Langton for the abolition of such expenditure, on the basis that Indigenous exceptionalism creates a sense of entitlement.

Most significantly is the absence of distinction in the Report between positive and negative funding. Estimates of direct Indigenous expenditure are divided between five broad areas called ‘building blocks’. Some building blocks, like early child development or education and training, are positive as future investment; others, such as expenditure on law courts, legal services and incarceration, are negative. Health care should also be distinguished in this way: preventative health expenditure differentiated from acute, chronic and palliative care. No distinction is made between positive and negative funding; both are quantified with a positive sign and so are summed undifferentiated as estimated Indigenous spend.

Even positive categories like economic participation bundle together positive and negative expenditures. For Indigenous Australians 77.4 per cent of estimated economic participation support is for social security support, which is lower than the 91.5 per cent for non-Indigenous Australians. Importantly, positive labour and employment services are generally Indigenous specific, while social security support payments are mainstream.

Unlike Gary Banks, I am far from confident that the Report will contribute to better policy making and improved outcomes for Indigenous Australians—as demonstrated already by the political posturing by Macklin and Scullion.

Indeed, given all the qualifications in the Report, it appears a conflicted and potentially self-serving self-assessment of worth—especially as estimate reliability is largely based on subjective assessment ranging from good to very poor by the Report’s authors. The assessments of Indigenous people are nowhere to be found.

All this takes me back to Bell’s theorem—who benefits most from the estimated expenditure on services provided to Aboriginal and Torres Strait Islander peoples?

One answer comes from early analysis of 2011 Census community profiles data for Indigenous locations: non-Indigenous Australians in these places have median individual income many times higher than for Indigenous people, as well as less over-crowded housing provided generally and inexplicably at lower reported rents.

In the up-and coming industry evaluating Indigenous disadvantage the Productivity Commission is emerging as the major player. Evidently, it does not matter if its publicly-funded work responds to many wrong questions and provides technically competent, but conceptually inadequate, answers.

It is unquestionable that the Australian state will always play a critically important role in supporting Indigenous Australians, just as it does in supporting all Australians with private and public benefits.

But increasingly Indigenous people are represented as recipients of highly abstracted, estimated public expenditures in the imagined quest to Close the Gap. And as Australian citizens are misled about how their money is being apportioned, new types of gaps emerge.

I might by loosely paraphrase the American historian Timothy Snyder from his book Bloodlands (2010) Europe between Hitler and Stalin, authoritarian regimes turn people into numbers …  these numbers need to be put into perspective … and it is for us as humanists to turn the numbers back into people. 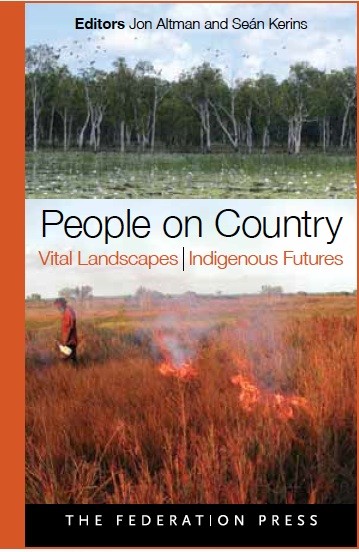 This book, edited by Jon Altman and Seán Kerins and titled People on Country: Vital Landscapes Indigenous Futures, hits the shelves this week, with launches being held in Sydney, Canberra, Melbourne and Darwin.