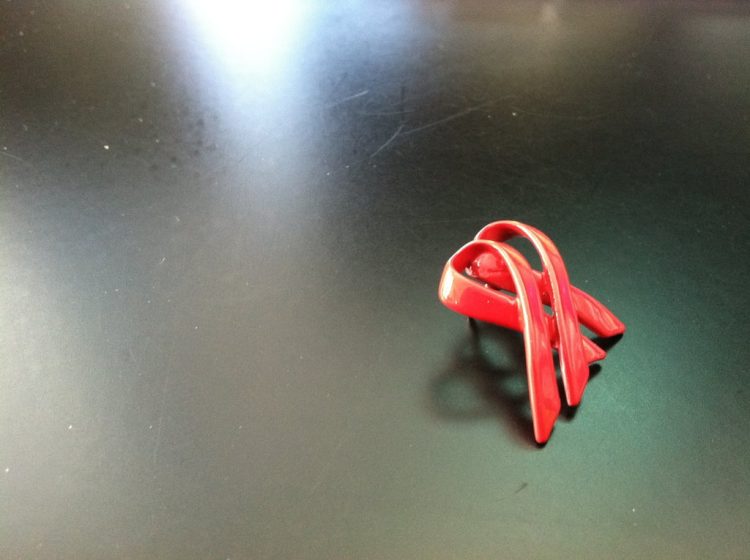 Beyond bricks and mortality: living with HIV in 2017

With the era of the Grim Reaper long over, is it also time to let go of the ‘bricks and mortality’ model of service provision for people living with HIV and embrace a new grassroots paradigm?

In this piece to mark World AIDS Day — adapted from an address to the recent Australasian HIV and AIDS Conference — HIV+ activist, queer man and ‘digital native’ Nic Holas documents the remarkable success of a new peer-to-peer movement in public health: living with HIV online.

In 2017, living with HIV online could be seen as just one aspect of what for many people is an increasingly online/digitised life. We shop online, we communicate digitally, we are entertained online, and we find sex, love, and romance via apps. So, when it comes to people living with HIV (PLHIV) seeking information, support, or community connections, it will come as no shock that we are finding all that and more on the internet.

The site I co-founded, The Institute of Many, or TIM, is now the largest digital gathering space for PLHIV in Australia, and indeed now boasts the largest membership of PLHIV of any member-based organisation in the country.

One of the reasons why TIM, and other grassroots examples like HIVsters, and of course across the serodivide, open groups such as PrEP’D For Change, PrEP Facts, and Prep Access Now, work is that we all go where people are instead of asking them to come to us. It’s the same philosophy that saw HIV testing and health promotion happen in gay nightclubs and sex-on-premises venues at the height of the crisis through to this day, and our use of Facebook as a permanently open digital Town-Hall-meeting-meets-peer-support has been incredibly effective.

We make a difference 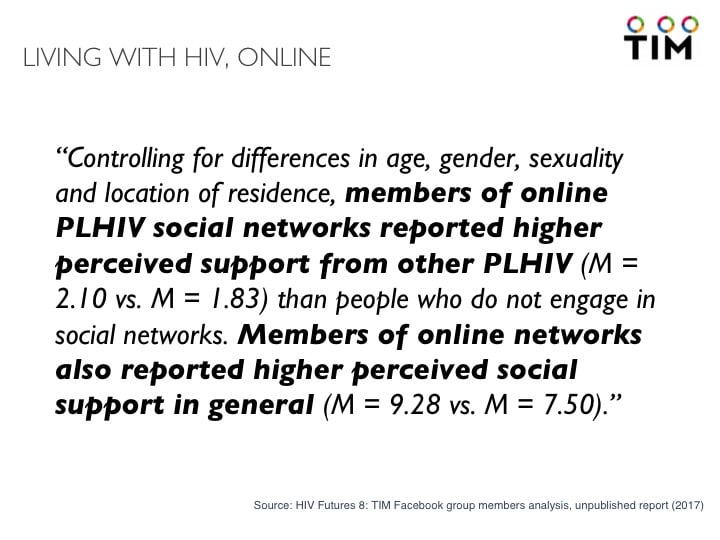 It’s important to distinguish between the types of support required by high-needs PLHIV and the broader, sometimes (but not always) younger, PLHIV community online. High-needs PLHIV still rely on services and support that an online group cannot provide. But what we clearly do provide are the highest levels of perceived support, which is vital in the building and maintaining of resilience — the antidote to stigma.

Demystifying the trials and tribulations of living with HIV might come down to something as simple as feeling as though you’ve not alone. This is not rocket science. In fact, it’s not any form of science, it is largely conjecture based on my observations within TIM, and looking back at physical peer support systems, or what I call the “circle of chairs” model of support.

Referring again to HIV Futures 8, the number one reason people gave for connecting online with other PLHIV was “hearing about other people’s experiences”.

We’ve seen that this is indeed the case at TIM. Over the 4.5 years that the group has run, the sharing of personal stories or experiences — be they positive or negative examples of PLHIV lived experience — consistently appear in the most popular content. 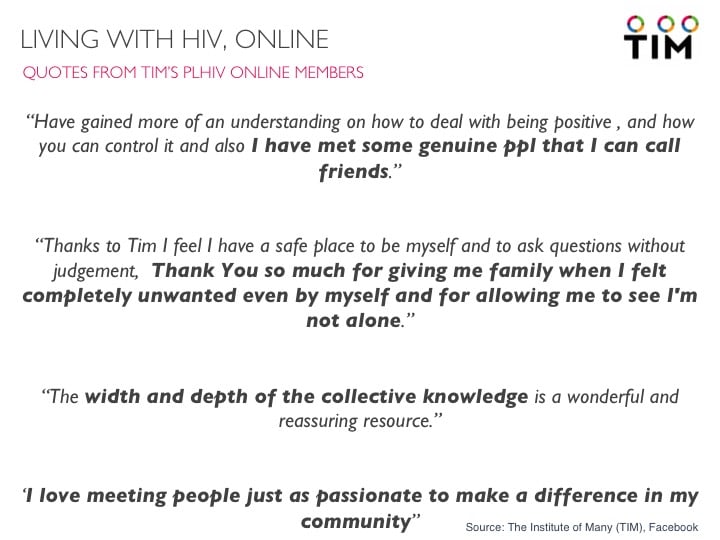 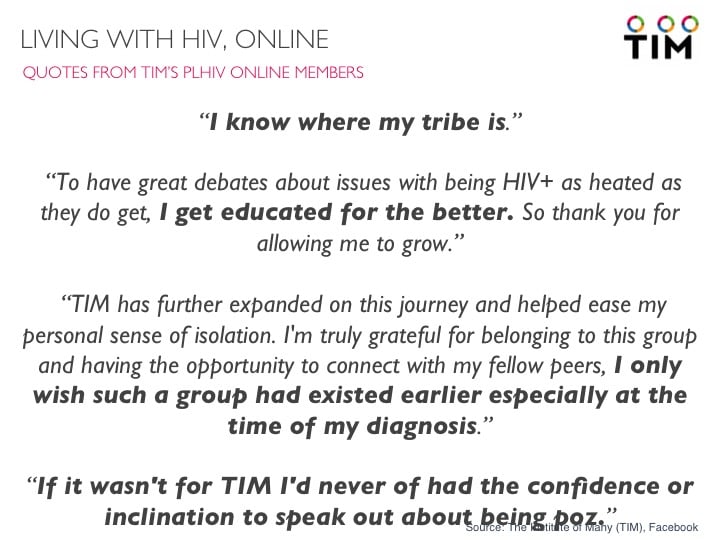 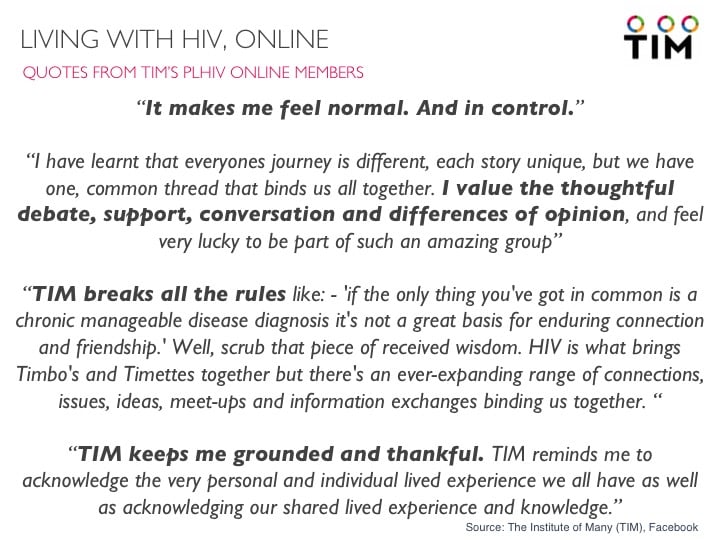 Living with HIV online should, for all intents and purposes, be just like living online: popping up in our news feed alongside the dozen or more other special interest pages or groups we connect with.

Isn’t that what living with HIV in 2017 should be: just one aspect of who were are, instead of our entire identity?

The way in which HIV+ people connect with each other, find support, build resilience, and flourish has changed somewhat in recent years. This has run parallel with extraordinary changes over the last few years in the way PLHIV access treatment, live more openly, and have greater confidence in the science of treatment as prevention. None of this would have been possible without a remarkable joint effort from funded organisations, grassroots movements, and researchers.

However, what we define as service provision, support, and peer-based organisations — all vital in the fight to end HIV and HIV stigma — are shifting faster than national strategies, funding arrangements, and health ministries can keep up.

In a way, the writing has been on the wall for some time. What is the difference between the decline of bricks and mortar industries, and the decreased value of the “circle of chairs” model of peer support? HIV Futures 8 has clearly shown the higher levels of perceived support PLHIV receive are from these informal, independent movements like TIM.

This is, of course, an imperfect scenario. Not only for the funded PLHIV organisations who are dealing with ever-shrinking budgets and ever-shrinking membership engagement, and whose impact is tied to the historically impressive but increasingly distant AIDS epidemic era. Now, in a new millennium, younger and/or recently diagnosed PLHIV might be resistant to this “bricks and mortality” model.

It’s also imperfect for the increasingly marginalised, high-needs PLHIV whose needs peer-led, largely online interventions do not and cannot meet.

In recent years, we have seen the funded PLHIV/AIDS council organisations attempt not dissimilar (though much more heavily funded) digital interventions that have not matched the success of TIM and other online equivalents.

This pivot towards online community and capacity-building should concern the HIV sector. Why is it that independent online movements such as TIM are outperforming funded organisations with arguably better institutional memory and understanding of state and federal policy, PLHIV behaviours, and HIV treatments?

The independence and relative instability of online movements like TIM and others is a valid concern. All rely completely on contributions of volunteers at every level; most are driven by individuals or small groups of PLHIV, not unlike the origin stories of their funded AIDS council and PLHIV peak body counterparts. We ask you to just trust us as we operate a 24/7 digital drop-in centre for PLHIV, and write the rules on our own terms.

Some competing bodies within the funded HIV sector seem more concerned with staying alive and maintaining their legacies, than with the actual needs of the majority of PLHIV. Instead of encouraging leadership development, we’ve been told it’s irresponsible to increase the capacity of the next generation of PLHIV activists because there aren’t enough jobs. When we go off and create new, dynamic movements that respond in real time to PLHIV needs, we are branded competitive threats.

For the first time, HIV Futures 8 conclusively points to what we in the independent grassroots space have known for the last few years: much of PLHIV community has moved online and moved on.

It’s now up to the broader sector to keep up.

Nic Holas is co-founder of The Institute of Many, and writes about queers, HIV, human rights and sex