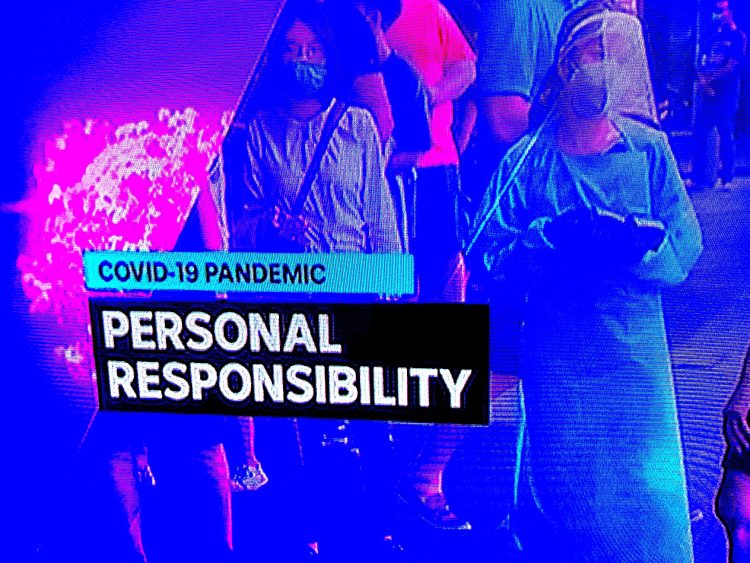 Beyond ‘laissez-faire’: what can Australia learn from other countries on COVID?

Below are two articles making suggestions about how to improve COVID management in Australia, drawing on lessons from elsewhere.

The first reports on a seven-point plan put forward by experts in the United Kingdom, while the second compares COVID control strategies in Australia and Aoteaora/New Zealand, with the authors suggesting lessons can be learnt.

One of many mysteries about governments’ ‘laissez-faire’ approaches to the pandemic has been the apparent lack of regard and long-term planning for the impact on productivity and the economy of uncontrolled transmission, reinfections and increasing numbers of people affected by Long COVID.

ABC medical journalist Dr Norman Swan spoke this week with immunologist Professor Christopher Goodnow, who is now recovering from heart failure following a COVID infection. Amongst other things, their discussion highlighted the impact at an individual level – a leading scientist’s productivity has been affected, for who knows how long, despite the protection of a fourth dose of vaccine.

Another mystery is why, after longstanding complaints about mixed and inappropriate messaging to the general public, governments are by and large still doing poorly on this. Rather than role modelling, too often they have been undermining public health advice encouraging use of high quality masks and other vaccine-plus strategies. 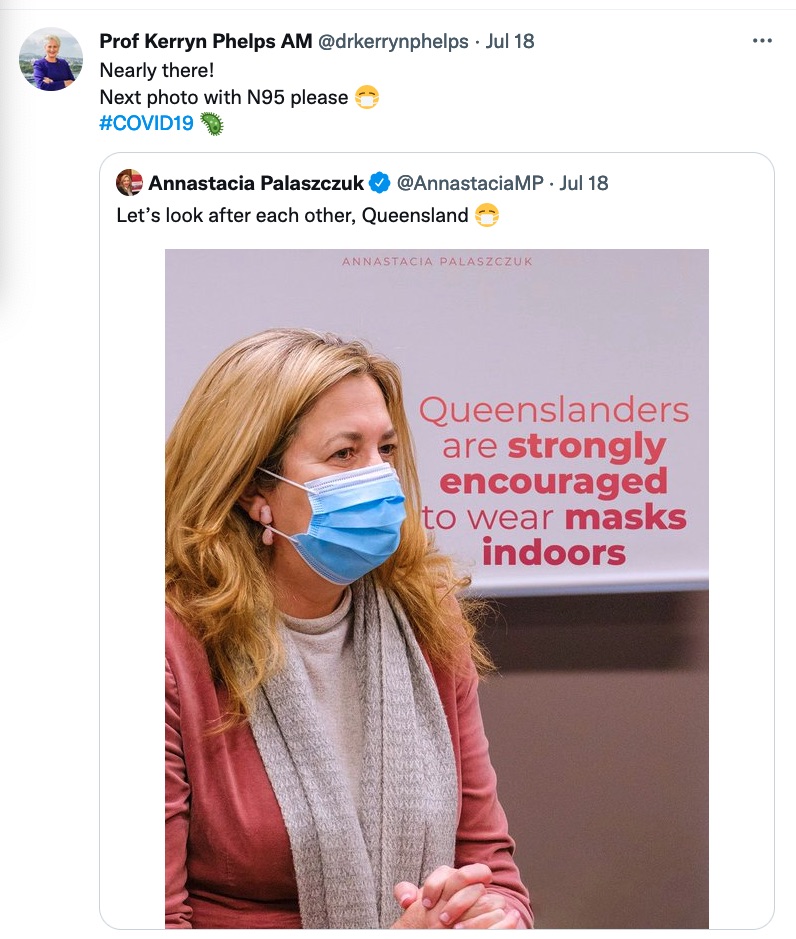 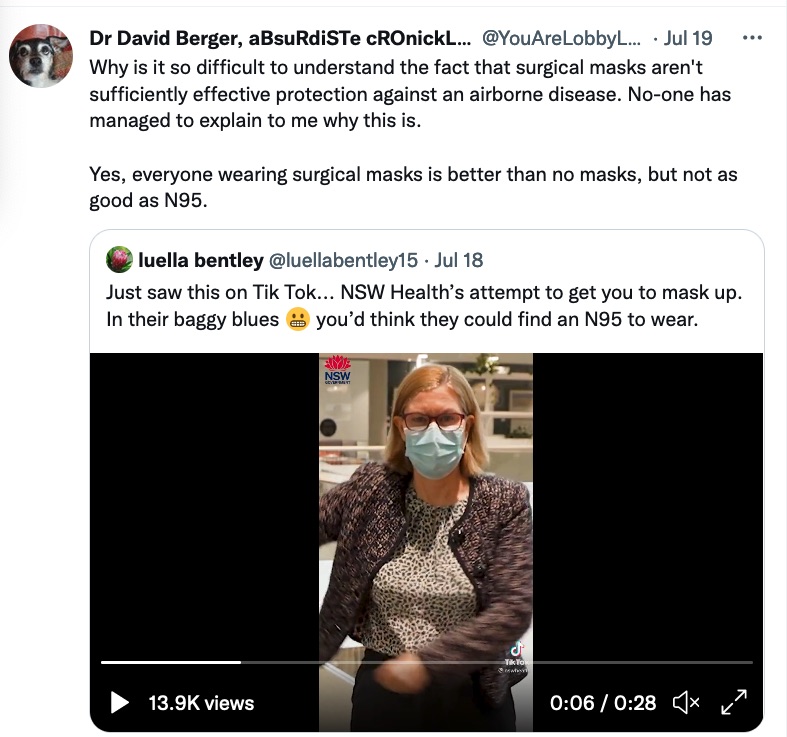 As Professor Stephen Duckett from the University of Melbourne wrote in The Conversation recently:

Public health messaging over the past six months has been woeful. Political leaders are sometimes seen in masks, but mostly not.

There has been little messaging about third and fourth doses, and so we have poor third-dose rates, despite what we now know about vaccine waning. The “Omicron is mild” message has led to a “no worries mate” insouciance among the public.”

“This will require a carefully planned transition from the discredited positions that have made a public response so much harder now than it was a year ago, and consistent positions across party lines that put the public’s health ahead of cheap political shots,” he said.

“Leaders need to adopt a more nuanced approach to responding to COVID, jettisoning the simplistic all-or-none dichotomy. Finally, the mainstream media also need to resile from their knee-jerk rejection of any public health action as akin to lockdowns and economic catastrophe.” 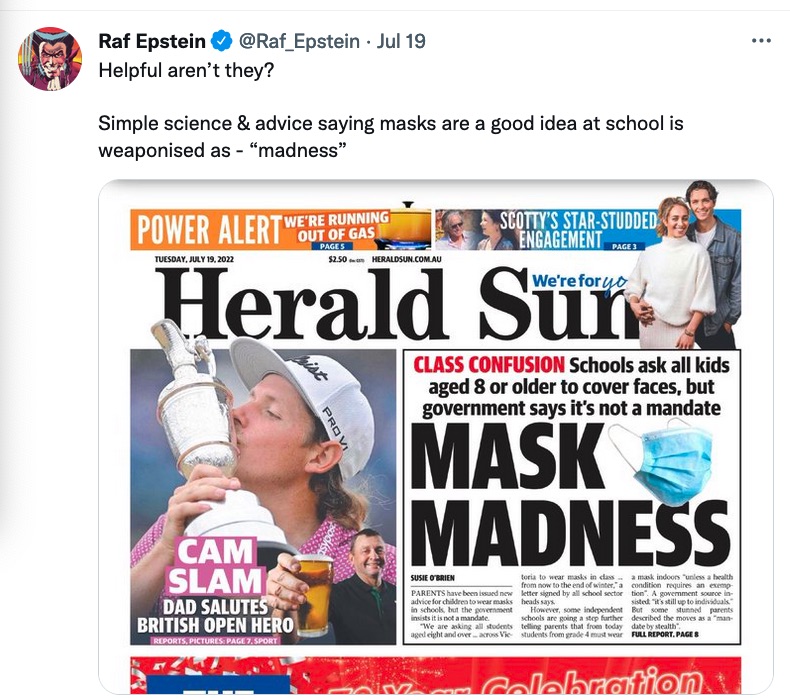 This Tuesday, 19 July, marked a year since “Freedom Day” in the United Kingdom when the Government removed remaining COVID protections, shifting to an emphasis on “personal responsibility” and “living with COVID”.

Writing in the BMJ this week, the Independent SAGE group says the result has been predictable, with levels of infection and hospital admission staying consistently high over the past year, causing massive disruption to peoples’ lives, the health service, and to the economy through staff shortages.

“Finally, long COVID is likely to have a severe long term impact on both individuals and the economy,” they say.

Particularly hard hit are disadvantaged communities, rendered even more disadvantaged with each wave through a combination of higher exposure, poorer pre-existing health, and lower levels of vaccination, say the experts.

Clinically vulnerable people and their families are limited in their ability to participate in public life because of the risks they face if infected, an ever present threat during continued periods of high prevalence.

“If implemented, these measures will make it possible for people to make informed decisions that will reduce the risk of illness to them, their families, and the communities in which they live and work,” says the group. “By reducing infections they will also reduce the disruption to the lives of individuals and society.

New Zealand, Australia and many countries are experiencing a further Omicron wave driven by the latest BA.4/BA.5 subvariants. Our response to this threat is remarkably laissez-faire compared with past approaches, as society has pivoted more to “living with the virus”.

But in both New Zealand and Australia, there’s a real risk current policy settings will be insufficient to prevent health services being overwhelmed – and more will need to be done in coming weeks.

We might squeak through under current policy settings if many more of us get vaccinated, wear masks, and isolate well when sick.

So, how do New Zealand and Australia compare on key policy settings?

Free masks? And what kind?

New Zealand: Free masks for all in Aotearoa – available from testing centres, marae (Māori communal meeting ground) and community centres, and provided directly to schools. Some 16 million surgical masks have been distributed in the last two months, as well as 3 million N95 masks (the latter to high risk and vulnerable people).

Australia: free masks are occasionally distributed to certain groups (for example, some schools might have them). But access is extremely variable. (Also, one of us – Tony Blakely – has been in both Australia and New Zealand in last ten days, and can report mask wearing is much higher in New Zealand.)

Australia: the federal government will not extend free rapid antigen tests for concession card holders past July 31. New South Wales and Victoria make RATs available for free for some under certain circumstances. But nationwide, access to free RATs is variable and limited. (One of us – Tony Blakely – received four free RATs on arrival in New Zealand, and zero on arrival in Australia.)

Accessing antivirals (and do you need to go to the GP)?

There are two oral antivirals available in both countries: Paxlovid and Lagevrio.

Both are effective at preventing disease progression (for example, stopping you ending up in hospital) if taken within five days of symptom onset.

New Zealand: available to higher risk groups – access has been expanded from 2% to 10% of cases. Available by prescription from GP and directly from pharmacist. No cost if you’re eligible.

Both countries are gradually widening access. Differences in one point in time may not be present in a few weeks. That said, as of mid-July 2022:

Australia: primary course and first booster eligibility the same as in New Zealand. However, second booster encouraged for immunocompromised and all 50+ year olds, and available to 30-49 year olds if they wish. Free. Vaccines mandatory for some workers in some settings.

Australia: mandatory in aged and health care settings, on public transport and some other settings (but compliance is low).

Actual mask wearing is higher in indoor environments in New Zealand, based on direct observation in both New Zealand and Victoria by one of us – Tony Blakely – during July.

Australia: if you test positive for COVID-19 you must immediately isolate. However, the circumstances under which you can leave isolation may depend on which state you’re in. Household members in many places don’t have to isolate, as long as they have no symptoms.

Is either country getting it right?

Based on the above criteria, New Zealand is clearly “winning”. But getting policy settings right over the long haul is about more than just having the most favourable assessment on some selected (but important) criteria.

If the goal is to minimise hospitalisations, deaths and long-term illness, there is an argument for minimising infections by shifting from mitigation towards a suppression strategy.

Longitudinal studies are increasingly showing high rates of reinfection, which carry many of the same health consequences as the initial infection.

As the pandemic goes on (and on and on) we need to increasingly consider cost-effectiveness.

Giving out free RATs to all is a cost to governments, and carries sustainability consequences. Such interventions need to be effective and compared with alternative approaches.

These are complex decisions – and hard to quantify. We do not have a good enough crystal ball to know what is “right” now; we will, unfortunately, only know with the benefit of hindsight.

Tony Blakely is Professor of Epidemiology, Population Interventions Unit, Centre for Epidemiology and Biostatistics, Melbourne School of Population and Global Health, The University of Melbourne. He is contracted to Moderna for provision of vaccine effectiveness estimates for Victoria, and in discussions with MSD for evaluation of Molnupiravir effectiveness in the Victorian population.

Michael Baker is Professor of Public Health at the University of Otago, Wellington, New Zealand. He receives funding from the Health Research Council of New Zealand to conduct research on infectious diseases, including COVID-19.