Beyond the alarming headlines about bowel cancer in young people

Today we’ve heard a lot of noise about an “alarming” increase in bowel cancer in young people. But it’s been very difficult to make much sense of it all.

The ABC reported that:

Australian oncologists are warning that young people are developing bowel cancer at alarming rates. Figures collated by Bowel Cancer Australia over the past 20 years reveal the number of bowel cancer cases found in people aged between 20 to 34 has risen 64 per cent….

The Sydney Morning Herald reported that:

THE incidence of bowel cancer in young people has surged in the past decade, more than doubling in some age categories, but doctors have been unable to explain the increase. Analysis of data from the Australian Institute of Health and Welfare shows bowel cancer in men under 25 increased by more than 160 per cent in the five years to 1996 and the same period a decade later. In women of the same age, the increase was more than 75 per cent.….The same analysis, performed by Bowel Cancer Australia, shows an increase in bowel cancer rates of about 40 per cent for men and women between the ages of 25 and 34. Overall rates increased by about 12 per cent.

The Herald Sun reported that:

FATTY and processed food may be behind an alarming jump in the number of under 35s diagnosed with bowel cancer. The incidence of bowel cancer – and deaths – is rising more rapidly in younger people than in any other age group, Australian Institute of Health and Welfare data shows. Specialist surgeon Prof Graham Newstead said rates of the disease had increased 64 per cent in data collected from 2002-06 compared with data taken in 1992-96, the latest figures available. “This is more than five times the increase seen overall across all age groups,” the Bowel Cancer Australia spokesman said.

It is difficult for a casual reader to work out just how alarmed to be as a result of these alarming reports. No details were given about the absolute number of cases in young people, or the actual rates of diagnosis in young people – ie cases per 100,000 population, for example.

The Bowel Cancer Australia press release which seems to have generated all this coverage doesn’t help much. It doesn’t include such figures or provide any links to where they might be found.

You had to dig deep into the bowels of the release (sorry) to find a belated acknowledgement that bowel cancer – like most cancers –  is most common in people over 50. There also was presumably the reason for the timing of the release: Bowel Cancer Awareness Week (5-11 June).

So my next stop was the Australian Institute of Health and Welfare, whose publications state that death from bowel cancer is “relatively rare” before age 50.

Its 2010 overview of cancer states:

More details in the graphs below… 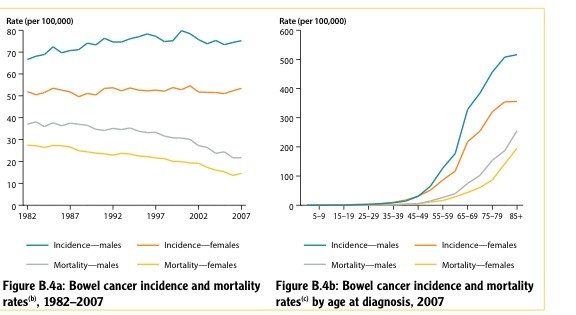 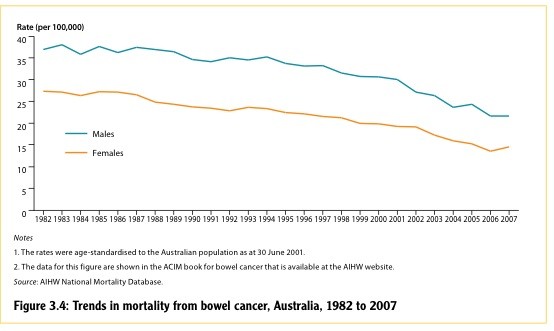 This still doesn’t answer my question about the absolute numbers and rates of bowel cancer in young people and how these have changed (Are we talking about five more cases in young adults every year? Or scores? Or hundreds?) But it does provide some broader context.

I sent Bowel Cancer Australia a tweet earlier today asking for clarification but have not yet heard back.

Of course, an increase in any cancer in young people is worrying. And the suggestion that this is an international trend sounds like an important story. But we can’t make sense of such concerns without better information about the extent of the increase.

If I hear more, I will update this post.

In the meantime, beware of headlines and experts who speak only in relative terms – whether they’re flogging products or sounding the alarm about a problem they want to highlight.

Meanwhile, Croakey readers have since helped provide some much needed context for this story…

Thanks to Mikaela (see comments below) who provided this data from AIHW:

Thanks to Perth GP Dr Brett Montgomery who provided this further analysis:

I too found it hard to interpret that press release and put all the figures in perspective.  So, I followed Mikaela’s suggestion on your blog to look at the AIHW data.

I decided to make a graph from the data looking at the trend over time in the proportion of people with newly diagnosed bowel cancer who are under 35.  Below is the data and the graph I came up with. 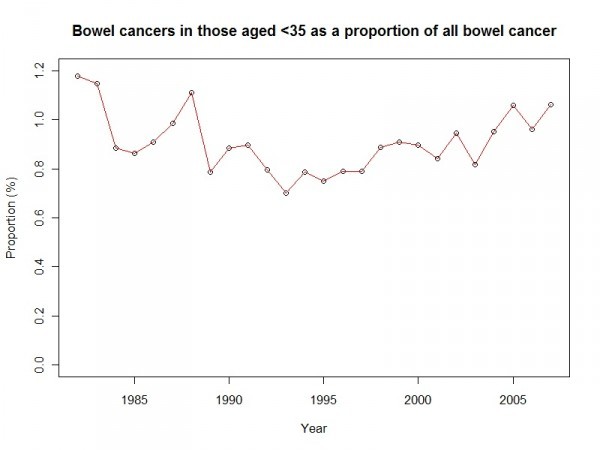 The graph seems to be at its lowest in approximately 1992-1997.  The proportion of bowel cancers occurring in young people seems to have increased since then, but not to a level out of keeping with historical patterns.  (I have included all the years for which data is available at ACIM – I haven’t cherry-picked a particular starting point.)

I don’t know if this graph demonstrates a true mid-90s dip in proportion of bowel cancers in younger people or if this appearance might all be due to chance.  You would need someone more statistically savvy than myself to calculate that.  However, I hope this graph might help put things in a useful perspective.

It is interesting that the authors of the press release chose the nadir of this graph as their baseline in their comparisons.  If they had instead used the period 5 years earlier, 1987-1991, their press release may not have captured the same media attention.

For me, one of the main takes from this particular story is the value of an informed and engaged audience – and this is not only something of value for media organisations.

PrevPreviousCampaign launched to support the campaigning Ken Harvey
NextMobile phones and cancer: assessing risk in a world of uncertaintyNext