Beyond the “homebirth horror” headlines: some wider questions for the health system (and media)

Yet another ‘homebirth horror’ story has hit the headlines of late, most notably on the Mamamia website.

A woman in Victoria, who had had two previous caesarean sections, researched her birthing options online when she next became pregnant and chose to have a homebirth based largely, the article states, on information found online that supported this option. Tragically, her baby died.

The article on Mamamia states its intention is to warn of the dangers of gathering information online that is not evidence-based.

While there is a disclaimer at the end of the story stating that the article was not intended to incite harsh judgments, the piece predictably unleashed a torrent of anti-homebirth commentary from the website’s readers.

‘Selfish!’, ‘putting the birth before the baby’ and ‘we live in a country with a great health system, why have the baby at home?’ captures the themes.

The piece was unhelpful at best, and at worst, a witch hunt. Ultimately, it airs even more non evidence-based information that will add to the complexity and confusion of the community. 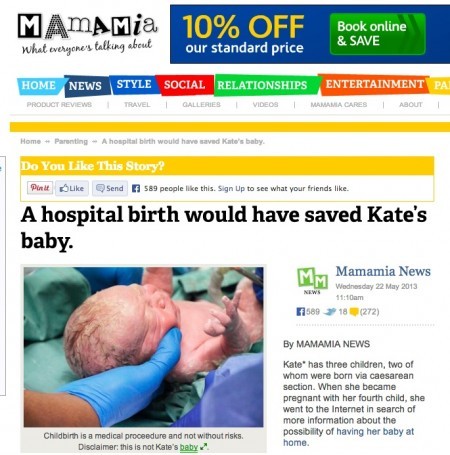 Mamamia should be commended for accomplishing worthy achievements on other important issues. The website was quick to seek evidence based information on vaccination and called in an expert to lay out the facts for readers.

Disappointingly, a genuine attempt to do the same for homebirth is lacking, and the website continues to take an angle which is anti-homebirth despite evidence to the contrary.

The website has failed on other occasions to provide a balanced view of homebirth. It has also published other articles with skewed views that are poorly supported by evidence such as this story on breastfeeding – Tara Moss thankfully corrected that imbalance.

The failure to reference the large body of evidence citing homebirth as a safe practice when conducted under optimal conditions is irresponsible and misrepresents a genuine, safe option for many pregnant women.

It also shows the limited understanding many have when it comes to homebirth. The facts are almost always distorted and crucial information that would give a true picture of the situation is absent.

A number of states and territories support homebirth in Australia. In NSW Health there is a Public Homebirth Policy Directive highlighting homebirth as a choice offered by the public health system. A number of appropriately networked public programs exist across NSW with more than 14 across the country.

In addition, there are many private practising midwives across the country providing safe homebirth services to women who are at low risk of complications in labour.

The ‘homebirth horror’ stories usually include women who have risks associated with their pregnancies. Usually these women feel that they have no option but to give birth at home.

Women who choose a homebirth in less than optimal circumstances arrive at that decision for a reason. Often it is a result of trauma, fear and previous negative birthing experiences in our hospitals – both public and private. These women’s experiences are sometimes doubted and dismissed.

Women often choose homebirth because they want services that the hospital system will or cannot provide. They might want services such as a birthing pool for labour and birth, continuity of midwifery carer and vaginal birth after a caesarean section.

Some women choose homebirth because the hospital system would not let them have a vaginal breech birth or give birth naturally to twins. Instead of accommodating these women in a safe environment, we leave them little option but to choose a homebirth, but then we vilify them if things go wrong.

A more helpful approach would be to take the time to examine the reasons behind women’s fears or their requests and try to better accommodate them in a calm, supportive space.

Rather than create a frenzy around each ‘homebirth-goes-wrong’ case that surfaces in the media, it would be more useful to explore why these traumatic experiences originally occurred and how could our health system better accommodate their needs and the needs of other similar women and families.

Where is the compassion for these women and how can women be supported in the future to avoid these events from reoccurring? Shaking heads and pointing fingers is a futile exercise in shaming grieving women who have lost their babies.

It’s also a missed opportunity to shine a light on ways we can make a good maternity care system into a great one where women feel supported to make safe choices, rather than leaving them to navigate their birthing options alone.

We acknowledge the principle of freedom of speech and an ability to publish as you see fit, as done by the Mamamia site, however if you purport to provide evidence based information on a range of topics, please include homebirth in the future.

• Karol Petrovska  is a Masters of Health Services student, UTS, and Caroline Homer is Professor of Midwifery at UTS.

• Homebirth study from The Netherlands

PrevPreviousAs the Earth approaches a critical tipping point, a reminder about why our biological wealth is critical for health
NextInternational Energy Agency report hopeful, but is it unrealistic?Next