Just how much should public health engage with Big Food to tackle obesity?  Canadian health research leader Professor Diane Finegood, CEO of the Michael Smith Foundation for Health Research,  led an initiative that provided “safe” (or private) spaces for Big Food to talk to public health – and says the results were surprising.

Marge Overs, Communications Manager at the Centre, reports below on Finegood’s address and the response to the keynote of Professor Sharon Friel.

See also some other Croakey posts about the issue:

FYI: The Australian Prevention Partnership Centre is a national initiative that is working to provide the evidence and tools for a comprehensive systems approach to preventing lifestyle-related chronic disease.

Public health should avoid “slinging rocks and arrows” at the food industry if it wants to tackle the complexity of the obesity epidemic, according to leading Canadian public health researcher Professor Diane Finegood. 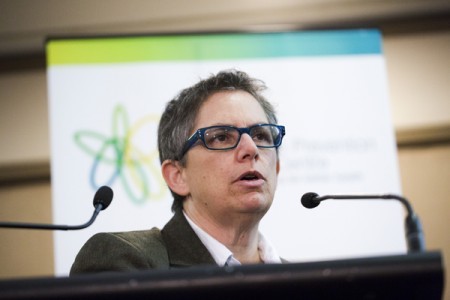 “I don’t believe we can change the food supply without working with the people who are responsible for the food supply. At the very least, we need to talk to each other and understand how each other works and not make assumptions,” she said.

“If we stay in our silos, I don’t think we’ll ever solve some of our major food-related challenges.”

Finegood described an initiative that she led  while scientific director of Canadian Institutes of Health Research’s Institute of Nutrition, Metabolism and Diabetes, which involved a series of workshops with representatives of academia, government, not for profit and the food industry, including Kellogg’s, Coca-Cola and Nestlé.

The Building Trust workshops aimed to provide a safe space to talk within and across these sectors to find common ground in tackling the obesity epidemic.

Finegood said some public health advocates would argue that the risk of partnering with the food industry outweighs any benefits, and that regulation is the only way to achieve the necessary change.

But she said the workshops, and her other dealings with the food industry, have taught her that public health’s relationship with Big Food is not a black and white issue.

Firstly, the food industry may be open to transforming their food portfolio to include healthier products, but they may need help to change consumer demand so they can remain profitable.

Another benefit is that public health can learn from the sales and marketing expertise of private industry.

Finegood gave the example of Kraft Dinner, one of the most widely sold packaged foods in the world. Kraft found that sales plummeted when they marketed a “low-sodium” version of the product, but by changing the labelling to “Hint of salt” the low-sodium version sold well.

‘That tells me that people in the food industry are very good at understanding marketing,” she said. “Health promotion researchers and practitioners don’t understand these issues at the depth that people in marketing do. If we build trust and enable conversations, at the very least we might learn from each other.”

For example, she said Campbell’s reduced sodium in some of its soups but had to add it back into some soup varieties because sales had dropped.

“A person in the food industry told me that this is anarea where they would benefit from regulation, because if there was regulation of sodium content, all producers would be on the same playing field,” she says. “So everybody’s product would taste a little different and the consumer would get used to it.”

“We need to find our bedfellows to tackle the obesity epidemic and to look more carefully for those bedfellows, because they’re sometimes in unexpected places,” she said.

Finegood said collaboration with a food company that distributed two million pedometers in Canada showed what can happen when public and private interests converge rather than conflict.

She described Canada on the Move, a novel public-private program collaboration to increase physical activity among Canadians.

Given that the population of Canada is only 30 million, the Canadian Institutes of Health Research (CIHR) saw it as an opportunity for research on this“natural experiment”. In collaboration with Kellogg’s and other partners, the CIHR established the Canada on the Move website, which was used to collect data on the impact of pedometer distribution.

Kellogg’s cereal boxes encouraged use of the website and both Kellogg and CIHR promoted the program and walking, through the slogan ‘Donate your steps to research’.

The impact of Canada on the Move was reported in a supplement in the Canadian Journal of Public Health, which said that message recall and awareness as well as ownership and use of pedometers increased over the campaign and coincided with promotional activity.

Finegood, who was a Scientific Director at the Canadian Institutes of Health Research at the time of the initiative, said it showed the potential of sales and marketing to change behaviour.

“We learnt a lot from engaging in that relationship,” she said. “Canada on the Move is an example where public and private interests converged.”

Not all foods (talks) are the same

In response, Professor Sharon Friel agreed that the public health sector should engage with the food industry – but she says not all food companies are worth a conversation.

Friel, Professor of Health Equity at the Australian National University, is leading an Australian Prevention Partnership Centre research project that is examining system factors, such as the relative lack of availability and affordability of healthy food compared with highly processed foods, that contribute to Australia’s growing diet-related health issues of obesity, diabetes and heart disease.

Friel says the food industry is diverse, with many companies producing nutritious food, but many also that produce “energy-dense, nutrient-empty foods”.

“I can see little point in engaging with a company like Coca-Cola because it produces a product that has no nutritional value – there is nowhere to go in a conversation about that product.”

“No. For example, internationally, the food manufacturers and retailers have dragged their heels on mandatory front of pack food labelling – widely regarded among public health nutritionists as the preferred health policy option,” she said.

“Based on that type of track record we don’t want them at the policy table, but we do want to engage with them in terms of the implementation of the policy.”