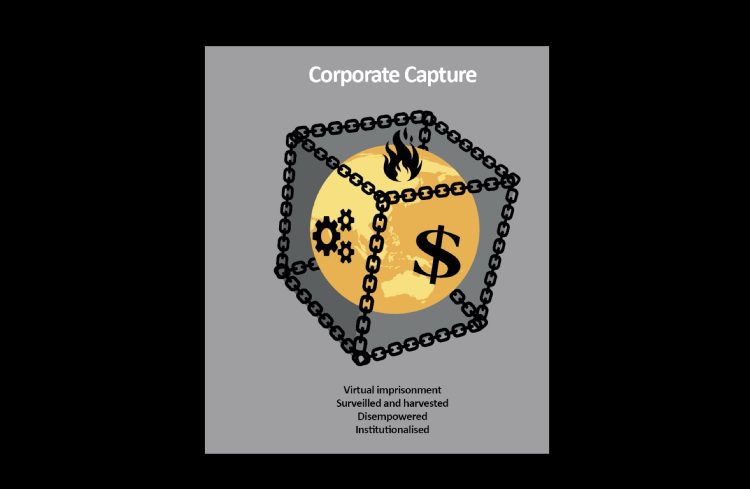 Introduction by Croakey: What are the pathways from the current unhealthy paradigm of “Big Tech corporate capture” to safe, healthy digital ecosystems?

Many suggestions were forthcoming at a #CroakeyLive event last week, held as a “working bee” to help inform future work, reports Marie McInerney below.

The event, which heard about the Centre for Responsible Technology’s Public Square Project on creating new public digital infrastructure “designed and run for the public interest”, came as five antitrust laws have been proposed in the United States to rein in the market power of the big tech companies.

When Facebook sought to ward off Australian regulation earlier this year, shutting down major Australian news sites and critical health organisations in the midst of the global COVID-19 pandemic and as the vaccination rollout was just beginning, Peter Lewis was sure there would be enthusiasm for an advertising boycott of the global tech giant.

“But so many organisations now are so reliant on Facebook to reach their audiences that it was like asking people to stop breathing,” said Lewis, director and founder of the Australia Institute’s Centre for Responsible Technology.

“You just couldn’t get any take-up on it,” he told last week’s #CroakeyLive webinar on digital platforms and public health.

Health promotion and social media consultant Kristy Schirmer echoed his concern at the event after having observed a worrying consensus in the social media community that Facebook’s “big tech tantrum” in response to Australia’s mandatory news media bargaining code was “totally justified”.

Their comments illustrate a lack of wider public understanding about the wide-ranging impacts of the monopoly powers of tech giants like Facebook, Google, Amazon and Apple.

Croakey editor-in-chief Dr Melissa Sweet told the event that ‘digital platforms’ sounds like such an innocuous term and is often used interchangeably with ‘social media’, but she is not convinced it is the most effective or accurate language “for the scale of the public health problem that we’re facing”.

“It’s become increasingly clear that the immense power of the digital monopolies affect our health in multiple interlinked ways, both upstream in terms of the political and policy environment and, more obviously perhaps, as vectors for dissemination of hate speech and misinformation and disinformation,” she told the event.

Yet, there is concern that these issues are not yet fully on the research and policy agenda for an already overstretched public health sector, nor recognised by the Federal Government, which did not ensure public health expertise informed a voluntary code of practice introduced to address online misinformation and disinformation.

Developed for and by the digital tech industry, the code was slammed as “pointless and shameless” by public health experts who have seen the failure of self-regulation in other industries, including food and alcohol.

The Australian Communications and Media Authority told Croakey this week it was “on track” to report to the Federal Government by 30 June on initial compliance with the code by signatories, the state of disinformation and misinformation and the code’s effectiveness, though it said “the public release of the report is a matter for government”.

Sweet said the scale of the public health risks posed by the tech giants had crystallised for her when reading the 2020 report of the US Judiciary Committee investigation into digital markets, which looked at the market dominance of Amazon, Apple, Facebook, and Google, and at their “upstream and downstream” drivers and impacts.

As well as all the harms of misinformation, disinformation, and hate speech, it found these companies used their dominant market power in ways that weaken democracy, erode diversity, entrepreneurship and innovation, degrade privacy online, and undermine the vibrancy of the free and diverse press.

The report noted a combined value of the companies at the time of more than $US5 trillion and predicted, within the next decade, they may be responsible for 30 percent of the world’s gross economic output, often through stifling competition and creativity.

As further example of that, last week Google agreed to pay France’s competition watchdog US$267 million after it found the search engine giant had “abused its dominant position” in the advertising market to unfairly prioritise its own products and services and discriminate against its competition.

For the public health sector, Sweet said, it’s about joining up the dots, seeing the platforms as “part of a wider corporate capture of the determinants of their health”, like the tobacco, food, alcohol and energy industries, with so much to be yet uncovered about how they are “shaping our environment and our potential to be healthy”.

Voices at the table

New research led by Noongar researcher Dr Tristan Kennedy last week showed that social media offers many benefits to Aboriginal and Torres Strait Islander peoples, such as ways to establish and navigate identity and build and maintain strong connections to family and community.

But it also found significant negative impact, with 97 percent of Indigenous people surveyed saying they experienced negative content on social media on a weekly basis, “grounded in ways of talking about Indigenous people and racist ideas that have pervaded Australian settler-colonial history”.

Concerned that the cultural subtleties of offensive content are not readily identified by non-Indigenous platform moderators, the research identified the need to employ more Indigenous peoples in the platforms, but also in government, policy making institutions and education more generally.

The findings underscored issues raised at the #CroakeyLive by Associate Professor Megan Williams, about how important platforms like Facebook can be for communities and for raising issues more broadly. But she was also concerned by the “vitriol and racism” Aboriginal and Torres Strait Islander people face online and how their voices are missing at the table of so many discussions, and from all types of media.

A Wiradjuri scholar, Assistant Director and Research Lead at the University of Sydney’s National Centre for Cultural Competence, and Co-Chair of Croakey Health Media, Williams talked about the need to create “healthy, safe digital ecosystems”, informed by First Nations voices and knowledges, such as the resources created to support the Stolen Generations by the Healing Foundation.

Chairing the session, she invited participants to respond with their thoughts to an image (see below), designed for the event by Croakey’s Mitchell Ward, in collaboration with Williams, Lewis and Sweet. 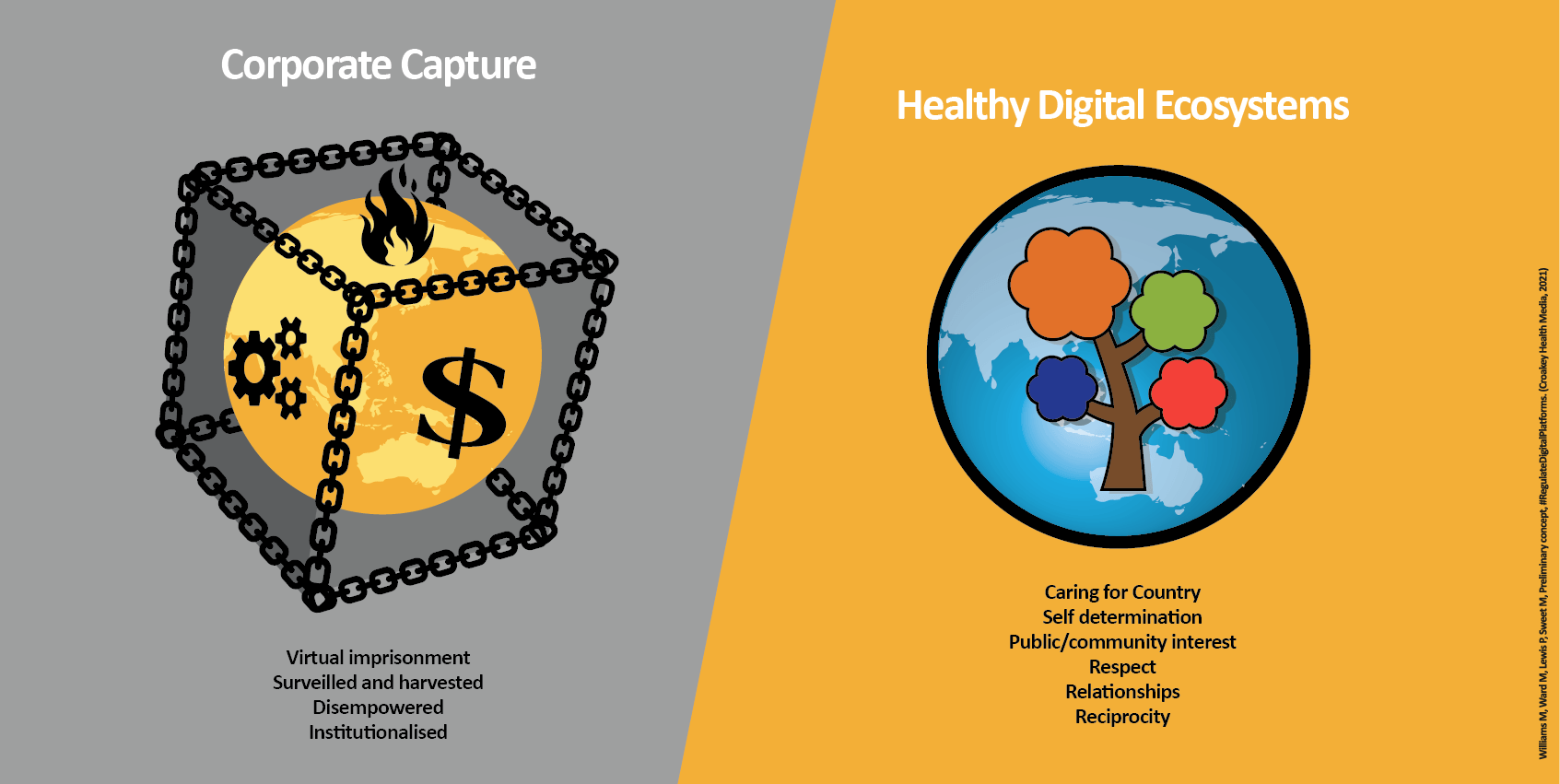 Here are some of the responses:

The thing that really captures my attention in the image is around disempowerment — often digital platforms are framed as a way to empower people but…their inherent design is largely in opposition to that.

I am also thinking it connects up the corporate agendas that undermine health in so many ways, from fossil fuel to prison industrial complex to unhealthy food systems.

We won’t move from left to right without regulation.

The first image speaks to my concern about how platform algorithms determine the information we digest and stop us from discovering other information resulting in a belief system that is artificial (and potentially dangerous) without us being aware of it.

Looking to solutions, Lewis talked about the role of the public square through time — a space created in societies and communities, including by the Greek and Roman empires, where people gather to share ideas, mediate differences and make sense of the world.

With the advent of the digital giants, we are instead “creating a public square that is toxic”.

“Facebook is never going to be the appropriate home for a civic network,” he said of its surveillance business model and engagement-at-all costs algorithm.

“It’s not a public square, it’s a private mall.”

In The Public Square Project, he said the Centre for Responsible Technology has proposed a publicly funded social network built on the trust and reach of the ABC, “in which we reimagine public broadcasting as public civic infrastructure”.

The aim would be to create:

The work is now leading to a new publication. Lewis invited input from public health experts about appropriate policy responses that will allow us “to create a safer civic infrastructure for us to share our truths and mediate our differences”.

I am greatly concerned from a public interest journalism perspective that Google and Facebook have struck deals to promote or favour certain outlets.

I would like to get people’s thoughts on how to engage the public health community more, because it seems to me that there are a lot of health groups who just don’t see this as part of their core business.

I don’t think it’s necessarily that public health people don’t see this as a public health issue. I think it is more we are all developing our understanding of the topic and grappling with what do we want to see in this space – or more so how do we get there.

Commercial determinants of health – who else uses that and what references are there that you could share?

How could we quantify the public health harms of these digital platforms? Any research that could be done?

It would be great to see some of the health organisations bring people together for conferences, publications etc in this space.

There are grants around innovative health research, maybe being able to quantify the public health harm would be a good topic?

Marketing is just one of the aspects; also need to look upstream and wider issues.

This is an area currently under scrutiny and change. All actors within the system are flagging the current model isn’t working so change is inevitable and this is why I think we are currently at such a crucial time to be pulling together stakeholders with a health and human rights mindset to try and influence this inevitable change in this system.

Love this conversation – it instils hope. And that is something short in supply at present.

Would be great to see a cross sector meeting to work together on shared understandings re terminology, concepts, range of harms, solutions – also to be alert to potential unintended consequences of policy reform.

Yes, some interesting articles around re unintended consequences; eg enabling authoritarian regimes to silence dissent on platforms as ‘regulation’.

Need to break up monopoly power. That is the underlying health issue.

Anyone creating a startup social media company is now doing so with the end game of being bought out by a tech giant NOT to make the world a better place.

We hear a lot of talk about improving digital literacy, or maybe digital media literacy, which is really putting the onus in the wrong place in a way on individuals to understand better the information they’re receiving when we should actually be looking at creating a safer environment for people.

We’ve tried to break out of our silos, including trying to reframe our messaging and how we talk about this issue of digital platforms and their influence on particularly children’s health. I’ve worked in tobacco, alcohol and obesity prevention, but to bring us all together is very powerful. I also feel like taking a child rights approach is also very powerful, something that does appeal, and it’s difficult to push to the background.

There’s such a dichotomy here around, from a public health perspective. We want to use this as a communication tool and it’s so important, and yet the commercial determinants of health and the digital power and influence are so overwhelming.

A useful article I found in my reading list which contributes some shared thoughts on the subject.

Join us in further discussions via Twitter at the hashtag #RegulateDigitalPlatforms 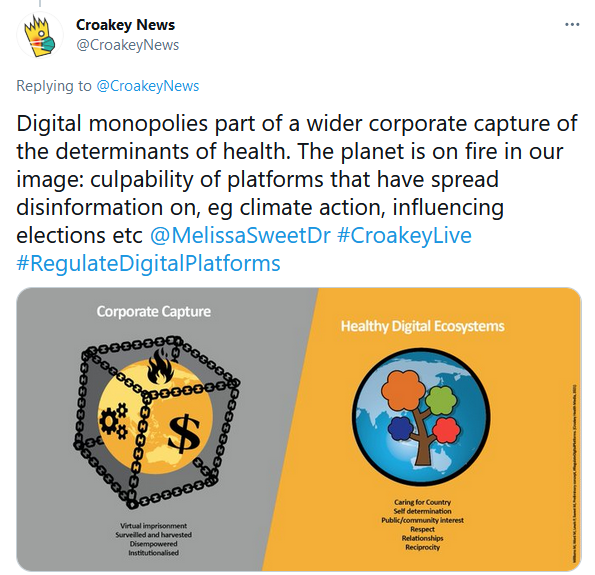 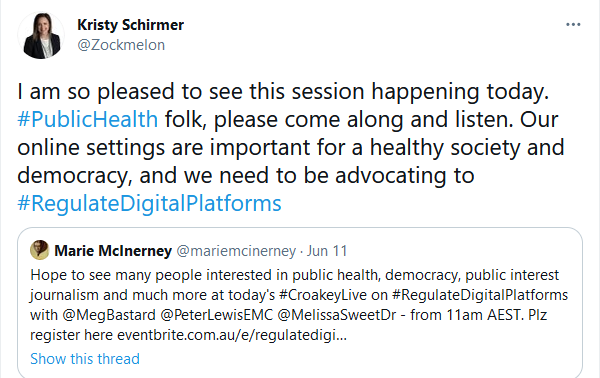 See Croakey’s archive of stories about digital platforms and health.