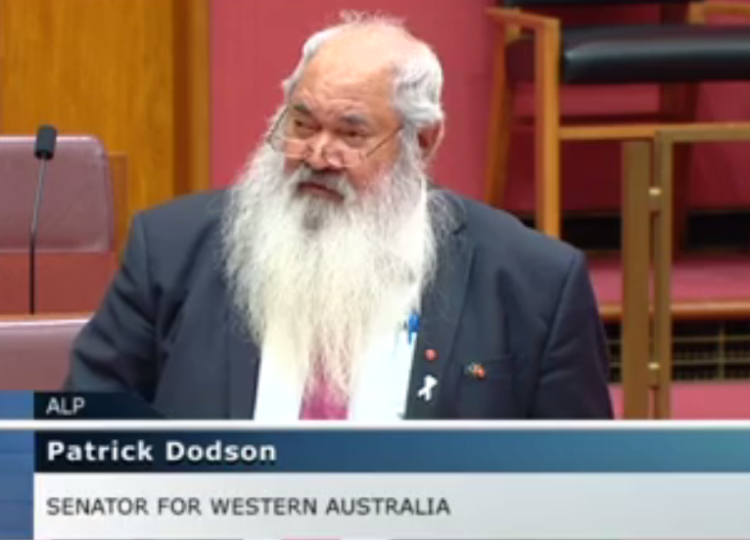 “Bigotry is back in favour”: Senator Patrick Dodson on proposed changes to S18C

Croakey readers may be interested to read in full Labor Senator Patrick Dodson’s speech during a debate on Thursday of a bill introduced by Liberal Democrat Senator David Leyonhjelm to remove part two of the Racial Discrimination Act, which sets out the various prohibitions on offensive behaviour based on racial hatred.

The bill, as Guardian Australia explains, goes further than a separate private senator’s bill being promoted by arch-conservative Liberal Senator Cory Bernardi, which would remove the words insult and offend from section 18C of the RDA.

Dodson is, of course, a Yawuru man from Broome in Western Australia, Senator for Western Australia and Shadow Assistant Minister for Indigenous Affairs and Aboriginal and Torres Strait Islanders.

You can watch him deliver the speech here.

It’s interesting that bigotry is back in favour. Back in 2014 when Abbott Government sought to repeal 18c of the Racial Discrimination Act to allow for all sorts of things to travel under the guise of free speech, it was defeated and Labor would be opposed again to this particular amendment that’s being proposed by Senator Leyonhjelm and others.

At least Senator Leyonhjelm as a libertarian appears to be committing himself to a push because of principle, but I’m not sure whether that’s the case in relation to the Turnbull Government.  To me it represents some weakness. The bill put forward by the members goes even further than the Abbott Government ever did in trying to repeal part IIA of the RDA in its entirety.

As I say this is something Labor Party could never support. We created this part of the Act and we’re proud of it and we will continue to defend it.

Labor opposed the changes to the Racial Discrimination Act in 2014 and again we will oppose them in 2016.  We’ll stand shoulder to shoulder with the communities across this country which is something people on the other side seem to forget.

This is about human beings – people of different cultures who are Australians, who have all sorts of different ways of interpreting English. English has its own form of tyranny – and that tyranny is what causes wars, assaults, arguments and violence and the speakers who grow up with English have to understand that’s not the only frame of reference through which world is interpreted because there’s no clear definition, it seems to me, of what constitutes whiteness and the culture of whiteness.

We talk of all sorts people who make up the Australian nation; Chinese and Indians and Lebanese, all sorts of people, Africans who are part of Australian population who bring with their cultures a richness to this nation, and instead of us moving to accept and appropriate the better things of their cultures, we seek to continuously divide and create ways to sustain divisions and sustain the denigration of our fellow Australians.

I was born before the 1967 referendum and we weren’t even counted in the census of this country as Aboriginal People, when this government didn’t have any power to make laws for Aboriginal people because it was excluded by crafters of our constitution in 1901.

The whole battle for recognition for freedom to enjoy the basics of being a citizen in this nation had to be fought for by black and white Australians … Jessie Street and Faith Bandler and many others and what I see today is the ideological creep back to bigotry and to racism.

It’s fine if you sit in some leafy suburb and never rub shoulders with people who battling to interpret and navigate their way through modernity in this land of Australia with its highly sophisticated culture and its complexity of protocols and procedures and social ethos.

We have to understand that today is not the day to be changing this section of the Racial Discrimination Act. It’s not the day. We see every night on the news the bigotry and the racism, the hatred the killings that take place in Middle East borne out by different interpretations that people extract from words. You only have to look to Indonesia –  just recently the President was coming here to Australia he had to curtail his trip because of the alleged words used by one of the Governors that offended sections of the community and that matter is still afoot.

So words do matter and how we use words is critical in the way we go about our business and the way we go about communication and have no doubts that racism is something that isn’t growing wild out there in the fields, it’s actually tended in a flower box sitting on the window sills of flats and houses and that matter is something we as all Australians should be working to get rid of so that freedom that was spoken about by Senator Leyonhjelm can in fact be enjoyed by all citizens.

If you watched the news last night our colleague the Honourable Anne Aly (spoke about) receiving death threats because of the stupidity of language used by one of our Ministers to excite some lunatic in our society to threaten violence and death to her and her family. This is what words do. It’s all very well in a debating class in a university (but) there’s no freedom out there in the mainstream when you don’t understand and comprehend the difference between debate and prejudice, when you don’t understand the difference of being subjugated to racist taunts and to denigration.

As I said we don’t debate the definition of whiteness or the culture of whiteness and nor should we. But there is something we need to pull ourselves up on and that is the age old reality of what’s it’s like to talk in the shoes of someone else who is different, diverse and has a richness of their own culture, when we talk about them, when  we write about them and when we print things in relation to them.

Freedom is a very treasured thing and it starts with defending as has been said in an ideological sense, the rights of people, but with rights comes responsibilities and in a complex multi-cultural society let’s stress also the responsibilities to note that other Australians do not see things entirely the way we might from a Eurocentric position or from an Anglo Celtic background or sense of tradition and culture and polity. So it’s important when we’re debating these matters to understand that many Australians are not sitting in the chamber, they’re listening to this chamber and they’re taking the leadership of this chamber as the litmus test of what this nation stands for and if this nation cannot stand up for the weakest and the poorest and those who are most vulnerable because of their race, their ethnicity, or their beliefs then we have become a very sad replication of what democracy is all about.

There’s no need for this particular amendment. There’s been over a 20 year period where this has operated substantially to the benefit of our nation.  The defences available under (Section) 18D are clear and are there not only to facilitate the freedom of speech that people which to exercise and the freedom of expression but also to give an indication of what is not permissible and how it might be mitigated or adjudicated by a court if it has to go to a court and can’t be dealt with in an arbitration.

Madam acting deputy speaker, Labor is not going to be supporting this amendment and certainly any future amendment to this particular section of Racial Discrimination Act. Thank you.