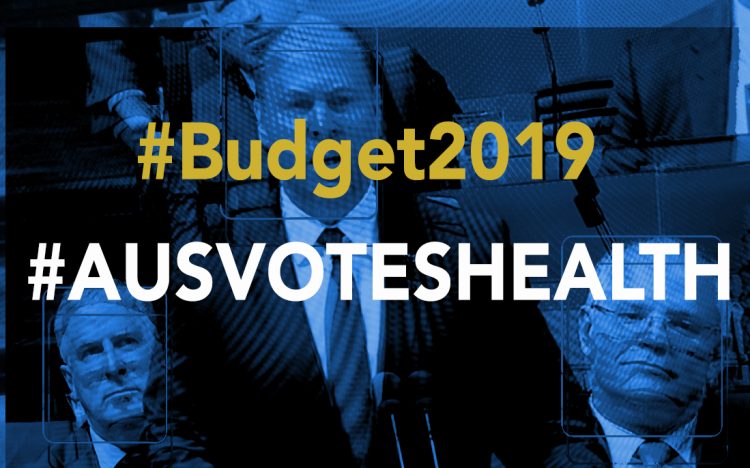 Back in Black or Highway to Hell? Major health threats ignored in 2019/20 Federal Budget

Prime Minister Scott Morrison may be ‘Back in Black’ but his 2019/20 Health Budget is unlikely to make him number one with the health sector.

While there are a few new numbers in the Budget’s hit parade, the bulk of the spending initiatives are a hackneyed playlist of old tunes that fail to deliver the reforms called for repeatedly by health groups and experts.

Below, Jennifer Doggett revisits the songs from AC/DC’s classic album to highlight the positives and negatives of this important pre-election Budget.

Warning bells are sounding all over the health sector – increased obesity levels, the health threats of climate change and record rates of chronic disease – yet the current government doesn’t appear to be listening.

Our health system already can’t cope with current levels of demand and there is little in tonight’s Budget that will relieve this pressure. Ignoring the calls from experts and health groups for a re-orienting of our health system away from acute care towards prevention and public health, this Budget provides a suite of short-term measures which barely deal with the symptoms of an ailing system, let alone address their underlying causes.

The frustration of health groups about this failure to acknowledge the looming threats to our health system was evident in many post-Budget statements, including the Public Health Association of Australia which stated that “the budget does little to prevent a future illness tsunami.”

Illicit drug use issues were one of the brighter spots in a Budget that failed to impress in most areas of the portfolio.

Under the umbrella ‘Whole-of-Government Drug Strategy’ the Government committed to a suite of measures, including $10.5m for rehabilitation services, $9.6m for increasing access to services in regional, rural and remote communities and $4.3m for family drug support.

These measures will all be welcomed by those affected by illicit drug use and should go some way towards meeting the urgent need for services in regional Australia. However, as elsewhere in the Budget there was little recognition of some of the drivers of illicit drug use or attempts to reduce drug-related harms through structural changes, such as drug law reform.

“What Do You Do for Money Honey?”

Rising out-of-pocket health care costs (OOPs) are a major barrier to accessing health care for many consumers.  OOPs can also undermine the overall efficiency of the health system by preventing or delaying access to cost effective preventive care resulting in the development of more serious problems, requiring more expensive interventions.

Despite the extensive quantitative and qualitative data showing that OOPs affect consumers across the spectrum of the health system, the Ministerial Committee on Out-of-Pocket Costs has spent over a year focussing almost exclusively on medical specialist fees.  Its narrow approach to the complex OOP issue restricted its recommendations to increasing specialist fee transparency, which is only one component of a much broader problem.

Tonight’s Budget allocation of $7.2m to support a ‘fee disclosure’ website and associated consumer information campaign reflects this narrow approach and will do little to reduce the growing burden of OOPs on consumers.

“Given the Dog a Bone”

In this pre-election Budget it was probably unreasonable to expect the Government to resist a bit of pork barrelling. After all, what’s the point of being in government if you can’t occasionally distribute some largesse to your own constituency?

Minister Greg Hunt has the challenge of seeking re-election in the marginal seat of Flinders in an environment in which his government’s loss appears to be a forgone conclusion.

Tonight’s announcement of a new ‘purpose built comprehensive cancer and rehabilitation centre’ on the Mornington Peninsula can’t hurt in reminding the voters of Flinders of the benefits of having a local member in charge of their health system.

“Let Me Put My Love into You”

If the health sector ever had any illusions about Minister Greg Hunt’s priorities in the health sector this Budget would have made them clear.  Funding for medicines, doctors and hospitals dominated the spending measures with little left over to tackle other areas of health care, including public health and prevention.

In his speech to the lock-up Minister Hunt emphasised the Budget’s support for life saving drugs (one drug he mentioned would cost patients $850,000 per year if it were not on the PBS), cutting edge medical research and sophisticated technologies, such as MRI and PET scanning. His narrow view of health care as was evident in the range of measures funded across different areas of the health sector which almost all focussed on dealing with illness and disability at an individual level.

Of course, many of these measures will be welcome.  The new $448 million primary care scheme for patients over 70 will help general practice keep up with the use of technology in other sectors of the service economy by allowing care to be provided more conveniently and efficiently.

The $1 billion for the extension of the Child Dental Benefits Schedule will address one of the most inequitable areas of health care and a major cause of preventable hospital admissions. Similarly, the mental health and suicide prevention commitments target an issue of urgent need and great community concern.

However, none of these initiatives will deliver the reforms needed to equip our health system for the future.  Overall, they continue to support an episodic and fragmented system that has failed to meet the needs of the community and ignore many of the underlying drivers of illness and disability.

While there were some positive measures in the Budget, they were overshadowed by the numerous ‘black spots’ noted by health groups in their reactions.

One of the most striking of these is the health impacts of climate change, which was MIA even in the Budget measures that addressed climate change issues. It’s hard to give a health budget a passing grade when it doesn’t even mention what the World Health Organisation has deemed“one of the greatest health risks of the 21stcentury”

Other notable black spots mentioned by health groups, such as the AHHA and Catholic Health Australia included:

“You Shook Me All Night Long”

One brighter spot in an otherwise flat budget was the new funding allocated to address sexually transmitted infections (STIs) and blood-borne viruses (BBVs).

This funding includes $20m in new investment for the implementation of the National Aboriginal and Torres Strait Islander BBV and STI Strategy, and $25m for the implementation of the National HIV, STI, Hepatitis B Strategies. It also includes $10m over two years for a national STI television campaign to build awareness of HIV and STIs among young Australians.

These welcome measures will support the prevention and early intervention of BBVs and STIs and provide support for Indigenous communities to address one of the most serious health problems facing their young people.

“Have a Drink on Me”

Public health groups agree that obesity is one of the most serious health threats to our community.  As well as increasing the risks of illness and disability, obesity is expensive.  In fact, the Grattan Institute estimates that obesity costs taxpayers about $5 billion each year.

There is good evidence from Australia and other countries that strategies that focus on individual behaviours – such as campaigns to encourage individuals to adopt healthier diets – are insufficient to prevent rising rates of overweight and obesity. This is why public health groups and experts, such as the Obesity Policy Coalition, the Public Health Association of Australia and the Stroke Foundation, have called for a more systemic approach to reducing obesity, such as a tax on sugar sweetened beverages.

Yet despite the repeated calls from the health sector for action on obesity and specifically for a sugar-sweetened beverages tax, the Budget did not include any measures targeting what the AMA has called ‘Australia’s biggest public health challenge’

The beverages industry will definitely be drinking to Minister Greg Hunt at their post-Budget knees-up tonight.

Minister for Sport, Rural Health and Regional Communications, Bridget McKenzie, was the only Minister able to front up in person to the Budget lock-up and she used the opportunity to highlight spending measures in the ‘sport’ component of the health portfolio.

Like the rest of the Budget, the handful of initiatives in this area are a disparate collection of unrelated measures rather than a systematic approach to improving the health and well-being of the Australian community through sport.

Most of the measures announced are continuations or extensions of existing programs, such as the $41m for Sporting Schools and the $42.5 for the community Sport Infrastructure Grants Program. None of them explicitly address the low levels of physical activity which are a major contributing factor to Australia’s rising rate of overweight and obesity.

Many health stakeholder groups must be wondering whether their advocacy is having any impact at all or if the Government just sees calls for health system reform and action on prevention and climate change as ‘noise pollution’ getting in the way of the ‘real’ business of health care.

There was certainly no indication tonight from any of the three portfolio ministers that after five years in government, the Coalition understood why the health sector feels so strongly that major changes to our current system are required.

Of course, with the prospect of a change of government on the horizon, the more important question may be whether the Opposition is listening to health sector concerns in these areas. Their opportunity to put forward their plans for the health system will come on Thursday when Labor delivers the Budget-in-Reply.