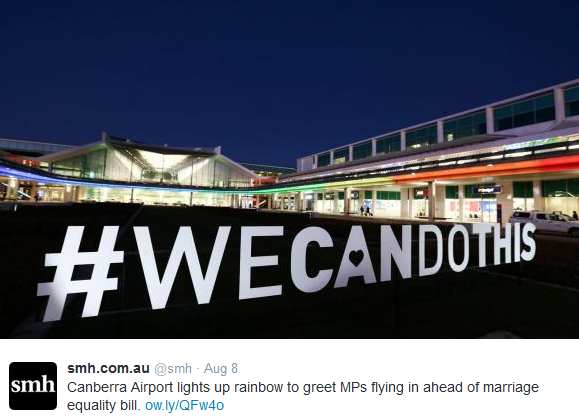 Prime Minister Tony Abbott put an end this week to hopes for marriage equality this year in Australia, with the decision by the Coalition party room to not allow a conscience vote on the issue – effectively sealing its defeat were it to come to Parliament.

Now the focus is on whether a decision might have to wait for a referendum, or plebiscite, or change of government. For some in Canberra, there will be a political cost. But for many other Australians, freelance writer Rebecca Shaw says in the post below, the cost is deeply personal.

Before I say any of what I am about to say, let me get some things off my chest.

I don’t want to get married, to a man or a woman (but especially a man). I don’t think that marriage equality should be the most discussed issue in our community. And I haven’t been someone who has dedicated a lot of time or physical energy into the cause outside of attending a few events and writing a few articles.

And yet here I sit, feeling surprisingly terrible after Tuesday night’s events, when the Coalition voted to not have a free vote on same-sex marriage. The visceral reaction I’ve had was unexpected; especially considering who we were dealing with, and that the outcome was never in doubt as soon as Abbott incorporated the Nationals into the party room debate. But an expected bad outcome does not necessarily negate what you feel about said bad outcome.

I feel disappointed. I feel sad. But mostly I feel exhausted. I am a well-adjusted lesbian in her 30s. I am comfortable, I am out and accepted, and some (most) days I actually feel blessed that I don’t have to date men. And even though all of these things are true, and even though I am totally content with my sexuality, I am still absolutely f*cking miserable at the thought of enduring another year or four of a fight for this thing that seems so simple and right.

It feels both personal and impersonal simultaneously when politicians make statements that indicate how few queer people they actually know or care about. It feels that way when they say things that make it clear that they have no idea how their actions are affecting people, or that they just don’t care. It feels personal because their decisions are directly discriminating against us, but it feels impersonal because they are not treating us like human beings with real individual lives and feelings. They are treating us like some foreign idea, like a pair of rich fashion designers from Italy, or like uni friends they once vaguely knew, forty years ago. They are treating members of our community like concepts, not like the flesh and blood humans who love their partners and children that we are.

And it’s all the other people we are made up of that I hurt for most, and that I worry about. It’s true that nobody will die directly because they don’t have the right to get married. But what else is true is that delaying marriage equality (which will definitely happen one day anyway) also delays the end of the discussion. Now, there is no end in sight. There is only the prospect of hearing more terrible things about LGTBQI people. Of seeing advertisements that say awful things. Of having to hear the opinions of homophobes, given airtime as though their opinions are completely valid. Of hearing same-sex parents be persecuted. Perhaps there will be a plebiscite, and the harmful rhetoric will be ramped up, a raging torrent of horrible views. This can all only be damaging to queer people who will have to endure it.

Additionally, there is now only the possibility of campaigners and activists and allies and queer people having to once again take up the fight. There is only a diversion of resources, time, energy and attention being taken away from helping at-risk youth, homeless kids, and trans people. All of that good that could be done to help and save people will be poured into fighting for something that most of us want, that most of us know is right, and something that will inevitably happen at some point anyway.

It is frustrating, it is hurtful, and it is so incredibly exhausting.

And I am saying that, as a happy lesbian in her 30s who doesn’t even want to get married. If I feel like this at the thought of hearing more awful things and seeing debates about my humanity, I wonder what other people might be feeling. I am concerned about what impact witnessing the government’s actions yesterday will have on the hearts and minds of vulnerable queer people everywhere. I am concerned about what the clear subtext running under the decision, that some people will never consider us as equal, could have. What this overwhelming sense of futility might bring with it.

If someone like me can’t even bear the thought of the now-seemingly endless debate, what of closeted teens in regional Australia, of which I was one once? I know the feeling of being terrified, and I know what the dangerous effect homophobia and intolerance can have. I know what it is like to feel like an outsider, to feel that you aren’t equal, that you aren’t worthy of respect. What might this do to those who aren’t secure in themselves and their place in the world? What about the vulnerable people that will now be ignored because this marriage equality fight will keep being fought? These are the people Tony Abbott isn’t considering. I desperately don’t want to stand by and watch them become collateral in this pointless and petty play.

Rebecca Shaw is a Brisbane-based freelance writer, columnist, and co-host of comedy podcast Bring A Plate. For dumb jokes and angry rants follow her @brocklesnitch. 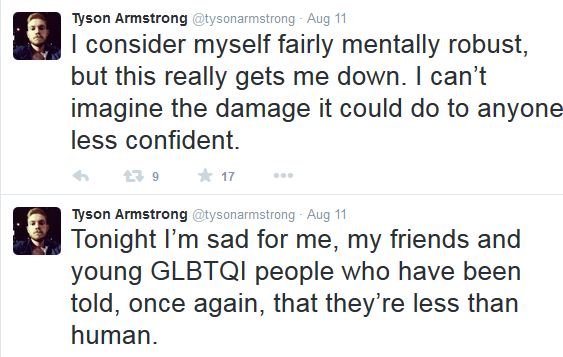 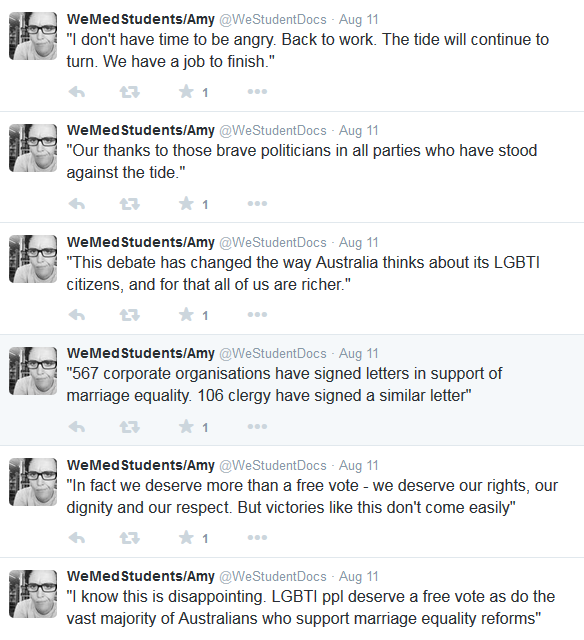